First off, let me apologize. I really make an effort to get reports up every time I get out but this season I have completely shat the bed. Between work, travel, life and fishing I've been scrambling. I really do enjoy sharing and helping you guys catch more fish.

That said, I know there's a lot of guys on here that are still trying to figure this stuff out. Post your questions on this thread and I'll do my absolute best to help you out.

We started around the 289 in the AM looking for some popper fish. My buddy is a popping and jigging fool. We weren't disappointed by the show. Spot after spot of 40-120# bluefin. They didn't' really want to bite but we managed 3 hook ups and only landed one including losing a nice 80# fish close to the boat. 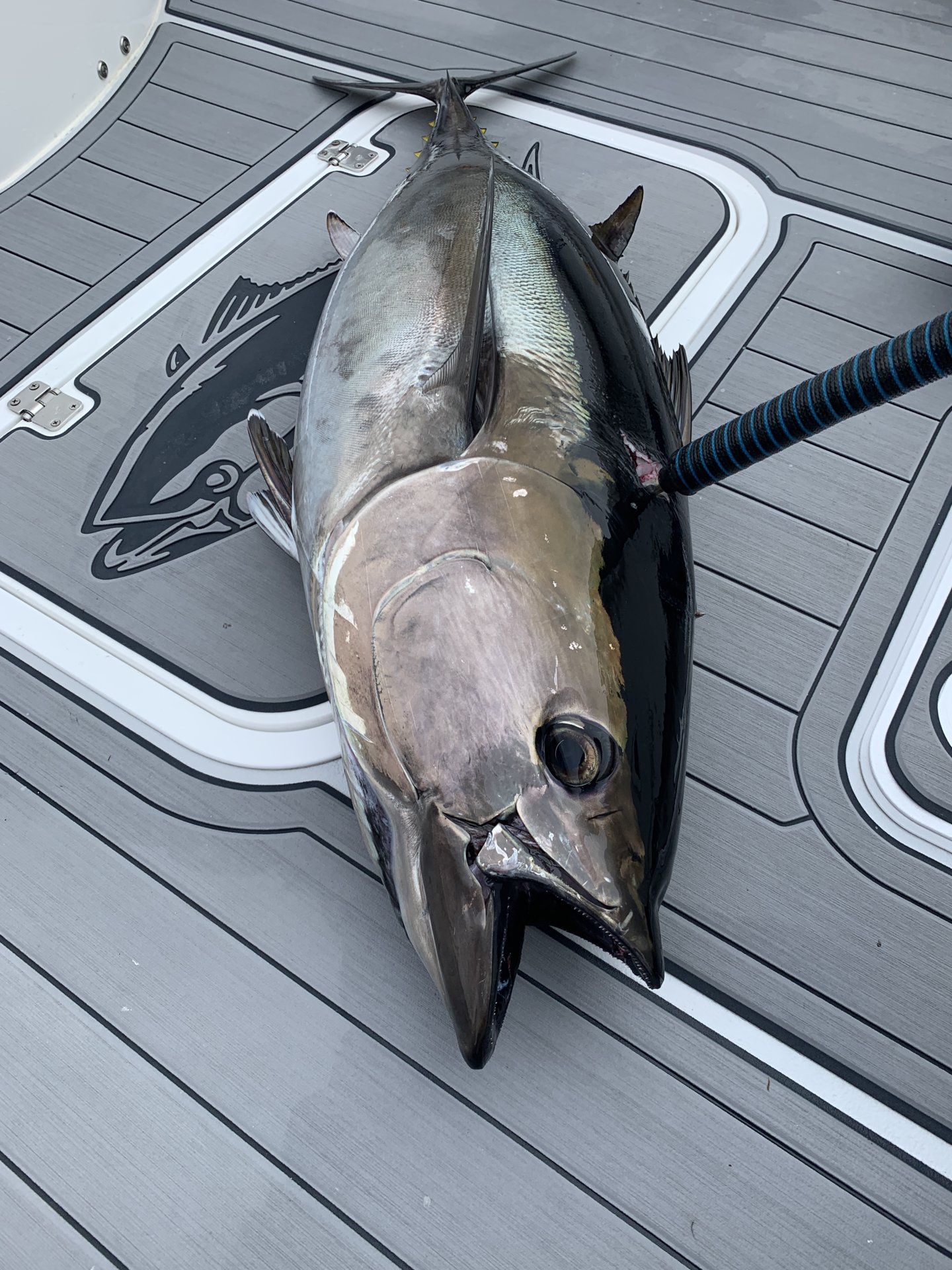 We got them on the new Nomad Riptide 95 Long cast in Ghost and on large 10" Custom poppers.

Around 2pm we decided to check out the big fish grounds. Got a tip from a buddy and rolled into the zone. I like to go troll speed with the autopilot on while we set the kite and balloon up and get the baits rigged.

Metered a couple of fish but no major mass. Once set up I motored around a bit, found a couple of really good schools and then set up, up wind of the fish, and put the kite up and it didn't take long. While "walking" the bait out I'm bit in under 3 min. Come tight and put my buddy to work.

After about a 45 minute battle, up comes a beautiful 168. Gaff, drag aboard, take pics and back to work. 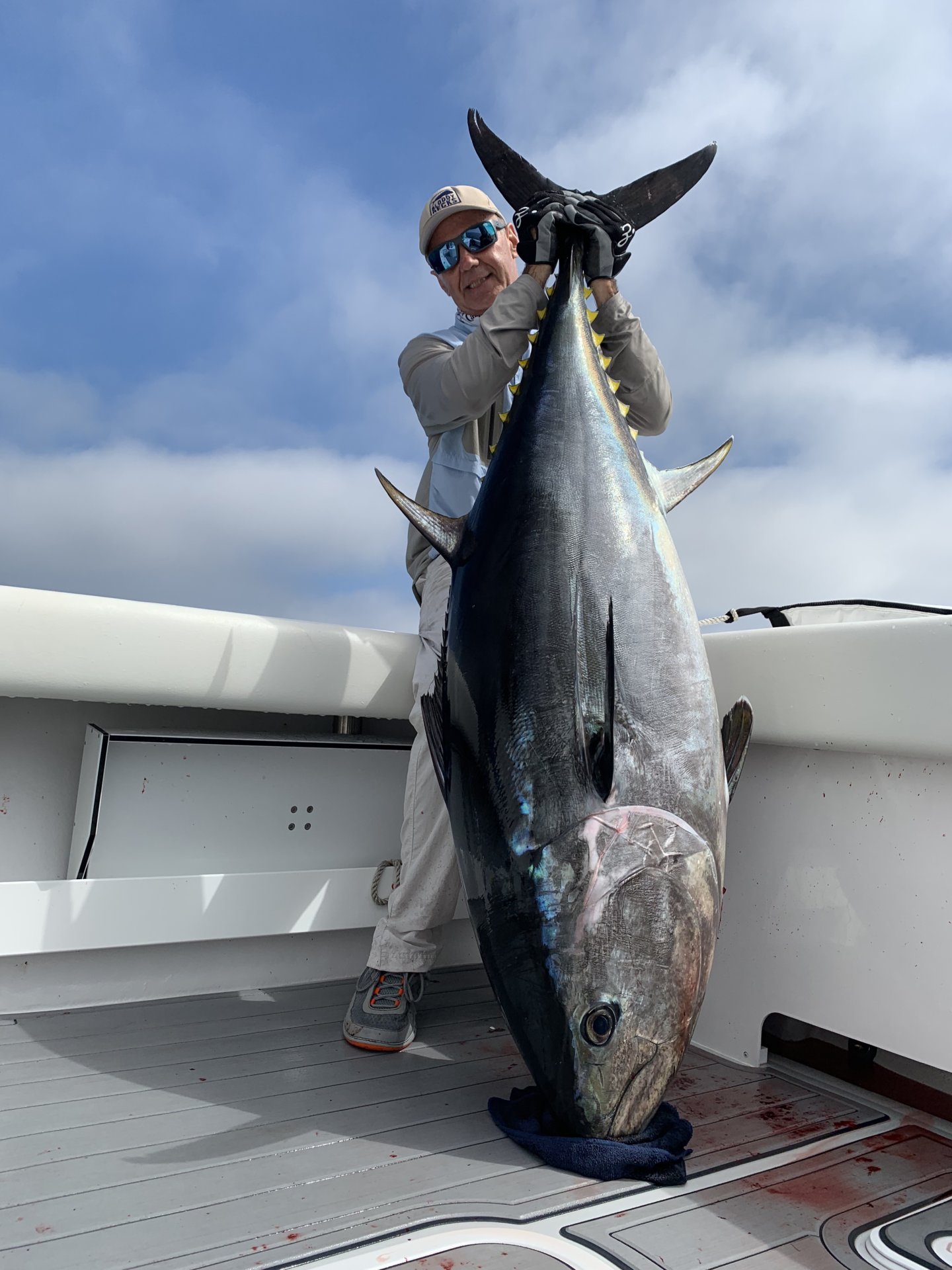 Same deal, find marks, go upwind and put the kite and bait out.This one took about 10 minutes to get a bite. 15 minutes later a 100#'er comes over the rail. 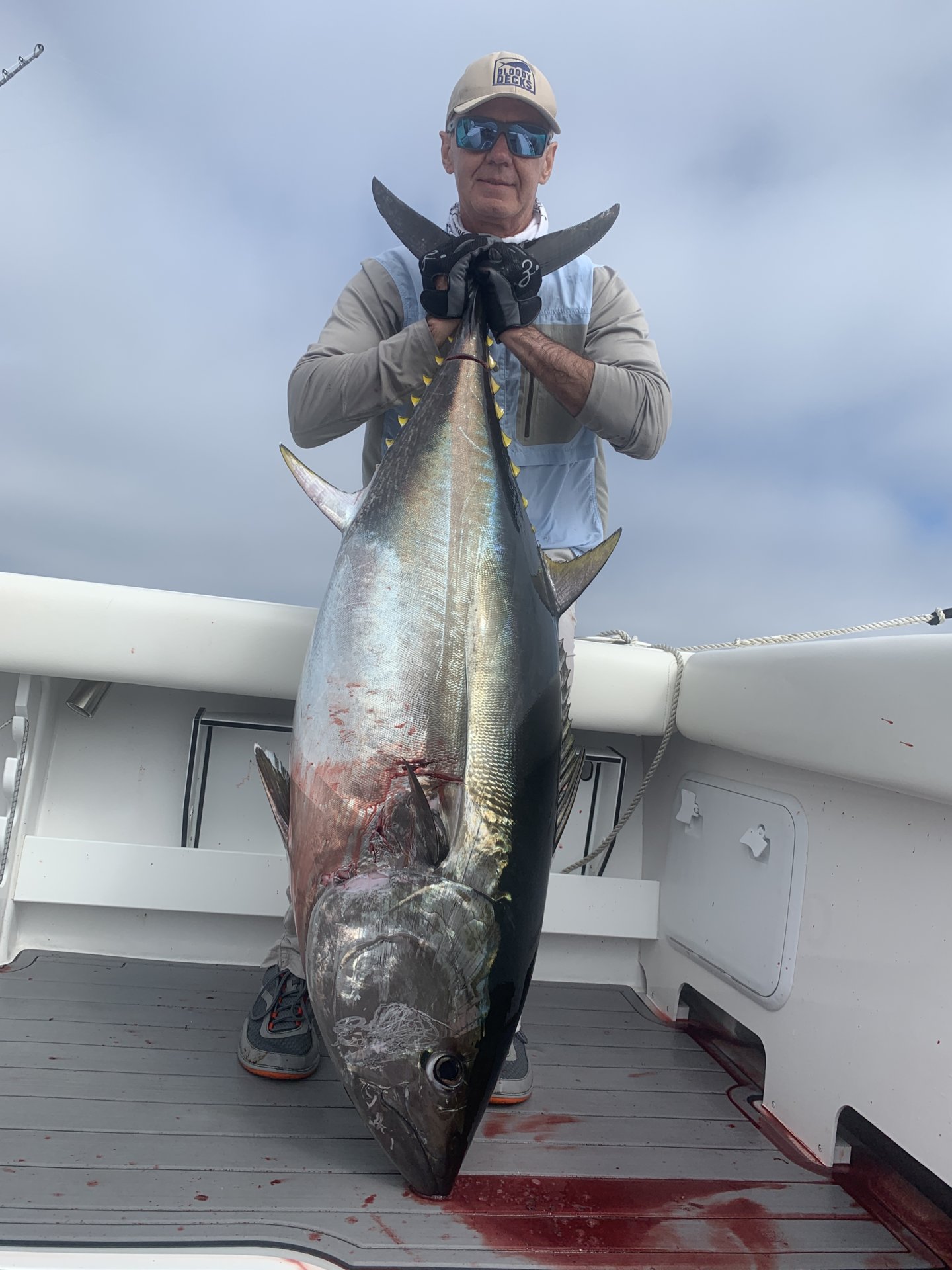 We're shocked by how easy the bites are coming and we have room for one more. Rinse and repeat. Put the bait out and not 5 minutes later, "we're bit".

This one was a big bastard. We saw the blow up and it acted accordingly. All of the 225+ fish we have caught stay up on the surface for most of the fight and you can really tell it's big by the big head shakes and tail beats.

An hour plus later it's at leader and won't budge. This is where we have changed things up this year. We always fish 300# leader and have started to leader the fish. DON'T TRY THIS if you are inexperienced but for us it gives us the ability to really control the fish at the end game. Smooth as silk, one gaff int he head and one in the belly, game over. 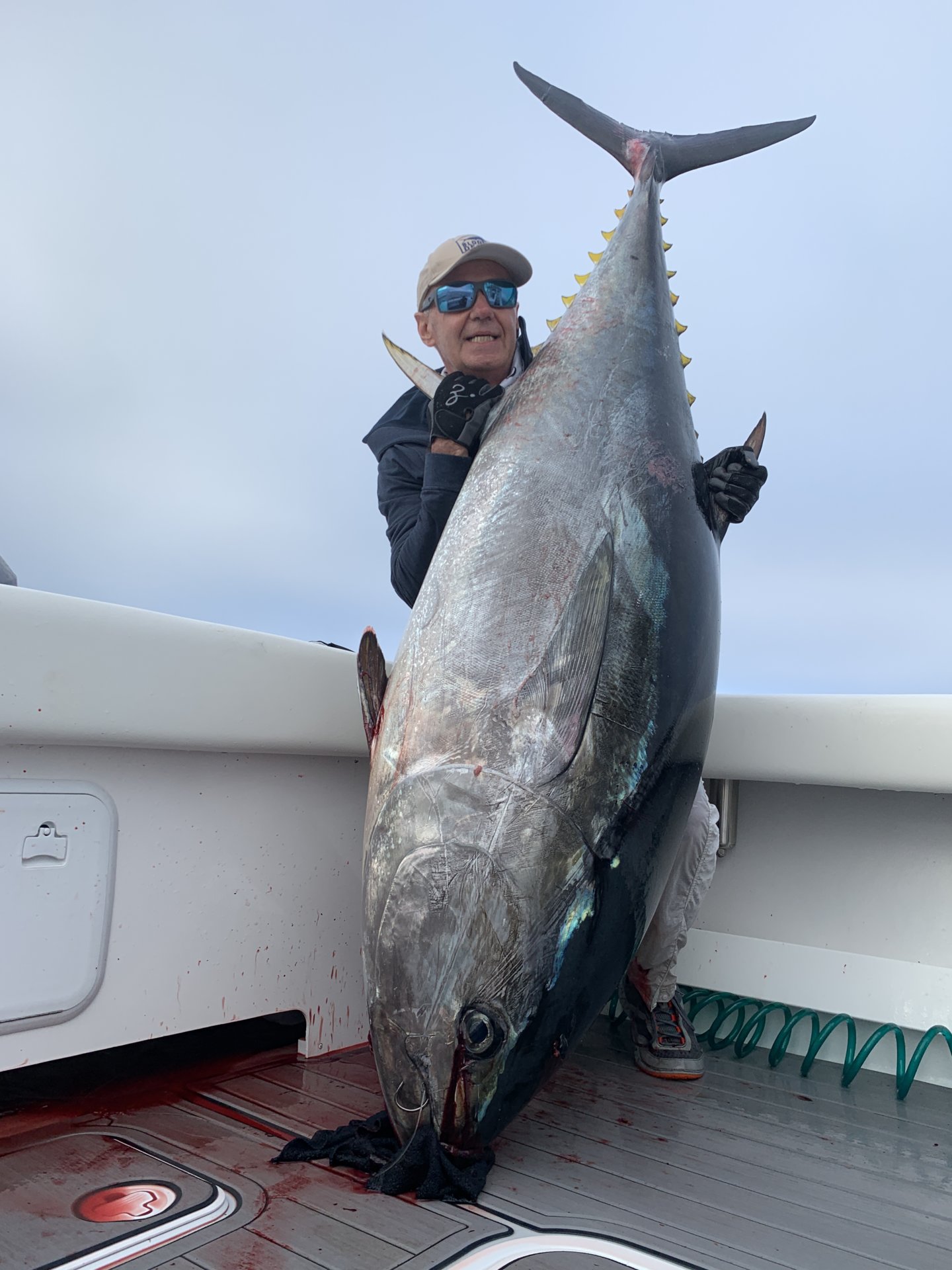 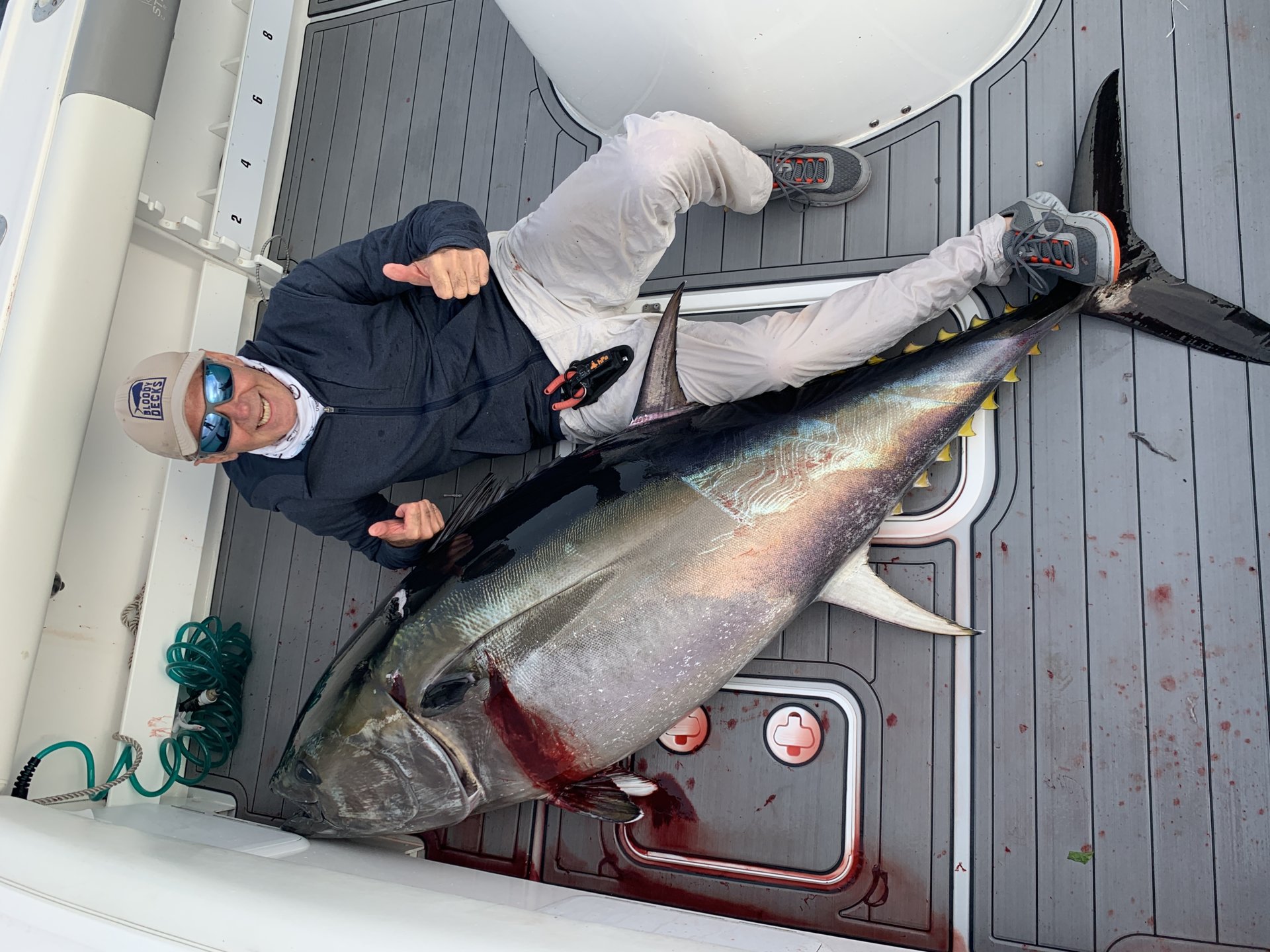 Things that are working well: (***some of these companies are sponsors , but I won't recommend shitty gear or companies)

- dead G Fly Flyers - I really got on the dead flyer program this year. I'm still shocked as to why these fish won't look at a live bait or a lure but they will go bonkers for a big, stinky mullet with wings. They work. 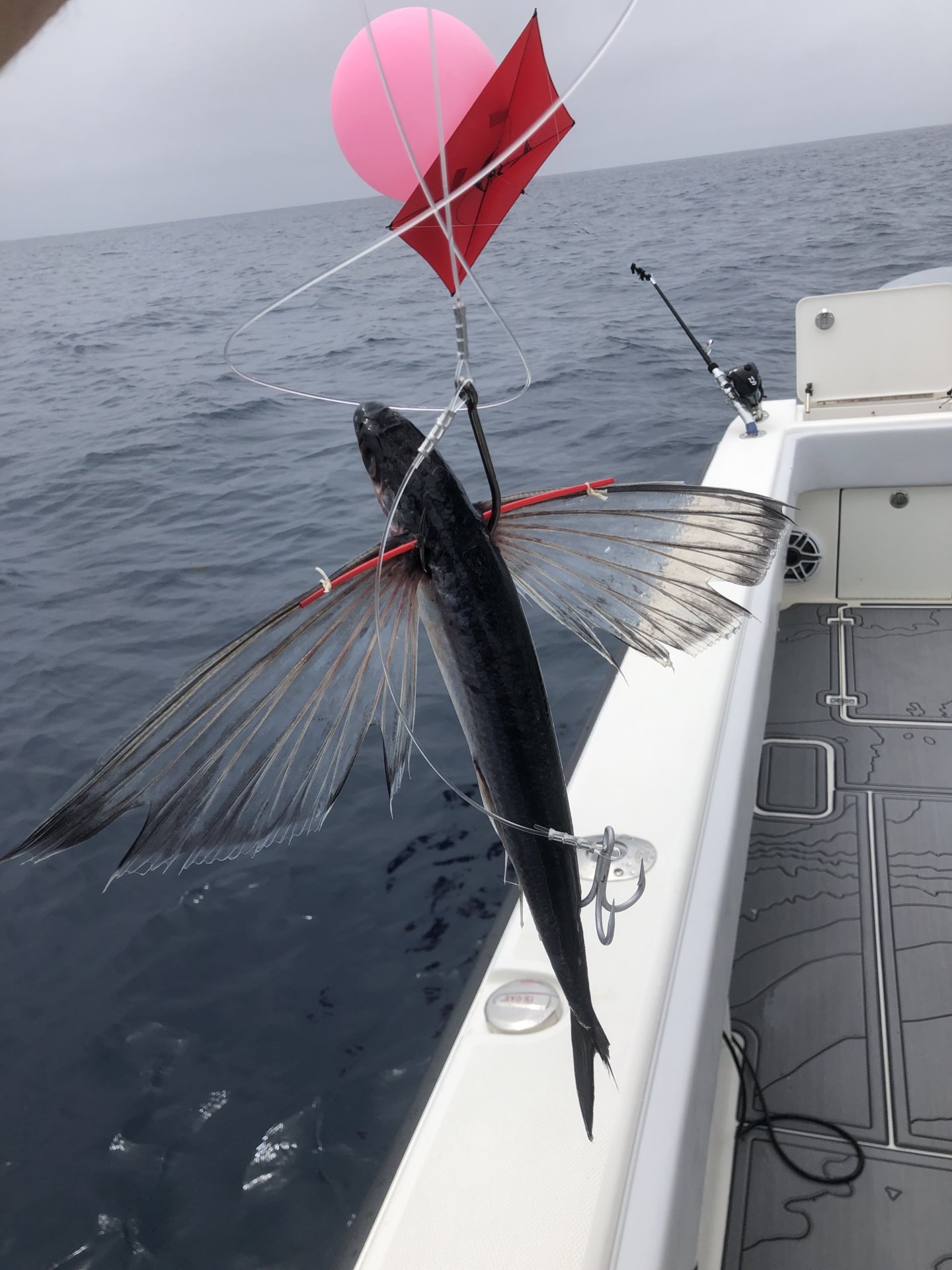 - Kite/Balloon rig - SFE Medium and Low wind kites with a 36" balloon rigged to it.

- PENN International 50VISX with 130# Seaguar Threadlock Braid - We have one reel that has over 50 fish on it and has never been serviced. These new Internationals are workhorses and the best big game reel IMO.

- Electric Kite Reel - if you don't have one, get one. Be sure to use a safety line!

- Sounder - Learn to use it. Learn to tell what size the fish are you're seeing. Generally a bigger mark is a bigger fish. Big marks with long tails = Giants. 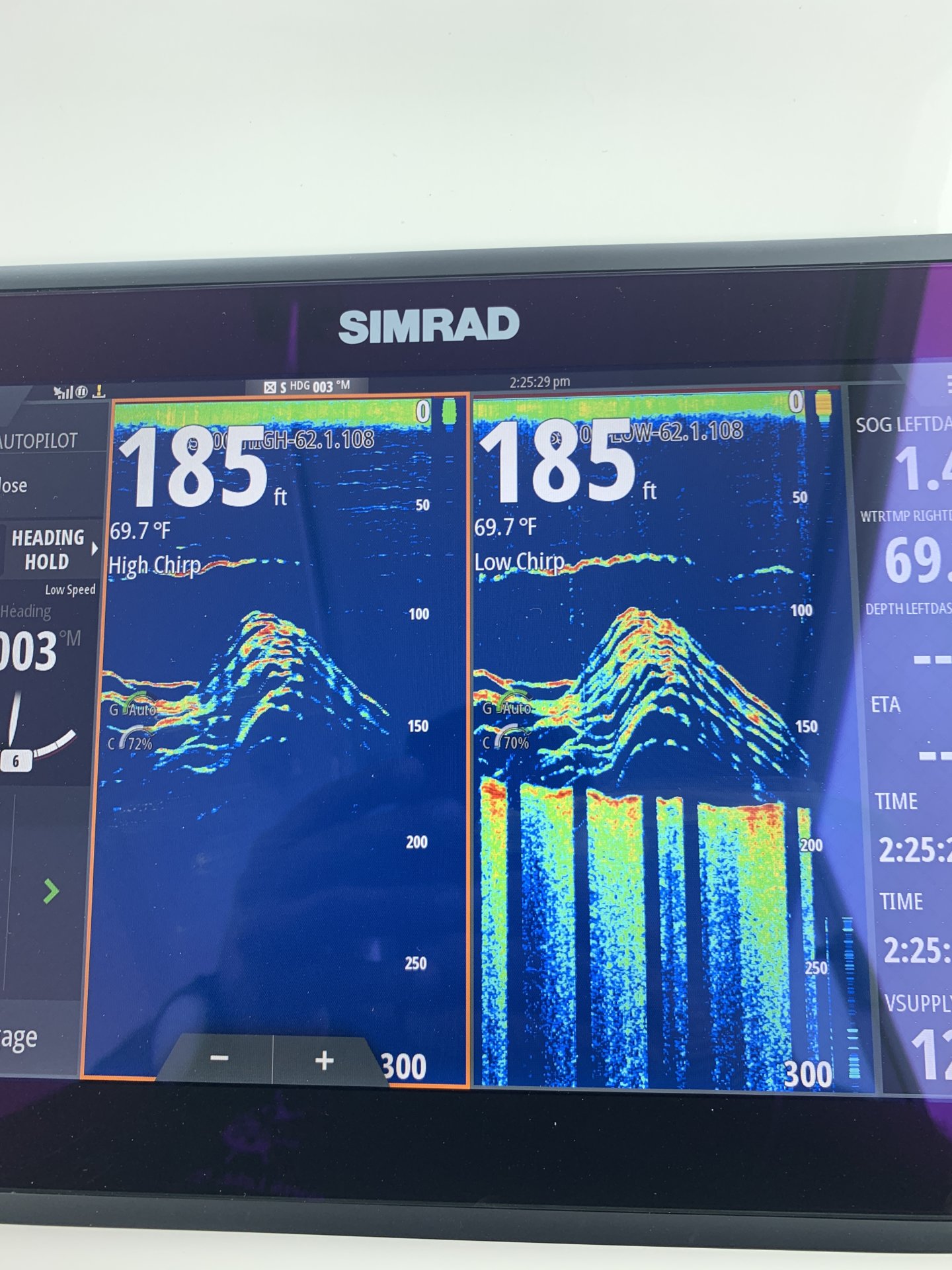 - Don't fish where the fish aren't - So many guys just go out and troll or Skip. These fish are easy to find and ID on the sounder. If you don't see them on the surface or the sounder, move on and don't waste valuable time.

Good luck out there guys. Watch that weather next week. Looking like a nasty blow for a while.
Reactions: T.Bui, LTBOLTMAN, vegasandre and 114 others

You showed how little I know with BFT fishing.
Reactions: Capt Devo

If it has a wire i work on it!

Boat
Bring it on Mako 25

Q? What Transducer are you using
Reactions: Capt Devo

Thanks for sharing...did you end up selling the old boat???
Reactions: Capt Devo

Outstanding! I just want one of the big uns.

Are they only biting the flyers? Where do we get these?
Reactions: Capt Devo

Wow! Awesome report and info thanks for all the details
Reactions: Capt Devo

Good to hear from you!! Nice fish!
Reactions: Capt Devo

Congratulations! And an outstanding example of a clean, readable report!
Reactions: Capt Devo and lowyder993s

Those big BFT are retarded fish, I casted a live sardine in the full on foaming fish and they wouldn't touch it but they swallowed a stinky frozen flyer.
Stupid ass snowflake BFT.
Last edited: Sep 13, 2019
Reactions: Triggerfish, Capt Devo, mtb_prodigy and 2 others

mmonti said:
Outstanding! I just want one of the big uns.

Are they only biting the flyers? Where do we get these?
Click to expand...

Thanks for the report! Saw you today at menya but didn’t want to be rude and interrupt!
Reactions: Capt Devo