We left the dock in SD around 7:00 AM with a plan to fish the small stuff and then run to the island for bigger stuff.

We got to the bait barge and were told the bait was fresh that day loaded and it showed. Most of it was in rough shape as soon as it went into the tank.

We pushed West and found a paddy way short of the zone that went full WFO on 10-15 lb yellowtail. We caught all we wanted and kept 4 for the table. That was fun we haven't stopped on a paddy in forever, forgot how fun it was.

We kept going West to the Zone the entire world was fishing (easily 100 boats spread out) just inside the 226 . We got the area by 8:30 or so (40 knots does not suck) and found two huge flottillas of boats. Not wanting to deal with that we made the decision to split the two fleets and push west. While running we metered a decent school, I threw bait and it stuck to the boat. The school was a real mixed grade with fish from 20lbs up to 80lbs. They didn't start blowing up on the chum right away, it took a little for them to get with it but we knew they stuck with the boat so we stayed on it and soon enough they got with it and started to blow up and eat the hook baits. We couldn't get the bigger ones to go but the 25-40# fish bit really well.

We called in a some people with angler limits on board and the request from the boat owner to start releasing fish when a Sea Hunt decided to race right into the chum line and set up directly down swell in the chum where the fish were blowing which completely shut the bite down. Ok for us but we felt bad for the people we called in. Fish were still there but now refused to bite.

At this point we decided an easy day without getting home at 1 AM sounded nice so we bagged the island and took our half hour ride in and were at the processor dropping fish off at 12:30.

We haven't fished that smaller stuff in years it was really a blast to just fly line baits for a change.

What worked best was 30# fluro to size 2 Mutu Hybrids or Mustad Demon 2/0 circles.

We didn't get a sniff on the sinker rigs, jig or poppers.

Sorry for the lack of pics, when we were offloading I realized we hadn't taken any. 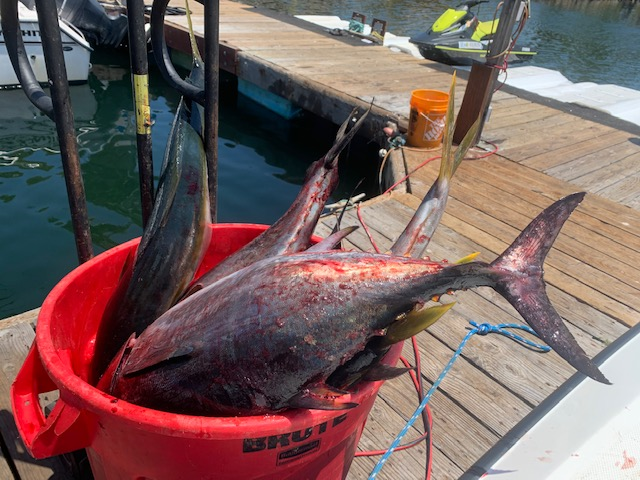 Congrats on a fantastic day of Tuna fishing!
Toggle signature
Thanks for your report. Hook up! Cory
Upvote 0
Show hidden low quality content
You must log in or register to reply here.