Late report, but thought it would be better than nothing. Went out on the Point Loma on both 7/11/21 and 7/12/21 targeting bluefin.

Found many breezer schools that boiled on chum, bite wasn't hot but I got four bites that day. Let the fish run with the bait for a few seconds before closing the bail, but got cut off on three of them and broke off one of them due to tight drag. Wasn't quite sure if the cut offs were due to offset circle hooks or letting the fish eat too long, but I would start closing the bail instantly after getting bit the next day. Boat ended up with 8 bluefin for 16 people.

7/12/21:
Fished flyline sardine the whole day. Retied the 6000 Stella with 15 ft. of 50 lb. mono leader in case I got cut off or broke off again, as the bluefin did not seem too picky and were hitting 40 lb and 50 lb on the previous day. Similar bite on this day as the previous, hooked up on the first stop on 30 lb., but got cut off despite closing the bail instantly after getting bit and not allowing the fish much time to take the hook deep. Switched to the Stella, which I had set at 15 lbs. of drag the first day and turned the drag down to about 8 lbs so I would have less chance of breaking off if the line was nicked by the fish's teeth, and managed to hook and land a 55 lb. bluefin (top picture).

Got another hookup on the Stella, but got cut off even with 50 lb. leader, so I retied the Certate with 50 lb. leader as well and began fishing very low initial drag to allow the hook to settle to the corner of the fish's mouth before putting alot of tension on the line, and it was easier to change to drag on the Certate quickly compared to the Stella, only half a turn from about 3 lbs. of drag to 10 lbs. of drag.

We changed spots and I hooked up quickly at the new spot on the Certate, turning up the drag from 3 lbs. to 10 lbs. after the fish began making its initial run and was able to land a 64 lb. bluefin (bottom picture) after fighting it for about 20 minutes. After that fish, I hooked up again within 15 minutes on a 30 lb. fish and landed it. In total, I caught 3 bluefin and the boat caught 19 bluefin for 14 people.

All of my hookups were within the first minute of soaking lively baits, I didn't manage to get any bites on the long soak. Because many of the boils were far away from the boat on these trips, I think the key to getting bit was casting a lively bait close to the fish, which worked out well for me because I was using spinning gear.

Overall, it was a great trip for me and Captain Chad and Deckhand Matt were very helpful in finding biting fish, as well as clearing tangles and helping land fish. Some important lessons from this trip for me are to close the bail immediately when bit on spinning gear, and to use inline circle hooks next time, both to prevent getting cut off by the fish. 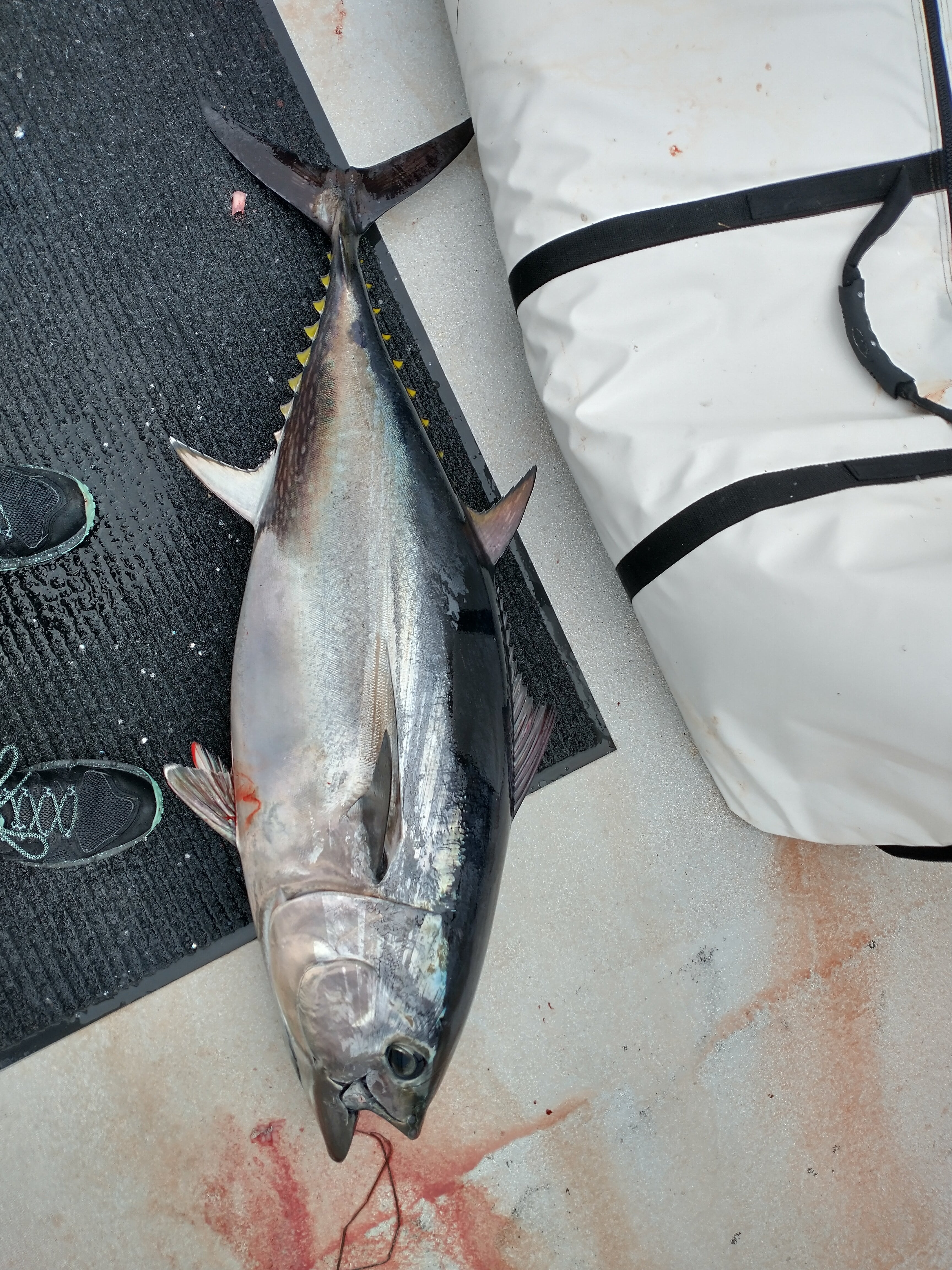 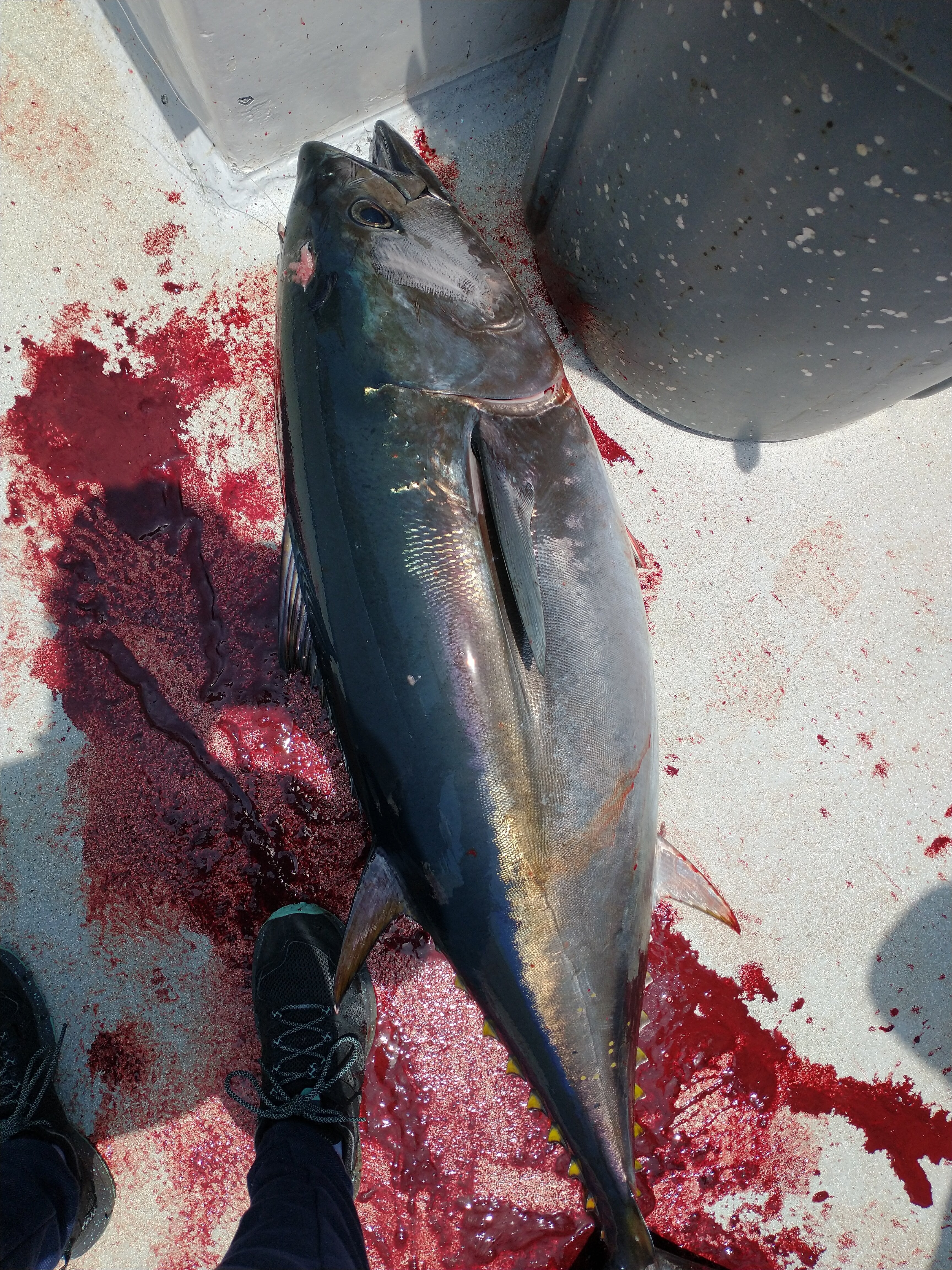 The point lomas crew is one of the best. Chad knows what he is doing. Good job on the fishy!
Upvote 0

Great Report and read, and NICE FISH on the Coffee Grinder

I think 1/0 Circle Hooks are the way to go. The only time I use them are on Tuna but they work.

Good job, very good read! I agree about closing the bail fast and letting the line come tight, these fish aren't nibblers. But remember that in addition to the teeth you have very rough pectorals and tails. I believe that a lot of the "bite-offs" are actually "rub-offs" and that is all about line abrasion resistance.
Upvote 0