Late report but it didn’t take a rocket scientist to know the BFT were biting this weekend.

After loading up the car and getting gas we got in the water just before 5:00 AM. Launch was pretty busy but it almost seemed like we were in between two big waves of people (more on that soon). Headed to the bait barge and waited about 10-15 mins. It was moving surprisingly quick since they were running both sides because the line was long when we showed up. Right as we were getting bait, we realized we forgot the kite, give that we knew there were cows around we headed back to the ramp. Get back to the ramp to see it crazy busy (the second wave). Ran to the truck grabbed the kite and caught up to some of the boats that were just behind us in line so we were happy with the quick timing we made. Coming out of the Harbor things started to get a little more interesting, swells were probably 5-7 feet. Had my buddy driving as I tied up some rods, which was pretty fun to do while I was literally getting airborne at times. Got about half way down to the 302 and got into some pretty fishy water. Bird schools all over clearly cued in on schools but nothing breaking so we waited a bit and finally threw out the troller. Within about 2 mins of throwing it out we got hit and my co-captain made quick work of it. Get the fish to the side of the boat and it comes off, he thought it was a bonito so we weren’t too worried. Move back towards the birds and throw the troller back out. We get hit again and this time I let my buddy (Matt) who’s not an avid fisherman by any means take it. He gets it in and its officially his first BFT. He’s stoked but claims he likes bonito fishing more since they are more fun to fight.

We decide to motor down a little further, and see a few boats and more birds so we throw the troller back out and move around looking for marks. After an hour or so of that we start to see the entire fleet building the parking lot so we head that way. We troll around a bit over there and decide to set up shop just outside of them so we can mess around with the kite and fly line some bait. It’s our second time fling the kite so it took a little bit to set that up. Meanwhile, Matt had a dean out on my Avet SX that has 25# braid to a 30# floro leader. After about 15-20 mins he gets bit. We were marking some fish so my other buddy throws in a dean and starts the long soak. Another 10-25 mins go by and then he’s hooked up. We now have two fish hanging and I’m standing around holding a kite rod so I decide to reel in and throw a fly line out.

Matt looks like he’s struggling so I put my MXJ in the rod holder, set it to bait and throw on the clicker to check on him. As I’m hanging out watching Matt, my reel starts screaming louder and faster than I’ve ever seen so I run over and set the drag. As I pull the rod out of the holder, I notice the handle is spinning which obviously isn’t a good thing so I hold the handle and watch line peel out stupid fast. Within 10 seconds of getting bit I’m looking at maybe 50 yards of braid so I button down the drag all the way and start to crack as quick as possible. I end up pooping the knot and reel in an entire spool of line. My guess is the fish that bit was probably in the triple digit range because it blew out the anti-reverse on my MXJ while I was in bait so it had to bring some serious pressure quick.

Johnny is now pretty close to getting his in and I focus on running the gaff for him. Its been about 45 mins and Matt still has no progress but were seeing color on Johnny’s. Finally, Johnny gets his up and I get him gaffed and on the boat.

Matt is now about an hour and fifteen or more into the fight and we’ve drifted a fair amount. We hang out and watch him fight throwing a fly line in and pulling it out occasionally but were basically just killing time and making fun of him. Three hours in and he starts muscling the fish in. after seeing color a few times and watching him run back to 100 ft Matt finally brings him up. I miss the first gaff and admittedly was just trying to get a gaff on him so he didn’t run again but recover and get him in the side of the head. Matt was more than excited to see his fish and couldn’t believe the size.

It was about 3:30 and we moved north a bit since we figured it would be a wet ride in. There was another parking lot closer to the 9 mile and we set up shop there for 20-30 mins but we were pretty ready to call it. Headed in for thankfully a decent ride in and got on the trailer by 5:30. Everything was great until we got to La Jolla and the wheel bearing on the trailer decided to blow out. I don’t know if anyone has had this problem but this is the second time on the same side so were thinking it’s an axel issue at this point.

When we finally got home, we weighed the fish and came out at 11# for the troller, Matt’s was 47# (gilled and bled) Johnny’s was 56# (gilled and bled). Was a great day of fishing and got a few firsts checked off the list so we couldn’t have asked for more. 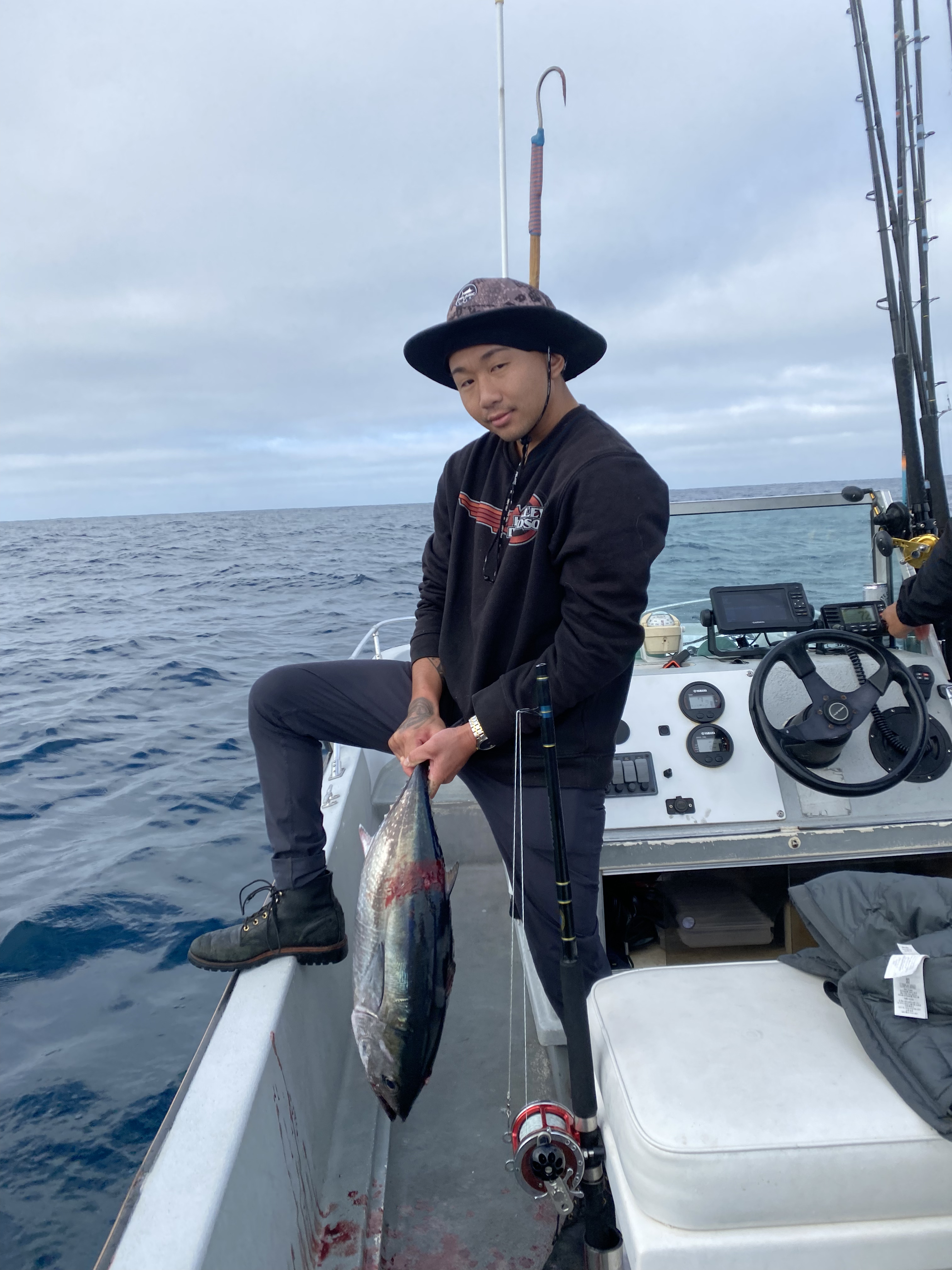 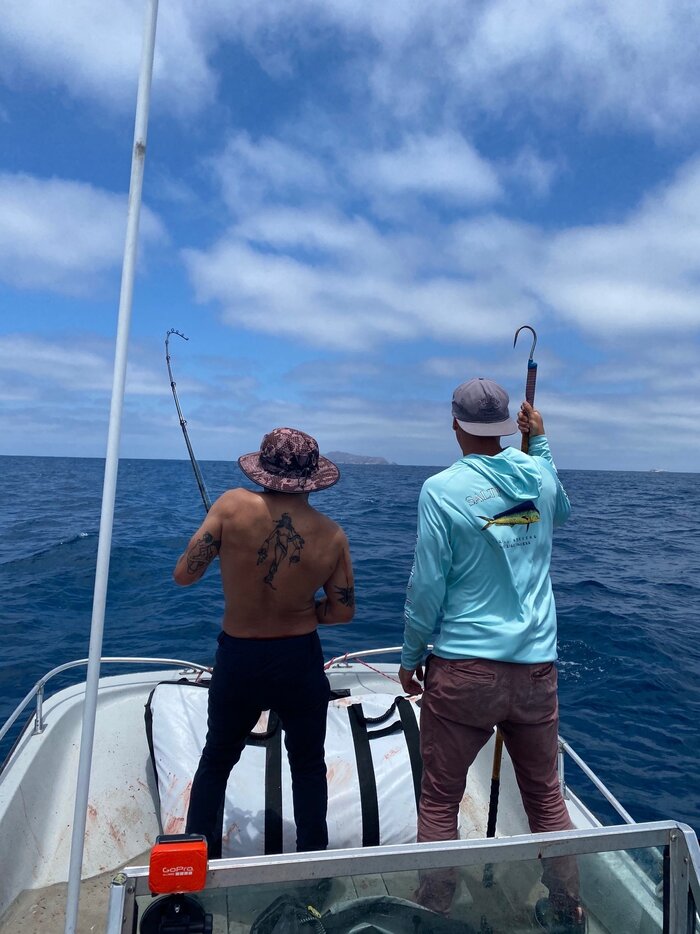 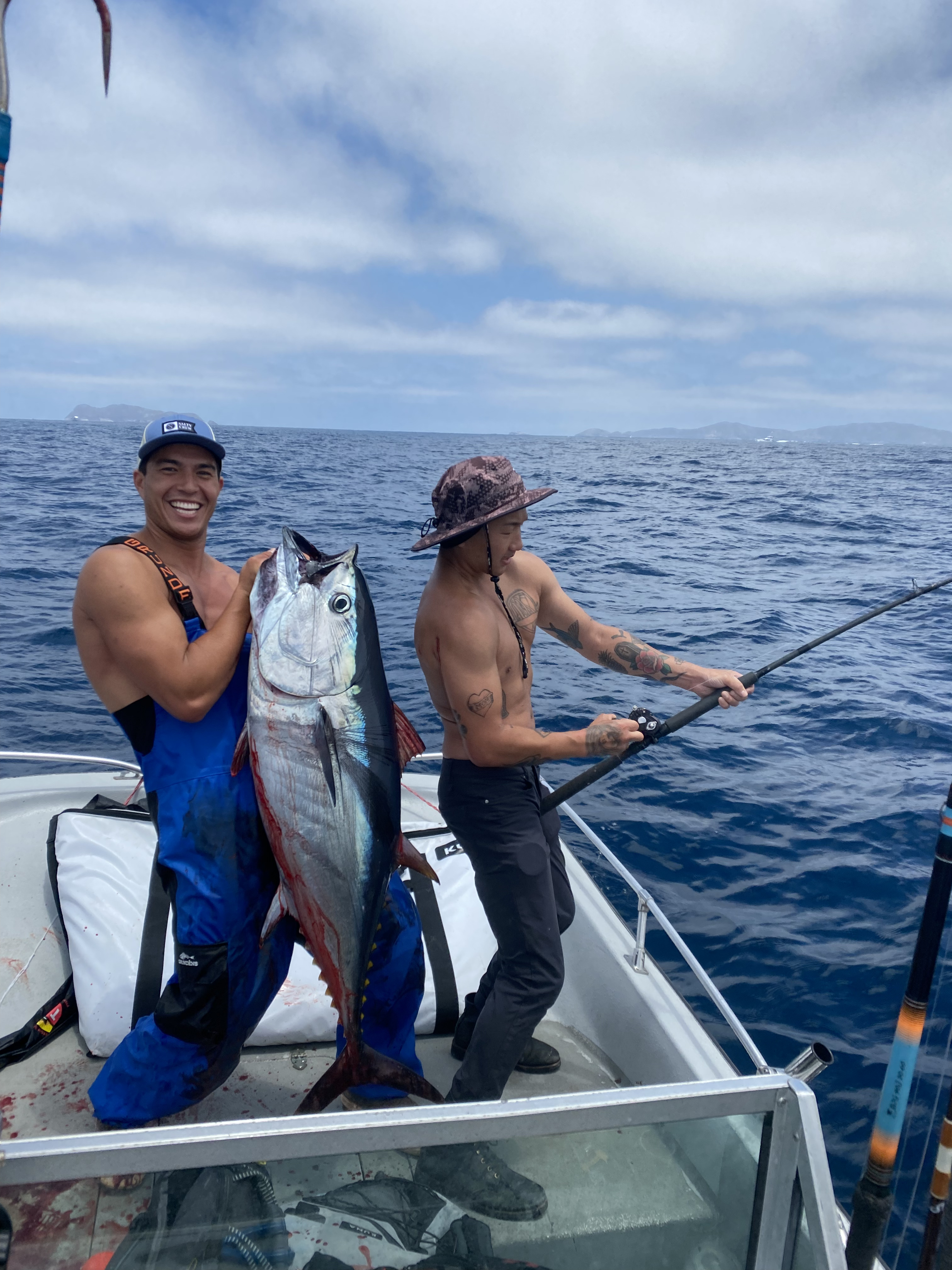 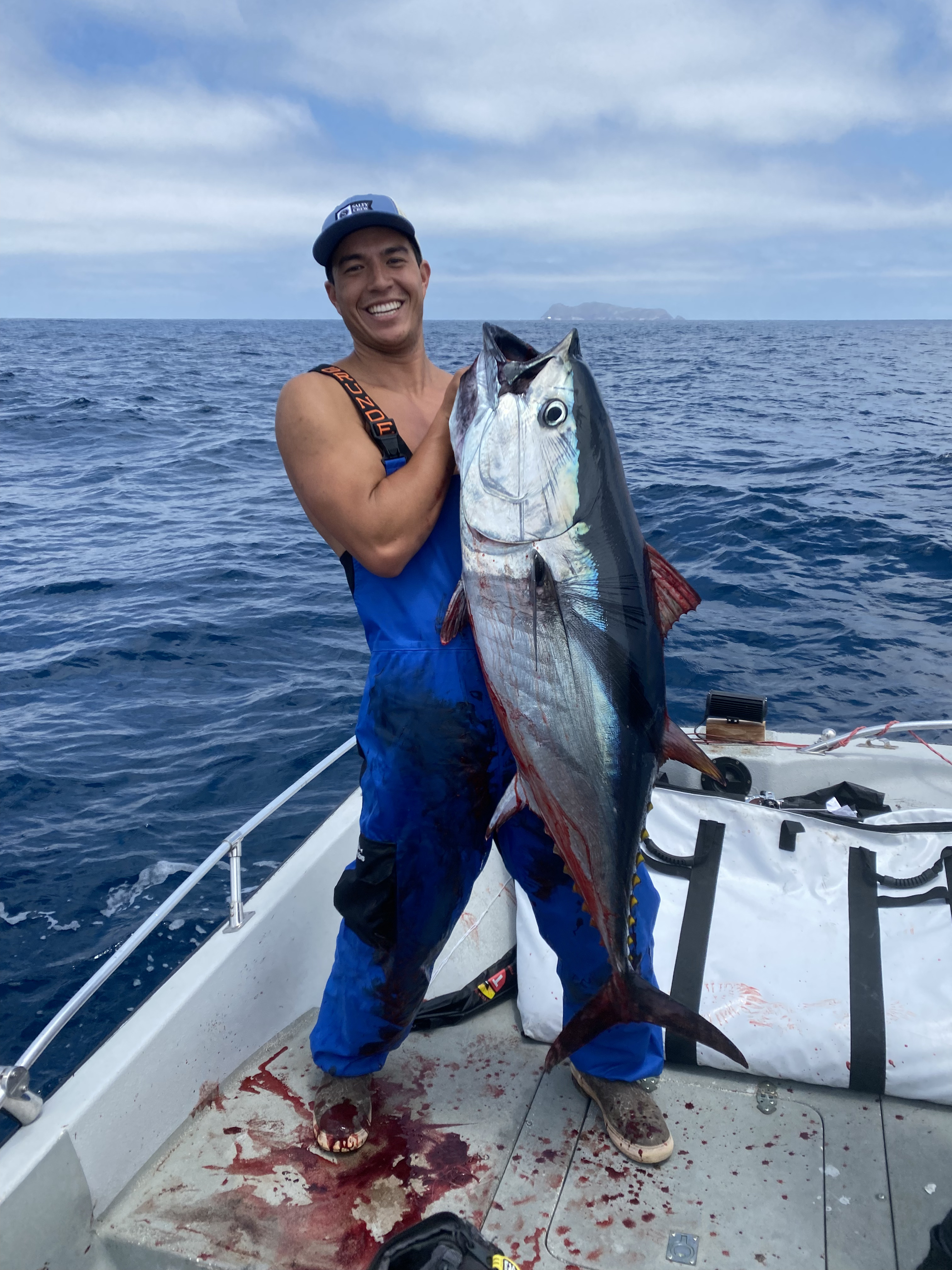 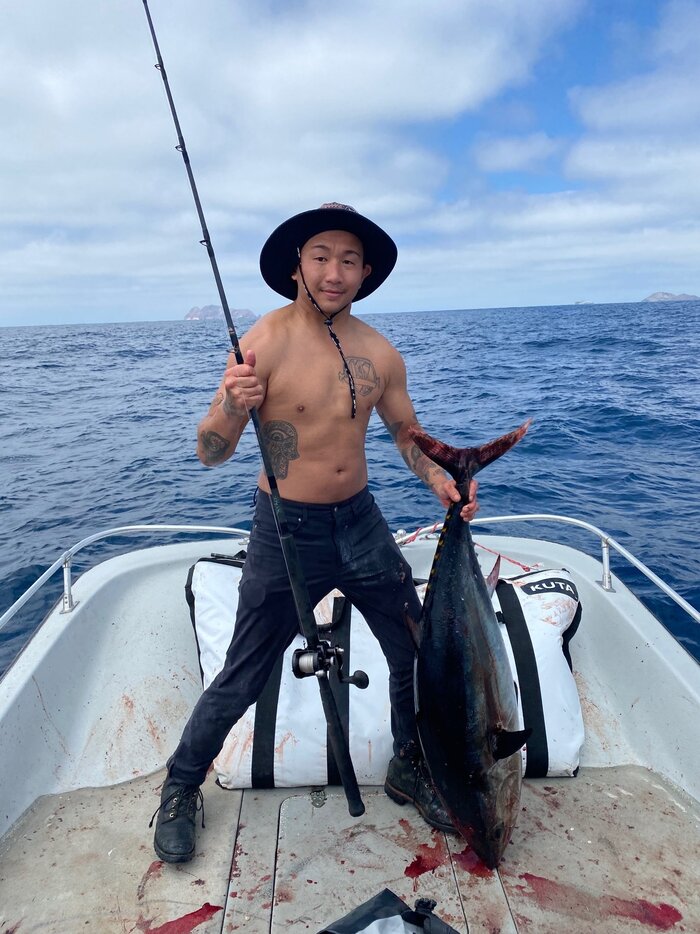 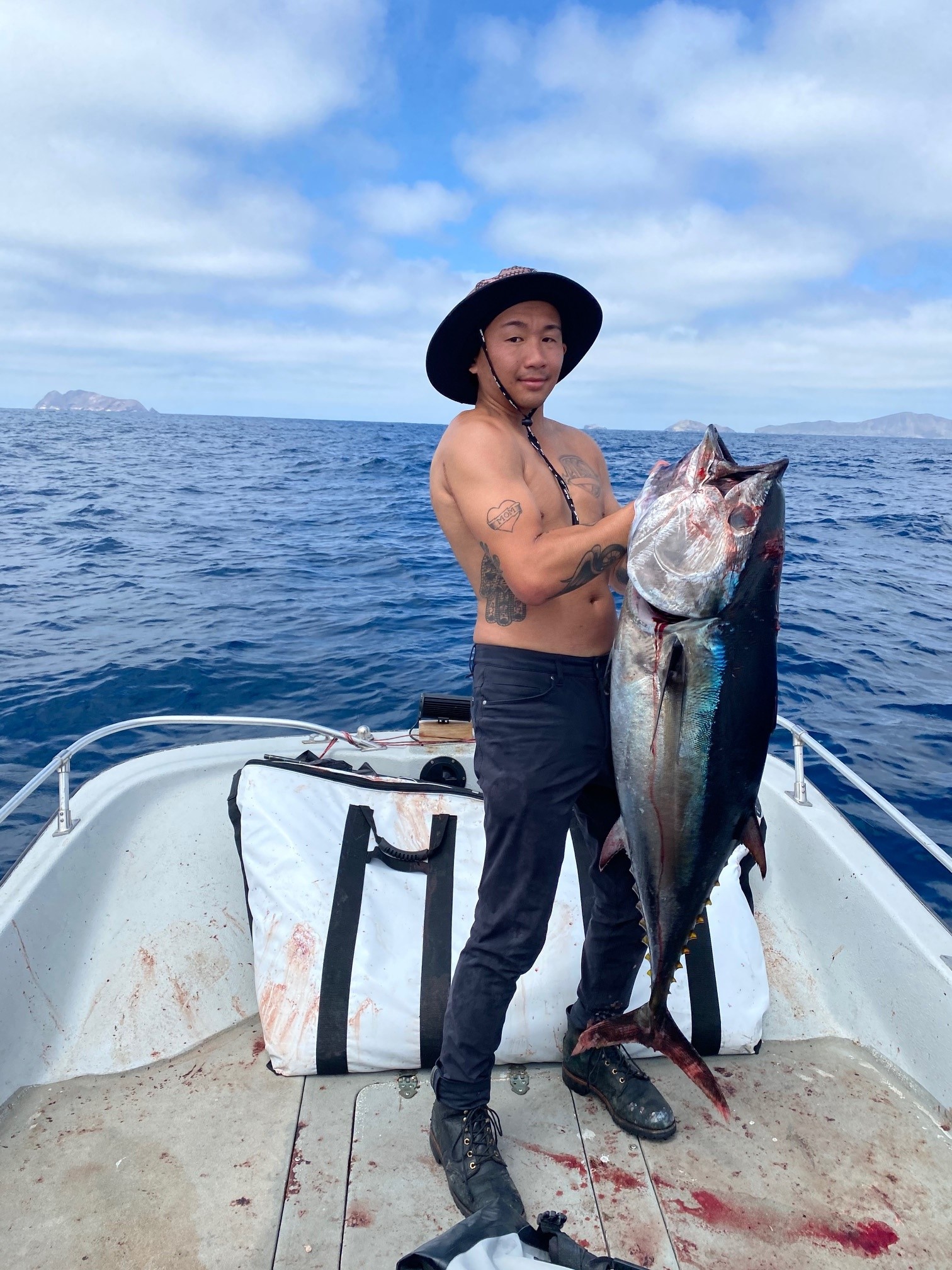 Nice fish! What were you trolling? Cedar plug?
Upvote 0

Very nice, thanks for the report.
Upvote 0

Fabulous report. Thank you very much. On a scale of 10.....that was a 12. Please report on your next adventure.
I never knew wheel bearings had a mind of their own but if you say so that's good enough for me.

Toggle signature
"When beholding the tranquil beauty and brilliancy of the oceans skin, one forgets the tiger heart that pants beneath it; and would not willingly remember that this velvet paw but conceals a remorseless fang." H.M.
Reactions: SuperPutt
Upvote 0