Sorry guys, I posted this in the wrong section earlier this morning.
Fished with my son and friend David yesterday. First stop was the 371 got there around 6:30, lots of birds working, saw some BFT's puddling around the area but didn't have any luck getting them to go. Did manage a small Mako that once hooked gave us a little air show which was cool. Had some nice guy on a boat called "Tight Lines" run over our lines and strip about 50 yards of spectra off my reel. Clueless. After that decided to make a move. Headed south.
About 15 miles south/south East of the 371 we ran into the fleet. Trolled around for a bit and saw many of the sport boats with their kits up and drift fishing. Found a spot close enough but far enough where we would not be "That guy". Put up our kite and a nice mac, had four lines off the windward side of the boat 30#, 40# and 50# rigs. We were metering fish 40 to 90ft. You can see example in pic. So we used the rubber band method with our rigs to get our baits down. 3 and 4oz sinkers did the trick holding them down. Unfortunately during our drift we were not paying enough attention to the kite and it got bit, but think it was a shark or seal...clean with just the head left.
After about an hour into our drift a smaller CC off our bow hooked up and was in for a battle. They drifted close enough that we were able to talk to them. Apparently hooked up on 20lb. They stayed around us and I did my best to keep our lines and kite away from them so we wouldn't be the reason they lost the fish. They took turns handing the rod back and forth to the three of them. We watched them for about 35 mins and got the fish close several times. Unfortunately they lost the fish, don't really know what happened but you could see the defeat in their body after it was over. Been there and done that.
We decided to put out some lighter lines to see if we could manage a bite since we were not seeing much luck. Within 10 mins of having my 20# in the water I was on. Lasted all of 35 seconds and almost spooled me, I had to put some thumb pressure to try and turn the bastard. No luck. Snapped off. My buddy David did manage to get a small blue shark but that was it for us this day.
We saw plenty of fish being pulled over the rails of the big boats. If I were going in the next couple of days. Find the fleet and set up using 30# with 3 to 4 oz, chum the heck out of the water once you see them on your sounder.
We moved once and tried flying the yummy...looked great but no luck.
Weather was a little snotty in the afternoon. So we left heading back in hopes of finding a paddy with YT. No such luck. The further north we went the water temp got cold. We were fishing in 67 degree water...by the time we got to the islands it was 64.
Hope this helps some if they are heading out over the next few days. Good luck. 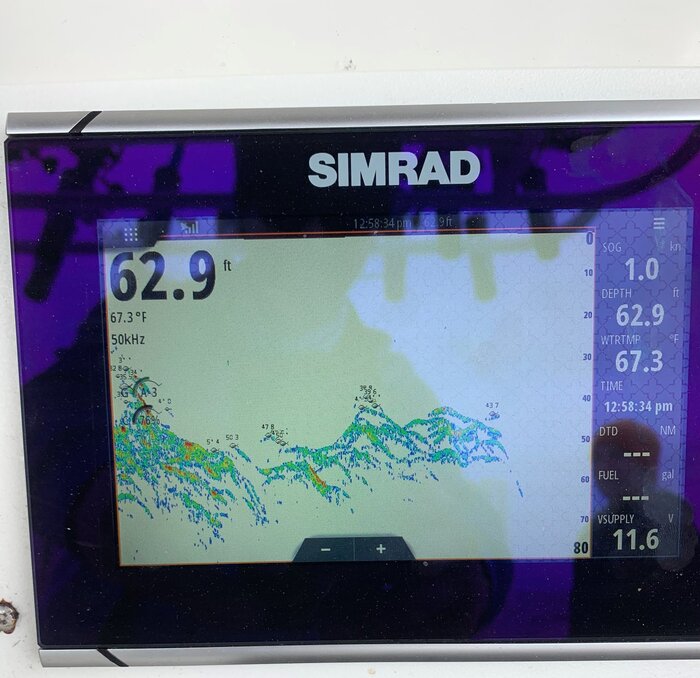 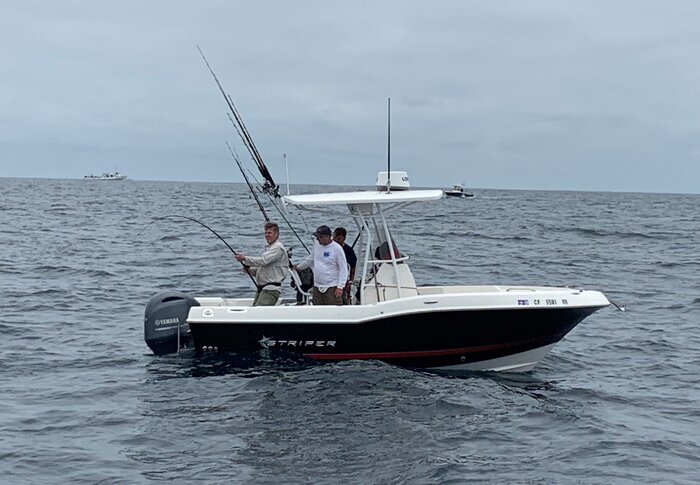 Thanks for the report Mark. BTW, that's me holding the pole on the CC. I didn't hook this one but it was a beast on the 20lb rig. And yes, it was a 10-25lb jig rod with 20 pound braid and 20 fluoro leader on a small 2 spd reel. He was using a 1/2 oz sinker on a rubber band and got picked up after a long soak.

The fish went at least 60lbs but unfortunately when my buddy went for the gaff shot he had grabbed the gaff without the wrist loop and the shot wasn't great. He hit the BFT towards the tail and it took off with the gaff. A shitty way to loose the fish after that battle, but that's what happens sometimes.

Ditto on the rest of Mark's report. We hit multiple paddies that were dry also. There were spots of small YFT with birds working them but nothing of any size. I had one other hookup on 30 lb leader but the hook pulled after about 1 minute.
Reactions: clevel
W

That was two friends and I on the striper, that fish played with us for over an hour and a half. Every time we brought it up it would just pull back down about 10 feet under the boat. Desperately I reached for a gaff in the midsection at missed landing in his tail lost the fish and the gaff! Our crew estimated that bft at 70 pounds I figured he was between 44 and 48 in. The sporties did well yesterday having a lot of sardines pays off when the fish are deep. We'll be back out soon!
Reactions: clevel

Did he not know what he was fishing for? Also a 2 speed reel fishing 20lb? Lol wut? Why?
Reactions: I hate seals and mkfriedrich

Hismosa said:
Did he not know what he was fishing for? Also a 2 speed reel fishing 20lb? Lol wut? Why?
Click to expand...

No kidding. Even in the heart of summer when it's kelp YT and YFT, etc, I don't think I would ever fish as light as #20 main line. That's just suicide. That's Kelp bass gear.
Expand signature
Seaforth Sportfishing 6-pack charter boat "El Gato Dos"
Reactions: One_Leg and Sdchronix

My intention was not to blast the guys that hooked up on 20# and lost the fish. Being a small boat owner we are limited with the amount of bait we can chum and lines we can fish. I’m sure they knew the percentages with landing a large fish on light line.
Expand signature
MADDOG
Reactions: OdessaDog
M

On a private boat there is nothing wrong with 20 lb. Would not do it on a party boat as it screws too many other people. No need for a 2 speed on 20 lb. Completely useless. You cannot pull hard enough to use it. Of course it does allow you to use heavier gear on it.
Reactions: Paddyman1 and Triggerfish
P

makairaa said:
On a private boat there is nothing wrong with 20 lb. Would not do it on a party boat as it screws too many other people. No need for a 2 speed on 20 lb. Completely useless. You cannot pull hard enough to use it. Of course it does allow you to use heavier gear on it.
Click to expand...

I think there was a lot left out about that particular situation. Like the o.p. said the heavier gear wasn't getting bit unfortunately. We tried just about everything we could including flat falls, surface jigs, fly line etc....I was running #30 p-line cx which is the same diameter as #20 mono. No luck. So out came the light gear. lol. The fact that he had a oversized saltist 2-speed lever drag with close to a mile of Spectra, was the ONLY reason he got that fish to the rail. Drag was at 30-40%, the bait stick was admittedly too light for the reel . But others were getting there reels smoked once bit so ... Not the case for us. But who knows they could have had a larger fish on. I was very impressed with the capability of this set-up. BTW, I'm pretty sure he bought it second hand for less then my Shimano torium 20 new. So you never know. Good luck guys, hope to get back out soon!

I've was on those fish a couple weeks ago, I would never put 20 or 30 pound line in the water..... My first hook up was a 75 pound BFT, on 60 pound braid with 60 pound floro leader, I fought the fish for 1.5 hours before we got a gaff in him... One of the toughest fights I've ever had... at the end I had the drag button down to get him to the boat.. To put it in perspective, 3 years ago I got a 220 BFT on a kite rig on my boat, and it didn't fight that hard (the kite fish was a troll fish though), the 75 pounder was a bait fish..
Show hidden low quality content
You must log in or register to reply here.
Share:
Facebook Twitter Reddit Pinterest Tumblr WhatsApp Email Link