Left PL late 10am expecting the afternoon bite judging by moon phase. P/u dines a the local bait barge good quality of mixed. Then headed towards the 302 and southwest via the 9. The 9 no signs at all, the 302 same but showed fish marked at 30-50Ft. Tried Fly line but no love. Threw bait at them and still no love. I showed them hovering over a bio mass of bait. Water 68-9.
Looked for signs everywhere for nada. Found one paddy 10 south of the 302 for nada.

Called it a day by 4 pm and decided to check my old honey hole west of the Coronado's in what I call the canyon. Saw one Cattle boat on the west side of the big Island, So I headed towards it looking for signs on a slow troll. With in five miles west of the south Island saw small birds chasings bait. Made a dash towards the birds to find two or three areas of birds chasing bait. The cattle boat saw me chasing birds and made a hot pursuit towards me.

Small birds small bait small prey thinking Bonito. Trolled through a couple of birds and went for the next group of diving birds followed the birds south of the Islands and the cattle boat gave up pursuit. Saw a much larger group of bird over a small boil. Headed towards it...
Then bam the cracking of my clicker on my Penn 40 LW with #40 braid and #40 fluorocarbon and lite feather jig goes off. One boner in the cooler.

I then see a small boil and dump some bait to bring them to the boat. 1 seconds a boil erupts closer to the boat. Their around the boat! Dropped a fly line on my Penn 500 Star drag with #30 braid and fluorocarbon and small #2 hook. Bam instant hook up, Lost it at deep color. Very dark colored fish. Guessing BFT by the fight.

Decided hook was too small so started the troll near the diving birds and Bam my Penn 500 with #30 braid and fluorocarbon and same lite feather goes off. I keep the boat in gear pull up the other troll line while fighting the with the Penn 500.

I get close to deep color and dive just like the other that spit the hook. This time I got it to color and the big reveal. BFT!!!
I was able to set my gaff in the gill and pull it onto the boat. Called it a day left them biting and headed back to the barn. That is exactly what I had planned for. Could not ask for more.

Check the pics. I guessing both just under #20. Water bottle next to cooler helps one get an idea how big they are. What's your guess? 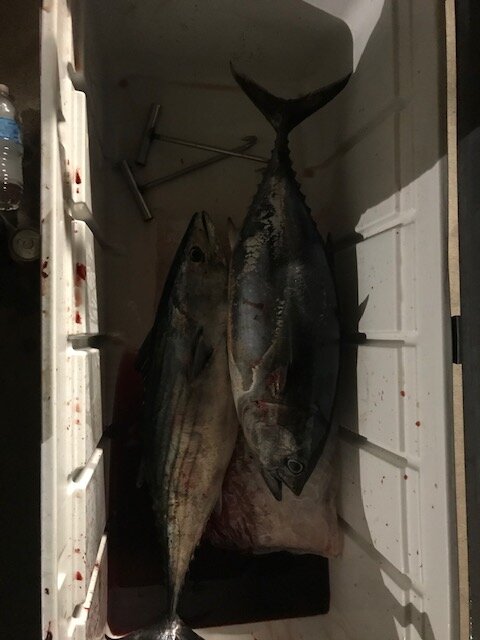 Nice but if those are just under 20 lbs. that a big cooler.
Reactions: 16glaspar
Upvote 0
F

Great job! thanks for sharing brother!
Toggle signature
Some times killing fish is like masturbations, you just don't talk about it. -AlbacoreShuffle

Always happens when you skip the ice...Good job. first one chew thru or spit the hook? 2nd one on the feather, what color?
Toggle signature
Lurkmeister
Reactions: 16glaspar
Upvote 0

Fins in the Bin said:
Always happens when you skip the ice...Good job. first one chew thru or spit the hook? 2nd one on the feather, what color?
Click to expand...

Yellow and silver speckled. Very similar to a Bucktail B-52's. 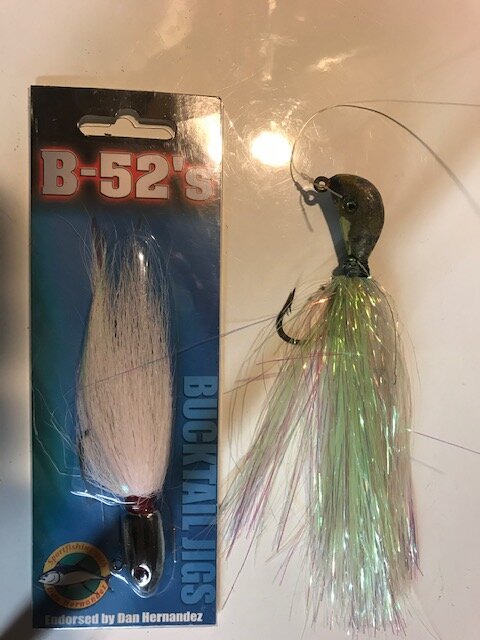 WAY to Stick it out. Got a double header there. Solid Work.

Dan would be proud..
Reactions: revolution cng, Zika, pacificscout and 5 others
Upvote 0
M

Good job, what time were you there because my cousin and I ran into a quite large school of bf about a mile and a half of the backside of the islands yesterday on the way back from 371. They were so thick you could have walked across they. Just crashing every where but couldn't get them to go but also didn't have any bait either. We did try every thing under the but no love. I'm guessing they were 10- 15lbs from the hundreds I seen anyways.
Reactions: 16glaspar and Jeff Hannah
Upvote 0
J

Fun is fun, and look like you had some! Fun!

Let'a have a better day today, than we had the other time.
Reactions: 16glaspar
Upvote 0
Show hidden low quality content
You must log in or register to reply here.