This is my first report!

I'm part of carefree boat club out of san diego bay so I usually take out a 24 foot center console. After watching the fish move up over the last week or two we went out to the 371/425 today. I went with a buddy who is *much* more experienced. Anyway we left at 6 and the bait barge only had like 98% smelt. Rather than run up to mission bay or try to make macs we decided to take the smelt and the maybe 10 or so dines we got with them.

Headed out almost straight to the 371. Water was around 62.5 or so. Metered a few fish but couldn't get anything to bite our $4 sardines.

We then trolled over to the 425 and the tuna pens. Water was ~61.5-62. I think one tuna pen in particular might have been hosting a concert on the bay because that's sure how it looked with about 50 boats around it. I'm sure some of you reading this were there.

We noticed the guys who were in front of us at the bait barge (who also happened to be on the smallest boat out there like a 17 foot skiff). They got bit and it was hilarious because you could look around and see people on about 15 other boats all standing watching this guy fight it which he did masterfully for about 15 or so minutes. There were sea lions around but they were able to land what looked to be a 80 or so lb fish.

Anyway to set the scene, in the general vicinity of this one tuna pen, there must have been at least 100-200 sardines with hooks in them floating around and we would very occasionally meter a fish anywhere from 200-500 feet.

And then it happened. My newest setup that I had bought the week prior just took off. It was 80lb braid / 80lb mono on an avet HXW Raptor. It pulled insanely hard. I had some time pulling on a #170 on a worse setup on a previous trip and this felt more aggressive. Anyway we (and I would say 70% my buddy) got him up closer to the boat but we didn't see any color. There were 2 sea lions around the boat as well. Anyway at this point he just takes off with absolute insane force. My buddy thinks it was the sea lion chasing him. He took all the line we had gotten back and more. At this point he told me to get the boat going and follow the fish so I couldn't see what the reel was doing. We did this for a bit and then he yelled at me to stop and help because the line had started to slack and he couldn't reel anymore. So I was able to reel it up tight and start pulling him up in high gear, but I switched into low gear and it didn't seem to be functioning right to me because I wasn't able to get line like I was in high gear with similar force. It was also noticeably very hot. I was about to try switching it back to high gear but my buddy sensed the issue and took over. After this the fish didn't fight much anymore and we were able to pull it up and gaff it. Once we got it on board it seemed to be right around that #170 size as well.

Such an amazing experience.

Anyway, after cleaning and icing we drove around tried to meter some more for our last few dines but didn't get a second bite so we decided to head towards the 302 because the water was warmer in that direction. Saw water up to 63.2 but no sign of life at all. Started to get colder so we called it a day and didn't quite get to the 302. 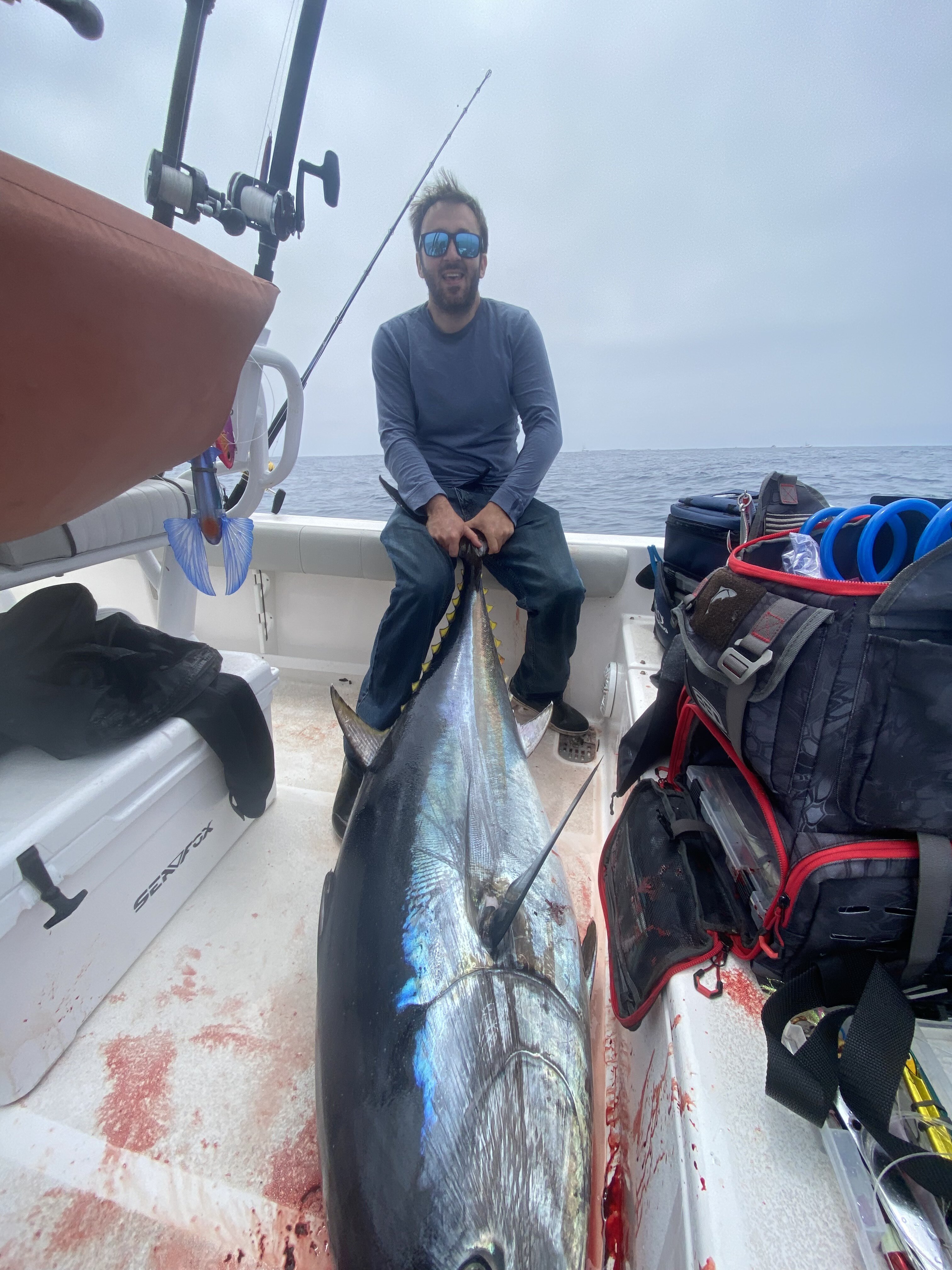 Always nice getting the pretty girl in a crowded club full of other lads. Congrats
Reactions: Fishboss, Reel hip, Tuna Dreamer and 3 others
Upvote 0
H

Boat Name
Got one

Outstanding! Thanks for the post.
Reactions: Tuna Dreamer
Upvote 0

Unforgettable I'm sure.
You guys did a wonderful job with that nice fish.

Usually I’ll take my flylined smelt and try to cast that sum bitch right into the tuna pen if I can. Almost a guarantee.
Reactions: Drew Stephens, cws1017, Si Como No and 1 other person
Upvote 0

Great report thanks. I hope to get soon !
Upvote 0

badass! great write up and sounds like an epic experience!
Upvote 0

congrats! noticed the Slipstream in your pic. have you trolled it with any success?
Upvote 0

Yeah, Carefree needs to upgrade their bait tanks. Good job on the bft!
Toggle signature
You're an 8
Upvote 0

Cool report/read/pic and NICE TUNA for your patience and effort. Solid Work.

Great first report!
Toggle signature
"A bad day of fishing is better than a good day at work."
Upvote 0
Z

It's kinda hard on the 248's cause it's built in. The sea fox built in bait tanks aren't ideal but we can usually put in 1/2 scoop and still have a few alive by the ride home as long as we are removing dead ones as they day goes. One of the bait tanks was borderline inop for awhile as the pump was failing but it was replaced.

The new boat they got the blue moon has a better bait tank but it has dual outboards so it burns quite a bit more fuel.
Upvote 0

Did you get it on a smelt or a sardine?
Upvote 0

Congratulations! I got spooled Monday on a HX 80/130Flouro freight trained. Force like I have never felt. The reel was super hot! couldn't even touch the sides of the spool or sides of the reel.
Toggle signature
Disclaimer: The opinions expressed in this post are are mostly bullshit and should not be taken seriously. It will most likely contain spelling and grammatical errors. Lat./long. #'s or fishing locations should not be used for navigationtional purposes. The above information is not intended to diagnose, treat, cure, or aid in preventing disease. All of my photgraphed fish are actually larger than they appear.
Reactions: Danthefishman
Upvote 0

WTG? Thanks for the report.
Toggle signature
...
Upvote 0
Z

aquasport79 said:
Did you get it on a smelt or a sardine?
Click to expand...

Sardine, didn't think of trying to use the smelt. Here was the hook it was a 2/0, I forget the brand the the beefiest ones I saw in the store that day. Didn't seem to bend at all.

I actually just started doing crimps before this trip because we were having issues having only 2-3 heavy setups and having to keep re-tying and switching between different types of fishing. So I crimped on 100lb leaders onto our madmacs and knife jigs and made a few of these live bait hook 100lb fluro leaders to attach to our snap swivel which was crimped onto the 80lb mono.

I know it's not ideal to have the crimp that close to the hook. I think it cinched on it a bit too, but tag ends were melted so it held. 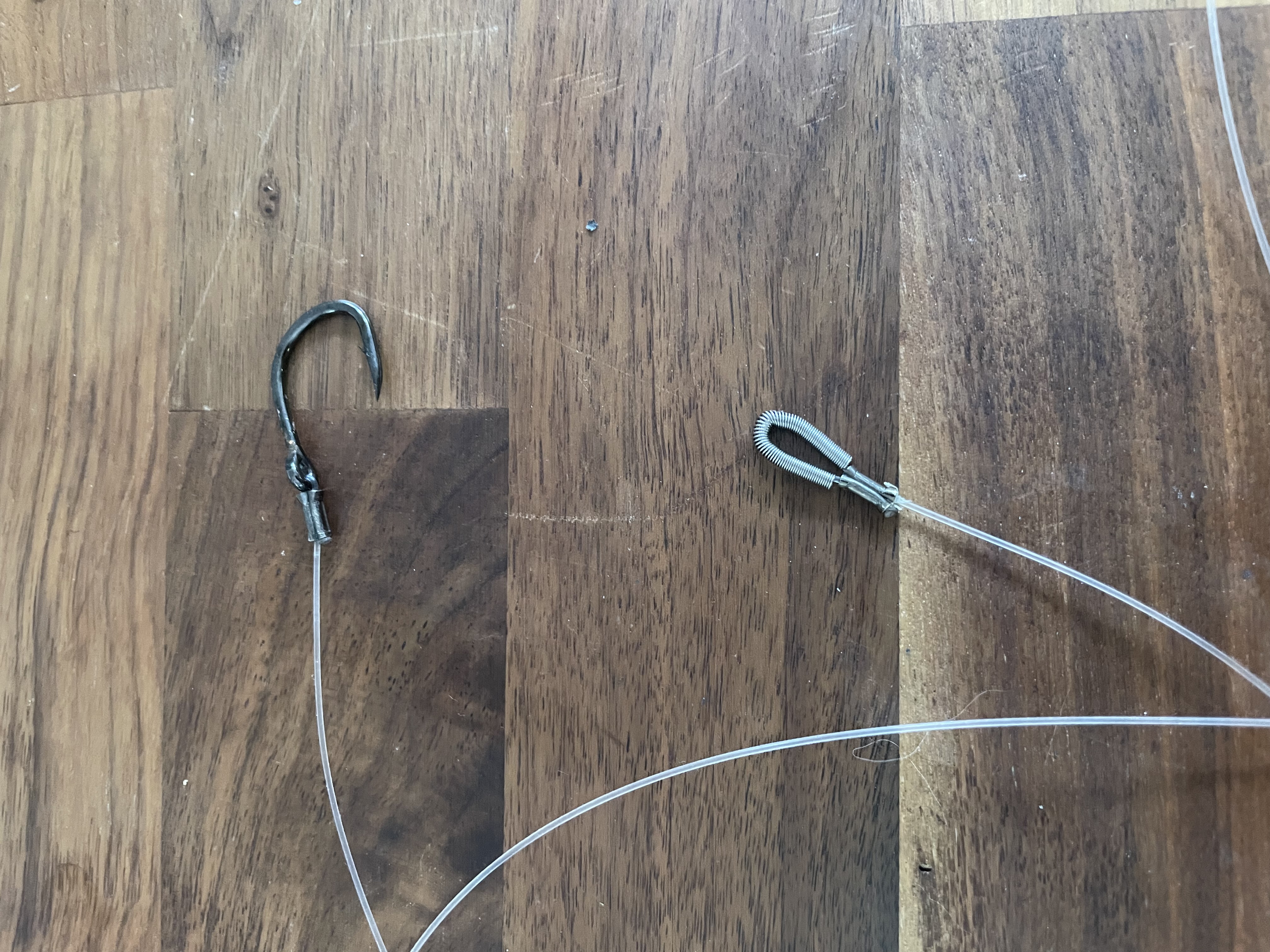 Awesome report. Did you figures out what’s the issue with the HXW Raptor?
Upvote 0

Wayyy to go!
5 years ago this post would have made the front page of BD.
Now it's fishing as usual. What a great fishery were in . Good job on a really nice fish.
Toggle signature
If you stay on a boat long enough you are bound to catch a fish!
Upvote 0
Show hidden low quality content