I've been fishing quite a bit recently and had a positive response on my last report so I have another one to check in with.

I joined the Freedom boys last Thursday night 5/13 in hopes of taking a shot at some island yellows. Our group of 30 anglers had similar expectations, but we were in for a big surprise! Upon boarding, Capt. Tino informed us that there had been good signal of BFT in the offshore zone surrounding San Clemente Island. He told us that we'd take our shot offshore and swing into the island if we didn't have enough action to keep us busy towards late morning. We were instructed to prepare a 25-30lb. flyline rod and a 40-60lb. rig with a small flatfall or colt sniper. 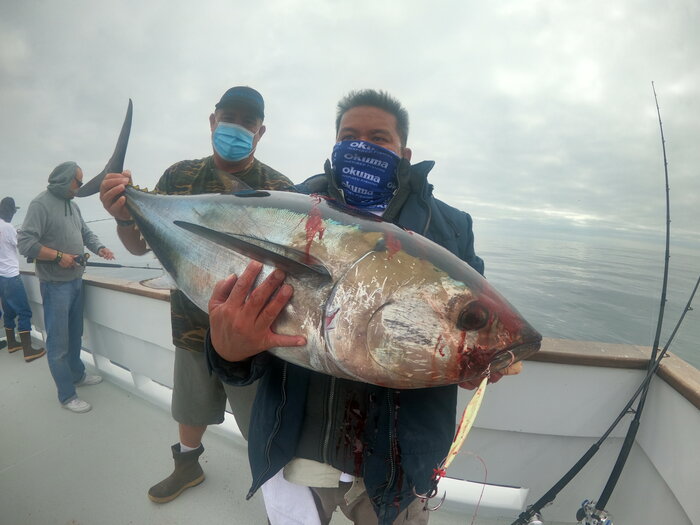 Capt. Tino and Charlie Lam display the first Freedom BFT of the year caught on a 180g flatfall with upgraded hardware

Our day started early, right at the break of grey light Capt. Tino announced over the speaker that there were tuna under the boat and to get to fishin. Charlie Lam broke the ice and hooked a nice grade tuna on a jig. About 20 minutes later a plump 50-lb model made it over the rail. Passengers fished while Lam battled his bluefin, and in every direction around the boat there were single jumpers of bluefin, flashers, breezers and even some foam! We saw different classes of fish anywhere from 20-150lbs. Some of the bigger models were in line formation lazily swimming on the surface with dorsal fins and tails completely out of the water. The fish acting up on the surface stayed comfortably 300-400yds away from the boat. 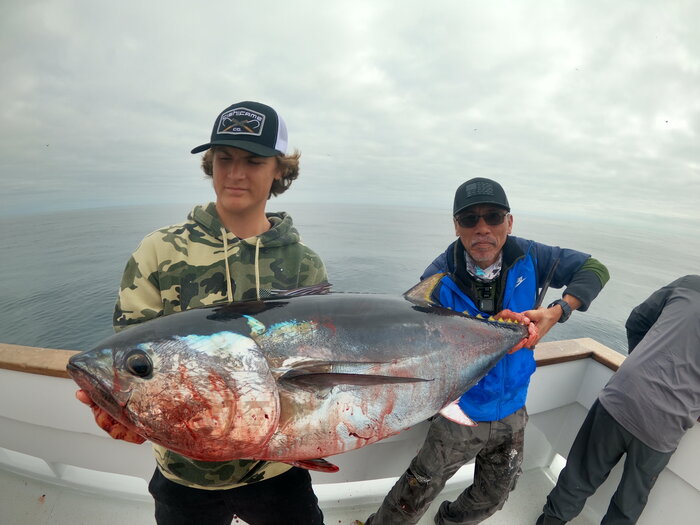 Shortly after Lam's fish, angler Francis Villamor hooked a quality tuna of his own on a 100g Colt Sniper. The 55-lb. bluefin was, however, hooked on oversized bass gear. Villamor was at a stalemate with his bluefin for about a half hour, before his reel mount completely exploded. I was on the bow at the time fishing a colt sniper but on standby to snap photos. In a pinch, I offered my rig and Tino & deckhand Trevor spliced the fish over to my rod and killed it in less than 2 minutes.

We continued to pick away on the small jigs. We got to take our shot at the fish of our choice as literally thousands of bluefin were active on the surface putting on a show in every direction. Pretty much every stop between 1-3 fish were hooked, almost all on the small jigs. Every so often some wolfpacks would blow up on our chum but the fish were mostly doing their own thing. My friend Bill Wall put the hurting to them on a small flatfall. 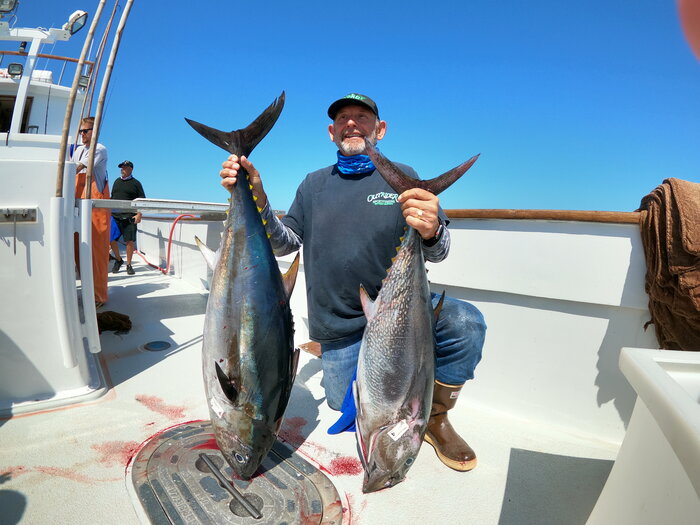 Bill Wall shows off his limit of BFT caught on a small flatfall.

As the morning progressed, the attitude of the tuna changed. They were around but no longer acting as aggressive. Tino made the call to join his codeboats fishing SCI to put some yellowtail on the boat in the afternoon. We made a 2 hour move and found ourselves on the yellowtail grounds; this had us in the fishing zone around 1:30pm and we would be pointed home at about 2:30. It didn't take long for the yellowtail to find us after anchoring and beginning a chumline. 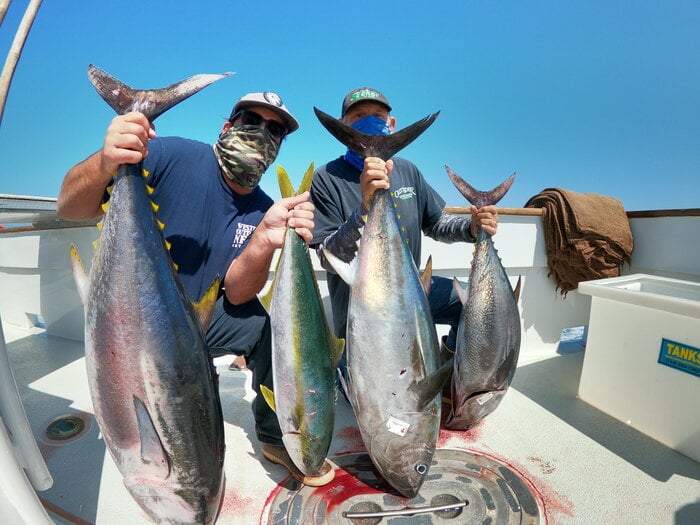 Justin Spiegel and Bill Wall show off their bounty.

With bonito and yellowtail in the chumline, our anglers picked away. We didn't have much time in the YT zone, however when we showed up they were in a biting mood. We captured yellowtail on different methods including flyline, dropper loop sardine, and surface iron. Our flyliners in the stern did the majority of the damage. There were 5-7lb. class fish along with 15-25lb. class fish. We managed 14 yellows and a smattering of smaller bonito for 30 anglers in this hour of fishing. 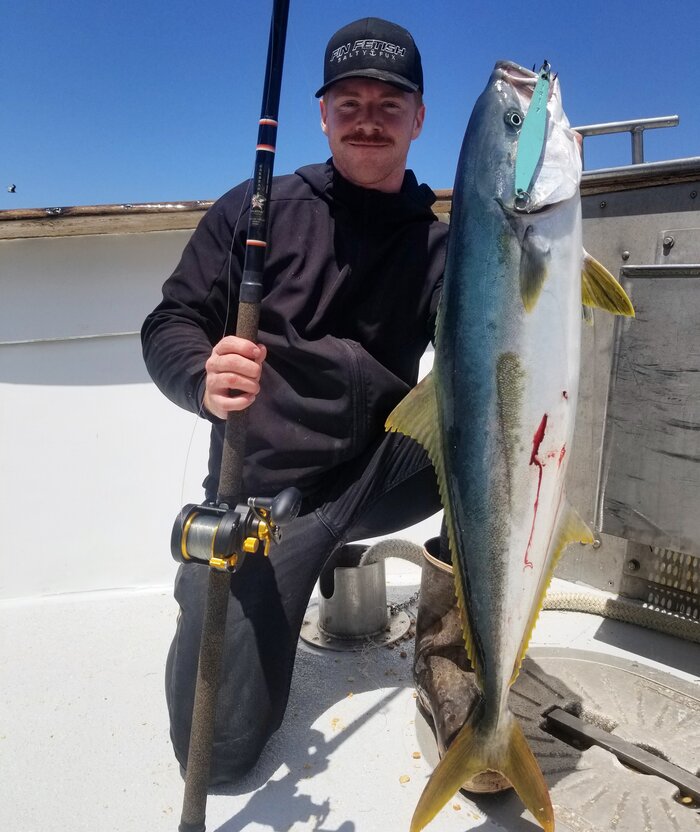 I struck out on the bluefin grounds without even earning a bite! You win some and lose some. At the island proper my luck was better and I managed a nice size yellow on the jig. It was super gratifying to get a visual strike; I watched the fish come from behind, grab the jig and do a full 180 with my jig in its face. Wind and grind. Final count: 30 anglers 8 BFT , 14 YT and 5 bones. We went about 8 for 20 on the tunafish.

Thanks for reading!
Last edited: May 17, 2021
Reactions: JamesZ, mrtonx, Fishing for Memories and 35 others
Upvote 0

YT on the iron. Nice! You'll get your BFT next time.

Great report and looks like a fun trip. Thank you for the details on what's working.
Upvote 0

What brand of reel broke? Btw a nice write up!
Upvote 0

Great report Thank you, Great boat, that my local home boat and last year I had a couple PB yellows and BFT hoping to repeat this year..... Mater of fact I'm booked for 5/29 Saturday fish Sunday hoping the yellows or BFT or both are eating for the trip...
Toggle signature
Work to live and Live to fish!

onehottip said:
What brand of reel broke? Btw a nice write up!
Click to expand...

It was a Komodo. I believe it was an aftermarket clamp that busted though.
Upvote 0

Great report thanks! Can't wait to go this weekend!

How are you guys fishing the colt sniper for BFT? Cast far, count to 5 and reel or are you dropping it like a flat fall? Other techniques? Thanks,
Toggle signature
Come Join Nasty Bill's
Lingstravanganza​
Reactions: racecarchamp
Upvote 0

How are you guys fishing the colt sniper for BFT? Cast far, count to 5 and reel or are you dropping it like a flat fall? Other techniques?
Click to expand...

Sink the jigs down a little past where you think the fish are and retrieve. But what do I know I couldn't get bit! The bites I observed were 50/50 on the drop or on medium-fast retrieve. Almost all bites relatively shallow , 10-20 fathoms. Fishing directly below boat or casted from bow towards area of chum eaters..
Reactions: Ventura Bill
Upvote 0
Show hidden low quality content
You must log in or register to reply here.

Islands Jig Eaters on the Freedom 7/10