my friend MR bob Baker,El bobÂ¨,Ã¤nd his friend SteveÂ¨DaÂ´rangerÂ¨,were here in sq for a few days of R&R and some fishing,on wenday it lookÂ´d kinda bad,but we went to the beach and,wile there was some wind the water lookÂ´d great,it look snotty this morning,so we headed to san martin island to fish the lee side and keep out of the weather for a bit,we started balldraggind around the light house and eb bob,drew fist blood with a nice 16 pounder and again with a yellowtail that hit the hootchey,then steve daÂ´ranger turn,he put a nice fish on the boat,then onother,after that tinghs slow down for a bit,around mid day the sun pop out and the day turnd reel nice,el bob put onother 14 or pounder on the boat and right after that daÂ´ranger got slamÂ´d hard and after a bit of a tosul her landed and awsome fish that weigh in at 48.74,the smaller big fish was 25.50,the other 4 fish wÂ´re in the 12 to 17 pound range,the water tem was 56.7 at 7 AM and afetr the sun came out things settle down reel nice,thanks bob and steve for a few unforgetable days on the baja.
this halibut bite is just getting going and the tails should start showing around the island,if youre interested if fishing for some iÂ´ve some openings in early june and late may,you may want to try youre luck at some of this lunker fish,goodluckgoodfishing.

Dam, thats a nice fish, hell all of them are nice.
Expand signature
Chris

Nice Butts. What is the water temp?

DAMM!!!! Juan don't forget about the White fish at the 15. Chato

You gunna show us your secret hoochie rigging technique?

way to get er done Capt. I'm looking foreword to getting down in July....see ya then. Bob

Boat
any chance I get

Boat
Need a Captain or Boat in San Quintin, let me know.

Bob and Steve thanks for stopping by and saying hi. Nice Job on the halibut!

Damn Juan......Nice fish, Great Captain!!!!! How the hell did you find them??? No one else has been able to find halibut in the past couple days. I've been asking around. Somehow the fish are attracted to you. What makes you so special????

I just spoke with Juan and he is fishing at the moment and he has more halibut on the boat. How he finds them, who knows....but he does.
Expand signature
It's just another day in paradise.....
B

Nice job on the halibut Capt. Juan that pig halibut looks like it came from Alaska its a pig.

What a great trip with Juan. Yellow Tai8l and WSB are next on the menu. You never miss with Juan.

muchas muchachas para todos,water temp today at 9:30 AM was 58,and getting better,I saw a smal scholl of brezzers today,but only for a couple of minutes, then they w're gone,but it sure starting to look reel nice,as soon as this wind settles down a bit you can expect some great fishing comming our way.tomorrow i'm going to the 15,to get chato some whitefish,there the best thing for ceviche,yummmm.
Expand signature
Captain Juan San Quintin! For fishing info call 011-521-616-109-6877 or e-mail me at [email protected] from Ensenada, TJ, or Rosarito 045-616-109-6877
https://www.facebook.com/CaptainJuanCook/

Damn! Those are some great pictures! Making me jealous over here and hungry. I gotta get down there very soon. Way to kill em'!
Expand signature 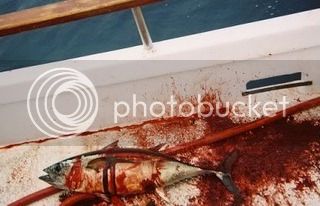