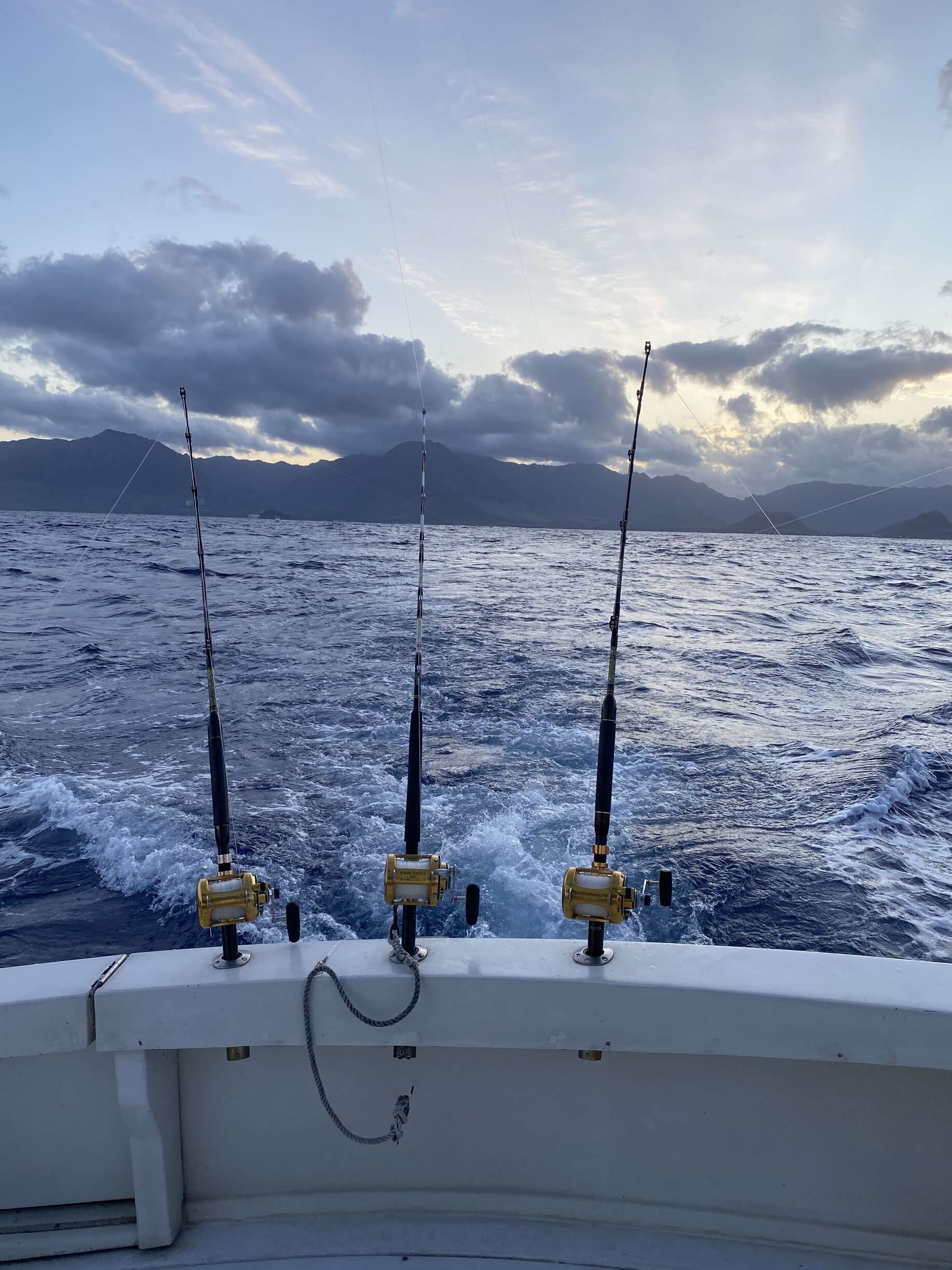 Darren and I pushed off around 5, early enough to get some bait, and we did. Being in no hurry, wanting to cross the 300 with the spread out we hung out for a few extra minutes before throttling up. On our way, cross the 300, 500 but didn't quite make it to the 1000 when the port rigger went, chee. At first wasn't sure if it was the right one or not, as a matter of fact it was 3/4 of the fight wasn't quite sure. Darren had Eric's brand new Black Magic stand up rig on, reeling in our early morning buddy. Earlier in the day the winds were straight out of the valley so needed to bump Kai'Nana to keep her stern to the seas.

Darren does a great job of getting the fish to the boat, I am at the wheel when he says deep color, at that point I took the boat out of gear and let Kai'Nana set port side too. Once she was close, got Darren out of the gear and the rod in the rigger rod holder, last couple cranks of the handle and i had leader, Darren stuck her with the gaff, I had the hand gaff in my waste band stuck that in her mouth and we yanked her over the side. I think it was about 6:55 and the pressure is off. 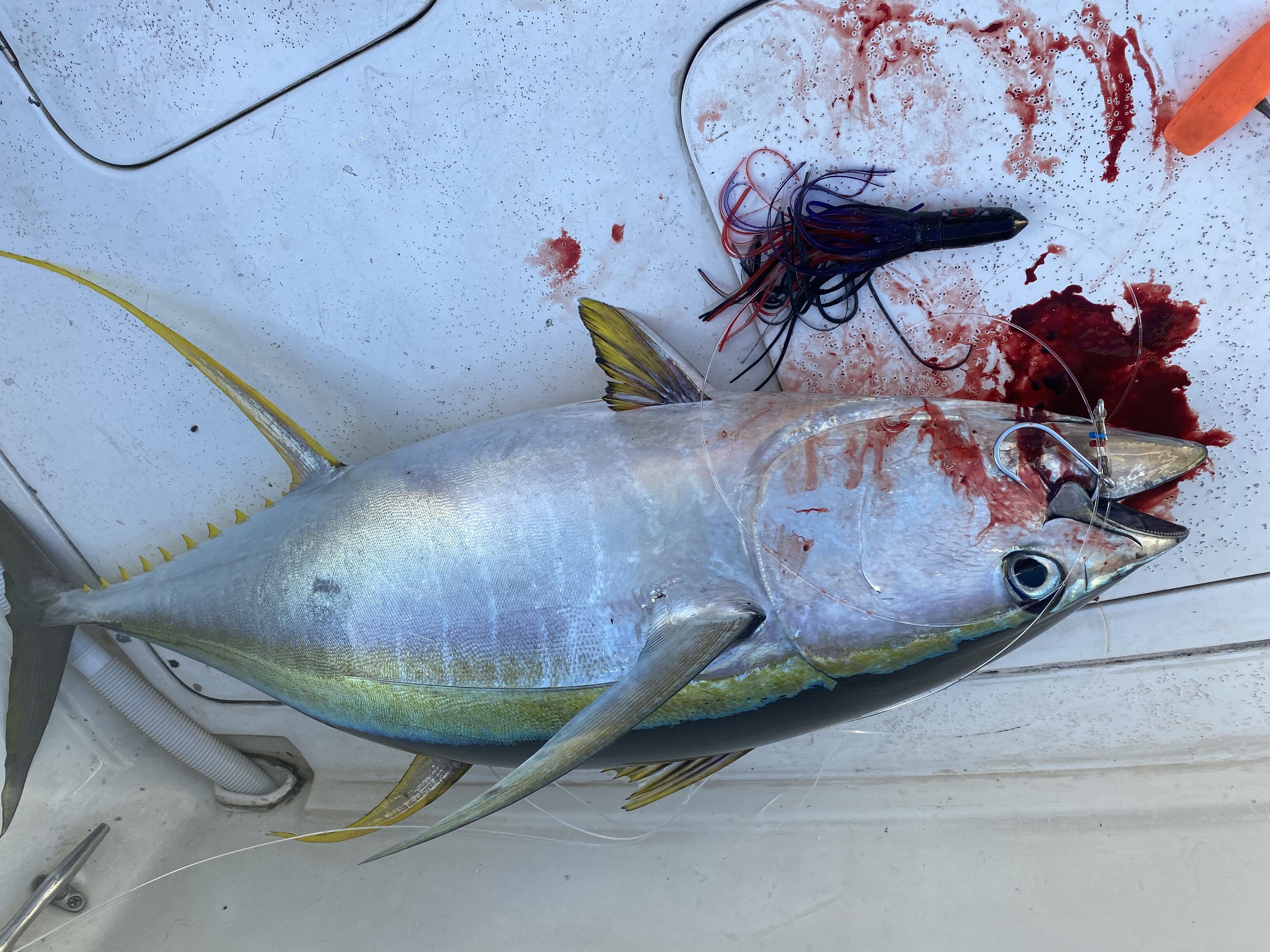 We got set back up, I cut the fish then ask Darren to come down just to help get the fish in the box, done deal. We stayed at for the morning, looking here and there. Two of my slip neighbors were out as well they had gone a little bit to the right, they had alot more bird action with some akus but no big strikes. Not seeing much that says stay with it, we started to head for the barn...

Again not wanting to reel anything in until we're in pretty close, as you may recall the previous 2 trip we had a fair amount of action inside of the 500 curve. We cross the 300 and start clearing lines, got the flats and corner cleared when the port rigger goes (you gotta be kidding me) and comes off, then the stbd rigger goes and comes off, assuming Onos, ask Darren to slow down and I reel in the center, left it in the water maybe 15-20 behind the boat still up in the clip. Then reel in the port rigger, about 20' from the boat this marlin comes from the outside in and grabs the lure and misses the hooks, 10 seconds later he ripps down the center and misses the hooks. This is almost getting bizarre, mind you were are now very close to the harbor. OK so the stbd is still out, so go and reel that in, almost exactly the same distance from the boat the fish grabs the lure, looks like he might be hooked this time wrong. Now we are close to the ono ledge. All in all a successful and fun day. 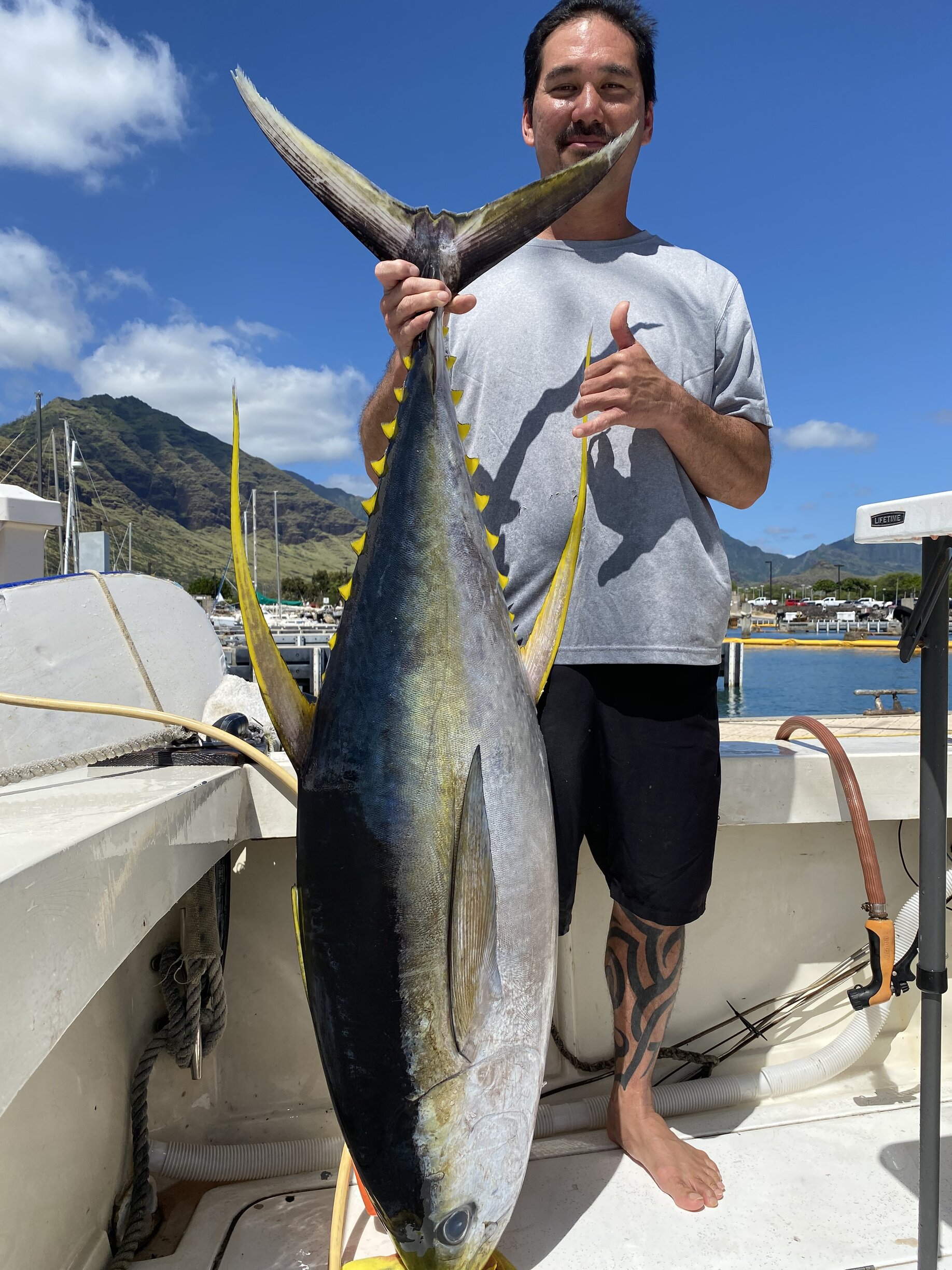 You also may recall I had lost that black 9" KC lure last Wednesday, well I was fortunately able to find all the pieces-parts to replicate that lure and that's what did the deed. Thanks Ken for making KC Lures. Thanks Darren for doing all of the work. 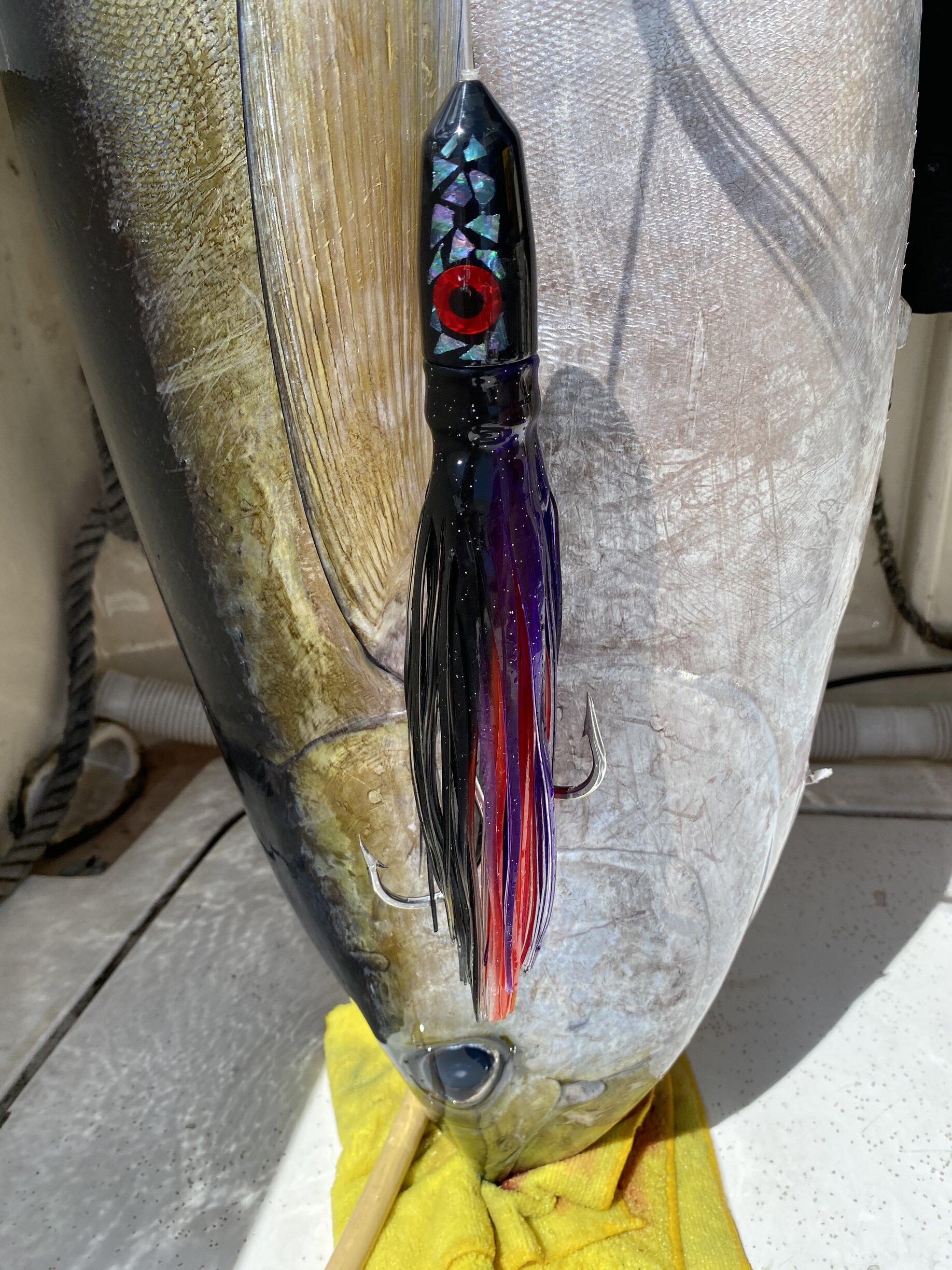 Pat and Darren,
congrats on yet another nice Ahi! Wish I had that kind of karma on my boat!

Congrats fellas! Great to see the yellow guys this early in the year! Hopefully thats the first of many for 2020!

Thanks Truman, we may have got that one, but have certainly missed more than our fair share the last week or so.

russell kato said:
Pat and Darren,
congrats on yet another nice Ahi! Wish I had that kind of karma on my boat!
Click to expand...

MattH808 said:
Congrats fellas! Great to see the yellow guys this early in the year! Hopefully thats the first of many for 2020!
Click to expand...

Thanks Matt, you're correct here early in better numbers. Last couple years there were some as early as March but they were few and far between.

Pat, thanks for another great day on the water. Somehow we tend to get bit when you are on the deck doing your thing. Fishy fishy. My family and friends appreciate your generosity with the catch.
Reactions: jkvshooter

shadzdad said:
Pat, thanks for another great day on the water. Somehow we tend to get bit when you are on the deck doing your thing. Fishy fishy. My family and friends appreciate your generosity with the catch.
Click to expand...

Thanks Darren, I wish I knew what that thing was so I could make it happen more often.

I love it when a fresh lure gets the bite!
Cheeeee
Expand signature
If God didn't want us to EAT animals then He wouldn't have made them out of MEAT.

Thanks Dude, I'm thinking you guys are getting closer to "FREEDOM"!!!

jkvshooter said:
I love it when a fresh lure gets the bite!
Cheeeee
Click to expand...

Thanks Justin, especially after loosing that exact "fresh" lure the previous trip and able to cobble one together and it goes the next trip.