Congratulations. She is now a member of a very elite Super Cow Club. 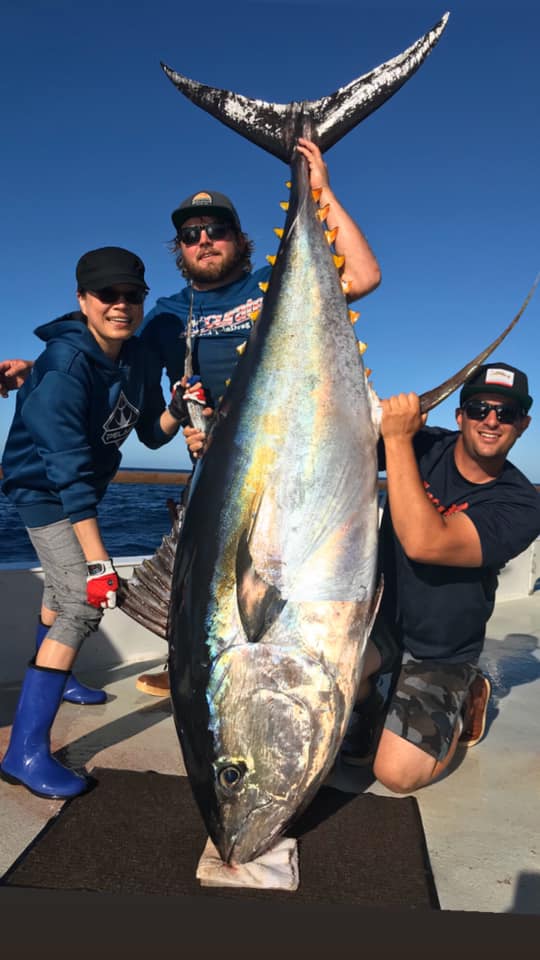 The 445-pound yellowfin weighed yesterday by the Excel at Fisherman's Landing was acceptable for the jackpot by boat rules. That makes it acceptable to me for the top tuna list, now modified to reflect John Petruescu's incredible catch (by a rookie, no less) of the biggest yellowfin tuna ever caught. Here it is. Bill Roecker's Top Ten Tuna:


It appears the lower banks are producing several cows and super cow. I saw the Intrepid report on a few. The Rooster appears to have another super cow and several cows as well. I know the Indy was there as well but haven't seen any recent reports.

Congratulation to all that have joined the 200 pound and 300 pound club.
Reactions: Peg North, tugasangler, esgeo and 14 others
Upvote 0

heading out on the shogun 14day jan2. sure hope the body of fish present on the lower banks now holds until then...
Reactions: tugasangler, ZZZZZ, stephen campbell and 2 others
Upvote 0

Still trying to figure it all out

shellback said:
heading out on the shogun 14day jan2. sure hope the body of fish present on the lower banks now holds until then...
Click to expand...

Heading out on the AA, January of 2021. Sure hope they hold until then.

Beautiful fish, would like to know the story behind it.
Last edited: Dec 11, 2019
Toggle signature
Fear No Fish! But Respect Them All!
Reactions: tugasangler, GES, pascuale and 1 other person
Upvote 0

"ONE FISH AT A TIME"

Congrats!
Toggle signature
Many men go fishing their entire lives without knowing it is not fish they are after.
-- Henry David Thoreau​
Upvote 0
I

Badass fisher Women are so hot!

I think I’m in LOVE!

Congratulations to her.
Toggle signature
I CATCH IT. I KILL IT. I CLEAN IT. I DON'T DELIVER IT!
Upvote 0

Boat
The one with blood on the deck

shellback said:
heading out on the shogun 14day jan2. sure hope the body of fish present on the lower banks now holds until then...
Click to expand...

I'll be one day behind ya guys on the Star.

Fortunate enough to be in the right place, right trip to see a 362 come through the gate on the Rooster. What a sight! June Heat, 2009.
Toggle signature
Longer Rods, Longer Boats, Longer Trips, Lighter Loads
Reactions: Bill W and RichG
Upvote 0

Looking at the size of that woman that Tuna weighs 3x what she does-obviously applied physics and mental tenacity won the day.
Reactions: Peg North and RichG
Upvote 0

The tail is not clipped. Even more impressive if it's not a kite fish...….
Upvote 0

DC61 said:
The tail is not clipped. Even more impressive if it's not a kite fish...….
Click to expand...

No reason to clip the tail on a kite fish on the Rooster. It counts in the Jackpot.
Toggle signature
Longer Rods, Longer Boats, Longer Trips, Lighter Loads
Upvote 0

That's interesting. It often doesn't count unless the kite goes through one full rotation, thus the reason for clipping the tail. Either way, it's an impressive fish. Congratulations to the angler.
Reactions: Sdchronix
Upvote 0

Mike reported yesterday that they had 16 over 2 with 4 of those supers!
Reactions: Bill W, cow man, Cubeye and 1 other person
Upvote 0

Probably 2 or 3 of them.
Reactions: James Taylor, Let em eat 74, Fishdood and 1 other person
Upvote 0

Boat
A big Steel One

SouthBayKiller said:
Probably 2 or 3 of them.
Click to expand...

One of my favorite LR stories ever. Curt was fishing a 50TW with 80# mono. He was lighting a cigarette up in the bow when the super ate the Cabillito.

Curt never knew he got bit.

The fish surfaced in the stern where Poole gaffed it first then all hell broke loose. Forgot how many gaffs they put in it.

Curt telling the story with a couple of Crown Royals in him is too funny.
Last edited: Dec 14, 2019
Toggle signature
Your a funny guy! Funny how? You know your funny..the way you tell a story! Oh so I amuse you?
Reactions: James Taylor, Let em eat 74, SouthBayKiller and 3 others
Upvote 0

That Kamikaze Yellowfin comes to the boat without spending any energy. Pick the word to describe it, Green or Hot, but when the guys stick it, “All Hell broke loose” pretty well describes it.

We had a trip that saw two or three of them. Early morning, not fully staffed on deck yet, quite the experience.
Toggle signature
Longer Rods, Longer Boats, Longer Trips, Lighter Loads
Reactions: RichG
Upvote 0

1143 Miles From The Landing

I fished with Curt on my 8 day and he's not bad for a "short fat guy" as he calls himself. He's the one who inspired my 16 day on the Excel....50 days and counting by the way. I even had a hoodie made to mark the occasion... 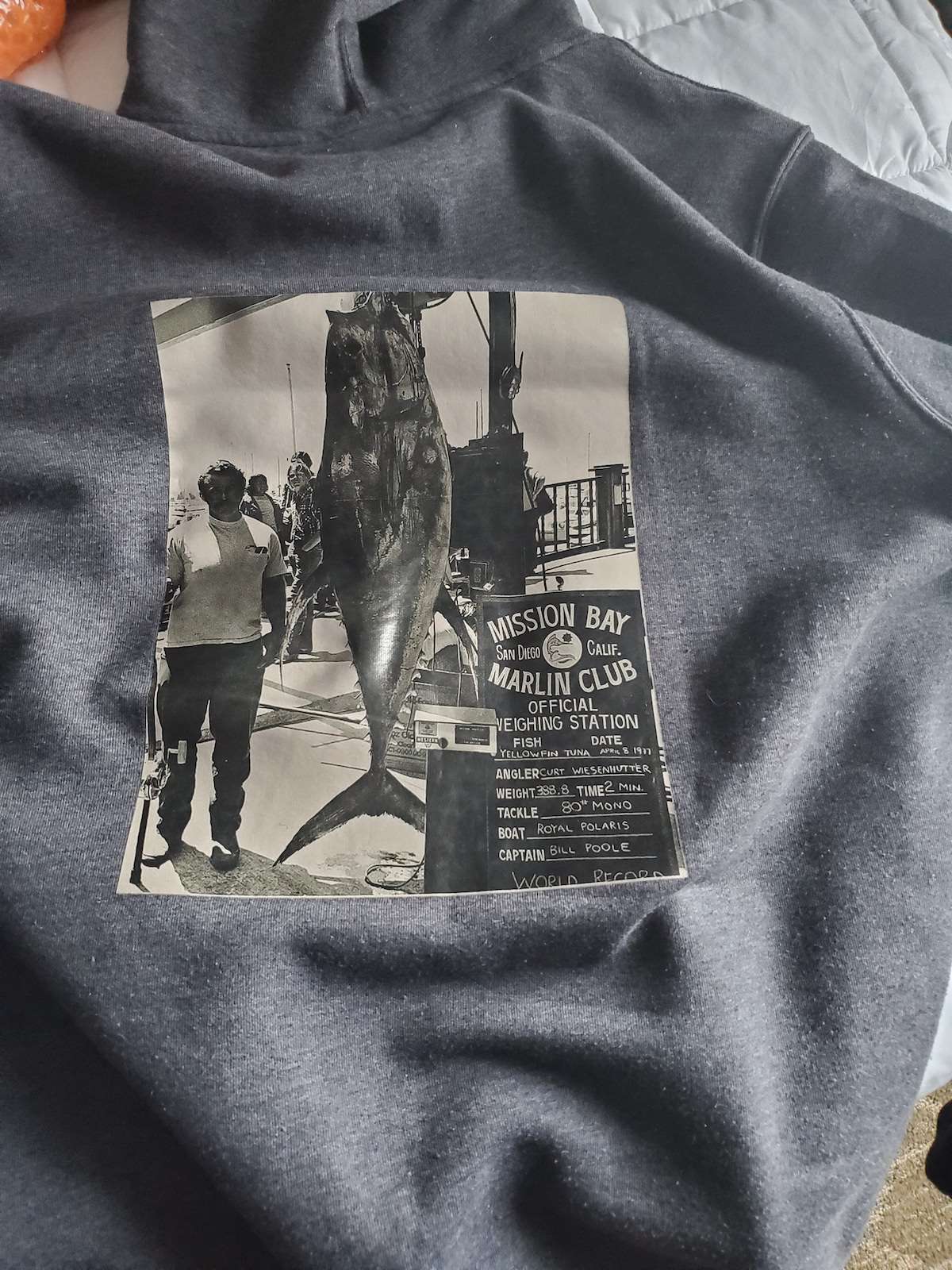 Toggle signature
" All that is necessary for the triumph of evil is that enough good men do nothing "
Reactions: Russ Scholl
Upvote 0

I got more ass than she has teeth.

He has been known to fish and get bit with his back facing the water.

He maybe the ultimate honey badger when it comes to LR fishing.
Toggle signature

afraser said:
Kite? Big bait? Sardine? What was used? We all want to know....
Click to expand...

Victoria caught her big one on a flylined mackerel.

Also, the kite fishing mostly sucked. The majority of our fish were caught on flylined sardine.
Toggle signature
the early bird get's the worm, the second mouse get's the cheese
Reactions: FishRock, picasso, Peg North and 3 others
Upvote 0
Show hidden low quality content
You must log in or register to reply here.