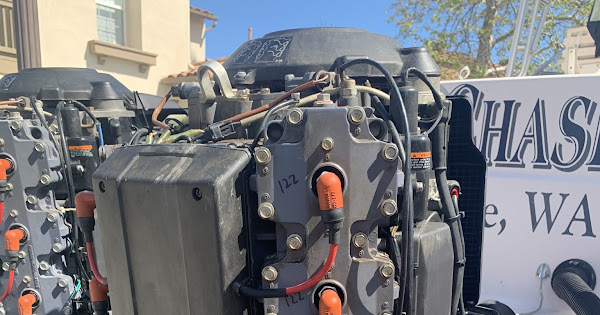 Recently repowered - selling my twin model year 2000 Yamaha Saltwater Series II OX66 250 2 Strokes with a third spare, all 25" shafts. Both engines run great. The third was a spare; it was my counter rotating port engine and started running rough about 2 years ago. Instead of having it fixed, I bought a new used engine to replace it with. I'm pretty sure it's just a coil or ignition issue, but either way, it's available as a spare or parts engine.

Just before removing the engines to repower, I took the pictures of videos shown. The engines are now crated and in my garage. I can deliver or ship for a fee. Mechanical controls, props, oil tanks and gauges available for extra.

Engine 1: $4500 - Model #SX250TXRY - Port engine from a Grady White Marlin 300 - has approx 650 hours, in very good condition and runs perfect. This motor was bought midway through the season in 2018 because my port engine started running rough and I didn't have time to diagnose and get it fixed (we were going on a family vacation with the boat a week later), so I swapped with this motor I found local on Craigslist. It had just over 550 hours on it from previous owner, as shown on his hours meter. Motor has been flawless. I did keep the standard rotation lower unit that came with it on it. Compression (marked on each cylinder in pics) taken just before decommissioning: 120-122-118-118-120-117.

Engine 2: $3500 - Model #SX250TXRY - Starboard engine from a Grady White Marlin 300 - has approx 900-1000 hours, but this is a guess based on use since the boat doesn't have an hour meter. Bought this engine with 200 hours on it in 2007 to upgrade the original 225s on the boat and have used it approx 50 hours per year. I have never had any issues with this motor since I've owned it. Recent maintenance includes new low pressure fuel pumps, cleaned O2 sensor, new plugs, and new coils. Compression is marked on each cylinder and was taken right before decommissioning. Readings are 122-122-118-118-120-117.

Engine 3: $2000 - Model #LX250TXRY - Original port engine from my Grady White Marlin 300, that was removed 2 years ago due to not running right, and has been kept as a spare since. No lower unit. I believe the issue is a spark issue, most likely a coil.

Prices are for engines only, no props or rigging. The props, rigging, spare lower units, hydraulic steering, etc are all for sale too - I have 6 props: 2 yamaha 19M standard rotation and 1 counter, 15 1/4" diameter; 2 17M/ML pair 15 1/4" diameter (standard and counter), and 1 other 19M but looks like smaller diameter - all stainless. I have complete rigging for a twin engine setup, 2 remote 2.5 gallon oil tanks, and twin setup of yamaha round digital gauges (2 tach, speed, fuel management). I also have the seastar hydraulic steering cylinders and tie bar. Also have 3 spare lower units, 1 is counter rotating from an HPDI, but works fine on these engines. Gear ratio is slightly different so the RPMS are slightly higher (about 200 rpms) with the same prop. Other 2 are standard rotation from a pair of mid 90s model carbed 250s. Also have an extra cowling. All parts negotiable and I would make a deal on a package with everything I have. 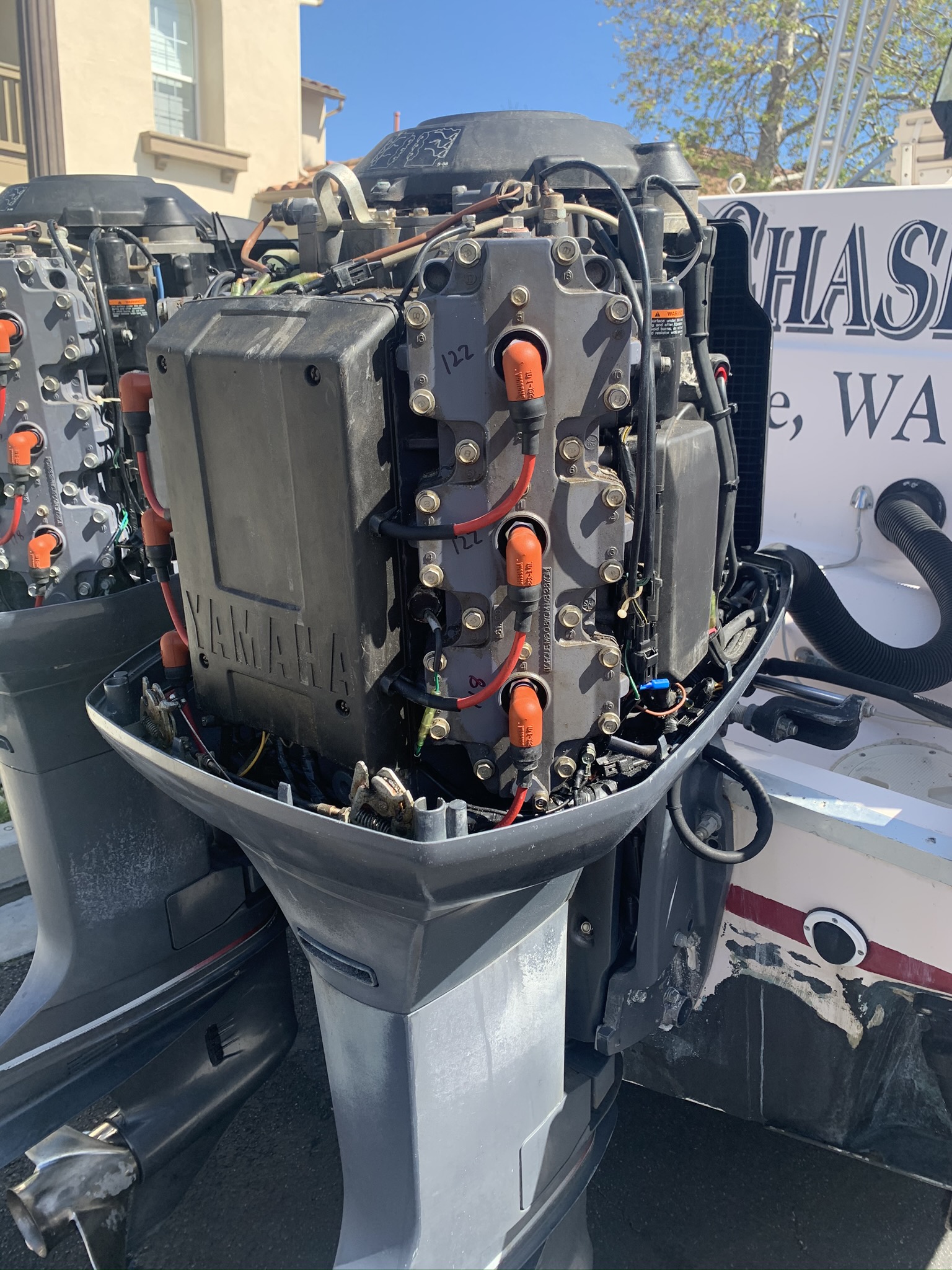 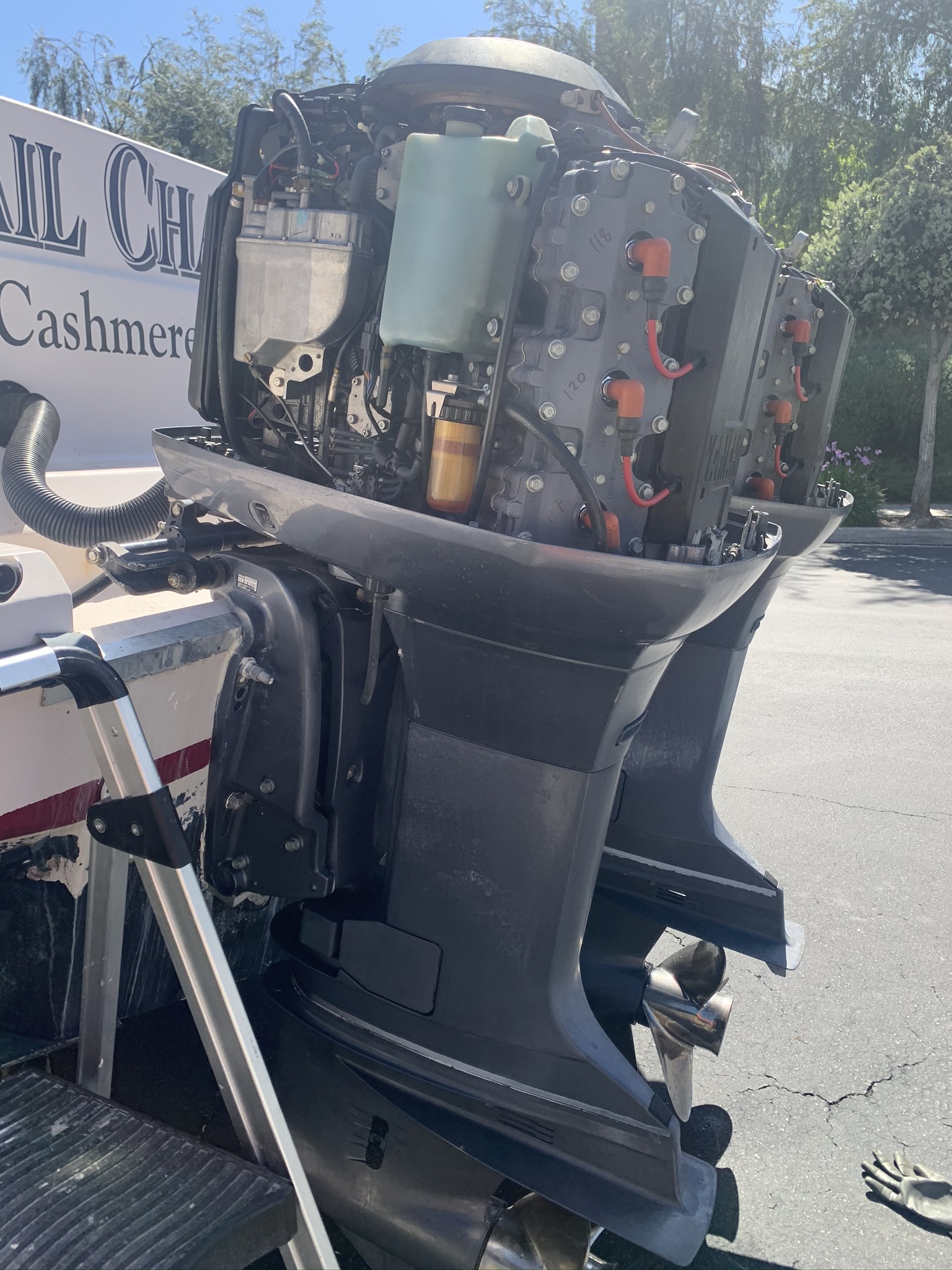