I currently have a 3-in-1 ducer that works great for side scanning structure. I want a clearer picture on the sonar, so I’m looking to add one of the flavors of the 175HW (B or SS) with the Navico/Xsonic connector on it.

I have two 9-pin transducer ports, one blue (channel 1, port 6) one black (channel 2, port 7). The install manual clearly states the 3-in-1 needs to go on channel2/port 7, which is where it is currently connected. See attached picture.

Can I attach the 175HW to the blue port (channel 1) and will the ducer be recognized? Kinda looks to me that both ducers need to go to port 7. I called Lowrance, and whoever they farm their tech support out to were clueless—tried two times. Called Airmar. They said call Lowrance

Can I run these two ducers simultaneously? Need the 3-in-1 for structure scan and the 175HW for up and down.

A bud does exactly this on an EVO3, with the Airmar on the Blue/Channel 1 port. Problem is, on the Simrad at least, both ports seem to be Xsonic. Not sure if that’s the case with the Lowrance. The Black port (Channel2) is Xsonic, but I’m not sure about the blue (Channel 1) port. See the picture of the ports. 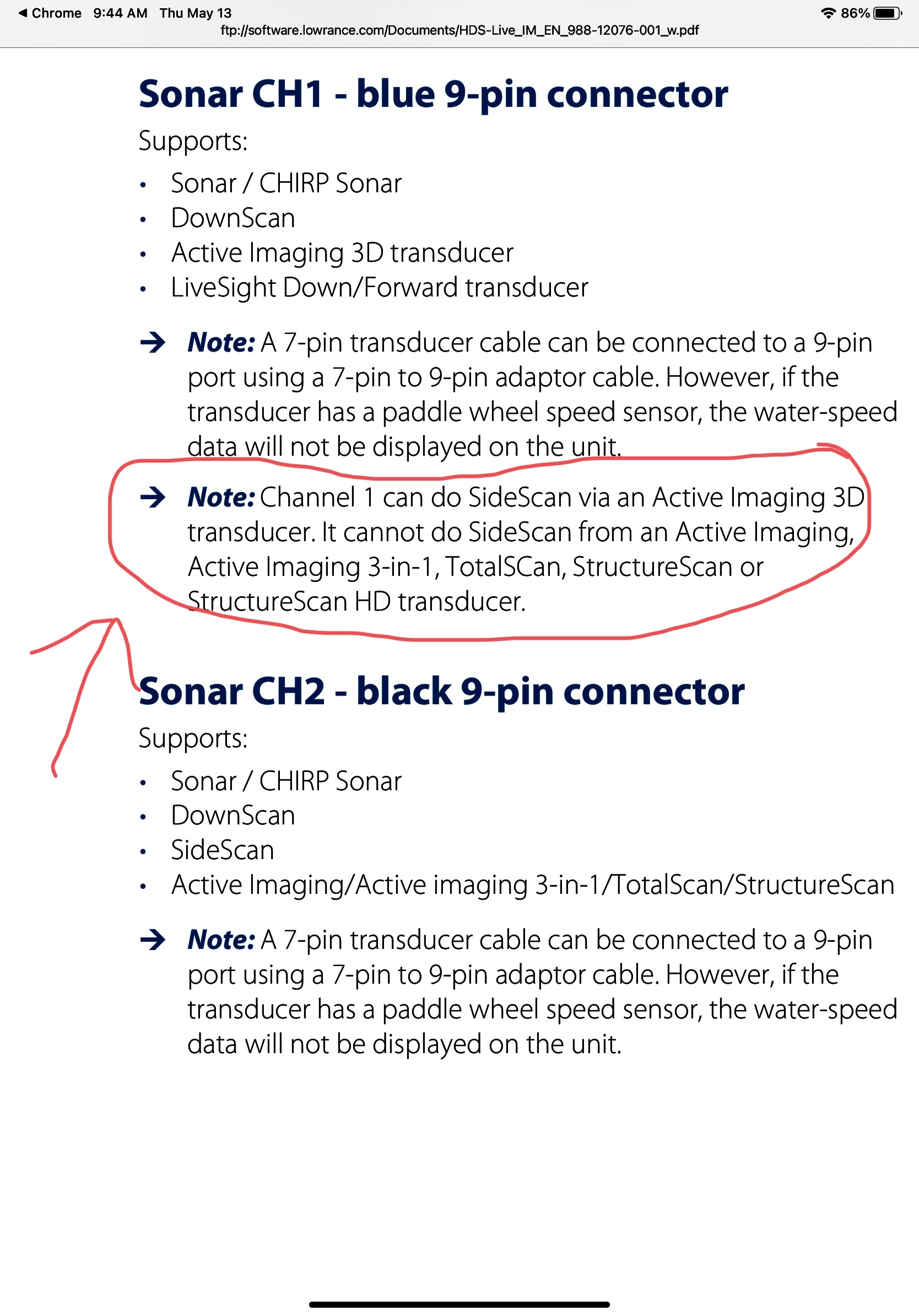 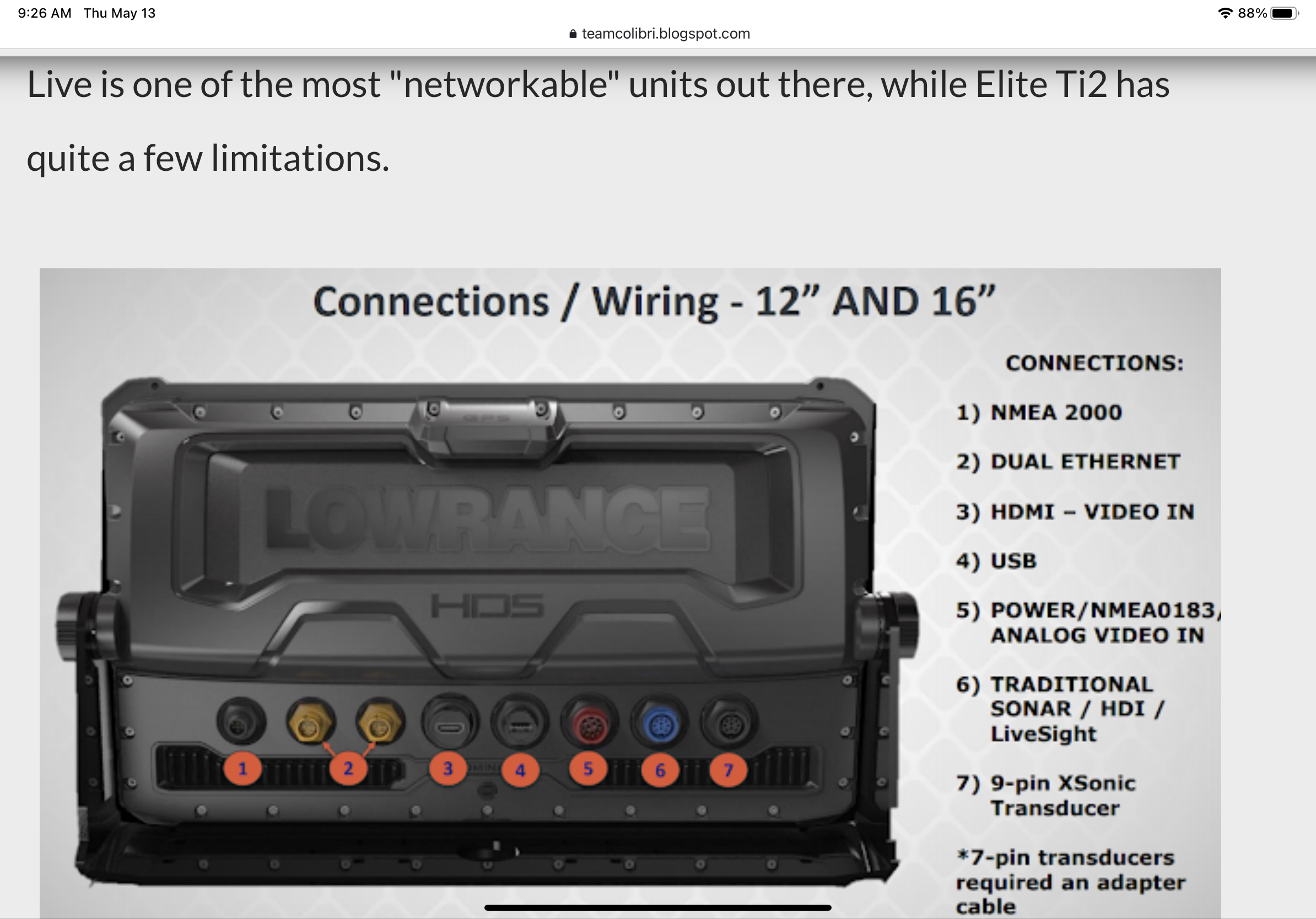 AI will got in black port, HW in blue port. They are both 9 pin not 7 as someone mentioned above
Upvote -1
S

AI will got in black port, HW in blue port. They are both 9 pin not 7 as someone mentioned above
Click to expand...

You have to be careful when you compare your Simrad to the Lowrance unit. They use different connectors.

Look at the back of his unit. On the Lowrance HDS12 Live series, the second port from the end (port 6) is still a blue port. The 9 pin connector will not fit. On your Simrad EVO3 series and higher, they changed both transducer to 9 pin connectors. The EVO2 series still had the blue connector on one port.

As for interference from the 3-to-1, you can always selectively turn off a transducer on the menu screen. When you are in the sonar mode, you can select which transducer to output the signal.
Last edited: May 14, 2021
Upvote 0

I have a HDS live 7 and just plugged in my 3 in 1 and an airmar TM185HW and have no issues running both at the same time. You should be fine.
Upvote 0

Kman said:
Thanks guys. I just ordered the SS175HW with 20 degree tilt and Navico/Xsonic connector.
Click to expand...

I don't doubt what you are saying because I don't have an HDS 12 Live to look at but I do have 3 HDS 7 Live and the Blue and Black connectors are identical. Any transducer that fits in one, will fit the other. I currently run an Airmar TM150 with the black 9 pin connector and it will fit in both the black and blue connector on the back of my units and the transducer is recognized and automatically selected in the install menu no matter where itis plugged in.. Seems strange that it would be different on the 12 vs the 7 of the same family.
Upvote 0

My blue port 6 is 9-pin and the 3-in-1 physically connects to it-though it won’t work on it.
You say it won’t work. Abbor at The Hull Truth says it will. We’ll see who or right.

Thanks everyone for your input.
Last edited: May 14, 2021
Toggle signature
Whorehouse Piano Player
Upvote 0
S

Kman said:
My blue port 6 is 9-pin and the 3-in-1 physically connects to it-though it won’t work on it.
You say it won’t work. Abbor at The Hull Truth says it will. We’ll see who or right.

If its a 9 pin, you are good. Most of the blue ports are 7 pin ports. Lowrance really need to stop doing that because generally the blue is the 7 pin connector and the 9 pin are black. I just zoomed into the picture and it looks like a 9 pin connector. It just creates confusion when they color code the 7 pin as blue and also the 9 pin.

Arbor knows his shit. I don't have the HDS Live. I have the HDS12 Gen3 and the blue connector is 7 pins. I have no idea why Lowrance kept the color blue even though its a 9 pin connector now. That is just plain stupid.
Last edited: May 14, 2021
Upvote 0

OK, so to bookend this, the beast (SS175HW) arrived today. I plugged it into port 6, turned the unit on, went to Setup, Sonar, Installation, and the ducer was recognized

I renamed the source SS175HW and renamed the other source 3 in 1. Now on the sonar screen, my source choices are the name of the ducer rather than Ch1 and CH2. 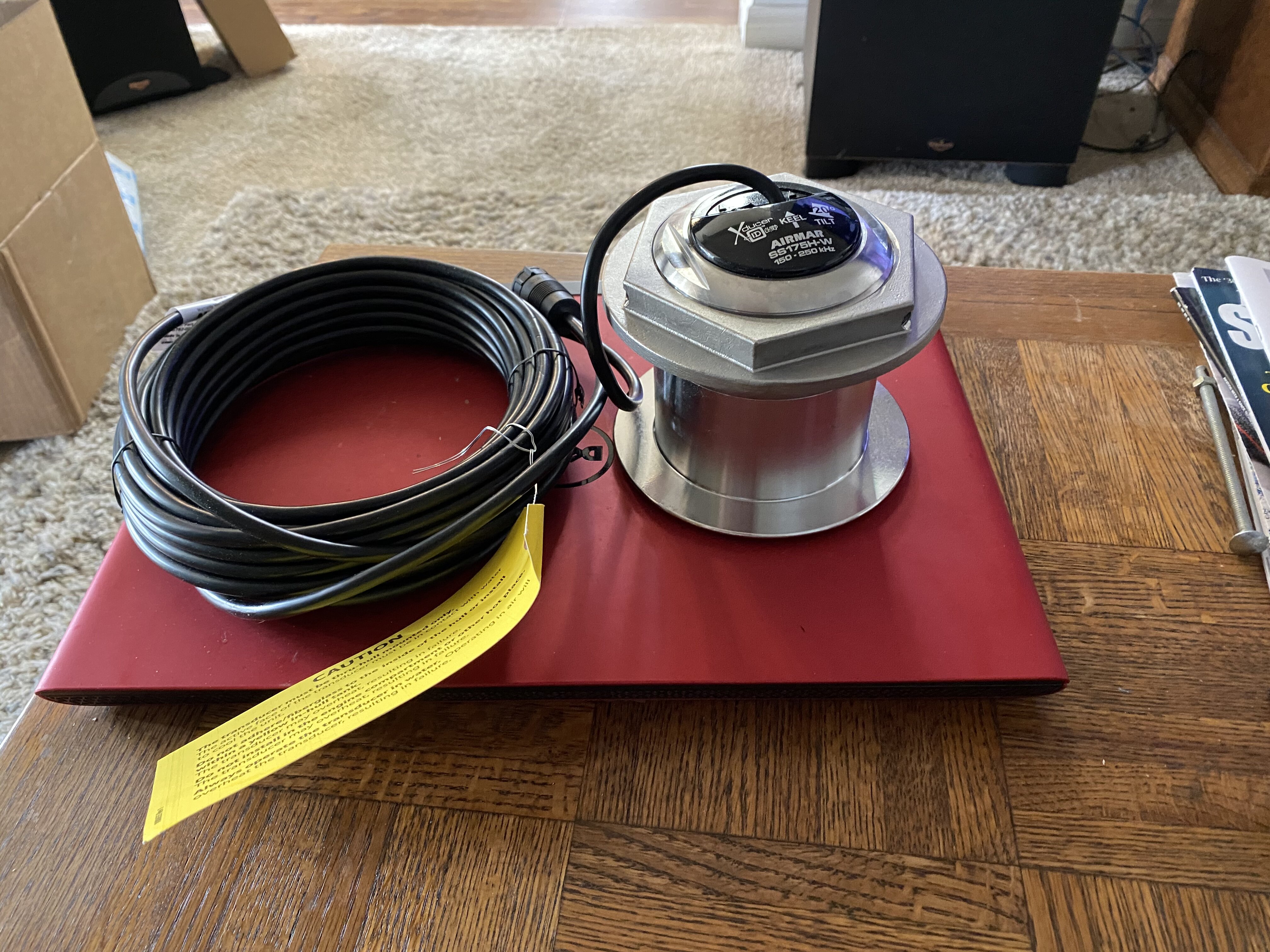 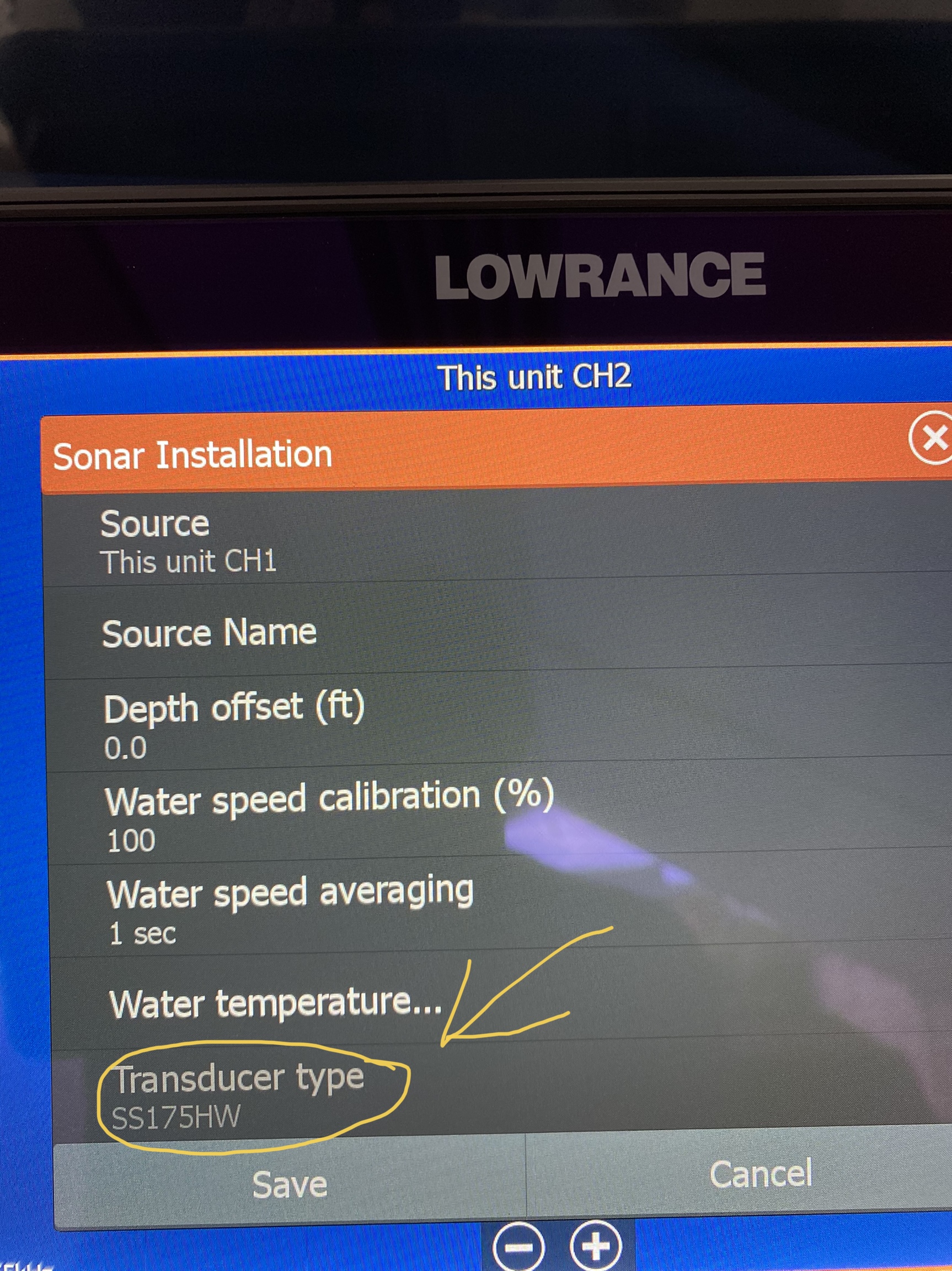 Nice! I have the same setup but with a simrad evo3. Dont forget to pause the transducer when loading the boat to prevent burning it out when using the fish finder on the trailer. Could be an expensive error. Might not be an issue with the 3 in 1 but the 1 kw 175hw is a different animal.
Reactions: Shon and fly liner
Upvote 0
Show hidden low quality content
You must log in or register to reply here.

Mounting B175HW ducer with the fingertips of one hand?

Redemption Near Izor’s and the Shoe 1/31