I have not been on a multi day trip in some time. Most of my fishing is done on my own boat. Put deposit down on this one 6 months ago with my buddy Mike. The short of the story is that it was a fun trip with a great group of people. Headed out 10am on the 28th. I was stoked to hear from the crew that we would be heading due west to Tanner looking for BFT's. Looks like we lucked out with a weather window as well. Loaded our gear on the boat and off we went around 10:30am. Got a good amount of bait at the barge and set a course due west. I knew from my own experience we would make it to Tanner roughly around 9pm...time to fish the night bite with the knife jigs and flat falls.

Great easy ride out to the grounds allowed the crew and passengers to get to know one another. Great food from the galley and plenty of room on this boat to stretch out and find your own space if you wanted it. Accommodations were two to a cabin with two cabins on the main deck and the rest down below. 24 limited load was awfully nice on a 95ft boat.

We arrived at the grounds right on time, Capt. Aliyar was spot on. The search was on. It wasn't long before Aliyar found a school he wanted us to play with. Plan was to use the jigs and cast down wind, letting the jig free fall down the water column to the depth we had been told by Aliyar. It was slow in the beginning, First stop I landed the only fish on the boat and by the way my first fish on the knife jig. Fish hit the jig on the down drop. I think it was around 25lbs or so. Excited to get the skunk off the boat and off myself. Second stop, same thing, Knife jig and I was the only passenger to get a fish. Similar size. Well we continued to fish throughout the night. At around the 4th or 5th stop another guy hooked up on the knife jig and he was bent big time. I knew this was larger than what I had caught. After a good fight around the boat a couple times 4 gaffs later, over the rail comes a 150+ BFT. I was stunned, I had never seen a fish this size landed. Great teamwork by the crew and passenger that wrangled it. On the very following stop another passenger hooks up, again rod bent over pulling drag. Crew did an outstanding job in my book coaching the passengers how to fight these fish. Next big BFT comes over the rail...this one closer to 200+. The rest of the night had a couple smaller models and it was off to bed.

The next day was spent trying to get fish to bite off of bait, using various techniques weighted, butt hook, belly hook, traditional nose hook...it seemed we would pick one or two fish every hour but nothing to write home about. Well that all changed in the late afternoon. The wind came up and so did the kite with the balloon. What happened for the next hour or two was extremely impressive. First blow up on the kite was like a freight train hitting a car. Fish on...the boats system was everyone's number was put into a hat. They picked the number from the top deck, handed the rod down to a crew member who was assigned to assist. Well first fish was given to someone and off they went around the boat. Several people kept bait fishing, but soon after the first kite fish was hooked another frozen flyer was sent out. Within 5 minutes another fish was hooked up off the kite. Two going at once. Pandemonium with this fish on the bow and one on the stern. It was great to hear each passenger cheering on whoever was hooked up. The crazy part is they decided to put up two kites, now we had two flyers dangling in the water. It wasn't long before the first fish hit the deck. 150 or so. Shortly after that another hook up on the kite. This kept going for about an hour and half never moving the boat just drifting. In all I think we landed 8 or so big BFT's. One of them being landed by an 11 year old girl with her dad. Riley was her name she was a tough little girl, she cranked on that reel and didn't stop until her fish was pulled over the rail. Unfortunately, my number or my buddy's number was not picked on Day 1. Her fish was the largest I have ever seen which taped out to 310lbs.

Night fishing was uneventful as only one small fish was landed.

Day 2 started out very much like day 1. Finding schools, throwing bait. I was able to hook another fish on the smaller end of 20lbs or so. It wasn't the lights out fishing by any means. I have to give Aliyar credit, this dude is serious about fishing. I appreciated his approach and seriousness in finding/catching fish. Sounded like other boats were not doing great either. I was waiting for him to find the school and send the kite up. Well just as I anticipated, mid day the kite and frozen flyer made its appearance. Although we didn't have the same craziness as the day before, we did manage to get I think 7 more fish off the kite, including one of the last to my buddy Mike. Stoked that he had the opportunity to pull on a big boy. All fish were in the 125 - 250 with the exception of the big boy that Riley caught.

We had one more night of fishing. I was hopeful I would be able to land a big boy off the knife jig. I put my time in and on the very last stop I hooked up. Line pulling like nothing I have seen off my Avet HX Raptor...In gear and three seconds my fish was gone. Bummer...oh well. That's fishing.

What I will say is I learned so much from the captain and crew on catching and landing these big BFT's that I am much better armed to try and do this on my boat next year. I am not saying I am guaranteed anything but much more educated to do more of the right things than the wrong things.

Weather was great for the time out there, water was blue, temp around 63 degrees.

I highly recommend this boat and crew. Looks like they are booked solid for next year already, I now understand why. 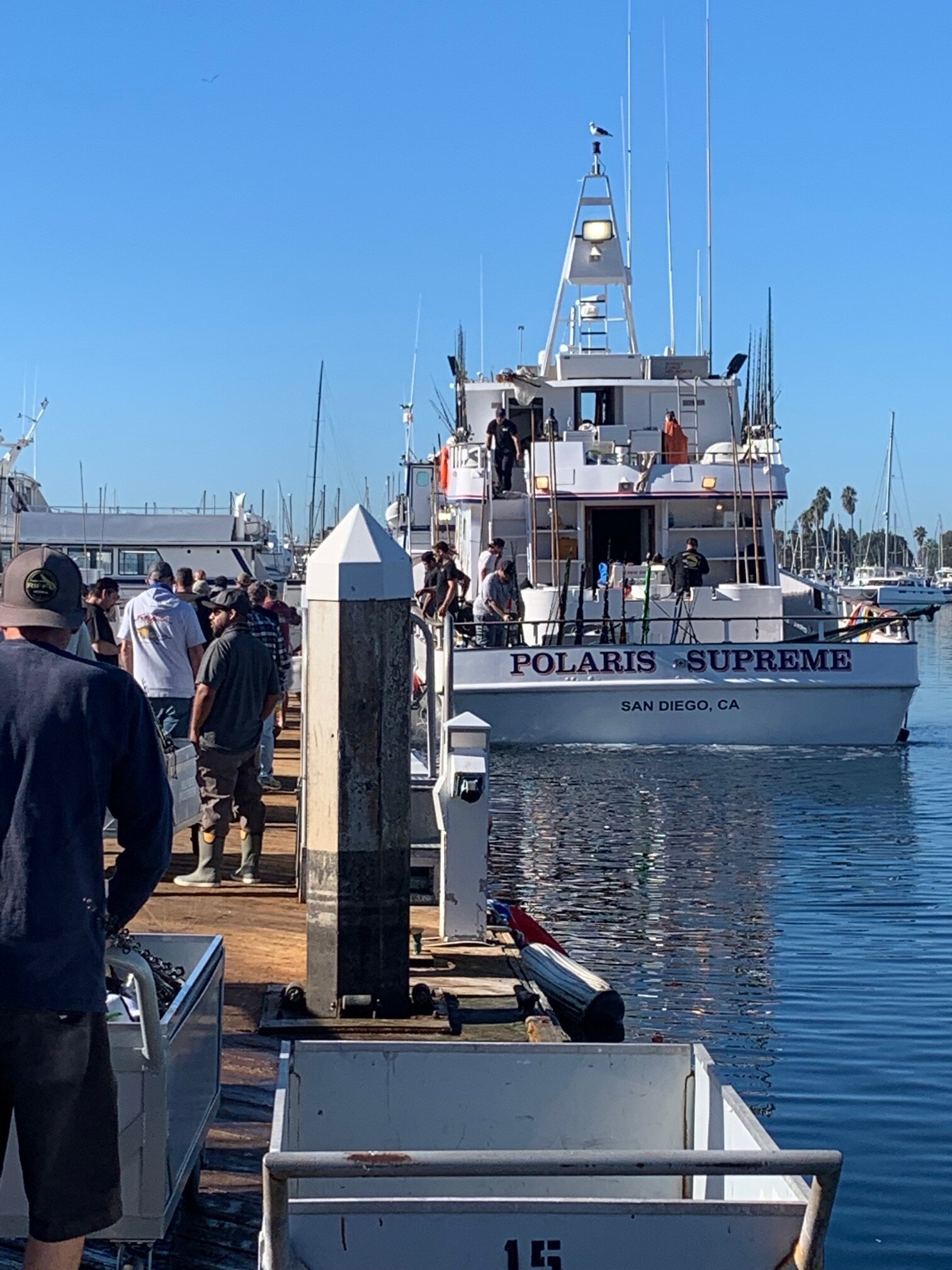 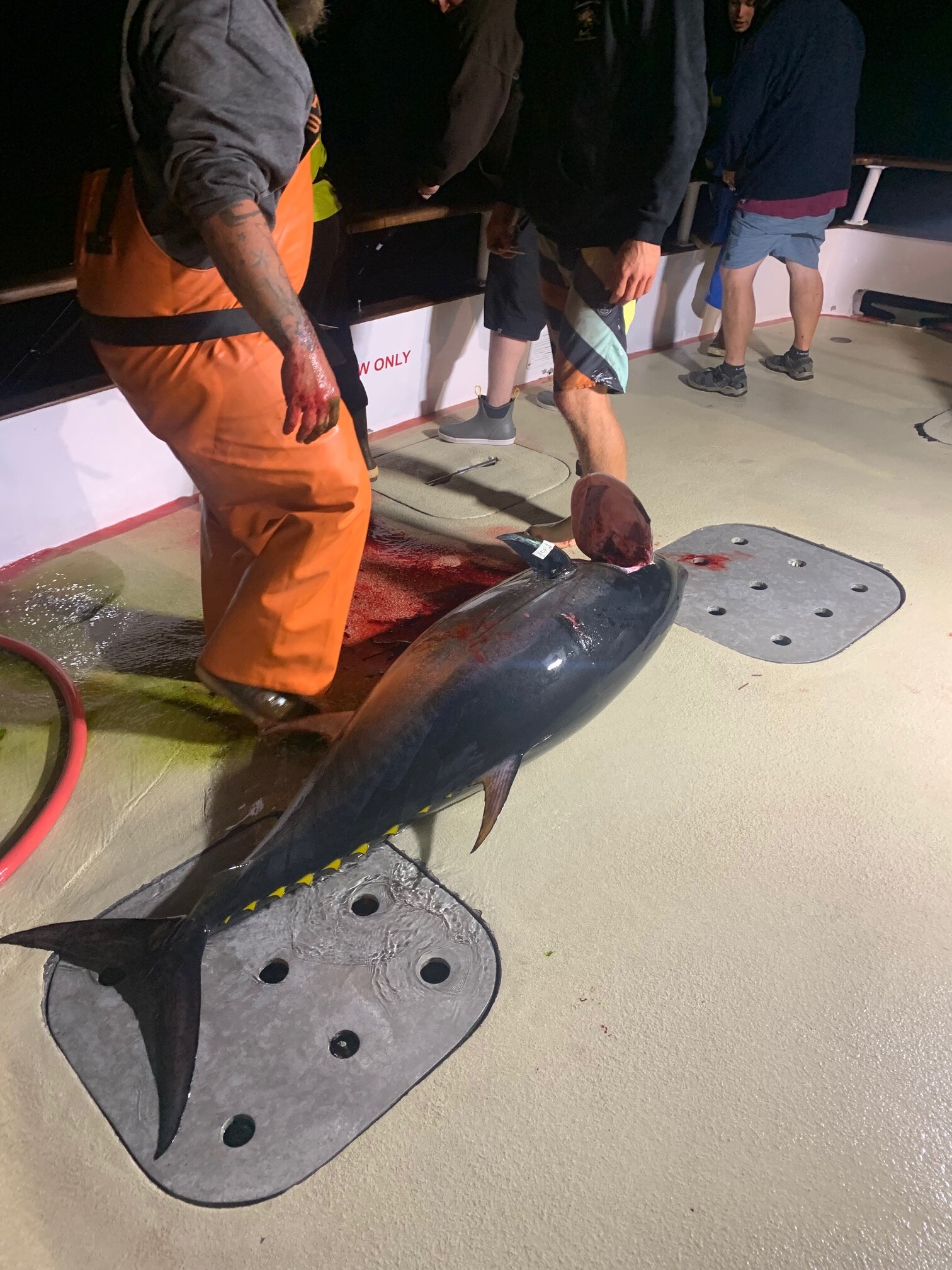 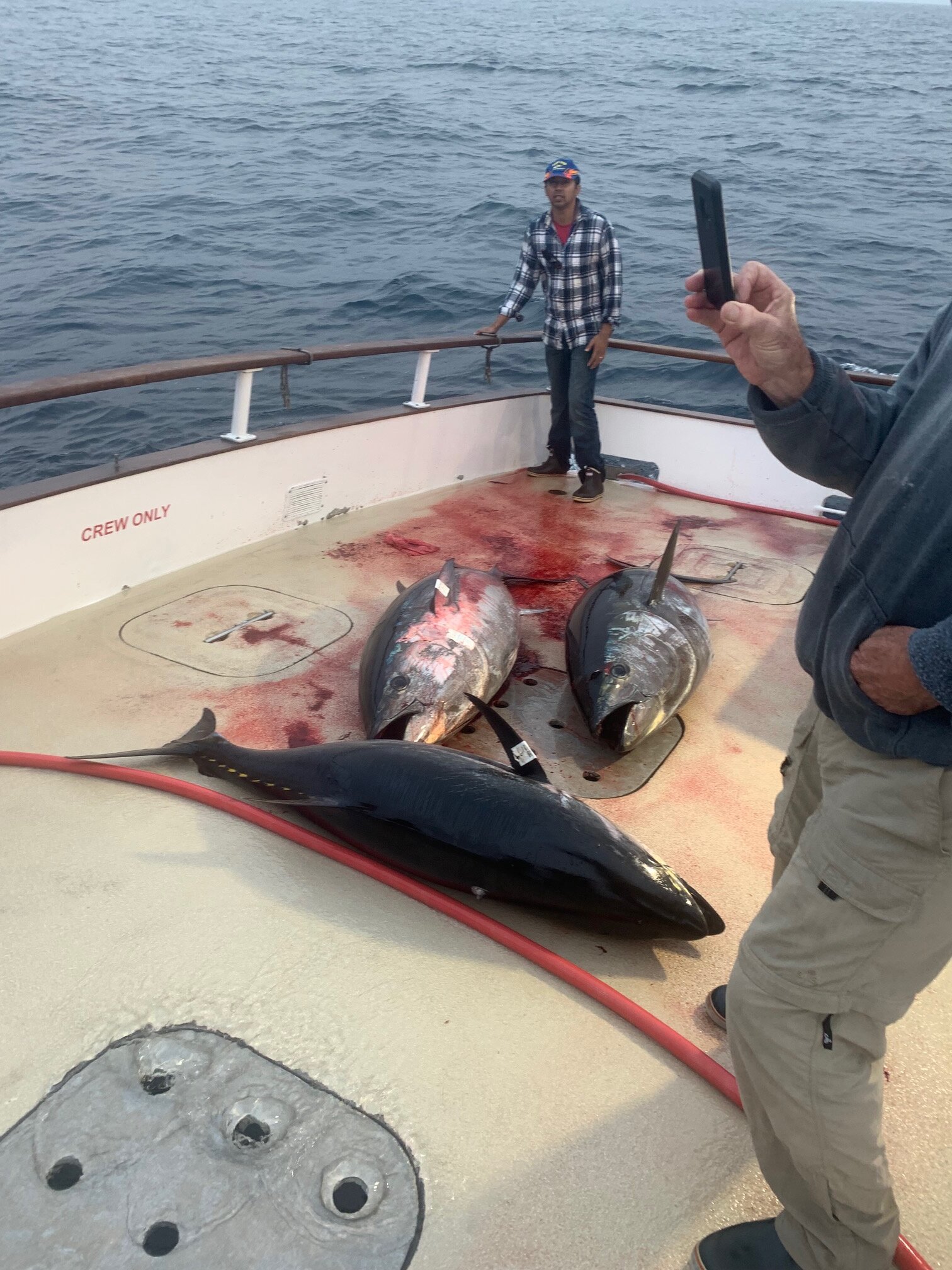 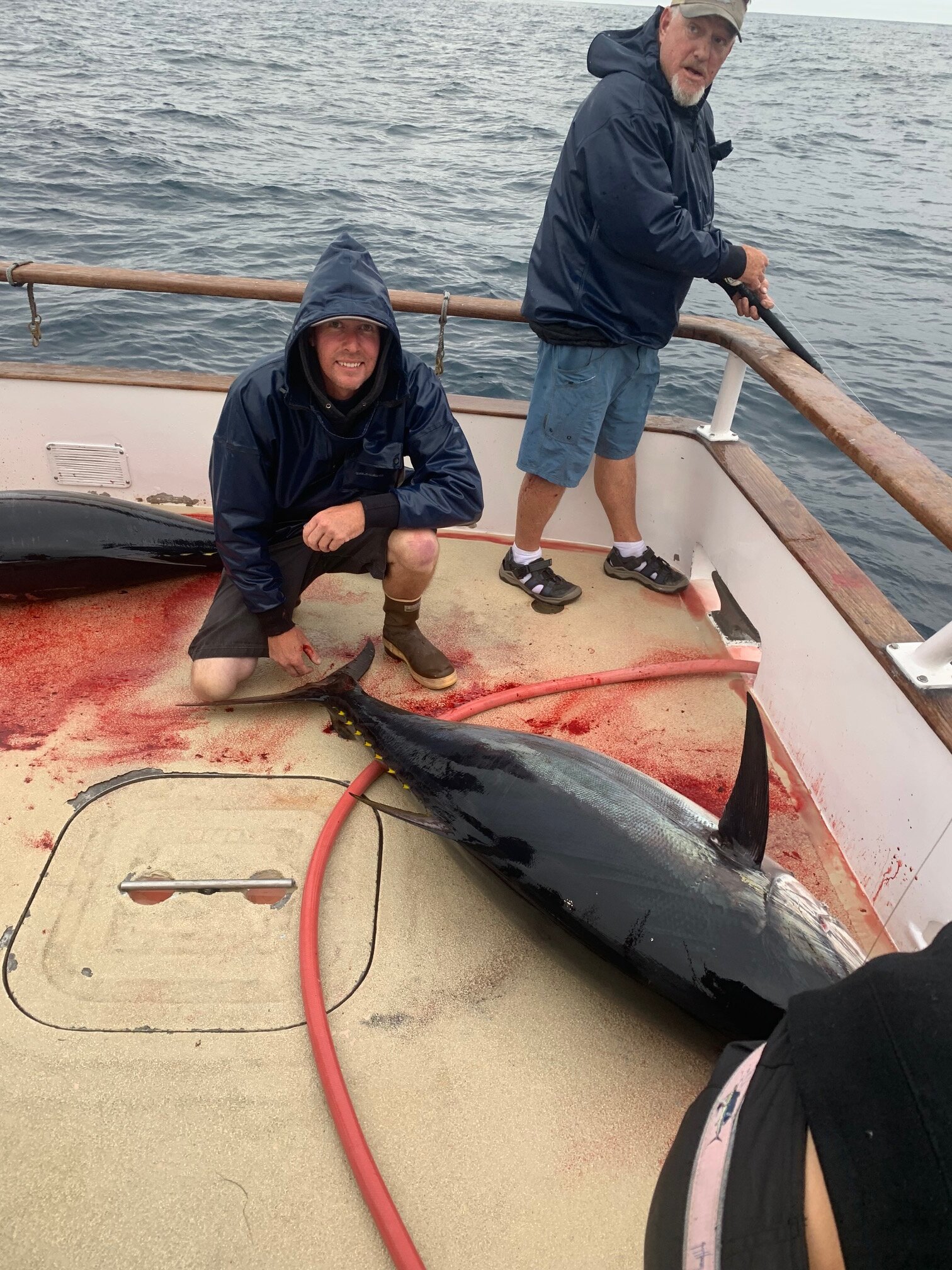 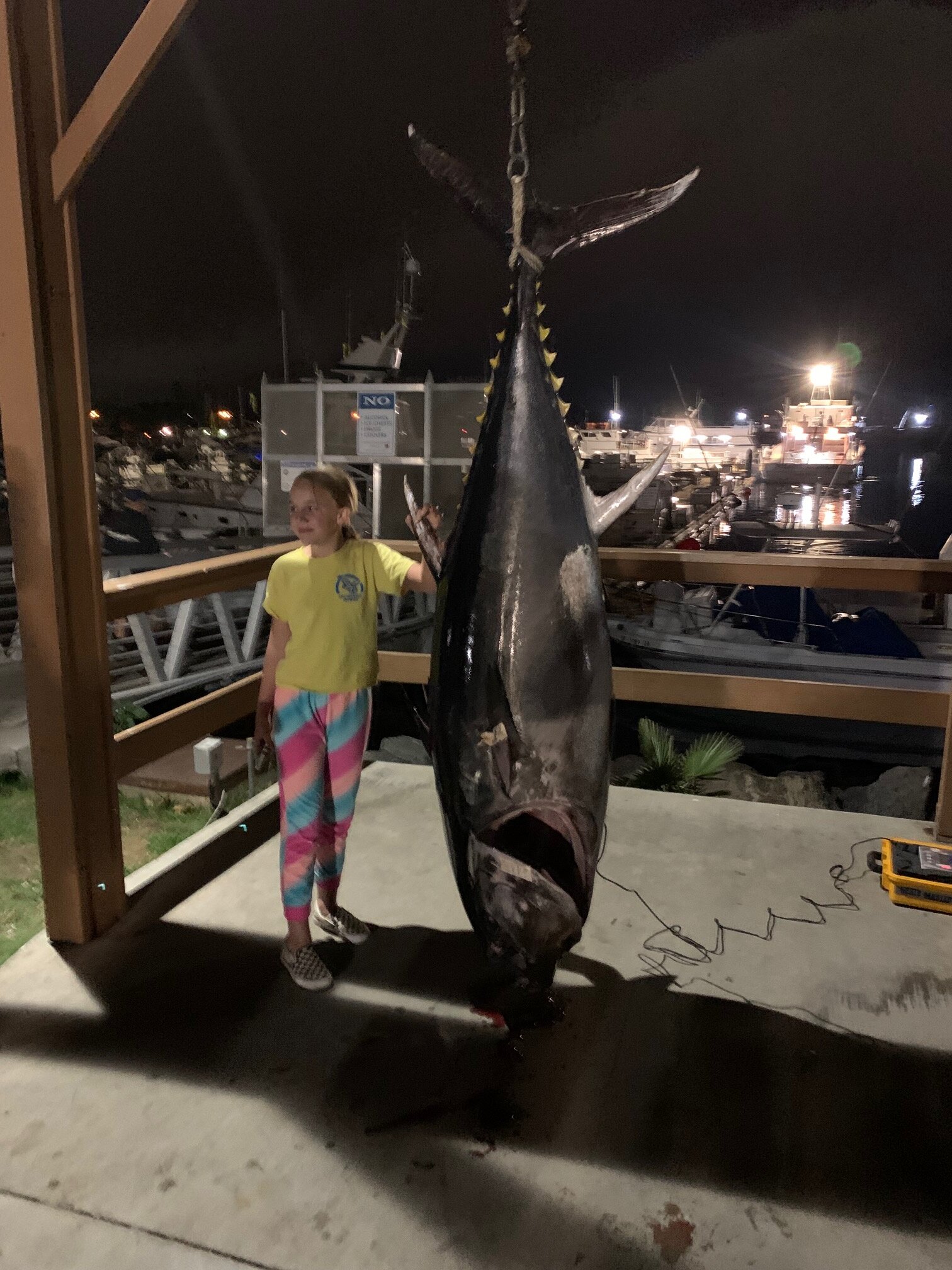 Congrats on your catch! Thanks for sharing your report. Aliyar and the crew

Great report and looks like it was a great time!! I've seen pic of the big fish that Riley caught on IG. What a tank!!! Leaving on a 2 day next week on the Aztec and can't wait!!
Reactions: Tuna Dreamer, Tunahead and fishincrazy
Upvote 1

Thanks for the report. Nice pictures.
Toggle signature

Thanks for the info
Toggle signature

Great Report/info/pics Mark, and NICE FISH.
Congrats to 11yr old Riley and her 310lb BF.
Lot of nice fish. Glad you all had a good trip.
Reactions: Tuna Dreamer and fishincrazy
Upvote 0

ps Best part...you had a weather window
Been snotty out there lately. TC
Reactions: Tuna Dreamer and fishincrazy
Upvote 0

Any tips you could point to that led to you hooking up on the jig?

I've been on multiple trips when people have been catching jig fish deep but I've never connected.

djcase said:
Any tips you could point to that led to you hooking up on the jig?

I've been on multiple trips when people have been catching jig fish deep but I've never connected.

Capt. Aliyar stated throwing the Jig down wind, let it fall to your feet then wind up. Three of my four fish were caught on the jig falling, not on the retrieve. Hope this helps.
Toggle signature
MADDOG
Reactions: Tuna Dreamer and djcase
Upvote -1

That read like one insane trip.
11yr old? WOW!!!!
Reactions: fishincrazy and Tuna Dreamer
Upvote 0
A

Super Cow BFT are for girls

Going out on the Polaris Supreme November 21 for 3 days. Hope we have the weather you experienced. The bite has slowed down compared to the past few years but tuna gods willing, the cows will show up for us. Never caught a kite tuna so fingers crossed. My first trip this past spring on the PS was crazy good. See my post “The Unicorn Trip”…. Would be lucky to repeat!

I was on the following trip on the PS. We got a total of 53 bft's. Largest was around 207. Great quality of fish. Lots of 75-125#ers. Asked the deckhands about Riley and the 310. They all said she was a real trooper. She stayed on the handle the whole time!
Upvote 0

slowhaler said:
I was on the following trip on the PS. We got a total of 53 bft's. Largest was around 207. Great quality of fish. Lots of 75-125#ers. Asked the deckhands about Riley and the 310. They all said she was a real trooper. She stayed on the handle the whole time!
Click to expand...

It was awesome to see. The entire boat was behind her...rooting her on. Great to see the younger generations getting into this sport. Congrats on your trip.
Toggle signature
MADDOG
Upvote 0
Show hidden low quality content
You must log in or register to reply here.