Sorry for the late post boys (and girls!), but way too much to do these past couple of days getting ready to head out on another 6-day trip with United Airlines to sit down at the computer. As we all know, conditions can change dramatically from day to day offshore; especially this time of year; and even a short, more timely report with sightings and water temperatures is better than one with a myriad of details and plethora of photos a week late. Apologies!

It was an early get-up on Wednesday, and I made it off the dock solo from Dana Point just before 5am, and began the trek to the 209 in the dark. Navigational stars soon disappeared as a marine layer blanketed the waters, leaving GPS and compass to guide the way. About three miles out, I cut through an area of intense bioluminescence, my panga leaving a bright green-blue wake behind as she parted the waters. A school of dolphin soon joined the party, and I have to say that it was quite a sight to see their comet-like profiles lighting up the water all around the boat, for hundreds of yards in every direction! Made the day worth it all by itself, with the light show going on all the way to the break of dawn. Inshore temperatures were between 68.6-69.4*F.

I arrived in the vicinity of the 209 in the gray light just after 6:30am, and set up a patrol pattern with 1/2 mile by 2 mile course reversals, but didn't find any kelp, mammals, birds, or fish. Water temperatures were 70.9-71.5*F, but the slack tide wasn't facilitating any vertical movement of nutrients in the water column (water deflecting towards the surface as it strikes the sea-mounts) and there was to be no love. I held station until 8:30am, before heading northwestward towards the 277.

Seas remained pretty flat (1-2') as I continued to look for fish on the way. Current lines became easier to find as a light SSE breeze rippled the surface, and though I found several good strands of kelp on the way to the 277, none held gamefish. Most had plenty of bait, and one, a school of 8-10" juvenile yellowtail.

Around 10:15am I spotted a good pod of dolphin working bait, and got ahead of them to drop some iron on tuna that metered below. Got in a little too close on my first pass, and EVERYTHING dropped out of sight, even though my engine was off. The school resurfaced fifteen minutes later, and it was "game on" once again! This time I swung wider, got even further ahead, and was all set to cast to the tuna when a couple of guys showed up out of nowhere and ran the whole mess over from behind, putting the fish down once again (sidebar - as I was taking out later in the day back at DPH, I did get a chance to talk to one of the guys who had screwed up the fishing, and was able to discuss etiquette and tactics without getting too worked up. As you all know, it's definitely tough out there, with lots of new folks out in boats; most clueless, and some who just don't care about manners - you know the ones!).

The boat left as quickly as it had appeared, so I decided to wait out the fish again, rather than search out another school. The dolphin were back on top within twenty minutes, now about 4miles SSE of the 277 (bearing 155*). They were herding the bait in circles, making it difficult to figure out where they were heading, so I decided to stand off and watch until they either moved in a set direction where I could get ahead of them or the fish surfaced and joined the fray.

While I was surveying the dolphin feeding patterns off to port, I took a moment to grab for a water bottle from the console, and spotted a large marlin finning along about thirty yards off my starboard bow. What an opportunity! About that time I was wishing I had a nice mackerel rigged up to throw to him, but the closest thing I had was a four-inch anchovy fly on my 14-weight TFO Ti-Cr fly rod, all ready to go in the casting bucket up forward. Definitely a little under gunned (ya think!) for such a big fish, but sometimes you just have to say, "What the f***," so I eased the boat gently into gear to get a better casting angle, and stepped up on the foredeck to take a shot at him. Just like bonefishing, right? There was very little wind, and my first cast couldn't have been better, with the fly landing about three feet from his left eye. The marlin absolutely lit up, turned on the anchovy pattern, and ate it in less time than it takes to tell the story - GAME ON! The (way too small) 3/0 circle hook somehow found it's way to the corner of his mouth as the line came tight, and the monster blew up some 6-8' into the air on his first jump, after running a good sixty yards of line off my fly reel in pretty short order. I bowed to the fish successfully, and got the panga up to speed and after him to minimize line loss. The marlin went airborne again seconds later, and again, dropping the rod sharply towards the fish preserved the moment. For a brief second I began to think that perhaps the 100lb. shock tippet would actually give me a fighting chance (no pun intended!), and my thoughts started to wander as to how I was going to play out this fish by myself; to actually get him safely to the boat for a good photo without either of us getting hurt in the process. The marlin settled the whole question on a third magnificent leap from the water, when his twisting fall back into the sea enabled his bill to entangle and part the weaker 30lb. fluorocarbon class leader tippet. All I could do was to take a seat while reeling in the now slack line, watching as the powerful fish made two more breathtaking jumps towards the horizon, obviously not happy having been fooled by the bunch of fluff and feathers still tickling his gums. Hard to say which of our hearts was beating faster at that moment, to be sure!

By11:50am the wind had filled in from the south at about 8-10kts., making for some pretty sloppy conditions as it ran against the flooding current and both cross swells. With not much else going on, I elected to head inshore to pound on some bass off the San Onofre domes, and was off the water around 6pm after working on a little bass-thumb!

Of note for the day, the sharp temperature breaks seem to have broken down after the turnover of all the water with the big wind and swells last week. The fish are definitely orienting towards structure, as evidenced by the parking lot out at San Clemente Island, so I would recommend looking for any areas or kelp that the baitfish will congregate to in the absence of temperature thermoclines. If SST's come up again next week to re-establish the gradients the bite just might take off again. Tight lines! 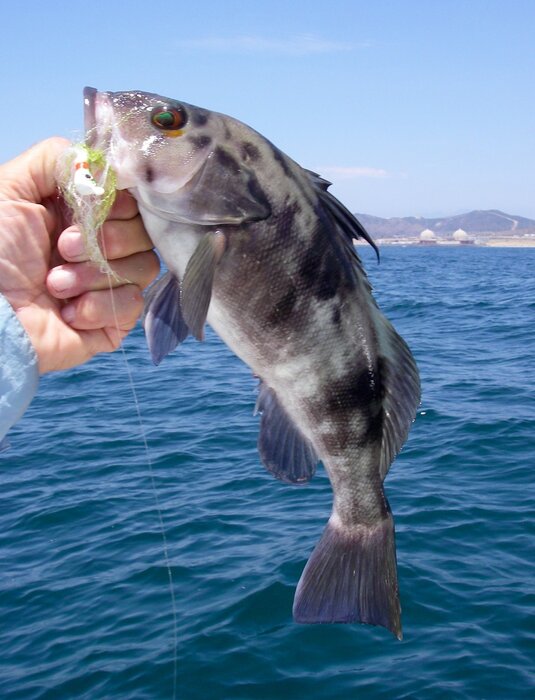 Excellent write up and read, stay safe out there solo!
Upvote 0

Bummer about the kooks, but you made a fun day of it. Well done!
Upvote 0

Wow amazing job presenting a fly to a local marlin and hooking it, that is really cool!
Upvote 0
Show hidden low quality content
You must log in or register to reply here.