So boarded, then left dock after 11 AM. At the bait receiver, did my usual and threw out a Charkbait 1.5 oz Megabait clone. Caught a 24" barracuda thus breaking the "skunk" for the boat before exiting the harbor.

Wind. No-go for the Rocks. Will head straight to the Ridge two days travel time down; the same back. Fish reports from other boats indicate fish had been up to 30 lbs...so 30, 40, and 50 lb setups...60+ lb was recommended for dropper.

For me, this meant the following (left-to-right): 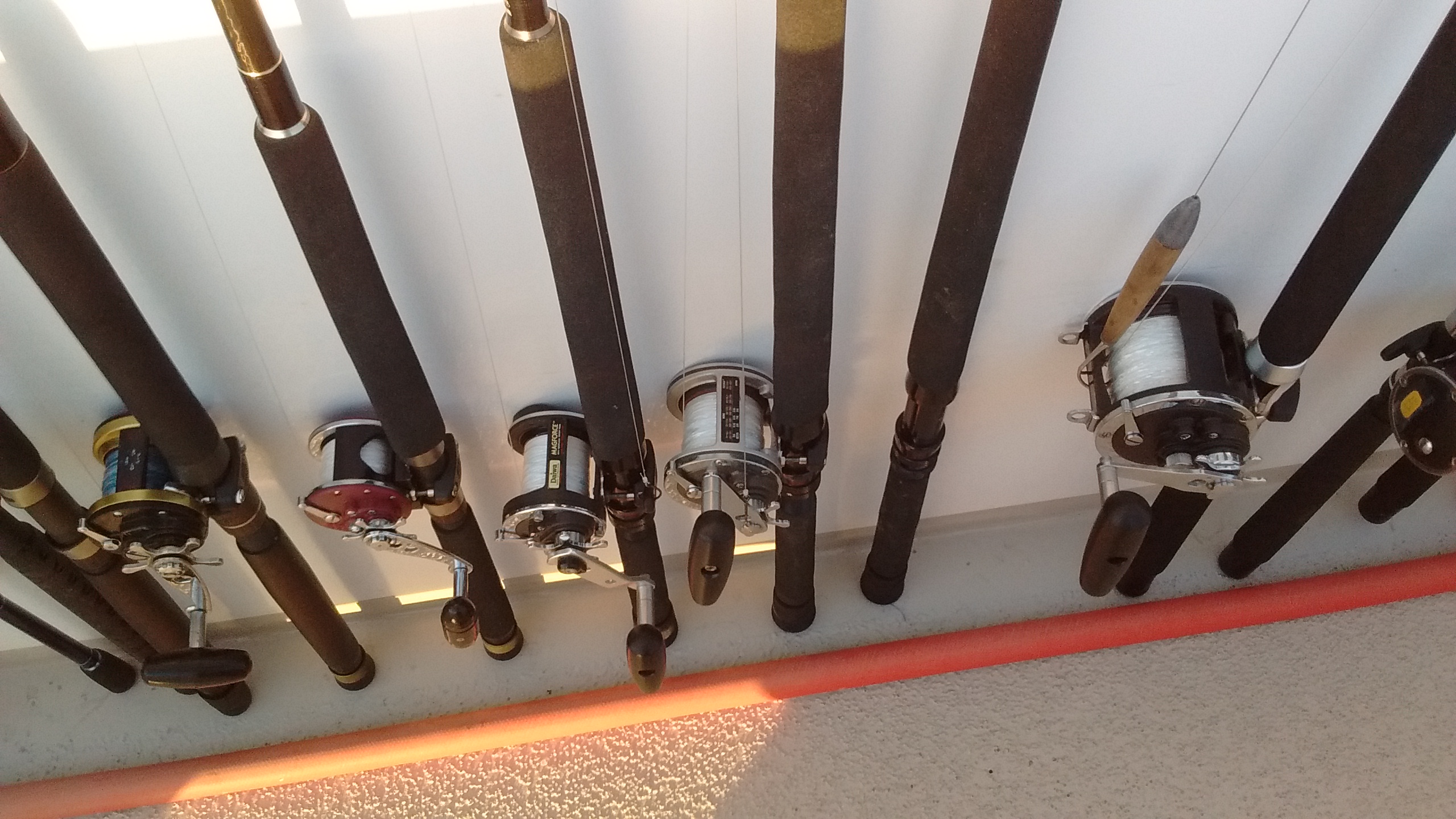 Why fewer conventionals than spinners? Because I'm a glutton for punishment.

The travel days were travel days. No need to go over those. Shot of windward side of Cedros on the way down: 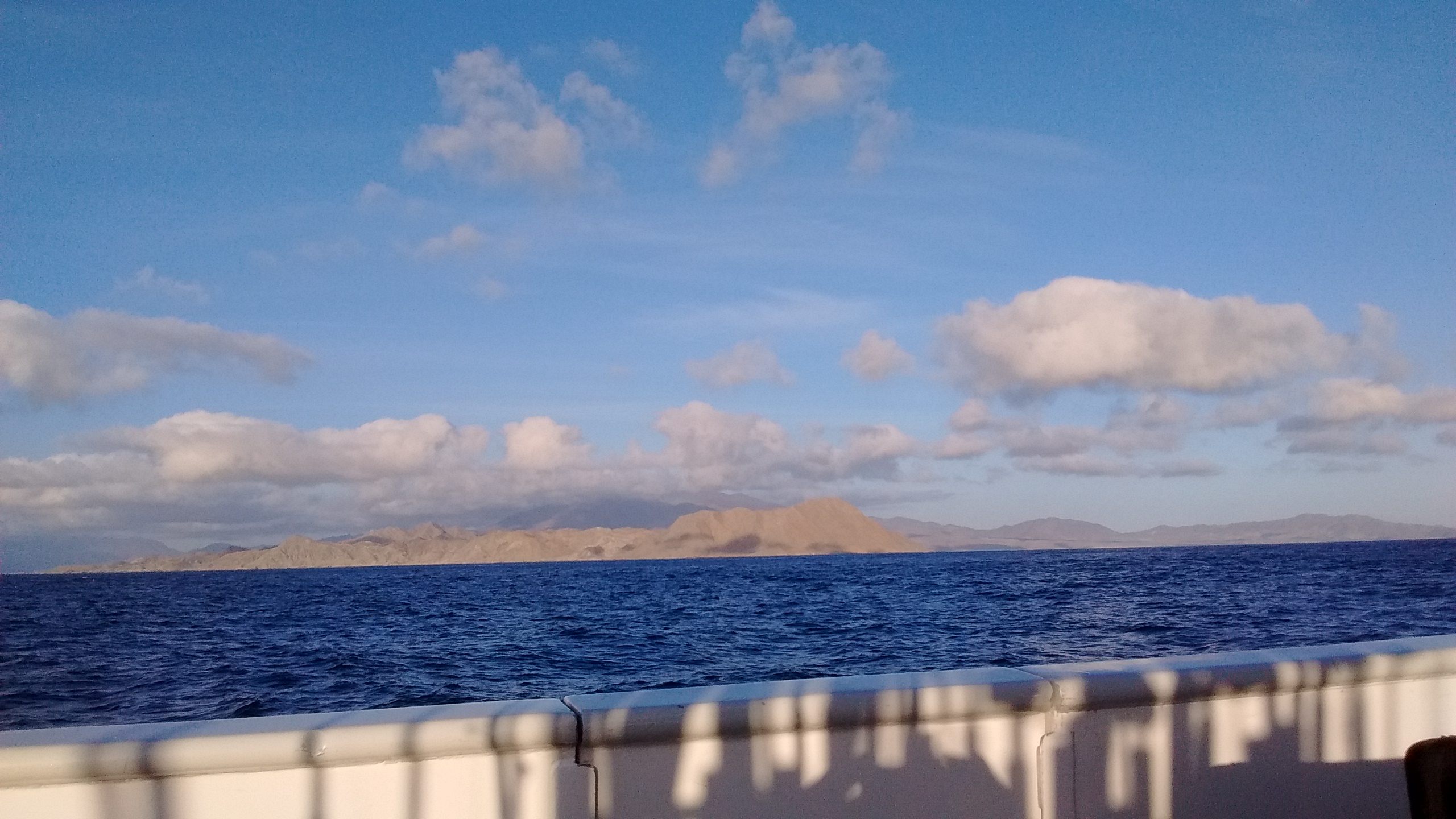 The four days of fishing got a bit blurry given the sun and heat. More than once did I hear "What day is it???" Said it mentally to myself a few times...so the following is not necessarily play-by-play, but close enough.

Arrived at the Ridge in the early AM, and started the troll rotation. Initially every troller had a Maurader. My first turn came up, so I switch the troller at my station with my Daiwa 600H and a classic cedar plug. No takers either; so took it out of the line up, and eventually a mix of mauraders and cowbells got 1 wahoo to react and was boated (it scaled 70+ lbs at H&M). At some point, one of Alan Tani's trollers with a new $100 marauder had its main line go "POW" and it was lost.

Evening fishing was a motley mix of skippies, bonito, dodos, and YFT; a few of the YFT were keepers. Skipper made the decision to run on down to Thetis Bank overnight.

Similar mix of fish seen the day before was again present. This round some dodos, YT, and YFT were keepers. All were on the smaller size. In the later AM, I got my first keeper YT on a dropper rig with the "113H" Tank (80lb). Still it was slow going overall so the boat was pointed back up towards The 23. Enroute, the second wahoo was picked up. The 23 was not any more productive than Thetis Bank so the decision was made to run back to The 13 and arrive early AM. Was also very warm all day.

Early AM started up with more activity than the previous two days with dodos, YT, and YFT, but still on the smaller grade side with a few exceptions. The third and final wahoo was picked up in between stops.

Steady fishing up through dinner time. I hit limits late afternoon, and handed off four YT before calling it a day right before dinner. Skipper then pointed the boat towards San Pablo for a slow, but reasonably comfortable overnight run due to the steadily increasing winds.

The AM was more rolly polly than any previous day. Made half-hearted attempts to hookup and hand off fish, but was only pulling up whitefish, sheephead, and even small calicos...not very productive. Personally called it a trip and started breaking down my gear just before lunch. Later stops yielded better grades of YT for the others still fishing. A little after 2 PM, the skipper called it a trip for the boat and begun the run to arrive at the leeward side of Cedros for calmer waters by dinner time so people's could stay down.

The low-down on gear

Having spent most of the 2nd fishing day with the Tank on dropper, I came to the conclusion that its uniqueness was to a point where I really questioned whether I would want to have an equivalent to fish on a regular basis. Maybe as a shelfie but not as a go-to reel...

My go-to knots were

The nail knot/nub variant I used for hollow core connections all held. 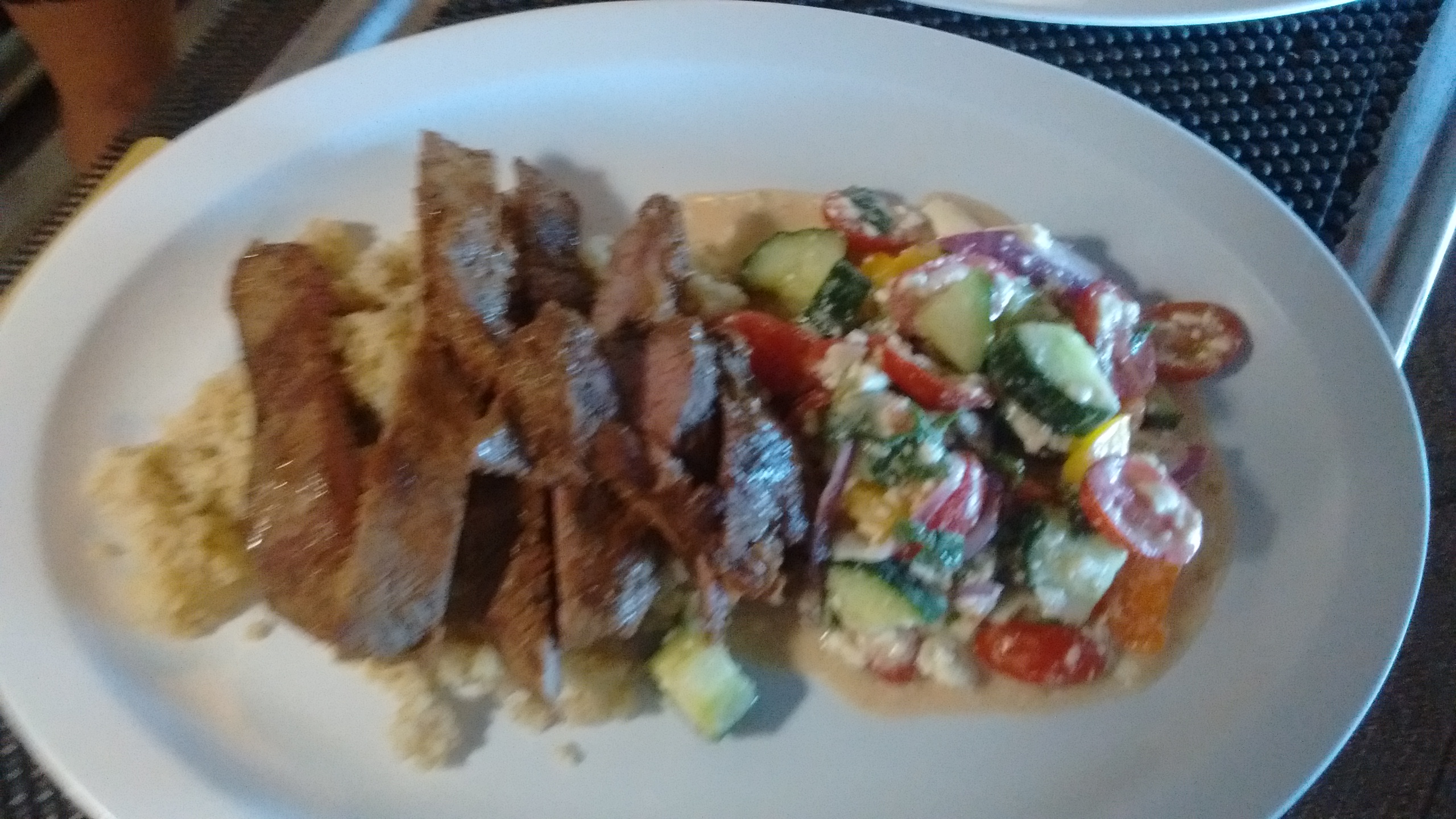 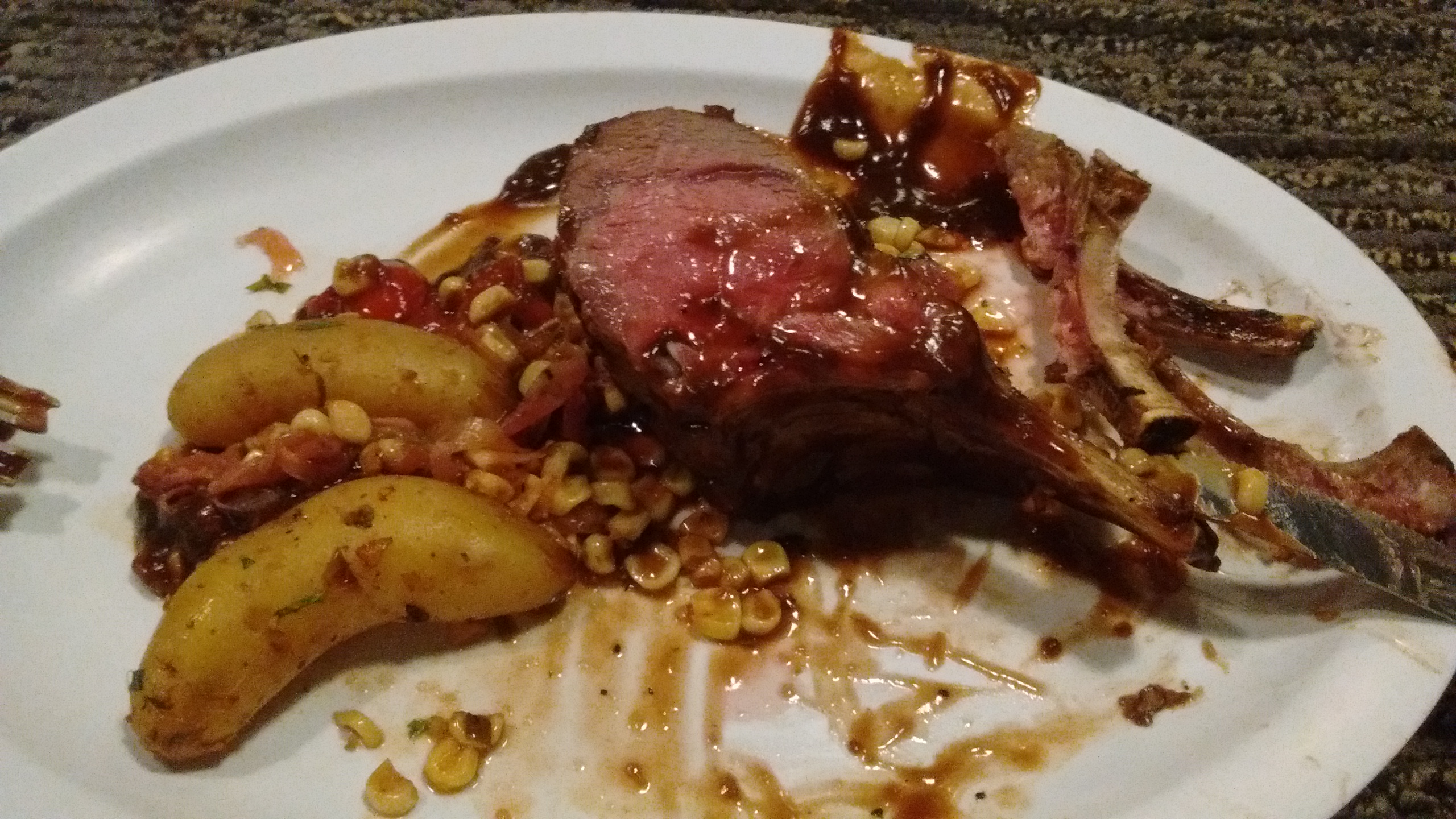 I love a report with use of old school gear. Thanks Alan.
Reactions: Tunahead and One_Leg
Upvote 0

Wai, your trip sounds like my 8 day trip back in June except we made it out for BFT. The weather was bad out by the Tanner this week!
Toggle signature
When I was your age, Pluto was a planet.
Reactions: Tunahead
Upvote 0
A

hucklongfin said:
Wai, your trip sounds like my 8 day trip back in June except we made it out for BFT. The weather was bad out by the Tanner this week!
Click to expand...

Sorry to hear about that. Alan, Georgia Mike, and Warren will be on the Grady White SOA 10-day going out 10/23. Hope it turns out better than this 8-day.
Last edited: Oct 13, 2021
Reactions: Tunahead
Upvote 0

Great report/info/pics Wai.
About Those food pics.
Made my A1C quiver!

Glad you made the most
of several fishing conditions.
That wind and swell at the
Tanner was gnarly a few days.
Upvote 0

Thanks for the high quality write up & the Pix.