Fished the Ridge for four days with first two days outbound travel and last two days inbound with the latter having stops en-route based on making good time against winds and currents. At the Ridge, we were in the company of the American Angler, Independence (my bad, it was the INTREPID), Royal Polaris, and Vagabond at various times.

What worked best for me:
What was rarely utilized: 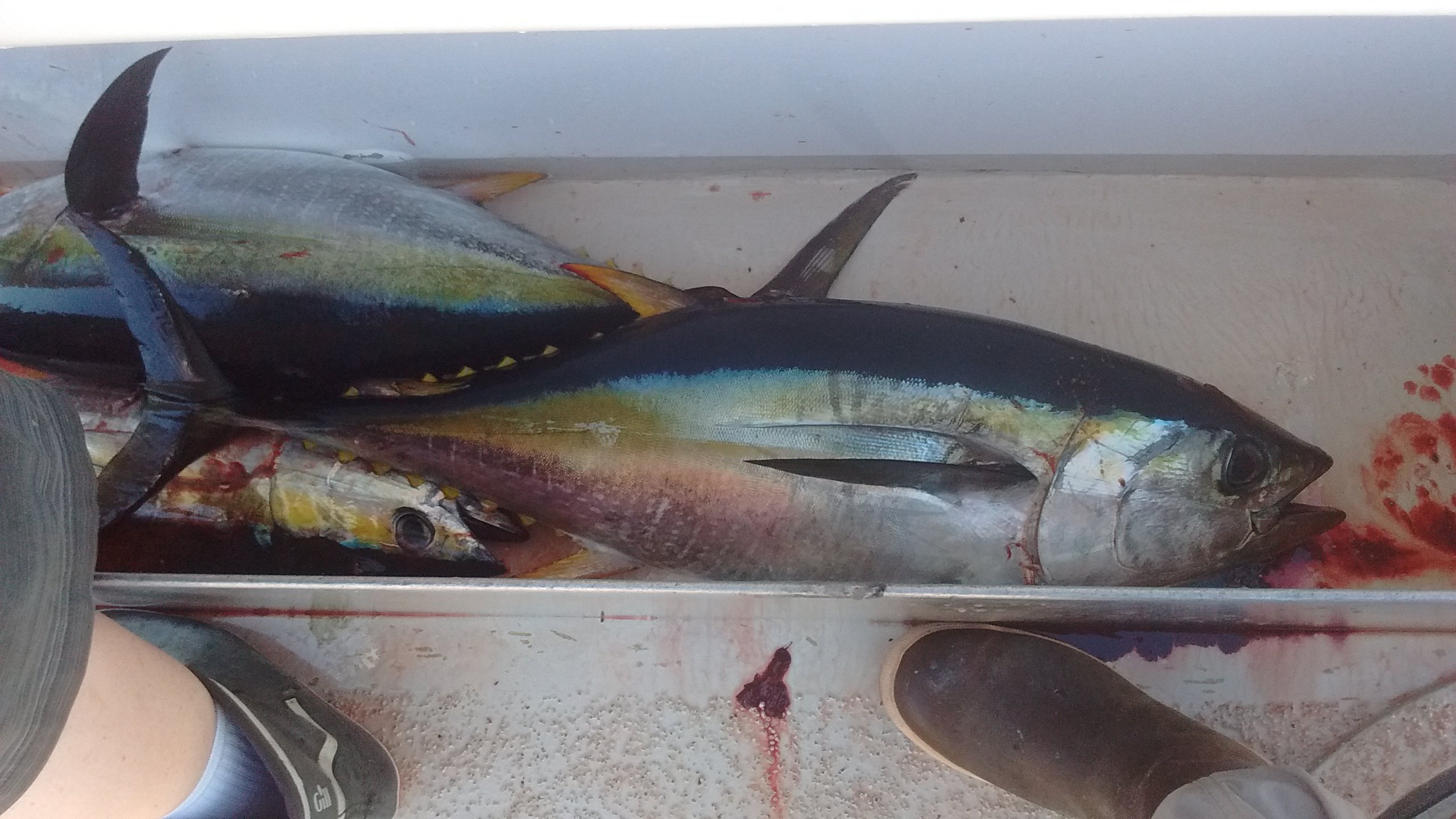 That's my Size 10 Xtratuf in the lower right for comparison...

Actually fishing time:
Day 3
Stopped on 1 paddy for 1 dodo on the boat, and started trolling for the rest of the way to the 13. Picked up 7 wahoo on the troll for the boat. Was an off day, and I didn't put any fish on the boat. It was like Charlie Brown's "I got a rock." People around me got wahoo, YFT, smaller grade YT (rats were CR'd unless someone want to chunk or fish for grouper), but all I had skipjacks and rats all afternoon and into the evening. Nothing on night time vertical jigging or flat falls.

Day 4
Finally started boating YFT and smaller YT (sizes bigger than rats but at most 20 lbs) on both conventionals and spinners. Even hooked up to trigger fish which were CR'd. Personally no wahoo on the troll or on chunk. Nothing during the day with any vertical jigging or yoyo-ing. Decided it was too windy and rolly-poly for night fishing so call it a day after dinner.

Day 5
Some more YFT and YT, but still no wahoo or dodo. Called a day when the sun went down and it was no longer possible to see white or hi-vis yellow spectra and tangles became nonstop at the stern.

Day 6
Again, no wahoo for me on the troll or casting. YFT and Dodos.

Day 7
Stopped at multiple spots on our way North trying for YT. First one was landed at the third stop. It was here that I finally succeeded with a DIY-configured jig--like the one at the top but in black pattern: 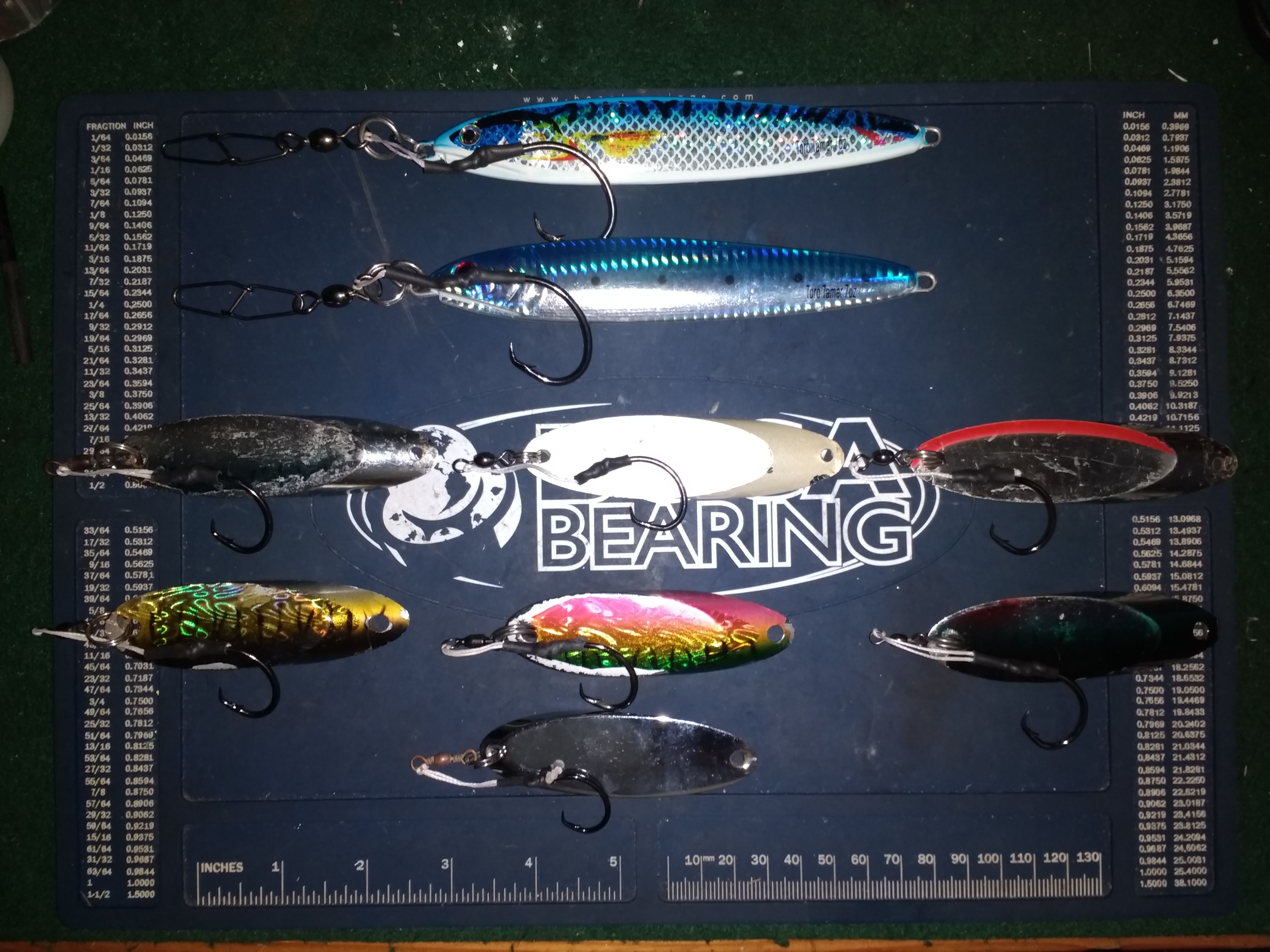 The lure and the hooks were the same but the hooks were redone with 250lb kevlar cord. On the descend, it hooked up to just a large Bonito (which was CR'd) but was solidly hooked in corner of the mouth; felt had something "funny" and decided to start retrieving about 5 sec afterwards.

Continued North looking at "rockfish" spots. Succeed mid-afternoon and got reds and lings.

Will end here since Alan Tani himself will most likely post a much more detailed report.
Last edited: Oct 23, 2019
Reactions: Pangamaster, r46chevy, joel8080 and 11 others

Classic, my Indy report I just posted noted "Sometimes catching an off day simply makes you appreciate the good days, but when you string together three in a row, an EBay tackle sale and a new hobby comes to mind" I can feel your pain!
Reactions: Pangamaster
Show hidden low quality content
You must log in or register to reply here.
Share:
Facebook Twitter Reddit Pinterest Tumblr WhatsApp Email Link