First report is from South Bay. Took my youngest son and his friend fishing in South Bay. I was heading to a spot to fish when I noticed some slicks and decided to throw our lines out. Kids ended up catching a few small trout with one keeper in the bunch. My son's friend caught his first red 16". The funny thing was, it didn't have a single spot on it. That was a first for me. Anyways, at our first spot they ended up catching several rat reds, got rain poured on them for about 10 mins, and we finally moved when the hardheads came out in full force.

At the second stop in South Bay we found some larger Reds. Not huge, but lower slot reds mixed in with a bunch of rats. It was constant action for a while. As usual, I try not to fish when I'm with my younger kids. I use to do it but it would get a little stressful trying to fish and tend to them. After several years, and a lot of patience, I have learned it is better to just focus my attention on them and let them fish.

I was casting to 2 different points on the second spot. I point to them in the video. I know the fish weren't huge but if you got kids and just want to put them on fish that wasn't a bad spot. Just careful with the patches of oysters.
Here is a Link to the video. Hope you all enjoy.


The Second Report is from Keller Bay

We fished out there 3 consecutive days. The first day it was 5 of us. (My Dad, myself, my oldest son and two of his friends that had never fished before. We went out for couple of hours. My Dad caught a 30 3/4" Bull red. A few minutes later he hooked up a 3 1/2- 4 ft Gar. My oldest son asked if he could reel him in and my Dad handed him the rod. After a few minutes he lost the fish. He was disappointed but his friends got a kick out of it.

Day 2
We split up on 2 different boats. On my Dad's boat he was the only one that caught anything. A 21" red. On our boat my little girl had her best day fishing, according to her. Her first fish was her personal best, a 26 3/4" red. Followed by my wife catching a 24" red. Then my daughter caught another 26" red. Finally, her last fish was a 19" black drum. She is still looking for her first "Oversized" red. Unfortunately, as I was lifting the stringer at the end of the day the largest red of the day hit the lip of the deck, the hook opened up, and off he went.

Day 3
My Dad ended up at the spot we had been the day before, while we trying to catch mullet. I had told him to mark the spot because my Gps was not giving me the right location. Anyways, they ended up with 9 reds ( 4 rats, 4 slot, 1 bull) and 3 black drums ( 1 keeper). We were less than 50 yards South of them and nothing. We then moved a few yards North of them and my little girl managed to catch a 24" red with a hardhead on the other hook. Both my youngest son and daughter did catch one rat red each.

The spot we fished on our 2nd day and my Dad on the 3rd day, I decided to try it because when I was casting for mullet I pulled up several tiny shrimp in that area. They were to small to use for bait, but I figured there might be some fish feeding on them. Turned out to be a good little spot.
Here is a link of the video to this trip. Hope you enjoy and God Bless. 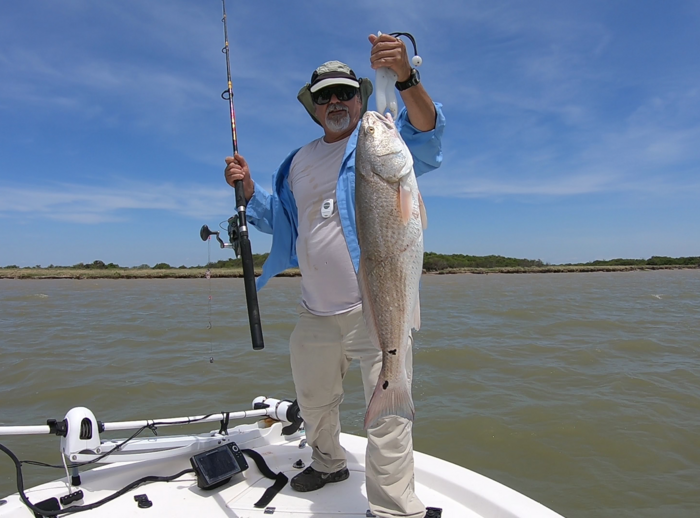 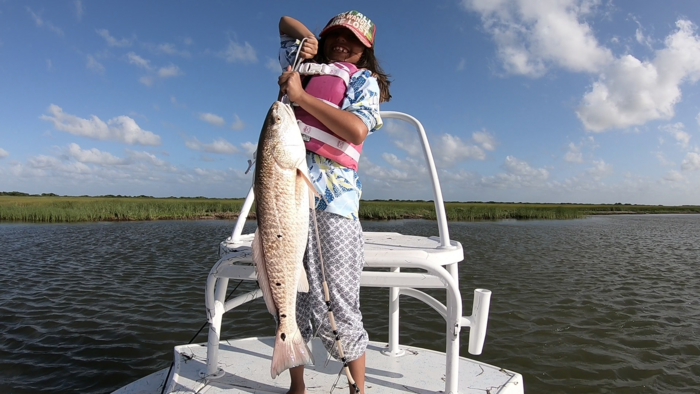 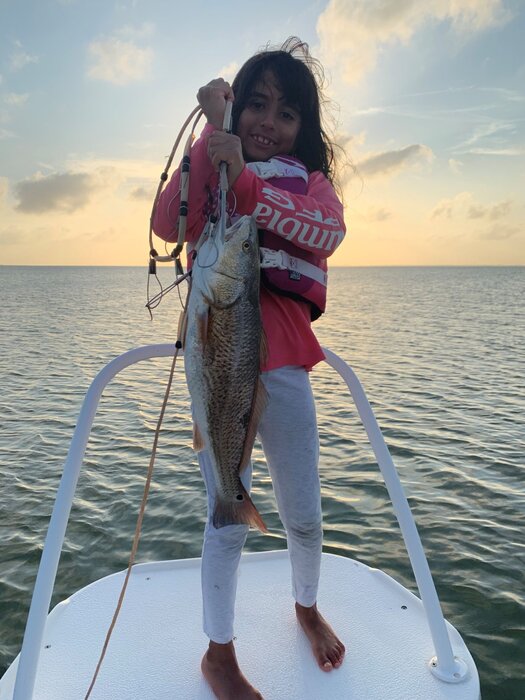 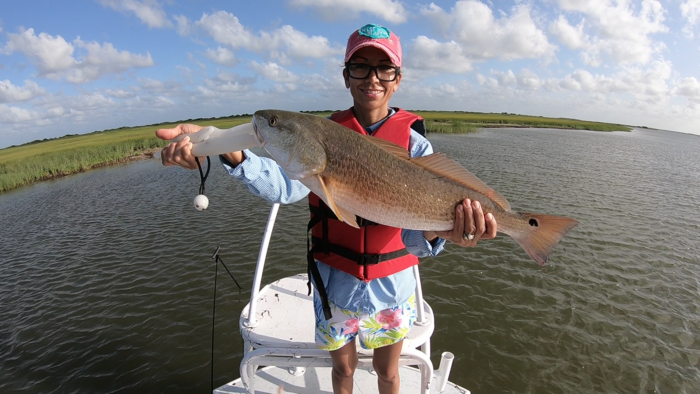 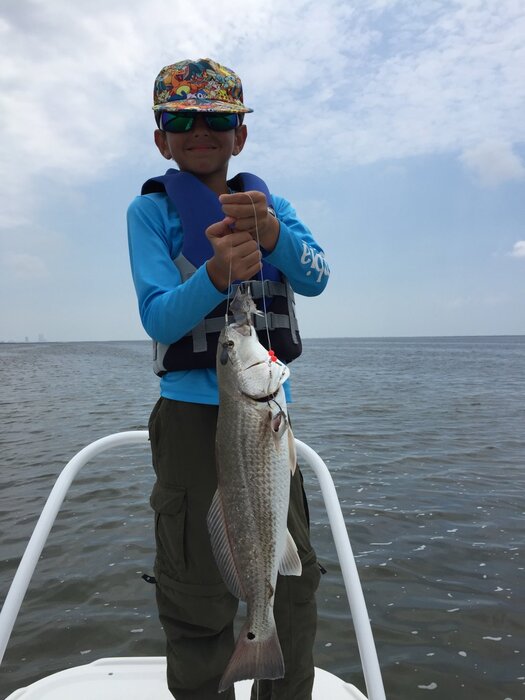 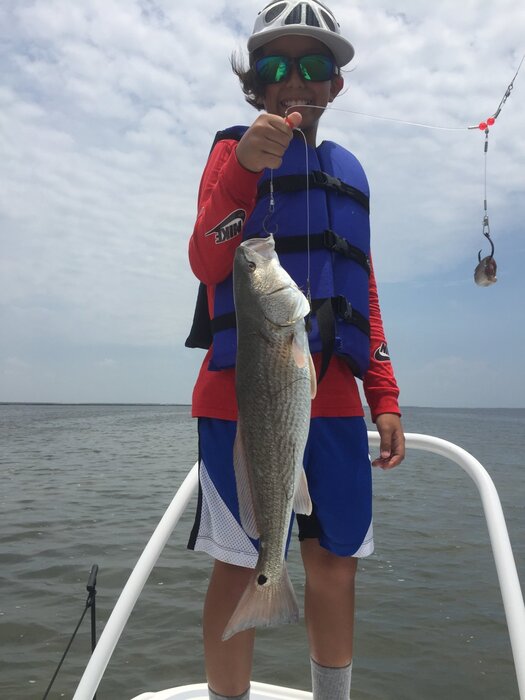 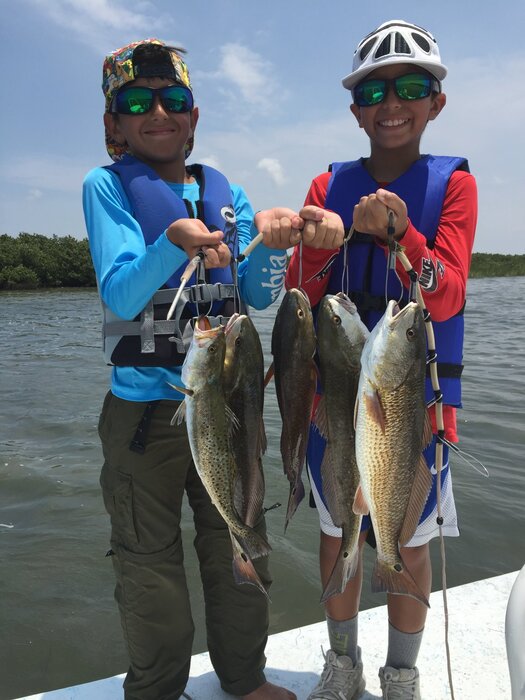