Shot out on my buddy's Whaler from MDR. Made macs out front of the harbor. Shot to west end of Cat to try for some yellows for a few for nada. Continued to west end of Clemente. Some big paddies holding bait in between, but no one else home.

Set up 6 miles south of Cove Point. Put out kite and flier and chunked half a 5 gallon bucket of sardines. Got two schoolie size BFT 15-20lb on fly lined macs on 40lb. Metering fish at 100, set up a couple sinker rigs on 30lb/trout size hooks for no love. Called it a night.

11/4 we fished that spot down to 381, 81, and Desperation. Flying yummy, flying fish, you name it for nothing. Set back up at 381 and almost called it around three to head for the barn. Saw a foamer of beautiful 50-100lb fish. Always surreal seeing them airborne. Got on them throwing macs right on their dumb heads. Light line, heavy line, small macs, big macs, colt snipers, wouldn't go. It sunk out. Stayed in the zone for awhile and got hooked up on a mean 40-50lb fish on 40lb fly lined mac. While my buddy is fighting that, kite with G-Fly goes off and all hell breaks loose. Fish ended up foul hooked in it's chest/lower jaw area, which proved problematic. I couldn't get his head to turn. Fishing 130 JBHC, 400lb leader, Tiagra 50W, what felt like a million pounds of drag. Usually, this is over within 60 minutes. 2.5-3 hours later, 6 trips around the boat, finally gotta couple gaffs in it, tail roped, and knife to the gills. It was still pissed and causing a total scene. Wasn't until I stuck one of @matt86m tuna spikes in it's head did it settle down (Thanks Matt, epic spike).

Super lucky year for me, going from never catching a cow to 4 cows and 1 super cow, plus the smaller bonus grade fish. Tons of skunk trips in between. I used some paracord to tape it out, but left it in my tacklebox, so I'll update later. After 2.5 hours of sleep, it was the last thing on my mind this morning. The pictures don't do this thick MF'er justice. The guy with the Pelagic shirt weighs 240. 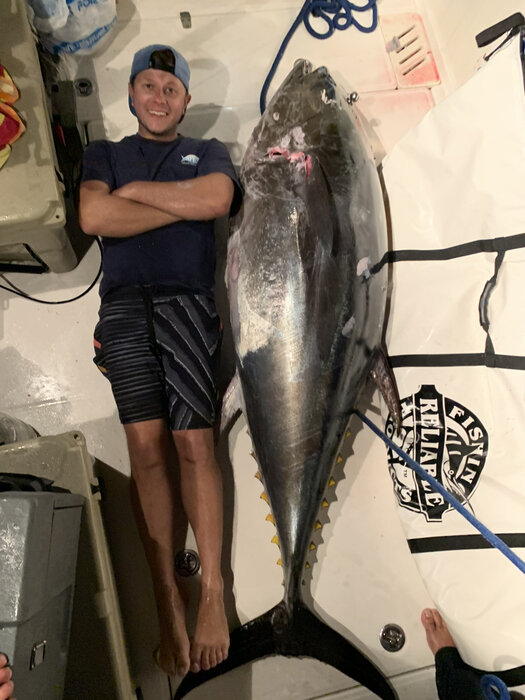 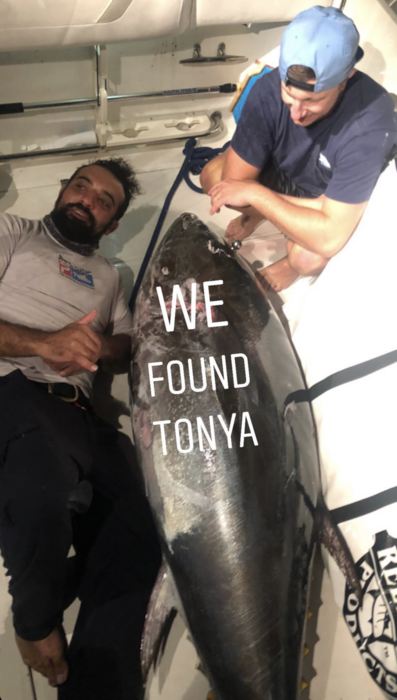 Not worthy of a Title

Thanks for shout.
Toggle signature
You're 1 beer away from being my type
Reactions: 72fishn and C.Bergs
Upvote 0

That's awesome. Thanks for the report.
Reactions: C.Bergs
Upvote 0

Tonya get on ya! Damn good!!!
Reactions: Matty Be~all and C.Bergs
Upvote 0

What a Brute.
Reactions: C.Bergs
Upvote 0

Nice work Cory, glad you stuck it out and we’re able to convert! You are a cow whisperer now!
Reactions: C.Bergs
Upvote 0
P

Heck yeah boys way to get it done !! Headed out tomorrow hope we get some love as well !! Beautiful fish congratulations!!
Reactions: C.Bergs
Upvote 0

Got 4 G flyers in my freezer. Think thats why I just got invited on a 3 day? Or cuz im cool?
.
Reactions: C.Bergs and AndyJ
Upvote 0

Nah. It was the flyers

Great report king Bergs. Congrats on another great trip! So what are the final measurements ?
Reactions: C.Bergs
Upvote 0

Hector Romo said:
Great report king Bergs. Congrats on another great trip! So what are the final measurements ?
Click to expand...

Still haven't gotten to the paracord in my tackle box. Dropped it in my parents' garage and haven't been by. You'll be the first to know, Hector!
Upvote 0
Show hidden low quality content
You must log in or register to reply here.

Offshore My first bft and it was over 300lbs!