Departed Friday 11/26 Sunset Aquatic at 8am – picked up a scoop of Dines from Nacho – Headed over to YT point and the first drop on a sinker rig with two sardines and got 2 small (1pound) bones. Headed towards Avalon, made a couple stops at the usual places, and was only rewarded with sand dabs at Hen Rock. Stopped over at the Rock Quarry and picked up two Goats on frozen squid. Also got a couple whities, one legal. Made it in time for cocktail hour at the Marlin bar, slept like a champ on the can. Next day, went around the east end, stopped at the rock fish spots and didn’t get anything. Did not mark any fish from Church to Salta Verde – Kept looking from Ben Weston to Iron Bound / marked some fish at Iron bound lower, didn’t get any bites. The kelp off West Cove was biting – picked up a 5-pound bone on frozen squid dropper loop. Went around to Johnson’s rock and marked a ton of bait and fish in 60-80 feet of water just outside the kelp. Slow steady pick of whities, dabs – even got two baby lings, snagged a baby octopus. Threw it all back. Stayed at the Isthmus, grabbed drinks at Doug’s Reef – highly recommend the “paint killer”. Sunday morning, there was a ton of fog, fished back up to the West end – The fog cleared by Johnson’s rock and saw tons of bait. Headed home in the fog, thankful to have radar. We didn’t catch any fish fly lining bait, or fishing plastics. All bites were on sinker rig sardine, and dropper loop frozen squid. Every time we dropper looped with a Sardine and Squid, the squid got bit – Weather was excellent – fishing was slow 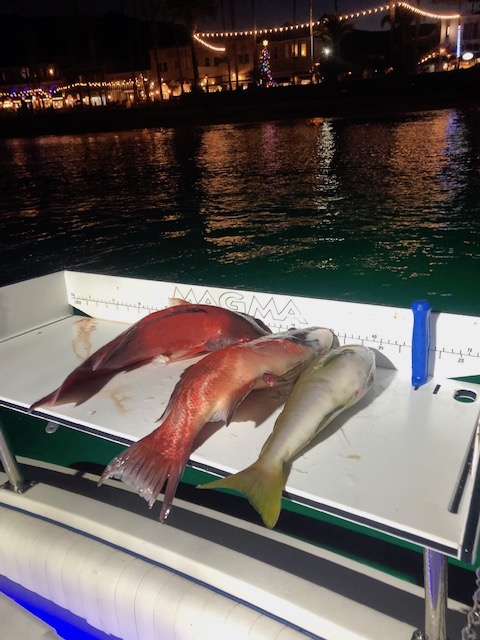 Great report/info/pic. Well rounded trip.
You sure covered the grid at cat for sure.
Some tasty fish and fun times.
Upvote 0

Jealous. I should have done what you did this weekend! Thanks for reporting.
I’m hearing about lots of squid at the island. This should make for a great winter/spring over there.
Upvote 0
H

Nice report, thanks for the island run down!
Upvote 0

Great report. I can assure you that you were having a better time than me rummaging through Christmas deco boxes...
Toggle signature
There's something fishy about this website...
Upvote 1
J

Great report sir appreciate it, will hopefully be able to head over in the next few days. Would like to make it a relaxing Swordie, fishing, lobster trip !!
Reactions: pacificscout
Upvote 0

A few fish tacos for dinner, right on!
Toggle signature
Thanks for your report. Hook up! Cory
Upvote 0
Show hidden low quality content