Long version: Got to the Cabrillo Marina around 12:30 PM yesterday along with my 79 y/o Dad. We were looking to get out for a few hours with no specific time to be home, as the wife had a work function that night. We debated a quick trip up to Rocky Point or (weather permitting) a "quick" run down to the tuna grounds

. Here's what weighed in to our decision: The wife and I went south last Saturday 10/22 in Beautiful conditions. We traveled from San Pedro down to the 14 to the 277 towards the 209, over to the 267 and back to the 14. Spent the whole day looking and even got into a great drift with about 12 boats, only to watch beautiful, BIG Yellowfin BLOW up around us and we never had a hook up

. Dad and I decide to let the bait make our final decision. Well, San Pedro Bait had some beautiful cured 4-6 in sardines and we picked up 1 1/2 scoops (should of picked up 2). Exited the harbor to excellent, almost flat calm conditions with almost no breeze and the NOAA said 2-3 with a chance of rain in the evening...

Decision: Point the nose for the 14 and off we went!

The Shamrock 246 was recently re-powered with a Mercuiser 383 and finally got things dialed in. Cruised at 27-29 MPH and arrived at the 14 in under an hour. Water temp was 65.6 and blue. Looked around and found a few small paddys with nobody home so off towards the 277. Water temp began to warm to just under 67 and turned a deeper blue. Just short of the 277 and a few miles inland, we could see a group of around 6 boats drifting. Being that it was now around 2:30 or so, it was a good sign. Approached the armada slowly and at a respectable distance, noticed that half the boats were hanging and a few doubles were going.

Decided to change up things after our tuna skunk last week and the plan of attack was: CHUM CHUM CHUM. 15 lb floro and my good ol fashion Newell 220, knowing I would be in trouble if I hook in to anything of size. Began to drift with the group and I immediately threw a net of chum followed by 1's and 2's. Before every cast, I threw 2 baits in the general area. Sure enough, the Tuna started to churn the water and some were Big! My Dad calls them little Volkswagens, like the beetle or bug. Then a few started to jump and these beautiful fish began to get with it. After around 20 minutes, I had a chum blow up right off the Starboard corner and I landed a slimy sardine right on top of it...Bait was instantly inhaled and after 1, 2, 3, 4, 5...Set the hook and FRESH ONE!!!

The tuna made a solid run and peeled off at least 75 straight yards. With only 15 lb test and a borderline bass rod, I was going to have my work cut out and sure enough I did

Ended up hooking up my only Newell in need of new drags and sure enough..the familiar sound of a sticky drag and light line required me to back the drags off quite a bit. Basically, the fish had me up and down FOREVER and once he surfaced, he made a straight line out to sea and surfaced a few times about 100 yards away from the boat.

. After the 4th time she sounded on the surface around 75 yards out...we fired up the engine and slowly backed her down....remember the 15 lb and sticky drags??

Finally at DEEP color and for the life of me, I couldn't get her head to turn

. The fish looked pretty big (not Huge) but just big enough to cause some grief. Over 1 HOUR into this deal and finally into the death circle. I'm short cranking as best as I can and after 4-5 nice nice circles Dad sinks the gaff in her and with one shot...Blood on the Deck!

1st Tuna on the Shamrock and PB best at 29lbs on the digital. 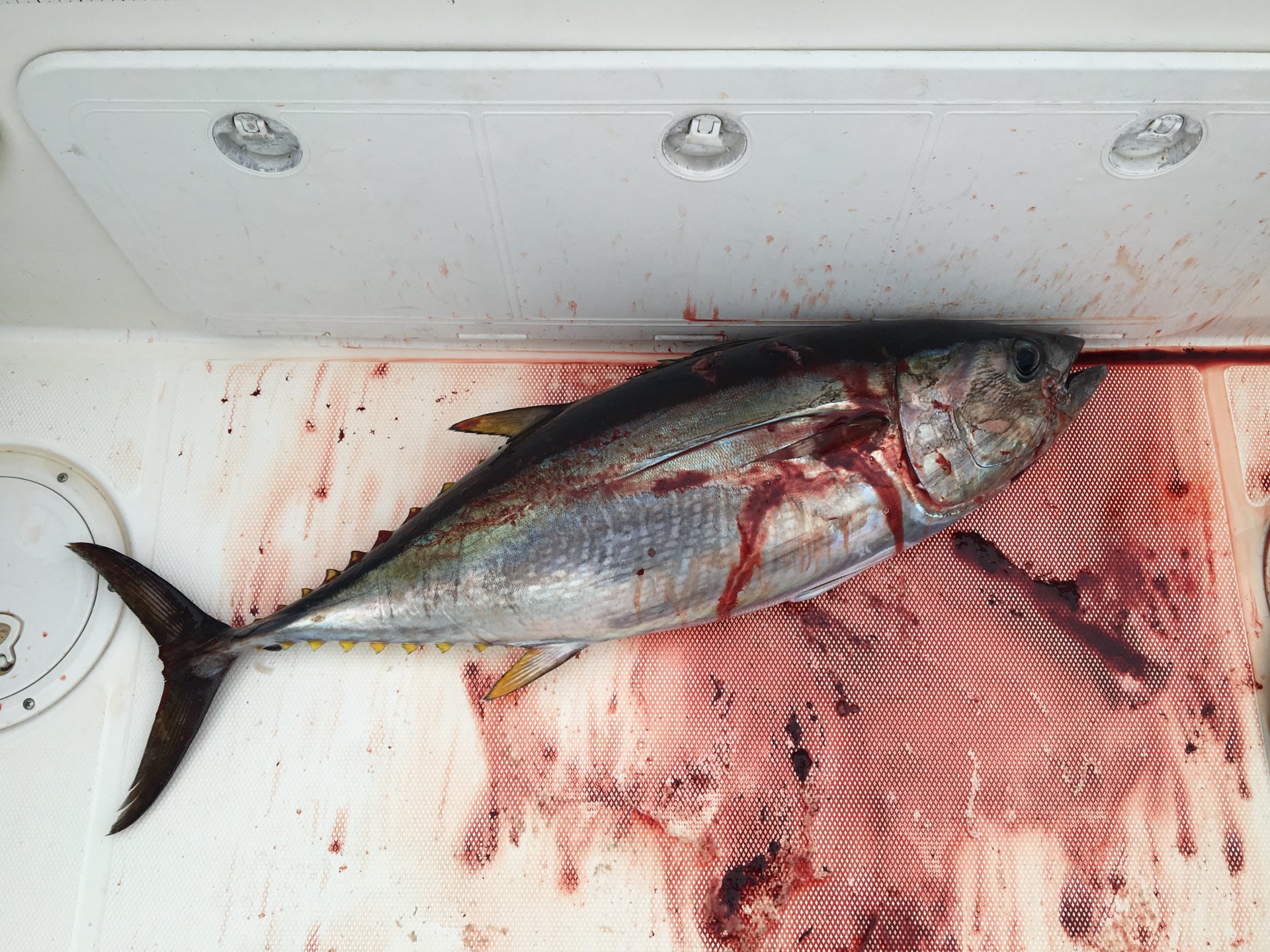 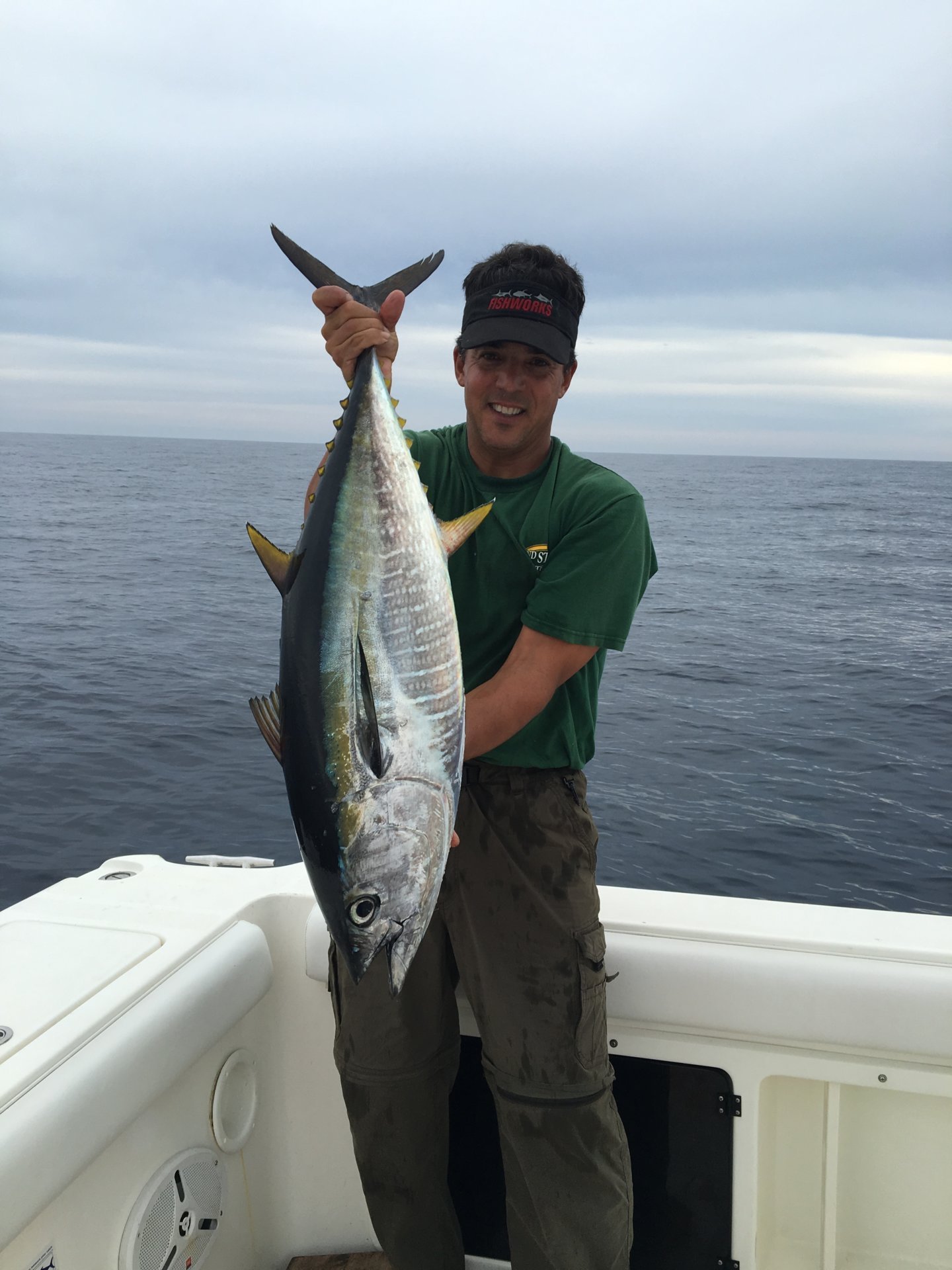 It's now about 4:30PM and all the boats drifting with us are gone! Still wanted to get my Dad hooked up and the area was super fishy, weather was beautiful and we decide to keep rolling.

Not more than a mile away we found a HUGE pod of dolphin.. We got a head of them and shut down. With only about 1/4 of our bait left, this was our last shot and not to mention we were 42 miles from Pedro.

Unloaded a good amount of chum and sure enough, the Volkswagens showed up and started to boil. 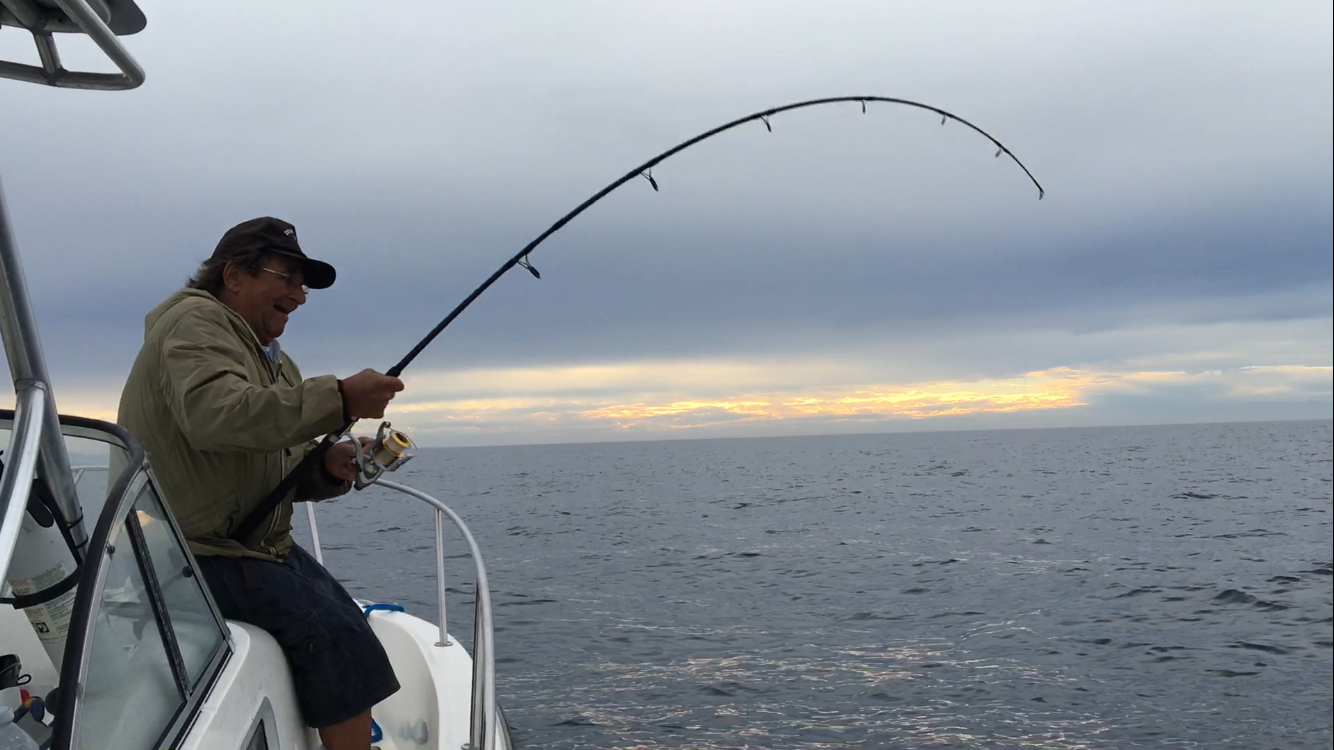 Dad, Unlike his Son, puts the wood to the fish and 20 minutes later...19 lbs and Dad's PB hits the deck. 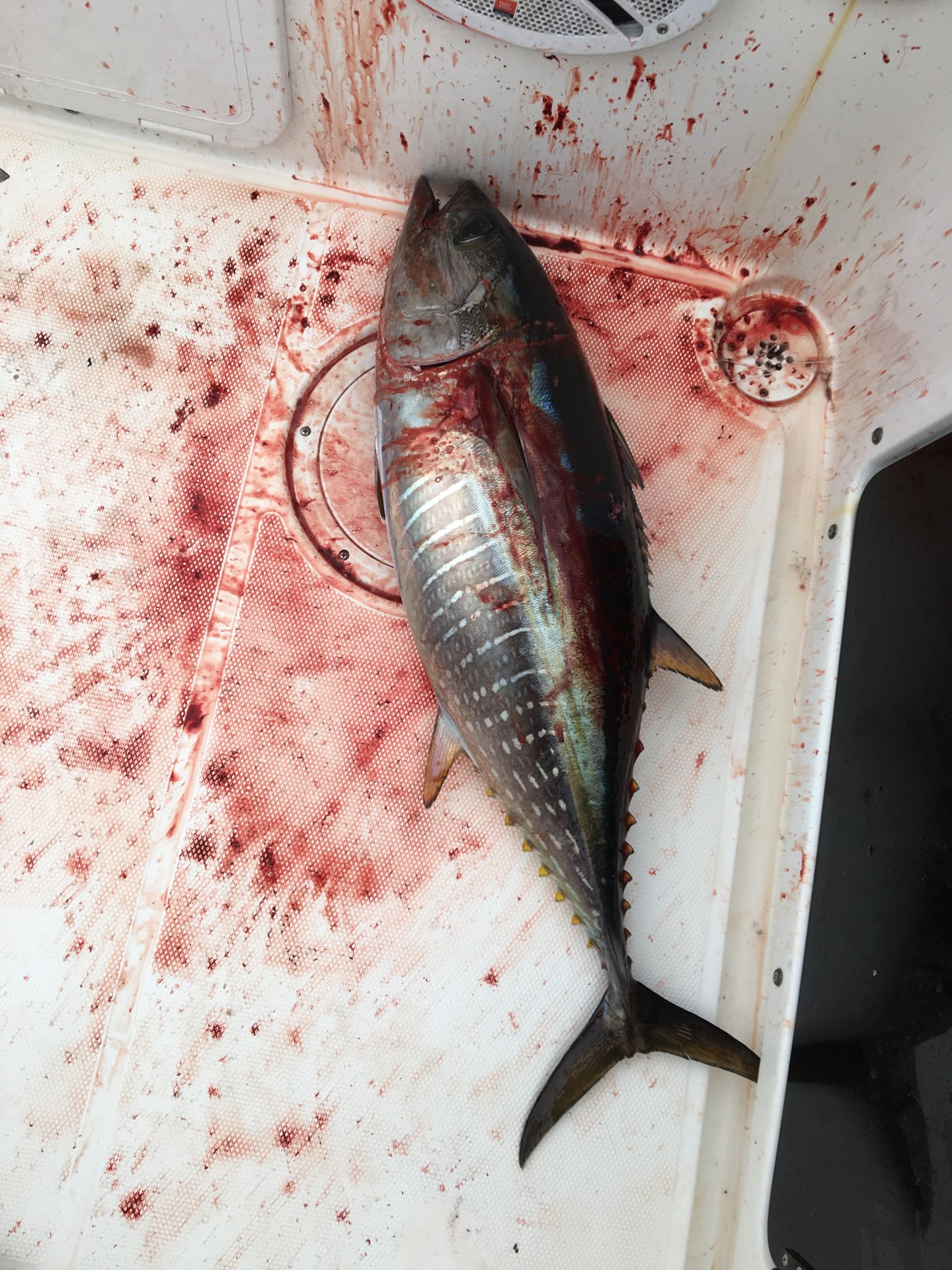 High Fives and Smile all Around! 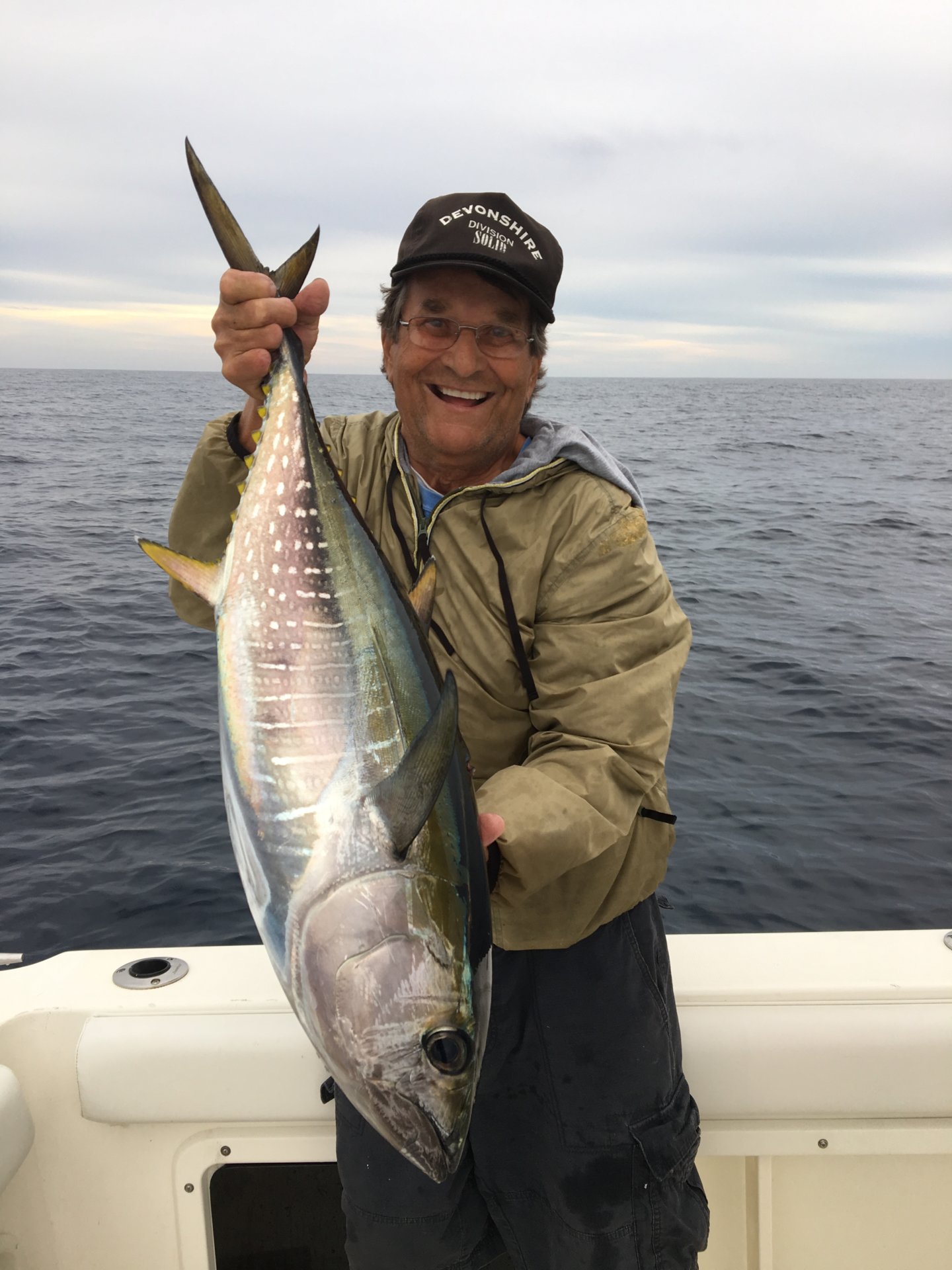 It's now almost 6PM and we've got 42 miles uphill to get home.

32 mph for 2/3 of the way home until it starts getting dark and we approach the outside rigs. Radar on and mother nature woke up! Our flat conditions turned into a stiff side wind and 3-5 swell hitting us hard off the port bow. Slow and steady and we make it to the light house a 8PM

. Mission accomplished and many firsts for us 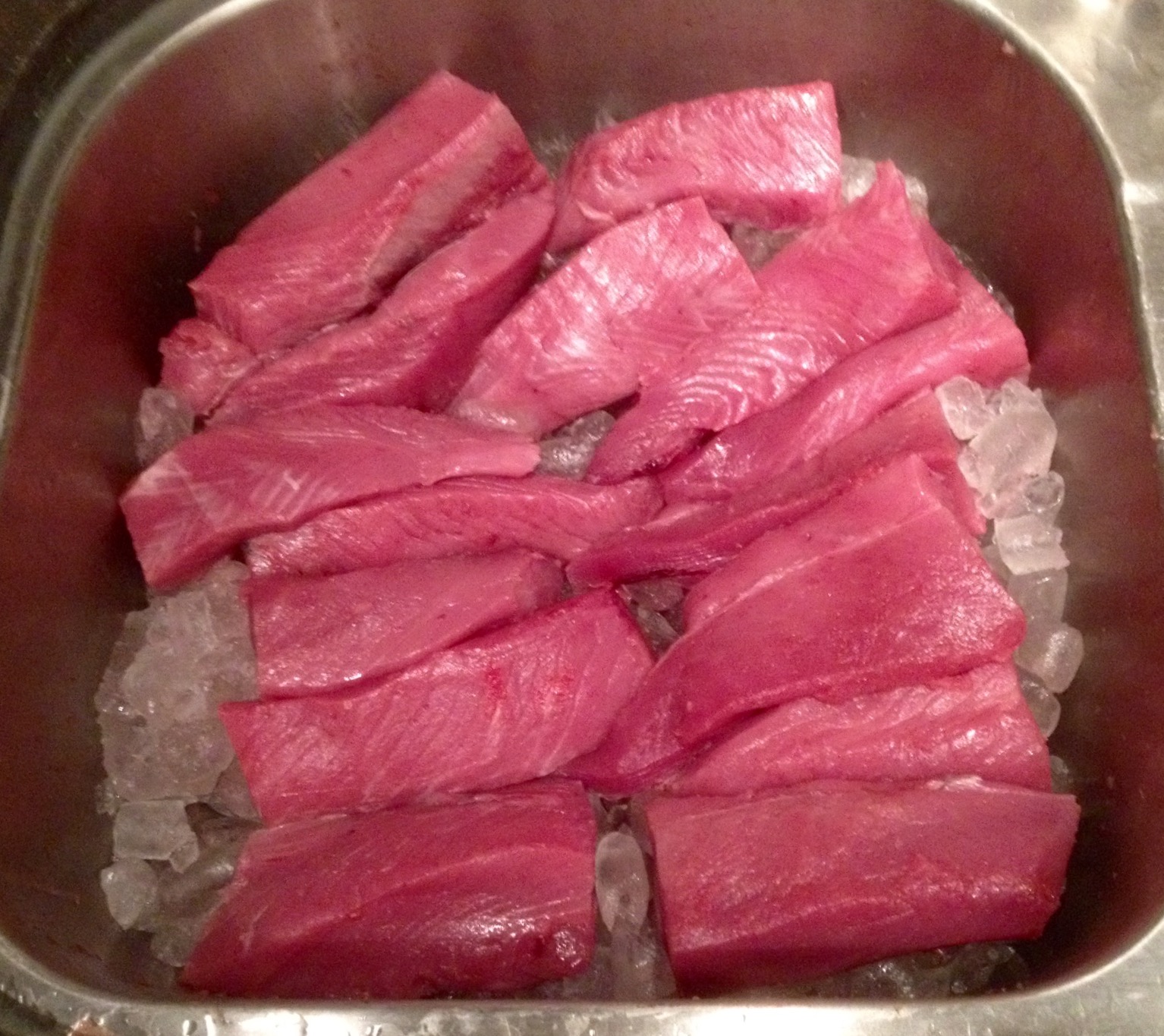 More importantly: Be safe out there...

Tight lines and go get em.

Yaaaa Buddy !!!! These tuna are beast mode.. Your not the only one that got your butt whooped by a 30lber...

Way to stick with it and get Dad hooked up.
Toggle signature
Reactions: Donkey Nick
Upvote 0

Just a tip.. Don't let the fillets touch fresh water, including ice until you prepare it to eat. The fresh water breaks down the meat and causes freezer burn almost instantly.

You weren't kidding about the huge dolphin school. Our airplane for Fishdope found them with no one around and I said the same thing when I saw the pics. HUGE pod! 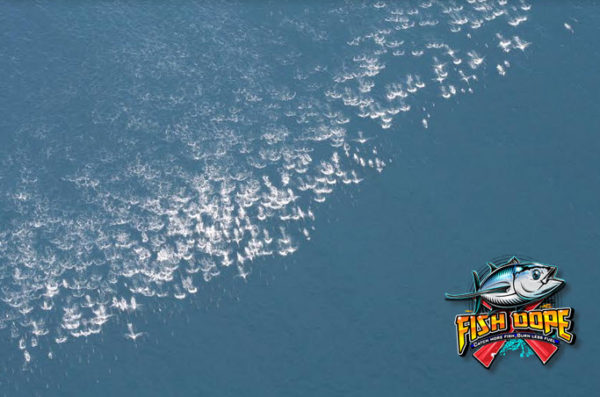 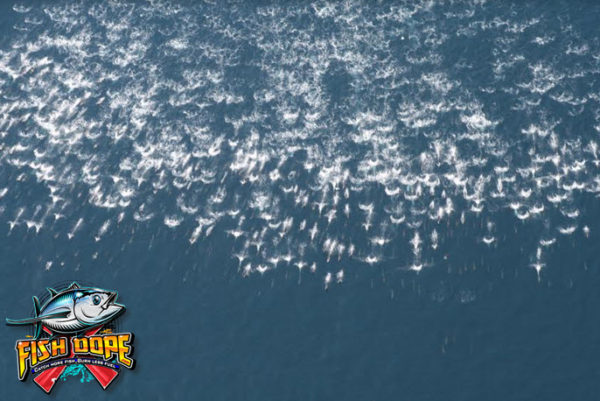 Reactions: FloMar and Donkey Nick
Upvote 0
Show hidden low quality content
You must log in or register to reply here.