Got the call from @Benny Mora and decided to make a run offshore to fish half-day on Sunday to see if we could enjoy some of the Skipjack action that has been reported lately. Got ahold of Glenn @Hismosa and he was up for the run too. Met up at Benny’s house in Corona at 3am and we were off to San Diego (Mission Bay). Got to Dana Landing in good time (5am), launched without any hiccups and were off to get bait. Picked up a nice scoop of mid-sized dines and had a couple of passes put into the bucket because Benny’s bait tank holds a little more than a half scoop pretty well. We covered the dying deans with a layer of ice to keep them fresh then hit the mouth of the harbor to make some macks.

Glenn was the stud on the sabiki Sunday, dropping macks in the bait tank one after another. I was getting skunked on the one part of the fishing trip that I usually go WFO. After it was all said and done with the macks, Glenn dropped about 15 in and I dropped 1 in. Glenn brought up the last time that we fished when I was catching the macks and he was not…later that day he was the jackpot winner on the skiff when a HUGE Dorado hit the deck. We dumped out the cat food from the chum bucket and pointed the bow towards the 9 mile bank. The conditions were pretty nice, minor wind and small swell with long periods.

We get out to the 9 pretty fast and find an area with enough sporadic bird action to think that it was a good time and place to put out the trollers. We dropped in a purple and black cedar plug and a deep diver Halco and started making out way SW. There was a lot of radio chatter confirming that the Skipjack were there and in big numbers, but you know how it is when catching Skipjack…They are fun for a little while but once you catch a handful, your mind starts shifting to the hopes of catching YFT. One guy was decent enough to give out some numbers saying that there were Yellowfin under the Skipjack, but you had to be patient and chum the heck out of them to get them to come up. We trolled for about 10 minutes before the first troller started singing. Woo Hoo, Game on!!

We grab the bait net and start chumming live baits being selective to pull the dines off the bottom of the tank because those seem to die faster than the dines on top. We went wide open on the Skipjack catching a handful on bait and I was having a great time. My arm was even starting to get a bit tired, I love when that happens. We kept chumming a solid and generous line of live baits and at the same time dropping chunks of the bucket dines about 2 dines chunked every minute. As I said above, it didn’t take long before we were started saying…”Dang it!! Another Skipjack” (we used a few select words in place of Dang it!!). I laugh at how expectations change because before the blind strike on the troll, I just wanted to catch Skipjack. Now that we had a few on deck, I was sick of this fish…lol.

I decided to pick up my old glass Sabre with a Lexa 400 and a blue and yellow colt sniper to see if I could get below the Skipjack and after catching a few more Skipjack, I get hit after letting it sink for about 45 seconds and this one is bigger. It is taking line even with a solid drag set and I am feeling the headshakes. I knew this had to be the right kind, but didn’t want to jinx it by saying it out loud until I actually saw yellow in place of the blue backs of the Skipjack. I get it to color and when I say color, I mean yellow…Hell yeah!! Although we have caught Yellowfin on the troll in the past, I have never caught a Yellowfin that I could say was my very own, so this was a moment I was going to remember for a long-time… gaff or no gaff. We commence to join the circus while I was trying to lay out the Yellow for the gaff shot, but he wasn’t ready to be gaffed and at the same time, I was not going to let this guy take me for another run and possibly throw the jig. Benny did what he had to do to bring him over the rail and in no time I was holding my very first Yellowfin Tuna. What an amazing feeling… not to mention this was not the tiny guys that have been caught a lot lately. The fish was not the biggest by far, but it made me happy to have this memory with a fish that I could respect and show off the pics.

We fished in that spot a while longer, keeping about 6 or 7 Skipjack, releasing about 12, and losing another 12 or so (most were lost bouncing them and a few were broken off). The bite slowed down and more and more guys on the radio were sharing info about spots that had Yellowfin biting more consistently but they were running out of bait. Although we were in a good bite, we thought that we had a better chance catching the yellow kind if we picked up and moved. Now, you know what they say about chasing radio fish… and this one is no different… in hind sight we should have stayed in that spot and chummed the heck out of those Yellowfin.

Well, we hit a few more spots, and picked up more Skipjack (almost all released) but never found another Yellowfin. At one point, we saw a pony jump about 6 feet out of the water 2 times back to back. When I saw it, it looked like the shape of a Wahoo, and I thought I saw vertical lines. On the second jump, I said “that ain’t no dolphin” because I thought I saw a bill on it. Oh Snap!!! Elvis is in the building. Benny and Glenn called BS, but both admitted that it was rare for a dolphin to be solo, and the way it was jumping was different. The truth is, it was a bit too far away to see perfectly, and it happened so quick none of could be 100% certain. But it was a big boy, for sure.

We kept it moving and found a small paddy at about noon and decided to blow our bait wad in an effort to go big or go home (literally). We chummed and chummed and chummed and chunked and chunked and chunked until we had only a few dines left. All that effort and we were only able to pick up another handful of Skipjack (released). Headed home at 12:30, with slightly more wind than at day break. About half way back, we made a couple of drifts on a small kelp paddy for a small, very small, ok, really really small Yellowtail (6 inches - released). Glenn said he caught it at the boat and it was barely bigger than the 4.5 inch colt sniper he was throwing. I’m just saying that we hit the trifecta…barley.

All in all, another great day on the water with a couple of good guys. Glenn was right in that I would be the one with the big stick that day because I couldn’t catch macks that morning. We bought more ice before leaving Dana Landing and packed those fish on ice. We got home in decent time, cleaned the boat, and filleted the fish so that we all got our fair portion. On the way home, I called my wife and told her to go to 99 Ranch and get the fixings for poke bowls. As we were eating the best tasting Ahi, Glenn sends us a pic of his homemade poke nachos.

For me… this is what it is all about. Get out there boys (and girls), the summer is over, but fishing for pelagics is not. Tight Lines!! 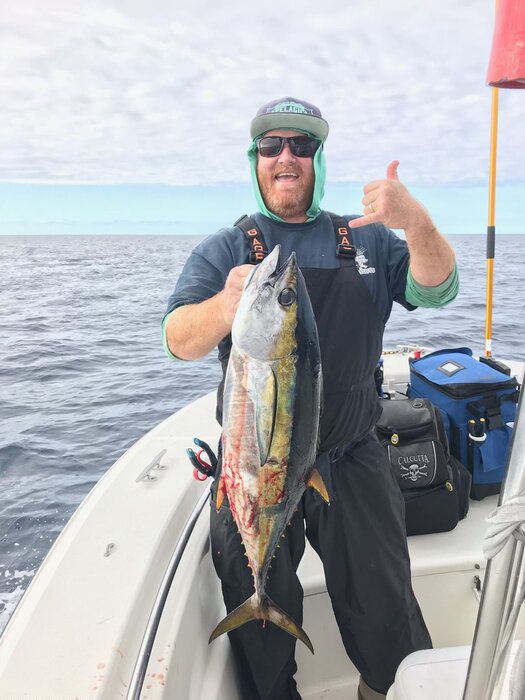 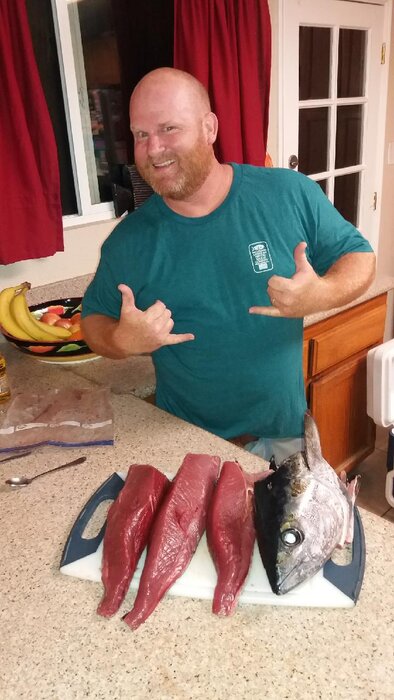 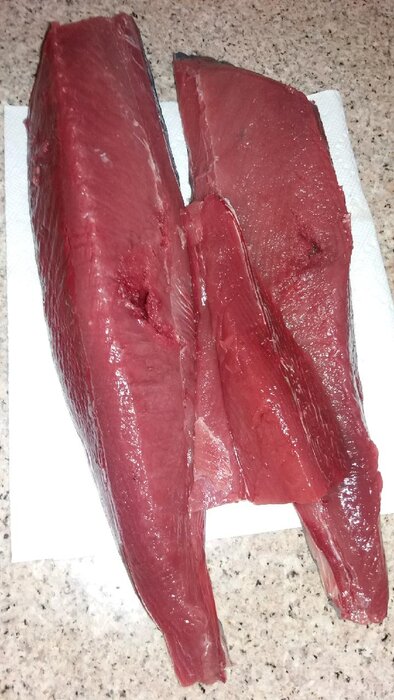 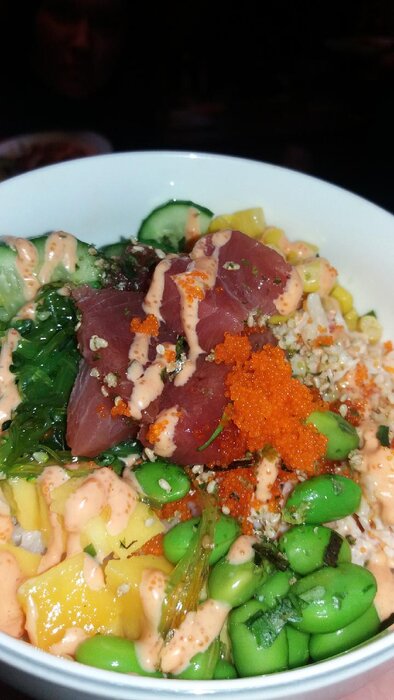 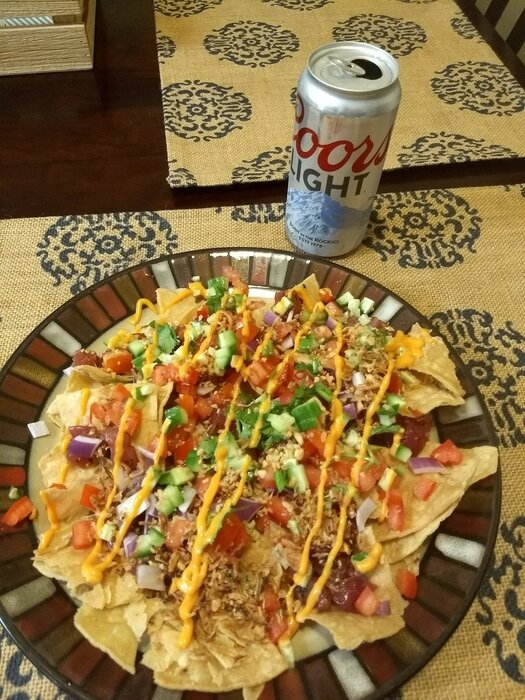 Congrats on your first very own yellowfin tuna!!! That is a very memorable day you will NOT forget!!! WTG Amigo!
Reactions: SaltH20Angler

Right on! The stoke is palpable
Reactions: SaltH20Angler

i have the same cutting board at home!

tresbien said:
Congrats on your first very own yellowfin tuna!!! That is a very memorable day you will NOT forget!!! WTG Amigo!
Click to expand...

In some weird way, I'm kinda glad it took me a while to get one because I tend remember the things that don't come easy. I've had my fair share of skunky days chasing tuna and it feels great to check a YFT off the list.

What?? No funny pic Marty?

Right now, I could go for the pic with the chipped tooth kid with matching fish...both smiling from ear to ear. Thats how happy I was to get one finally.

ssrmr2 said:
i have the same cutting board at home!

That lip on the cutting board holds just enough liquid to avoid dripping blood all over the counter before I can grab a paper towel.

I'd love to take credit for that plate of poke nachos, but that recipe is all Glenn's. I'm sure he'll tell you the recipe if you PM him @Hismosa. It does look delicious though.

Hell Cody, It was your recent report that helped in some ways put together the plan. Thanks for your report man.

ssrmr2 said:
i have the same cutting board at home!

Tried to somewhat copy the yardhouse poke nachos but didn't have all the ingredients on hand. 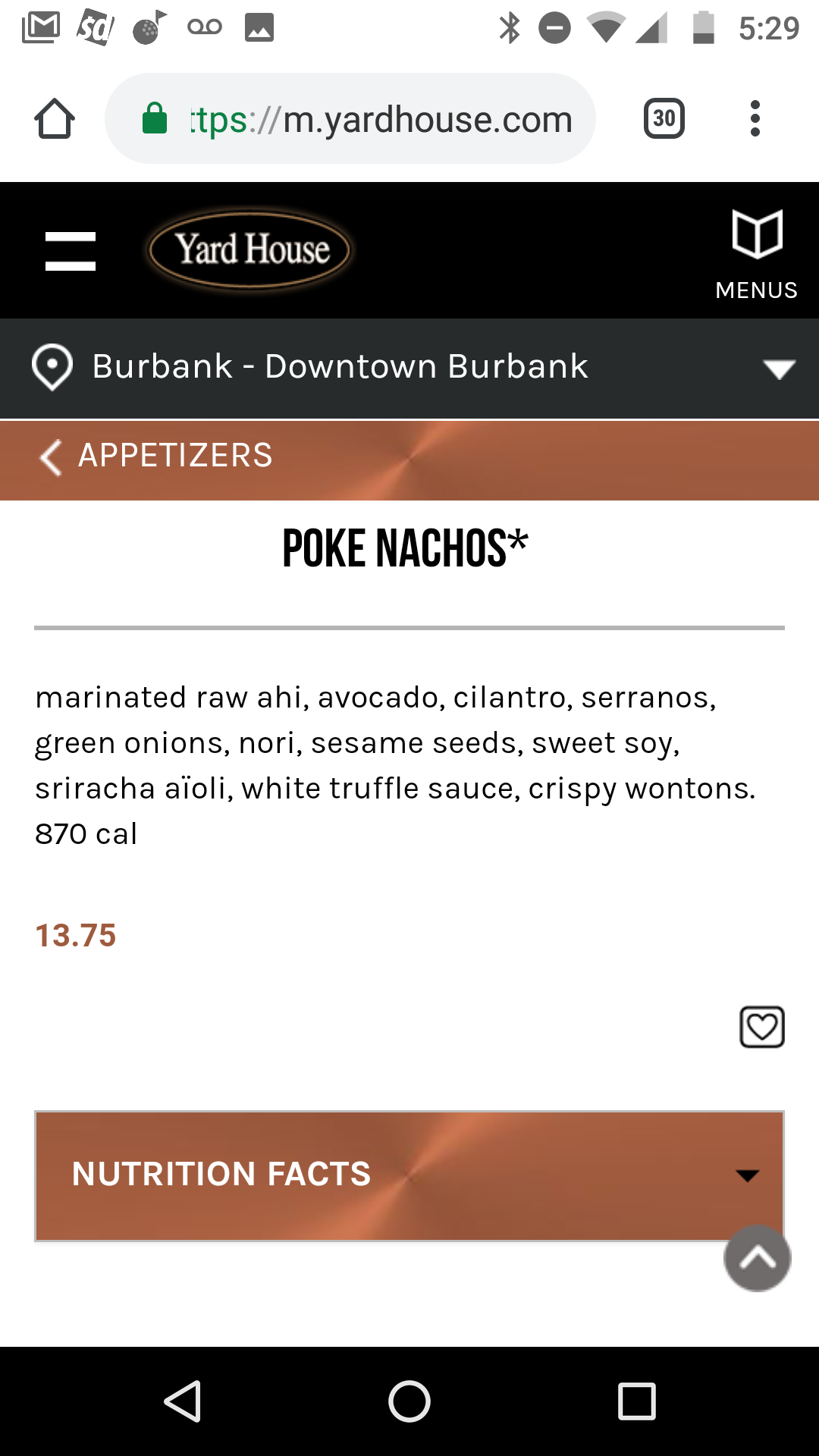 Right now, I could go for the pic with the chipped tooth kid with matching fish...both smiling from ear to ear. Thats how happy I was to get one finally. 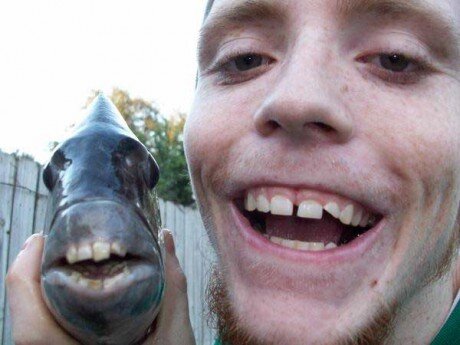 In some weird way, I'm kinda glad it took me a while to get one because I tend remember the things that don't come easy. I've had my fair share of skunky days chasing tuna and it feels great to check a YFT off the list.
Click to expand...

Chris that is Awesome! Don't trip on when you caught it just enjoy the afterglow of your FAT YFT!!!!!!!
Reactions: SaltH20Angler

I love report's like these! Great day for sure
Expand signature
If you stay on a boat long enough you are bound to catch a fish!
Reactions: SaltH20Angler

Nice man. I'm still waiting to get out with you guys
Reactions: SaltH20Angler

That was fun read. Nice job and nice work on busting out the sniper to get low.
Reactions: SaltH20Angler

Bboygadget said:
Nice man. I'm still waiting to get out with you guys
Click to expand...

No doubt Matt, we are looking forward to that as well man. I gotta hit the usual suspects first because those 2 guys have earned their 1st and 2nd spots, but you are third on the list bro. In speaking to you on the phone it is crystal clear to me that you are one fishy dude.

In fact... If anyone is looking for 1 more in the SD area, you should PM @Bboygadget