My friend Evan invited me to go fishing on his Cabo 20 on Sunday. He recently moved here from CA and brought his 20' Cabo walkaround with twin 80 4-strokes with him. His boat is set up for jigging and fishing live bait, not really trolling but I threw my trolling gear in anayways

We met at the harbor at 0400hrs, launched and headed out to make bait. After 2 hours working small bait piles, we managed to put 2 Opelu, and 1 Akule in the 40 gal tank. We ran up towards CO. After finding a pid of Striped Dolphins a few miles south of the bouy, we out a 4 bait mixed bait spread with a 9" Blue/silver fish head slant behind a small bird on a long 80w, 7" Ice Blue bullet on short rigger, 7" black salmon slant on long corner, and 5" Ice Blue chugger on short corner. We worked tue dolphins then Co, then an Aku pile a few miles west of CO with no luck. We trolled westward and worked 2 more Aku piles further outside, and then trolled the 500fa out towards the Kauai Pinnacle.

The plan was to hit the Pinnacle at the 1030hr for moon peak. We spotted a small bird pile on the radar 6nm S, but they broke up before we got there. Then spotted a small pile coming together 3 miles ahead and 1nm S of Pinnacle. At around 1015hrs, as we approached the fast moving birds, the long rod popped and screamed. After a 350 yard run the fish settled down and behaved funny like it was foul-hooked, in 10 minutes we had the fish near the boat and a pulsing rod tip suggested a tail wrapped fish, but as soon as color showed we saw a Yellowfin that was hooked in the mouth. He came in easily and was landed quickly...weird. Turns out he had inhaled the 9" double hook rig which had the forward hook in the jaw, and back hook buried in its gills...
sucka no could breathe?

We worked the area for another 2 hours, then ran East to a bird pile and dropped live baits for an hour. Pulled up and ran to CO where we worked live baits for 2 hours, no bites. We wrapped things up and cleaned the fish while we ran back towards the harbor. The boat was pulles at 430pm, and we saw no sign of the Covid police.

Overall a good day on the water. This was Evan's first real fish in ~5 trips in Hawaii, so he was stoked! I enjoyed hearing about the fishing techniques and approaches he uses to chase Pelagics in CA and Mexico, and am enjoying the fresh Sashimi.

Hopefully we can do it again sometime. 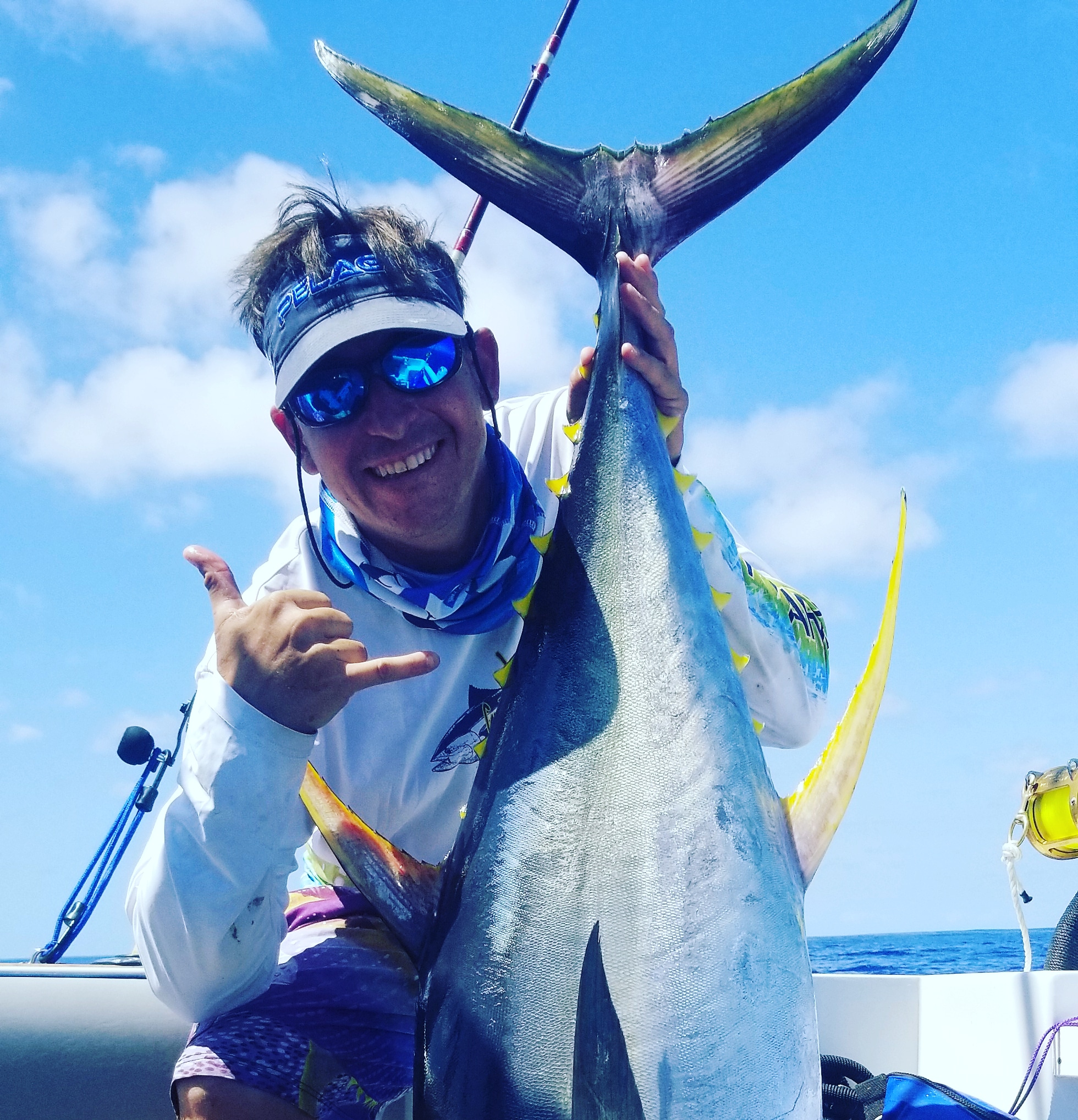 Great write up John
fished with Evan in so cal . He's a fishy dude and one of the Good guys .
Expand signature
Fresh One !
Reactions: blufin10

Evan and John,
Good goin' on the ahi, sweet... I've hooked ahis and marlins in the gills, certainly is a different fight after the initial run (curious, did the hook pop a blood vessel?).

Pat,
No, I didn't see any blood. I am still not convinced he wasn't tail wrapped for part of the fight. I was sure it was a smaller fish. He was kind of a long skinny fish. The last 2 Shibis, and the last marlin we caught were skinny too. I think it has been a tough year to be a Pelagic fish. I suspect the tuna are here earlier this year because we have more bait around the islands. Also, I woukdn't be surprised if the actual spawning events are delayed due to poorer condition of the fish.

I had an interesting talk with my biologist friends the other night about where have all the Mahi gone this past year. The general consensus was that production has been down accross the broader North Pacifc region possibly due to worse conditions. We still get pulses and decent runs but catch has been down overall. The thing about Mahi is, when conditions improve, the population rebounds quickly (though catchable fish are delayed about 6-9 months from peak spawning events). I suspect the Mahi will be back.

Bear in mind, I am just guessing here and coild he totally off track.

John and Evan,
Congrats on your nice Ahi! Nice way to break the ice!
Reactions: blufin10

John, i keep re-reading your post and cant help but notice how you run your lure sizes from the long rod to the short corner. I do opposite of that. Might have to try your technique next time out. Learn something everyday!!
Reactions: blufin10

Honestly this is not how I normally run them.. I was a guest on the boat, usually heavy big slants/scoops in closer, then jetted bullets/inverts, and standard bullets with the long center being a smaller bullet. That big slant actually looked really good way back there, cause the bird kept it poping in the flat water though. It did wander alot in the turns, I prefer the lures to stay where I put em, but it worked so hey I might try a big one on a bird in the long center on a flat day myself..lol
Reactions: Truman