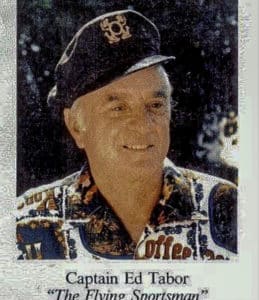 In 1951 while in his early 30’s, Edward Ware Tabor a successful entrepreneur sold his businesses in the United States which included Tabor Luxury Airlines, and he became a very wealthy man. Legend has it that Tabor withdrew all the cash proceeds of the sale, then he and his wife at that time checked into a posh hotel in Los Angeles, dumped all of the money from a large satchel onto the king-sized bed. Later, he explained that they just wanted to see what the fortune looked like piled high on the bed! 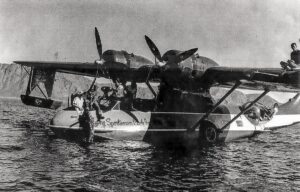 When he spoke of starting a new business in Baja, several of his Mexican friends encouraged him to do some exploring before making any decisions. The impulsive Tabor decided the best way to truly examine the peninsula would be in a seaplane and after a great deal of research, he purchased an amphibious PBY twin-engine plane in preparation for the next chapter of his flamboyant life.

Making numerous exploratory trips – landing at will in various bays and coves along the way – Tabor fished, swam and investigated. He was enchanted by the Baja he discovered, but at some point during every trip he made, he was drawn to Loreto. 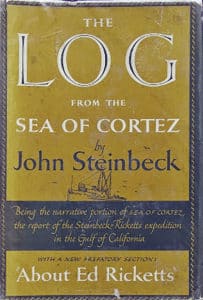 His travels confirmed much of what he had read in his dog-eared copy of John Steinbeck’s book “The Log from the Sea of Cortez” that he had been given soon after it was published in 1941. The account of a marine specimen-collecting boat expedition Steinbeck made in 1940 in the Gulf of California (also known as the Sea of Cortez), with his friend marine biologist Ed Ricketts was an inspiration that Tabor never forgot.

On one of his final exploratory flights, he met two important and influential individuals who contributed a wealth of information about their respective hotel operations. The first was Abelardo Rodriguez, Jr., founder of the Hotel Las Cruces near La Paz, and son of the former President of Mexico who was also a former WWII pilot and interested in aviation; the other was Luis Coppola, founder of the Finisterra Hotel in Cabo San Lucas. 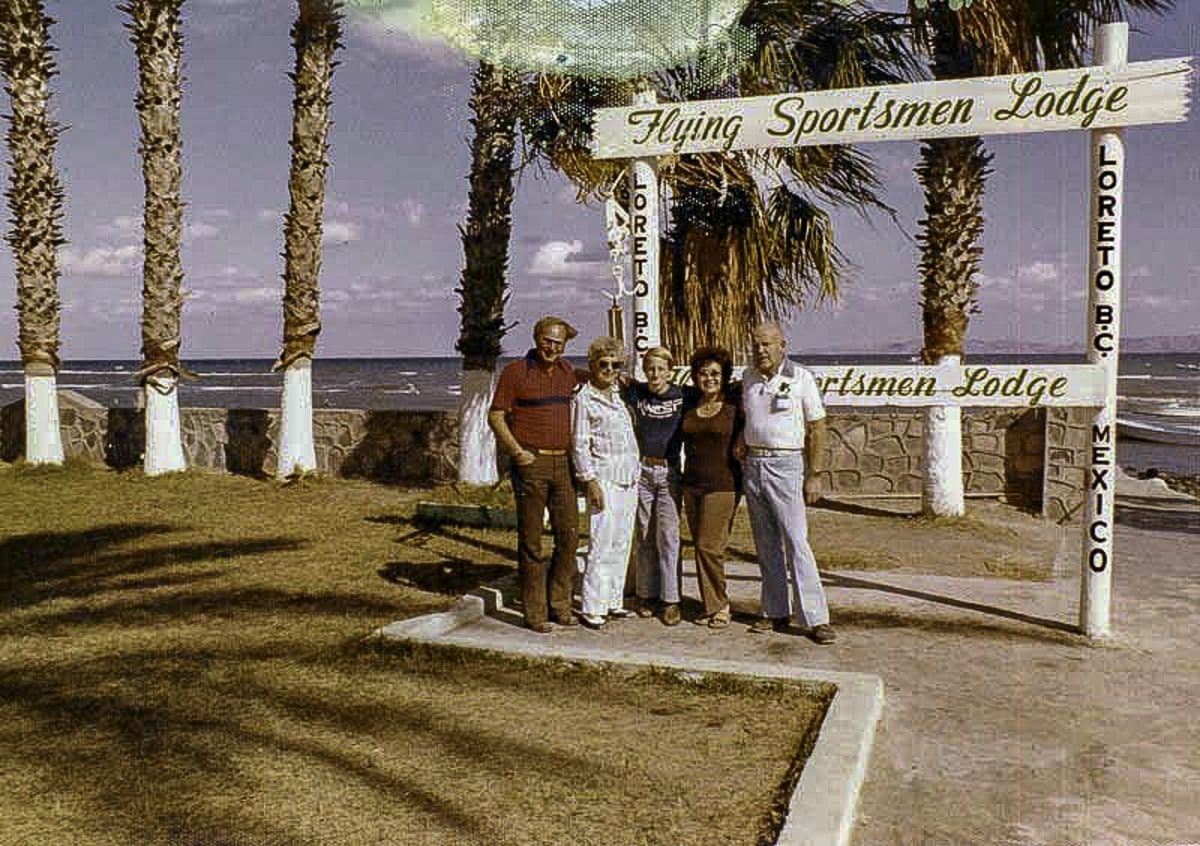 Ignoring the cautionary advice of Coppola and Rodriguez to move forward slowly, the impetuous thirty-something Tabor swaggered into his newest venture with gusto! He began hauling anglers down in his PBY to fish the various areas before finally deciding that Loreto, one of the oldest villages in Baja, would become the home for his Flying Sportsman Lodge. 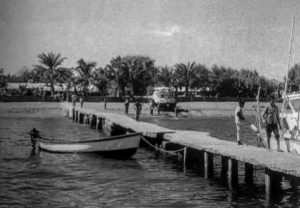 He purchased a property overlooking the Sea of Cortez, complete with a bar and restaurant that served international cuisine. It was also equipped with air conditioning and heating, plus it had its own well and swimming pool. Tabor added a flotilla of sportfishing boats equipped with fishing and diving gear.

Characteristically, Tabor continued on at full speed … traveling straight to Mexico City where he began the challenging process of acquiring the permit to operate an airline in Baja.

After succeeding, he purchased two World War II surplus B-25s, modifying them into 25-seat passenger planes with carpet and small lavatories. Soon, he was transporting guests from Mexicali and Tijuana to his Flying Sportsman Lodge. Divorcing his first wife, he married Bertha Davis, the daughter of an influential Loreto family and they subsequently had two daughters, Susan and Sonia.

The formative 1960s went well as soon as word got out that one could grab a flight in Mexicali or Tijuana and a few hours later be sipping a cerveza or margarita while overlooking the Sea of Cortez, fish for a few days and return to California for a ridiculously small amount of money. 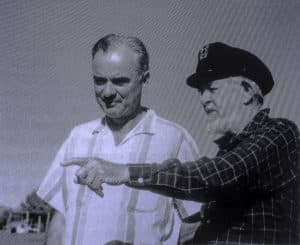 Ray Cannon’s weekly column in Western Outdoor News (beginning in the early 1960s until his death in 1977) described Baja and its Sea of Cortez as teeming with a seemingly unending supply of exotic fish; his descriptions attracted a rugged bunch of bold travelers from California and beyond who bravely took on the Baja badlands long before today’s paved road was little more than a dirt trail used primarily by wagons and horses. His eager fans returned with remarkable stories of the rough and rugged terrain of Baja’s peninsula with water on both sides that was swarming with fish.

By the early ’60s, Tabor upgraded his airplanes. He purchased two surplus DC-3s to accommodate his growing clientele attracted to his successful formula for hotel and air-service to Loreto. 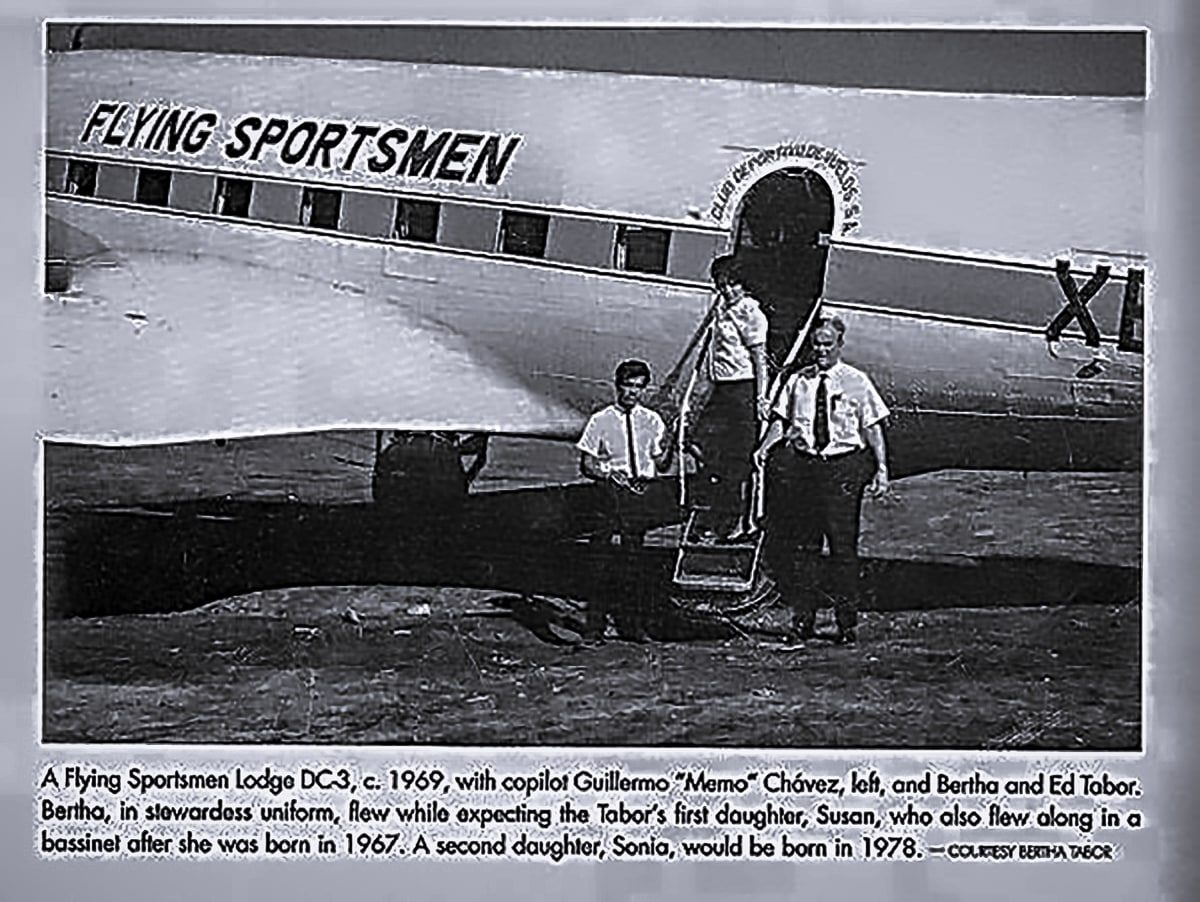 Selling one of the B-25s to a Hollywood film company to be used in the filming of a movie in Guaymas, Sonora – Catch 22 – the other B-25 died a natural death, rotting at the end of an obscure runway in Baja many years later.

When Mex 1 was completed in 1973, the entire 1,100 miles from the U.S. border to Cabo, covering two states – Baja Sur and Baja Norte – offered a narrow, two-lane ribbon of asphalt allowing adventurous souls the ability to not only explore the peninsula by passenger car or light truck, but to also tow their small boats. The first destination for many was one of Ray Cannon’s favorite places, 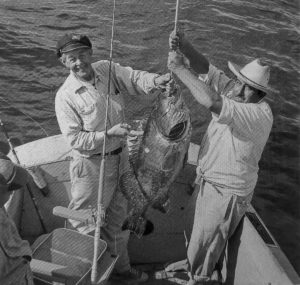 Ed Tabor’s Flying Sportsman Lodge, tucked into the shores of the Sea of Cortez in a small town named Loreto.

By adding Greyhound-style buses, Tabor increased his market to include not only San Diego and Imperial Valley, but all the surrounding counties, including Los Angeles and Las Vegas. He offered an appealing package including transportation, hotel accommodation for three days/two nights and fishing for two days priced at $129.

One early passenger reminisced about his flight down on one of Tabor’s DC-3s.

“The plane reeked of fish that had been hauled home in its luggage compartments. I vividly remember the two dapper-uniformed crew members who boarded after all the passengers 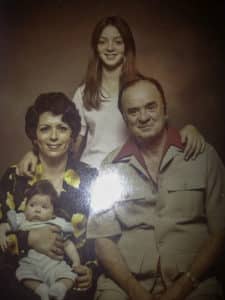 They slowly walked up the aisle that was on a sharp incline (DC-3s were tail draggers), each sipping a bottle of Corona! Tabor was the pilot, a young Mexican was co-pilot and Ed’s wife, Bertha, was the hostess. The box lunches served on the plane were from Kentucky Colonel!”

Both he and Bertha divided their time between the Travel Agency in San Diego and the lodge. They produced a documentary film, Baja Fishing that aired on many of the television outlets throughout the western states. Their telephones rang constantly.

The same year Mex 1 Highway was completed, Aeroméxico began direct flights to Loreto, and the Tabors sold their fleet of DC-3s to the airline.

Soon after, Ed and Bertha relocated to San Diego and began promoting the Flying Sportsman Lodge using travelogue films. They added additional destinations to their travel agency which now also specialized in Hawaii, Mazatlán and other areas of Baja California and Fidencio Pèrpuli was left to run the day-to-day operations at the lodge.

At 61, Tabor became ill and grew progressively worse during the following years, requiring that he be hospitalized in San Diego where he passed away with his beloved wife Bertha and daughters at his side. He was 70.

I, too, was drawn to the Flying Sportsman Lodge by Ray Cannon’s WON columns. There, I met Tabor on an Easter Week trip with my eight-year old-son in 1969. Tabor’s eyes sparkled as he showed us around his beloved lodge, a cornerstone of the early sportfishing industry in Loreto. 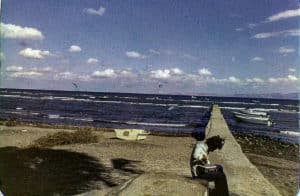 Tabor is long gone, and his lodge has had many owners and several names over the past 40 years. This small village has become a town with an international airport, bus depot and a full array of tourist services without sacrificing its Baja charm.On my travels through Loreto after that time, I had understood that the abandoned Tabor Flying Sportsman Lodge that had once stood with its signature stone and concrete pier was gone; only recently did I discover that the property had been purchased in 1996 by a Central California rancher, Jim Davison.

When I discovered that a beautiful home had been built where the famous lodge had once stood, I began searching again. Not only did I find the home, I found an impressive man, one that I wanted to get to know better, and one that Tabor would probably have enjoyed knowing.

That year, Davison was flying his plane to Los Barriles on one of his frequent fishing trips, and he and his friends stopped in Loreto for lunch. Davison was charmed by the more laid back atmosphere of Loreto and when they suggested staying the night, he agreed.

On a return trip, he began looking around at real estate and discovered the remains of the Tabor property, and after extensive due diligence, he purchased it.

Davison recently confided that he has been a veteran of many ambitious endeavors during his career, developing many different projects and becoming good at seeing the diamonds in the trash and rubble. Nevertheless, his friends suggested that in this case, he might visit a psychiatrist. Even his wife suggested he might have gone off the deep end on this project.

Once escrow closed and before Davison could begin building, the crew removed in excess of 200 dump truck loads of trash from the property.

Vowing to use only the finest materials and equipment, Davison began rebuilding, always deferring to total authenticity.

Trees along the front were only two- to three-feet tall when he purchased the disintegrating structure. Not one tree was cut down; instead, he built around them, allowing some to grow through the roof. He put in drip systems and then he began constructing the walls.

He leveled everything except the main house and a couple of the bungalows. Then he installed a new electrical system, 4,000 gallons of pressurized back-up water, a transformer and a large spa. 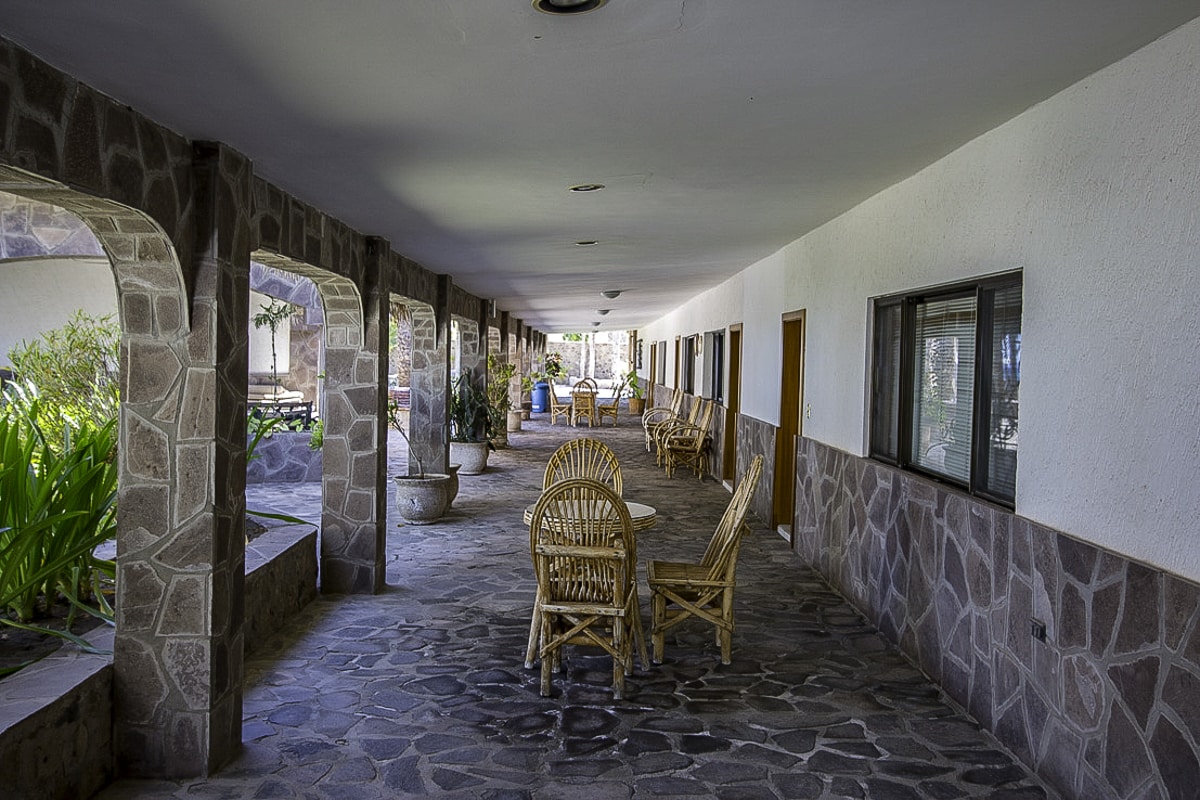 Not one piece of plywood or pine was used on the property. Instead, he imported Philippine mahogany and had it shipped to La Paz. A truck and trailer delivered the rough-hewed mahogany to Loreto.

Next, a carpenter worked for over a year carving doors, building cabinets – everything in the house that was built of wood was built of mahogany because termites don’t eat mahogany!

The original bungalows were redone to match the initial décor. The original “Flying Sportsman Lodge” sign that stood over the structure for hanging fish was replaced with “Casa Davison” also matching the original style. His attention to detail was unbelievable.

In 2007, eleven years after he began, Davison finished his magnificent home, a tribute to his vision, and one that Tabor himself would have been proud of. 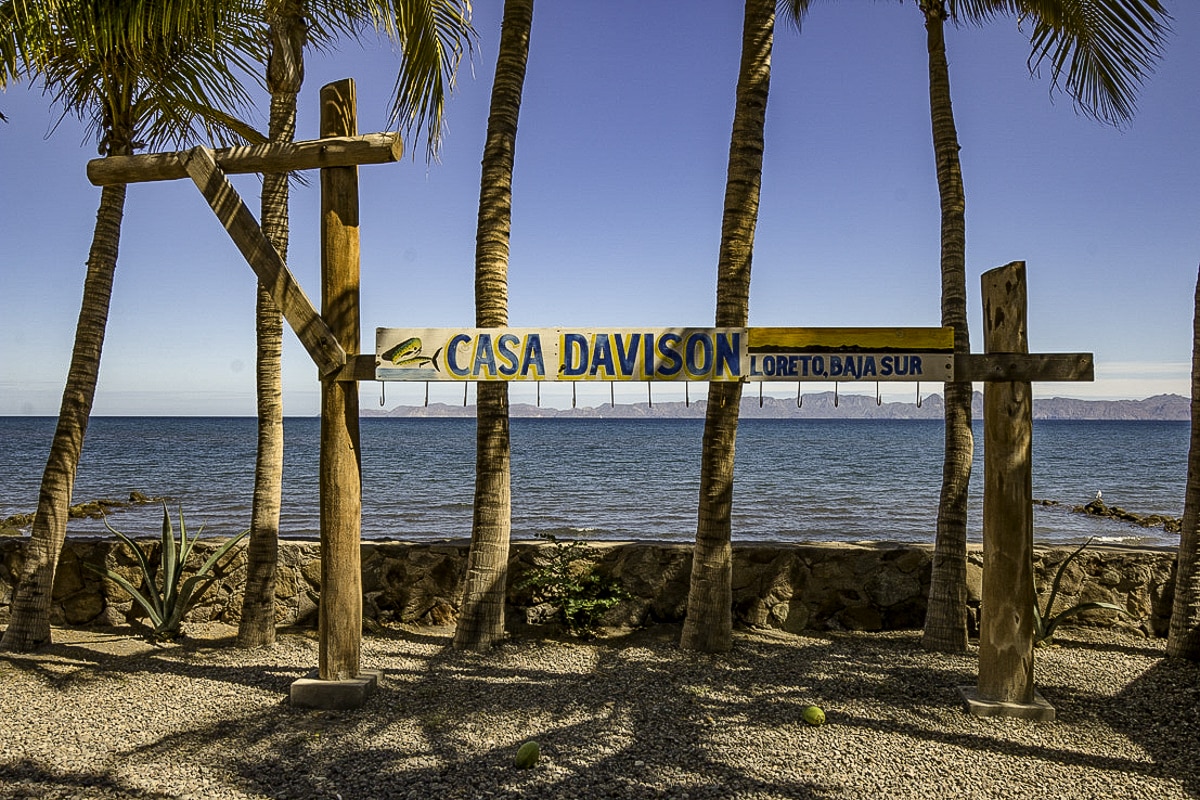 When I first saw Davison’s work, I was surprised — stunned at the beauty that had been raised from the rubble; this was nothing like the hotel that my eight-year-old son and I had stayed in. But both structures had been labors of love built by two successful men who were drawn to the beauty of Loreto, who had their own visions for the one plot of land: one man was rash and impetuous; the other was dedicated and determined. Yet both have left their stamp on Loreto.

I haven’t walked through “Casa Davison,” though I would like to. I would enjoy being shown the project by Jim Davison himself — I want to see if his eyes also sparkle with pride as Tabor’s did when he showed my son and me around his Flying Sportsman Lodge.

A special thanks to David Kier for sharing a few of his family photos.