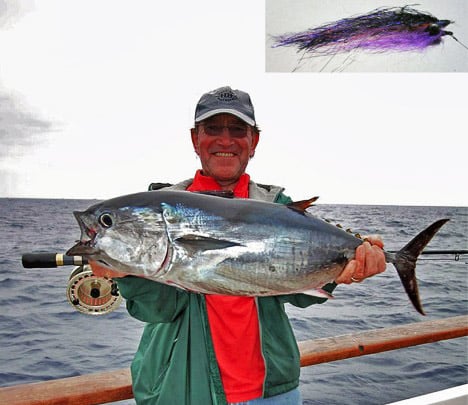 From casual conversations over some chilled refreshments, International Game Fish Association (IGFA) records are set … and then broken.

In 1991 – about three years after introducing the Abel Reel – Steve Abel had an idea about chartering a long range boat out of San Diego, restricting it to fly-fishing only, inviting a select group of top-gun saltwater flyrodders, and setting some records while having some fun. Following preliminary conversations and then negotiations with San Diego’s Frank LoPreste, Abel chartered the 116-foot Royal Polaris, and a groundbreaking saltwater fly-fishing adventure to Baja Mexico’s Alejo Rocks was off and running.

They caught yellowfin tuna; they caught dorado, wahoo, yellowtail, and skipjack by the dozen. But mostly they caught the imagination of saltwater flyfishers everywhere who read about the trip or saw any number of videos of the 10 day adventure. 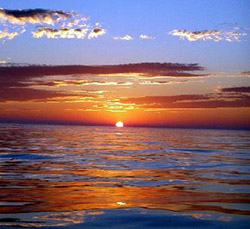 While many fly-fishers lament the need to drive to Mammoth or the Redding area to cast a long rod, others came to the realization that one of the largest fishin’ holes in the world is a stone’s throw from most Southern California neighborhoods – the Pacific! With Abel’s trip as a model, others refined it to one or two day jaunts to the Channel Islands for calicos, Catalina, yellowtail at the Coronado Islands, or Todos Santos Island off Ensenada. Flyrodders refined their skills and learned how to dance around each other when there were multiple hook-ups. And there definitely were multiple hook-ups!

A bigger issue was finding enough fly-fishers to fill an entire charter. It became more difficult as the novelty wore off and boat costs went up along with the price of fuel.

The answer? Hook up with a knowledgeable captain willing to adjust his fishing techniques to the unthinkable … accommodating saltwater flyfishing and conventional anglers on the same trip. The conventional angler, with his hooked fish, can keep the school around the boat long enough for the flyrodders to cast.

Originally, Dave Shaffer (Fishermen’s Spot, Van Nuys) conceived the mixed-trip-method in 1994; Michael Schweit, President of the Southwest Council of the Federation of Flyfishers, assumed the organizing role in 2000.

There have been many notable catches on these trips over the years, but trip regular Colin Waters, Santa Susana, Calif., achieved the ultimate, setting a new International Game Fish Association World Record on 16-pound tippet for a 43.2-pound Pacific Albacore in 2003.

It was quite an accomplishment considering he had to maintain his balance in heavy seas with 10-foot swells and 22 knots of wind while sandwiched in-between anglers sporting short tuna sticks. Using a 30-pound fluorocarbon shock tippet and 500 grain seamless shooting head on a Tibor Gulfstream reel with a 14-weight rod, Colin managed to put his 4-inch blue-back Baby Angel fly in front of an albacore on the stern after the conventional trolling lines hooked a fish. A few strips and he came tight to what would become his fish of a lifetime! Wet, cold and concerned that something would go wrong, Colin hung in there and brought the “fatty” to gaff 15 minutes later. That record still remains after 10 years.

“I caught a 16-pound Pacific bluefin, which I have submitted to IGFA as a potential World Record on a Fly Rod in the 10 Kilo Tippet category. 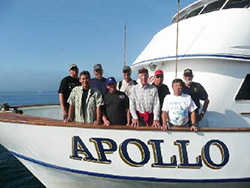 “Around 9 a.m. on our second day out aboard the Apollo, we stopped on a “good looking” sonar mark that after a while developed into a slow “pick” for the bait guys. Half an hour or so later, I was doing the deep-soak with the wind in my face, as I had been doing for two days, every chance I could. I was about to start a retrieve, fly about 100 feet out, when the line got heavy. I thought I’d tangled with a bait guy for a second, but then the fish took off. Fight lasted about 10 minutes. It was a little guy, but the first recorded Pacific bluefin on the fly.” 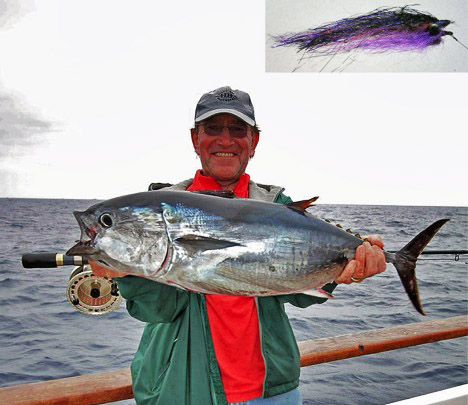 A member of the Southwest Council Federation of Fly Fishers as well as his local club, Waters tied a fly that closely imitated what the tuna were feeding on, a smallish dark purple fish, species unknown. “So I designed a fly in an attempt to match the hatch,” he grinning.

Schweit, president of the SWC-FFF who happened to be on the record-setting trip, praised Waters’ skill both in landing the bluefin on light tippet, and in hand-tying the fly that did the job. “A fly tied for about 50 cents of material sure beats those $5.95 lures,” he said.

Thanks to Steve’s Abel’s nearly 25-year old idea, saltwater flyrod trips are now being booked by fly shops from San Diego to Santa Barbara. Or contact Schweit at (818) 757-3474; [email protected]