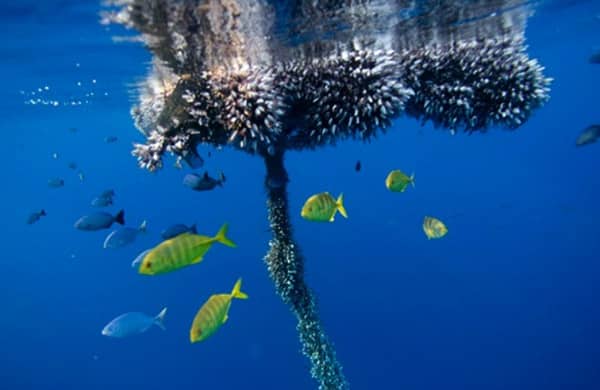 It was my first summer crewing on a long-range boat, the Polaris Supreme no less. We were steaming down the line heading for Alijos Rocks for a shot at fall wahoo and yellowfin tuna. About forty miles north of the seamount we came across what can be considered flotsam and jetsam, a giant, waterlogged, redwood barely floating above the surface. The tree had been logged but somehow, possibly falling off a lumber ship or barge, had made its way into these tropical waters. A couple of sea turtles sat on top of the dark mossy ancient tree sunning themselves. One tern stood on a knob where a branch had once been cut. Rolling up on the stout, barnacled log, which looked like it had been at sea for months, if not years, the skipper, pulled back on the throttles.

As soon as the first baits hit the water, the ocean erupted with boils of small yellowfin tuna and big brilliant dorado. The clear purple water lit up with hundreds of frenzied dolphin fish and below, tuna were shooting around under the school like dark bullets.

The fish charged and every rod on the boat doubled over. When the melee ended, all onboard agreed, it was one of the most incredible bites, any of us had ever seen. And, it was an example of how effective flotsam and jetsam is as an attraction for offshore gamefish.

Flotsam originally, was defined as wreckage or cargo left floating at sea after a ship has sunk. Jetsam was defined as cargo or equipment jettisoned by a ship in distress. Today, the two are combined in a common phrase meaning generally, anything that is found adrift at sea, or washed ashore.

Flotsam and jetsam can take many forms all of which provide habitat for many pelagic and juvenile pelagic fish. The most common forms on the west coast and one that loosely fits the definition are kelp mats or paddies that have broken off coastal kelp beds. But many other floating items that have been drifting offshore for a period of time will aggregate fish. Common things like trees and branches, pallets, odd lumber and plywood, will all hold fish. Uncommon items like a refrigerator, an old skiff, a coke machine, dead whales or sea lions also will attract fish.

Scientists believe the floating object picks up the first hitchhikers a couple of different ways. First, the object may originate from coastal waters and on its way out to sea will pick up a host of smaller species that will use the structure of the flotsam and jetsam as it would any other structure. The species will stay with the object if the habitat and ocean conditions are favorable. Other objects will pick up pelagic juvenile offshore fish at sea and these young fish will seek shelter, feed and grow together as the object drifts at sea. Once smaller fish aggregate, larger predator fish will soon find and relate to the structure. These smaller fishes are subject to predation in open sea and find the flotsam and jetsam advantageous in a number of different ways. Firstly, the object provides direct shelter and food for many species. In the case of a large kelp paddy with lots of kelp stringers, the small fish can tuck into the leafy mass. Food items like sea moss, small shrimp and invertebrate living on the object, will provide, bottom of the food chain, forage. Secondly, the silhouettes of associated fishes are tough to see against the dark backdrop of the floating object. Some fish will also camouflage themselves in and around the object. Schooling fish, like juvenile skipjack or tuna, also use the structure to protect the blind spot of the school and prevent an attack from that direction. Yet other species, smaller prey species will use the flotsam and jetsam as spawning aggregate. Finally, it is widely held that the object may tend to inhibit the effectiveness of predatory behavior. Larger predatory fish may be reluctant to lunge into a school relating tightly to the structure for fear of collision. In a reflex response, the predator may veer slightly or hesitate momentarily allowing the prey fish to escape. With that said, however, the aggregation of prey fish on the flotsam and jetsam will always attract the attention of predators. And despite the possible inefficiencies of predator tactics close to the structure, the sheer number of opportunities to prey around the structure will draw large schools of predatory fish regardless.

There have been many studies done on the relationship of fish to floating objects. Most of the best information has come from observing fish behavior around man-made fish attraction devices or FADs. Because these objects are anchored to the seafloor rather than free floating, scientist can more closely observe fish behavior in the waters surrounding them. Some of the better studies on how fish relate to floating objects have been conducted off the Hawaiian Islands, which deploy some 55 anchored FADs. An experimental study in Hawaii found several species of pelagic fish associated with the structures. Fish found in many different sizes include bigeye, yellowfin, skipjack, kawakawa, dorado, wahoo, blue marlin, striped marlin, shortbill spearfish, rainbow runner, amberjack, barracuda, sharks and juveniles of all species. Scientists noted that many of the predator fish like yellowfin tuna were present around the FADs in schools ranging in size from two pounds to ninety pounds. Smaller fish were prey and larger fish of the same species were predators. It was noted small tuna stayed tight to the structure and large tuna strayed two or three miles or more during the day and returned to the FADs at night. Fishing boats participating in the study caught tuna at the FAD at daybreak and moved away from the structure after sunrise while fishing the same school. Other species such as marlin and spearfish were caught near the structure and as far as a mile away. Most dorado were taken within 150 feet of the FAD with a few schools scattered as far as four miles away. Many of the FADs observed were in groupings with several FADs in the same area. Interestingly, larger predatory tuna schools did not appear to move freely between stations indicated a strong attachment to an individual FAD.

A study using sonar in French Polynesia, found large shoals of juvenile bigeye and yellowfin tuna aggregated closest to the devices, 30 to 150 feet. Further out, at about 150 to 500 feet, there was a less dense group of larger yellowfin and albacore tuna. Yet further out, to 5000 feet and beyond was a dispersed group of various large adult tuna. The distribution and density of these groups was variable and overlapped and at sundown, the aggregations dispersed. Over the years, fishermen have learned the importance of flotsam and jetsam in attracting top-line ocean predators. If the floating structure is located in waters favorable to that particular species, then there is a good chance that that species will be there. For this reason, when on the grounds, offshore fishing boats will always put a man in the stick with a set of binos, looking for flotsam and jetsam that will put a magnificent catch of fish on the deck of the boat.

Polaris Supreme
Come join us aboard the Polaris Supreme! Our experienced and totally dedicated crew would like to offer you the opportunity to fish aboard one the new...