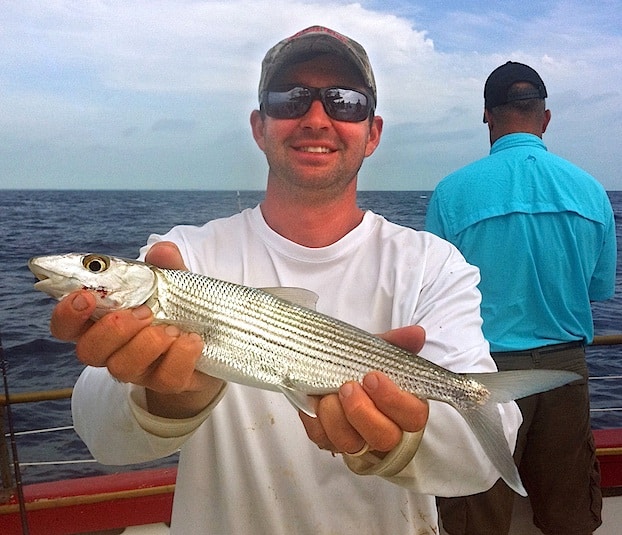 Florida Keys Bonefish Deep – Ever dreamt of catching bonefish in the Florida Keys?

How about fishing for them in water as deep as 130 feet?

For inshore flats anglers, the concept of catching bones in deep water seems absolutely absurd. After all, bonefish are normally caught and released in shallow waters anywhere from 1 to 4 feet using light-spin, fly or plug tackle.

But during the past holiday season, anglers aboard two Islamorada-based party boats reeled in bonefish out in the deep water while targeting lane snapper and porgies.

An angler on the Miss Islamorada, skippered by Capt. Ben Loy out of Bud N’ Mary’s Fishing Marina, caught a small bonefish in the early afternoon of December 29th. The fisherman was using a rig with multiple hooks baited with squid. The surprise “silver ghost” was photographed and quickly released.

“I’ve never seen anything like that,” Loy said. “Who would have ever thought about catching a bonefish in 130 feet of water?”

But it turns out that wasn’t the only bonefish caught in deep water off Islamorada in recent days.

Last Friday night, anglers onboard the Captain Michael out of Robbie’s Marina in Islamorada were fishing a wreck in 119 feet.

Using the same deep-bottom tackle — known as chicken rigs — and squid for bait, they caught and released eight bonefish ranging from 18 to 24 inches. The next night, anglers on the Captain Michael, skippered by Tony Narvaez, scored two more bones.

“They were very lively,” Narvaez said. “Once we tossed them back in the water, they took off.”

Dr. Jerry Ault, director of the University of Miami Bonefish and Tarpon Research Center, said that the fish encountered in deep water were likely spawning and that late December through early January represents the height of the bonefish reproductive season.

“Bonefish tend to spawn in deep water near the edge of the continental shelf, but it’s certainly unusual to catch a bonefish in that kind of depth,” Ault said. “Typically, they are inshore and this is really cool and of great [research] interest.”

Although Florida Keys flats guides needn’t worry about deep-water bonefish replacing traditional shallow-water targets, catching a bonefish did fulfill a goal for one of Loy’s anglers.

“When he came on board, he said that he wanted to catch a swordfish or something really exotic,” Loy said. “He got a bonefish instead and that’s really special.”