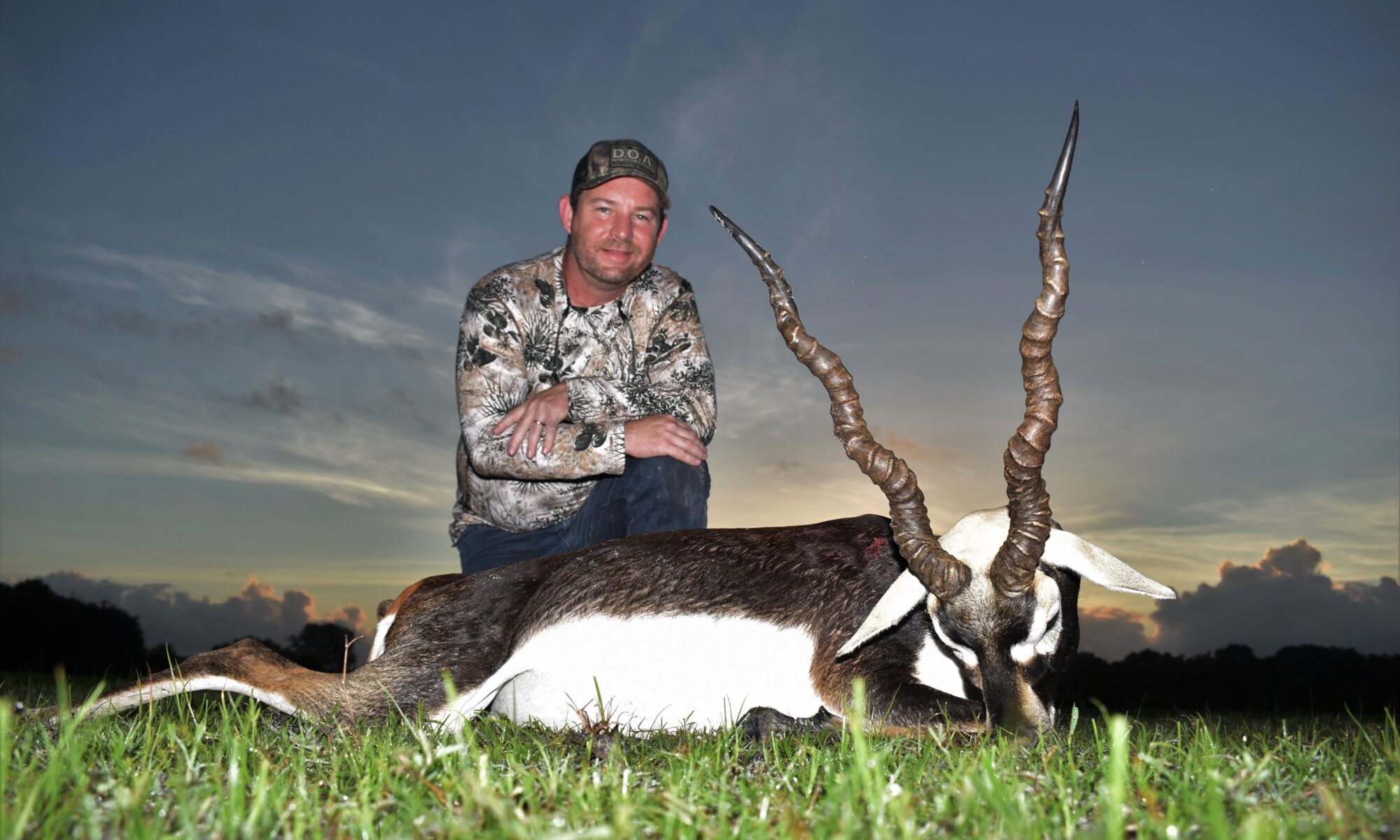 This Florida-Based hunting lodge has a lot to offer and might be the perfect “staycation” for great hunting, food, and fun. 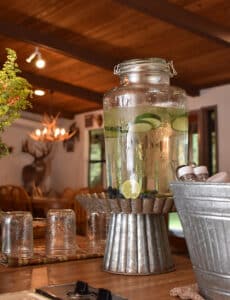 On a warm September afternoon seated at the head of the table is Ian Hall. Hands clasped, he gives a short prayer before his wife Susan, friend Bob, and myself begin a delectable lunch consisting of fresh stone crab, tossed salad, and lobster tail leaving little room for the cobbler dessert. Through the wood-framed window of the cracker style lodge, an American flag waves in the breeze as their son Hunter arrives by tractor late from clearing brush. Ian and his wife recently opened Florida Hunting Adventures in Okeechobee Florida, a large ranch offering whitetail, turkey, exotics, dove, quail, and wild boar hunts. Fixated on hunting Texas over the past decade, this time of year was typically filled with pre-booking flights, rental cars, coordinating arrivals and departures, and all the logistics required for group trips across the country. Unfortunately, my 2020 plans fizzled with the arrival of Covid-19 canceling my chances at a Hill country blackbuck this summer. But after receiving a call from my buddy Bob also a native Floridian who’d already hunted a nice axis bull with Ian, I realized we may have discovered a gem right under our nose. 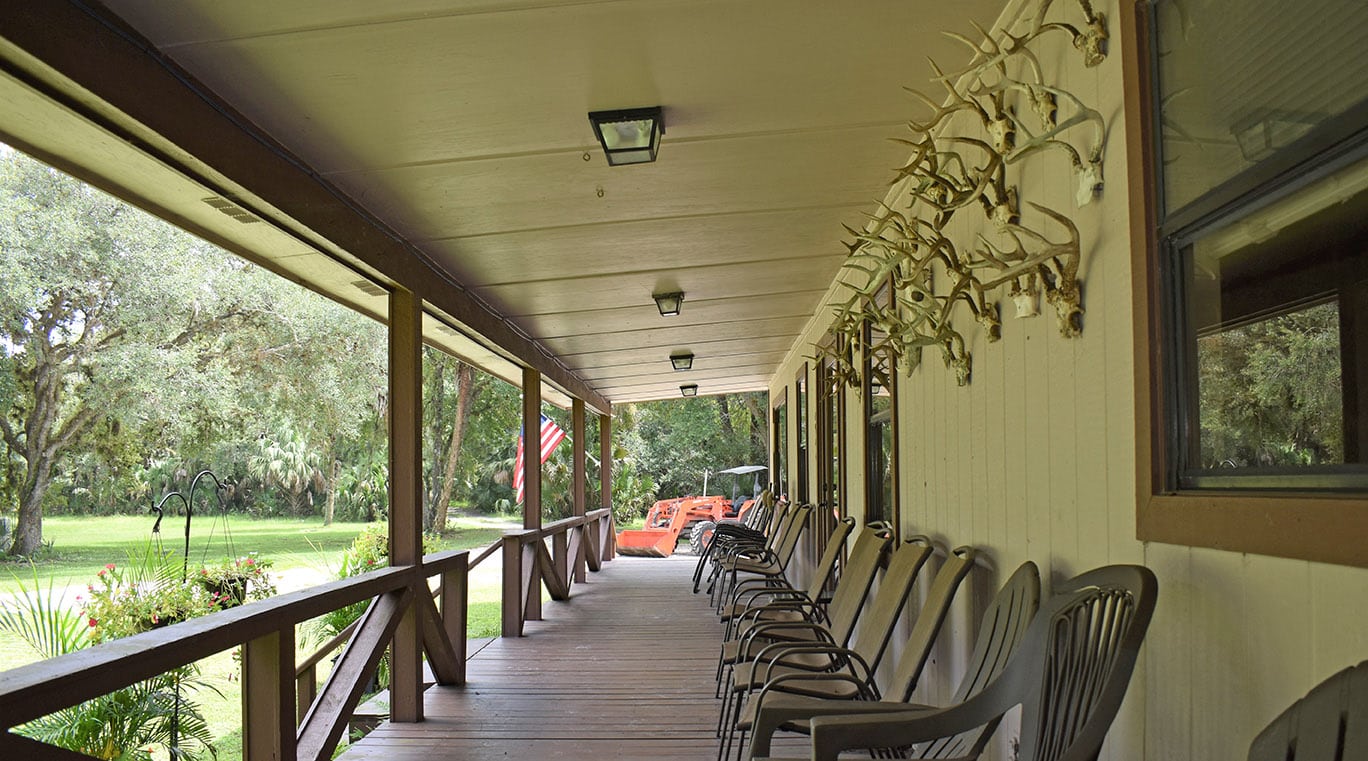 I truly enjoyed the ease of hopping into my pickup for the short hour and a half drive to the ranch from my home in Winter Garden without languishing in Orlando International Airport’s dreaded security line. Even more so was after arriving, sighting in my rifle and climbing in the stand, the sound of cabbage palm fronds rustling in the breeze were almost therapeutic in comparison to what my first-day travel experience had become. Seated high in a well-constructed wood platform nestled at the edge of an oak hammock, Hunter and I sat watching scores of dove dart across a large sawgrass prairie in route to a fresh sprouted field of browntop millet. 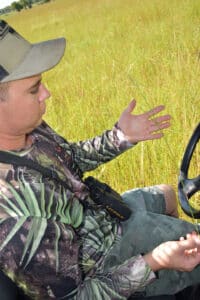 “Our dove hunts are insane” he joked. His eyes fixated on the squads of resident birds clouding the horizon. Below a small circular food plot green with aeschynomene buffered our location from a large meadow of south Florida limpograss where a group of blackbuck does drew closer. Through the tall stems, their backs were barely visible as they fed, disappearing for minutes at a time.  A few hundred yards to the left several young blackbuck males began to appear so I grabbed my binoculars for a closer look. “Little too young,” whispered Hunter.

Before long a pair of dark spiral horns emerged behind the does followed by the unmistakable black and white mask of a mature blackbuck. “That’s a stud right there,” hissed Hunter as the dominant buck began lekking in display for its harem. Still at least 500-yards away we waited for it to move closer but unfortunately, the old buck maintained a safe distance until dark. The following morning Hunter and I drove back to the oak hammock and began a long sneak on foot through the woods to the same ladder stand as not to expose ourselves to the food plot. My boot crunching on dry palm fronds was a new challenge to maintaining our silence as what sounded like a deer tore out of the brush on my second step. Eventually, we made it to the blind and climbed up. As we waited, the pre-dawn silhouette of a giant axis bull well north of 30-inches in horn length and over 200-pounds in weight slowly lumbered across the clearing giving me pause for my desire to hunt a blackbuck if only for the moment. Thankfully as the sun began to rise, a lone mature blackbuck slowly made its way into the clearing stopping about a hundred yards from the blind.

“That’s a good one,” hissed Hunter.  “Might be that dominant male from last night.”

Slowly I raised my 6.5 Creedmoor and took aim sliding my elbow to rest on the pine railing of the stand. 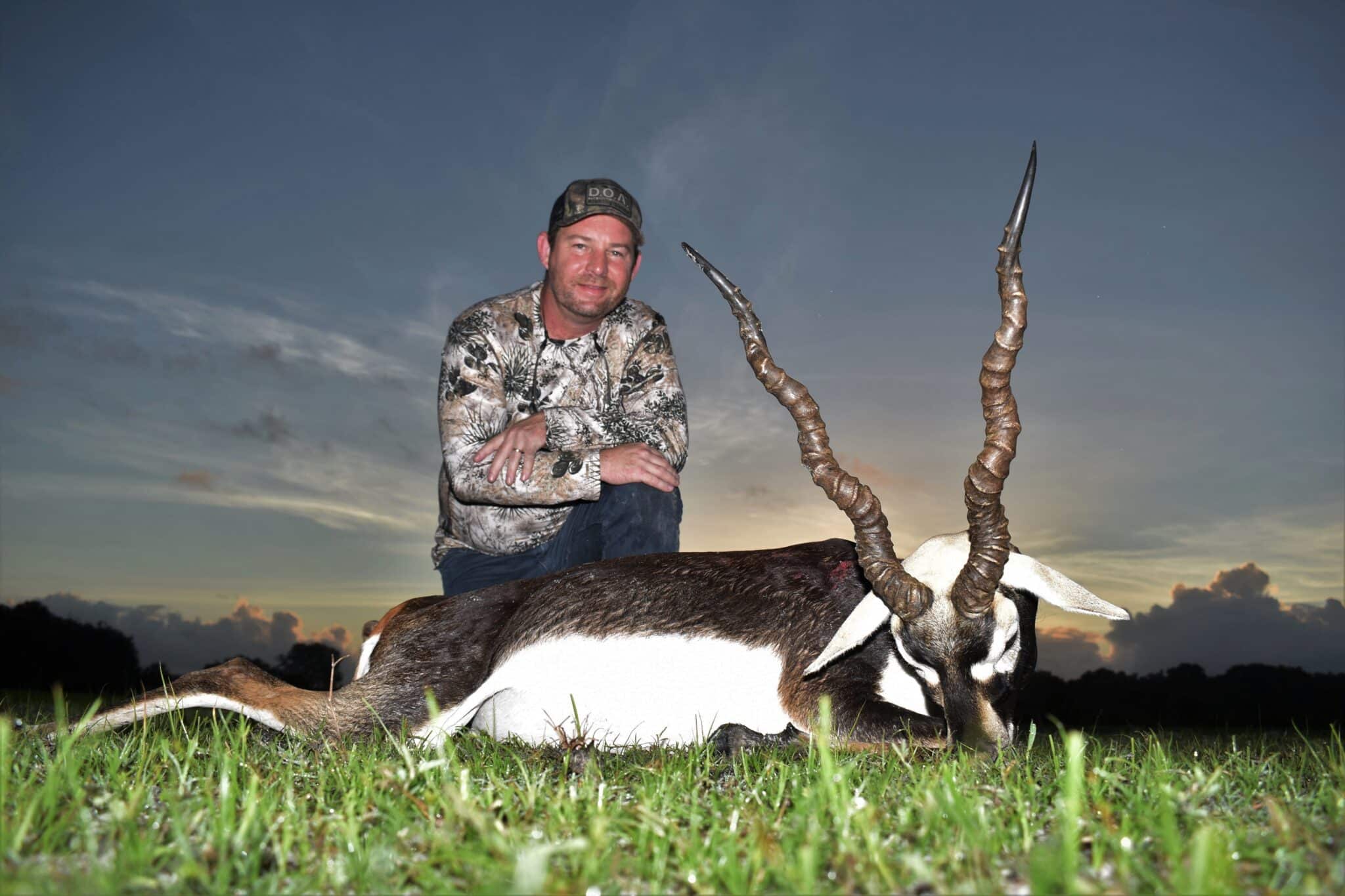 The light recoil was barely noticeable as the antelope slumped in place as Hunter and I celebrated with a high five. Of all the years I’ve been blessed to pose with exotic trophies, this one was extra special as it’s the first to be back-dropped with a beautiful Florida sunrise. 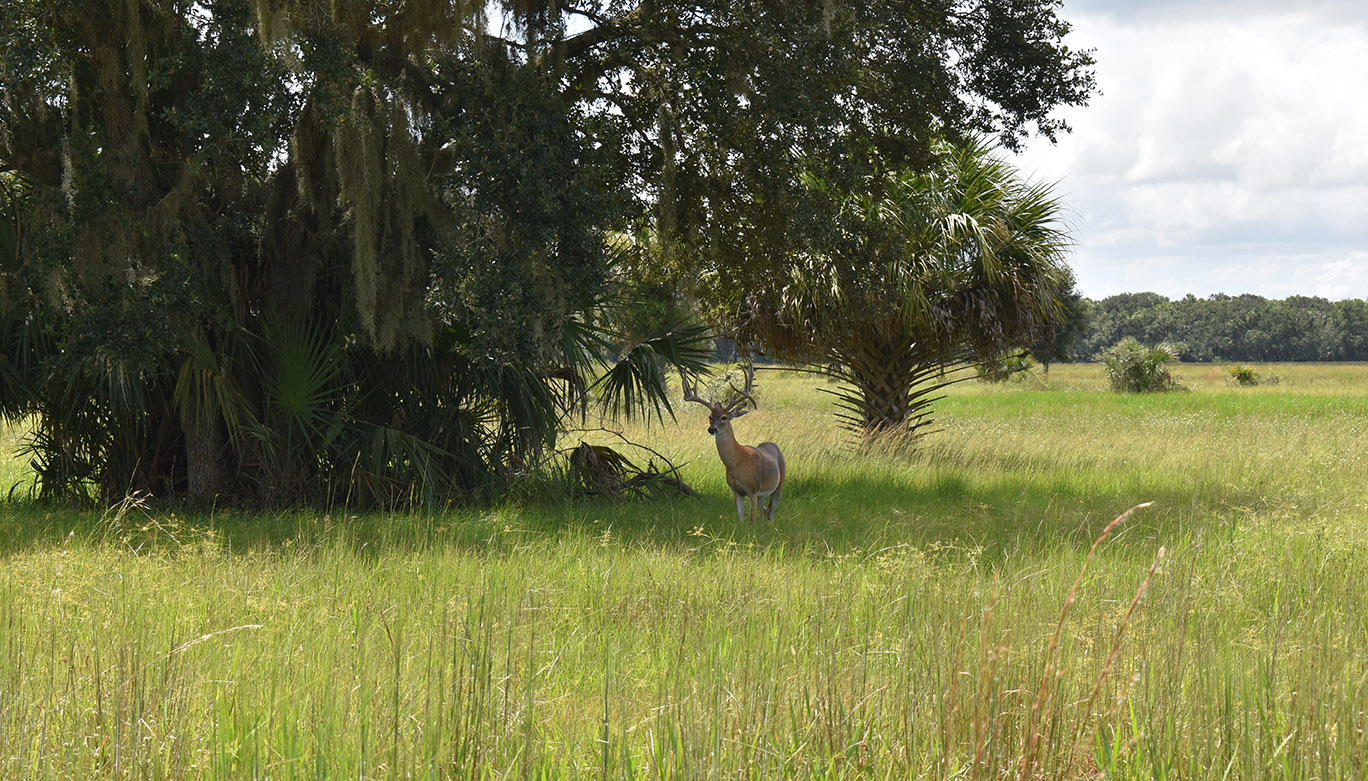 After loading the antelope in the buggy we drove the scenic 1,000 + acre ranch slowing for several velvet whitetail bucks sprinting for cover followed by a group of Osceola gobblers feeding near the lodge. Nearing the skinning shed a group of quail scurried across the dirt drive as the aroma of fresh ground coffee mingled with frying eggs and ham grew stronger. In a few hours, the meat will be dropped off to the processor and by afternoon, I’m already home unpacking my gear. While this season has been uncertain, to say the least, discovering a well-run Florida hunting option has been a silver lining to an otherwise cloudy start. 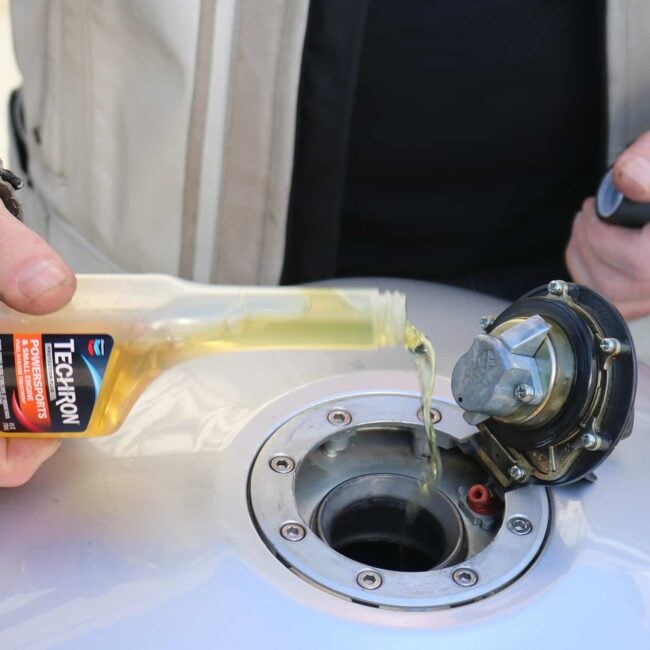 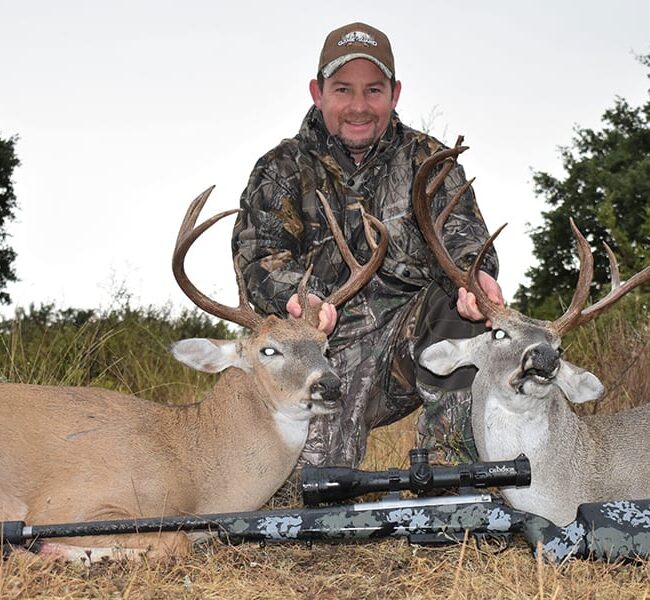 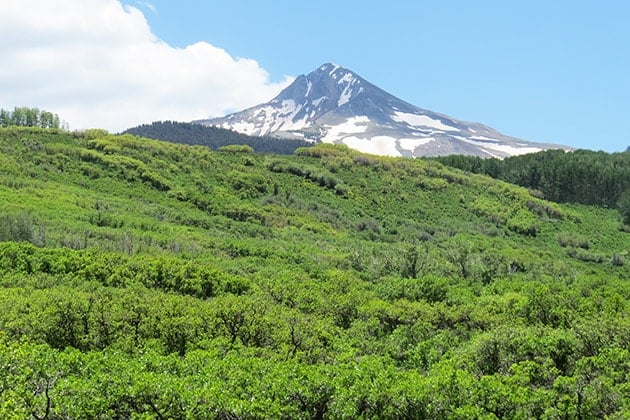 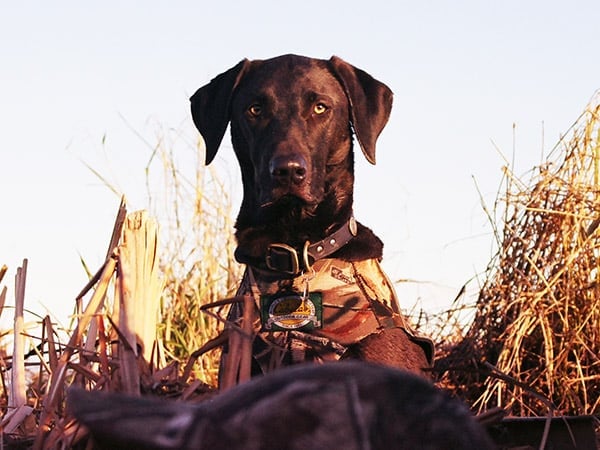 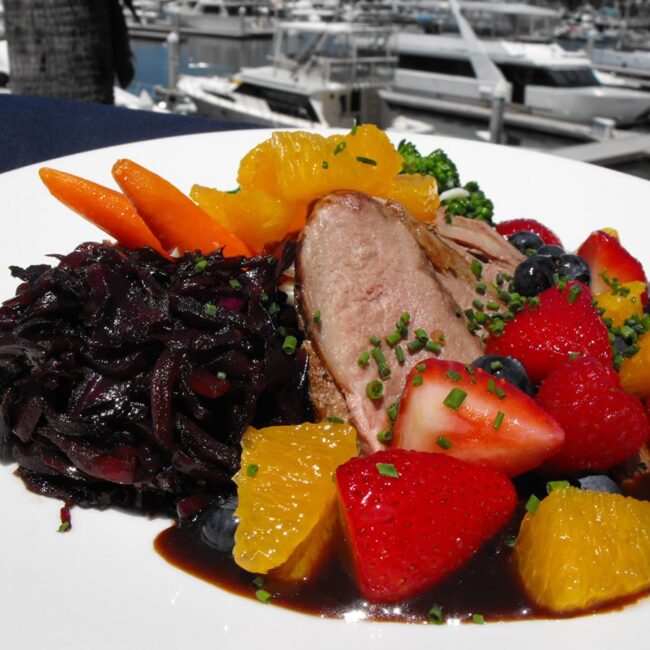