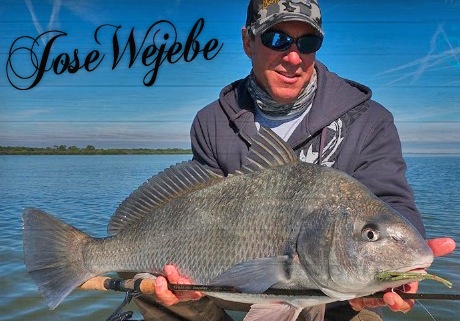 Leaving the motor behind, we head out with friends on a chilly Florida morning to hunt black drum and redfish in the No Motor Zone of the Banana River. With temperatures in the low 30’s overnight, the motor wasn’t the only thing we needed to get off the Hells Bay skiff in the morning! Derek Redwine spells the mission on the morning frost… No Motor Zone or bust! Derek Redwine and Jose Wejebe make a fashion statement while trying to stay warm on the icy Florida morning. The only gloves we could find were those of Derek’s wife, Cory. A few minutes to pull the motor off and our Hells Bay Glades Skiff is now the perfect stealth, No Motor Zone, drum-hunting machine! The NMZ is a great place for canoes and kayaks as well. Polling along quietly, we search for tailing redfish and black drum high up on the shallow waters of Florida’s Space Coast! We had actually launched two boats, Tyler Shealey, Chris “Bootsy” Wilson and I headed out in one boat. …while Derek Redwine and photographer David McCleaf paddled their own, appropriately named “Ditch Bitch” to a different area. Ready and able, standing by for signs of life on the shallows. We look for tails breaking the surface of the water as redfish and black drum get high up on the flats. This is perfect weather for fishing black drum. Several cold nights in a row followed by a windless, warming day. Here is what a redfish tail looks like. The dark spots at the base of the tail are a dead giveaway; however, from far away you can’t always see the spots. So, the best identifier at a distance is the long, tapered shape of the fin that separates the redfish from the black drum. For redfish, we typically cast in front of them, and then retrieve the lure by bumping it close to the bottom. Here is what a black drum tail looks like when sticking out of the water. Notice the tip of the fin is a bit squared off. The first thing is to identify what tail you are looking at and fish accordingly. While we keep the lure moving for redfish, for black drum, we leave the lure motionless on the bottom, a technique known as dead-sticking! To catch black drum we use the dead-sticking technique. We locate tailing fish, figure out what direction they are facing, cast the lure beyond them so as not to spook them, then retrieve the lure a few feet in front of the fish before dropping the rod tip and letting the bait sink motionless in front of the fish, letting the smelly bait work its magic. I put the dead-stick technique to the test and hook a No Motor Zone black drum! A little dead-stick success as a nice Banana River black drum comes to the boat. While much attention is paid to the redfish, the black drum offers a great opportunity to sight cast to large fish in shallow water. Because they are more tolerant of cold temps, they are a great reason to hit the flats on a beautiful day! Black drum front and center and the beautiful Cape Canaveral coastline in the back… Welcome to the No Motor Zone! Tyler’s turn on the bow, hooked up with a drum of his own! Fishing was great in the No Motor Zone. With plenty of drum tailing the shallows, we each had a shot at a fish. Here, Tyler enjoys the awesome thump of a black drum in the boat. Friend and fellow angler Bootsy hooks up with another dead-sticked black drum. There’s a point where you can actually see the fish in the water. Best way to stalk them is to first spot the tail and then quietly pole close enough to the fish until you see it and which way it is facing.That lets you know exactly where to cast. Chris Wilson with a nice black drum. Notice his jacket is off and how calm it is in the background. This tells you that a calm and warming period after a cold front is the perfect weather scenario to find these fish. Photographer David McCleaf poles while Derek Redwine looks for fish in the water. A lot of times an angler can have a huge advantage sighting fish if he can stand just a foot taller on the bow. Here, Derek stands on a Sea-deck covered Yeti cooler placed on the bow as a casting platform. With the Banana River practically in his backyard, Derek Redwine is no stranger to the stealth art of NMZ drum fishing! David McCleaf takes time to photograph Derek and some of the beauty of the Banana River. With one angler left to catch a fish, David McCleaf, equally adept with a fishing rod as he is with a camera, brings in a nice-sized black drum. Get to know Jose Wejebe and follow his adventures on his Facebook page by clicking on the photo above.

Jose Wejebe
Jose Wejebe, well-known fisherman and host of the popular television show Spanish Fly, was born in Havana, Cuba, in 1958. He and his family fled Castr...