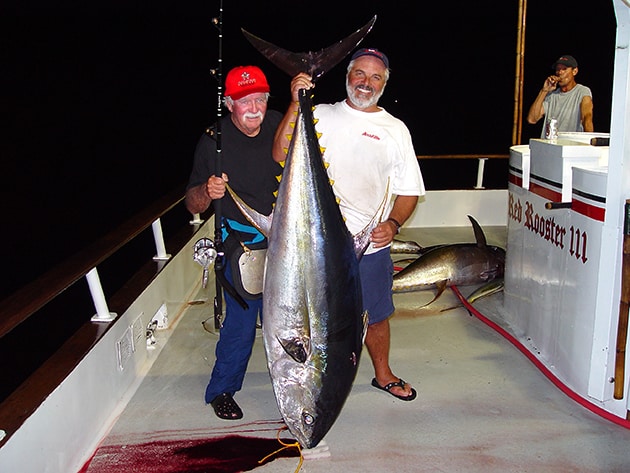 This is Part 2 to the story of Del Marsh‘s life. He was too large a man in life to contain in one article. Nothing quite describes him like this tribute from Gary Shiebler.

It was difficult to portray Del Marsh with mere words. Del was a chameleon … his fun-filled personality changed to meet the personalities of those around him. He loved people, and his love was reciprocated.

“Del Marsh was the wealthiest man you could ever meet who didn’t have a large bank account.”

Still riding high from his “smallest grander” in late September of 1989, Del Marsh careened into the nineties – ignoring the economic recession that swirled throughout California and beyond. His son, Steve, best summed up his father: “Dad was always getting ready for another fishing trip!” 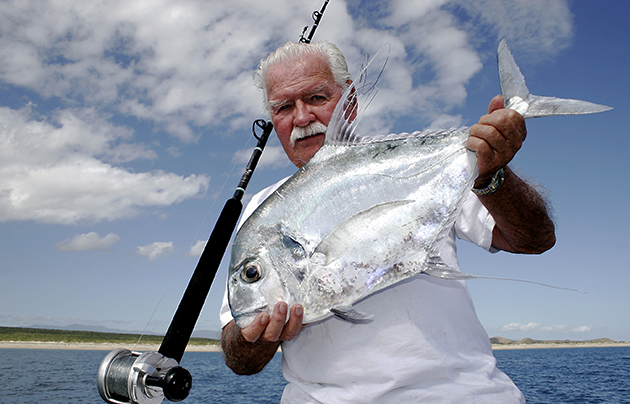 “Del Marsh — the guy who could walk the walk, talk the talk, and was one helluva’ fisherman!” … Pat McDonell. 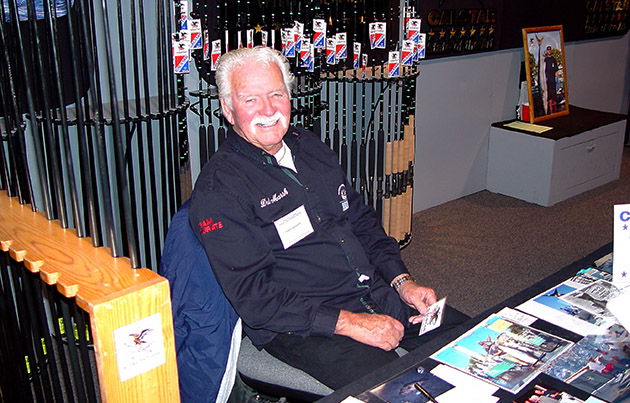 Nilsen suddenly ceased being a spectator at sport fishing and outdoor shows and became an exhibitor, thrusting him into another facet of Marsh’s wacky world, best known to many as a member of the Tackle Specialties/Calstar Rods team in the booth at the Fred Hall shows in Long Beach and Del Mar.

Wisely, Nilsen sought Marsh’s advice … and that resulted in a friendship filled with laughter and camaraderie that would endure forever. “Del provided me and my sons with an insight into the industry that was invaluable,” Nilsen observed recently.

Nilson continued, “With Del coaching, my sons and I learned about this new business environment; he also explained the good news and the bad in the industry as well as who were the good guys and who were the bad . . .”

“You can judge the character of someone by how many people they have touched personally and the number of friends they have. This man was rich in both. God speed my good man. We can only hope the last chapters of our lives are the same.” 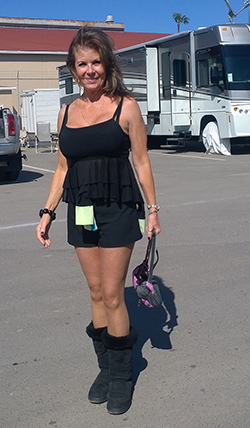 Del’s antics at the shows were legend. According to Sandy “Medusa” Kaiser, former-wife of the owner of the boat in Hawaii on which Marsh had caught his “Grander,” “When I visited him in the booth, he always insisted I sit on his lap. Then he would tell everyone who stopped at the counter that I was his “ex” trying to collect alimony from him and that I refused to leave the booth until I received my back alimony.”

When a group of buddies at one of the hunting and fishing shows in Northern California organized a casual “Mud Marlin,” i.e., bat-ray tournament, after the show closed one night, he was in!

“I fished with Del off the surf in Baja. We had a great time! Del was a **** of a guy; we played golf in the sands off of Laguna Manuela — pretty fun. He was larger than life. He did what he wanted to do whenever he wanted to. There is something to be said for that!”…CF

“How large is your boat?” he was asked. “I don’t know,” Marsh replied. “Right now I only have an inner-tube and an anchor. Can you write a policy that will cover that?” The conversation continued for nearly 10 minutes back and forth before the poor guy realized that he’d been had.

“Del was one of my very best friends. He was a man’s man who always had funny stories. He had a way of making you laugh.”

Nilsen and Marsh’s first of countless long-range trips was aboard the Q-105 with Captain Jack Webster as skipper. Del and Jack Webster were good friends, as was Captain John Klein. Klein owned the boat and loved having Del aboard. 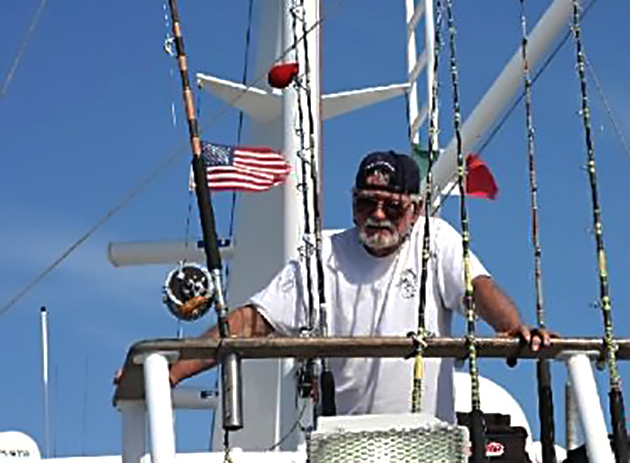 One of Marsh’s favorite bits was to look for the newbie standing at the rail trolling as the boat traveled southward toward the next bank.

“Had any bites?” Del would ask, sidling up to the angler, smiling. “Nope,” replied the unsuspecting troller.

“Seen anyone else have a bite?” he pressed.

“Nope,” only drew another question.

“Have you heard of anyone else getting a bite?” And so on, until finally leaving the confused newbie standing at the rail wondering why he was bothering to stand at the rail all alone. 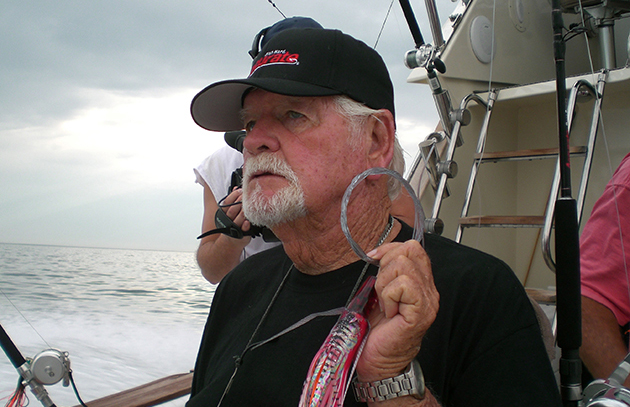 Another bit he was famous for was when big-game trolling and not getting any action he would decide it was time for a lure change. Instead of saying something to the mate or captain, he would simply hold the lure he wanted added to the spread high in the air. Nilsen often suggested that he just tell someone. Nope! He’d rather just wait.

Del was introduced to some fellows from New Zealand by his friend Steve Kaiser in Kona, Hawaii, on one of his annual trips there with Pierette to fish aboard the “Medusa” with Steve and Sandy.

During his lifetime, Del was invited to fish all around the world. He insisted that Jack and Tom Ward from Longfin Tackle go with him to New Zealand. They had all fished the Midriff Islands in the Sea of Cortez together with Captain Reyes.

“Del insisted we go there and I’m glad I did! We had three amazing trips and I have been back since then. We always had fun!” Jack reminisced.

“On one trip, we rented a motor home and cruised around North Island for three weeks. We fished the largest lake in all of New Zealand – Lake Taupo – with a very well known guide nicknamed Cookie. As usual, Del lands what the guide describes as the largest trout he had ever seen caught in the lake. He calls the local tackle store to tell them and proceeds to go to the store to weigh in the trout. When they arrive at the little Mom and Pop tackle shop, the press is there along with a crowd of locals to see the huge 12-pound trout! A reporter interviews Del while the crowd treats him like a rock star. There was a full-page spread in the local newspaper. That was typical Del! 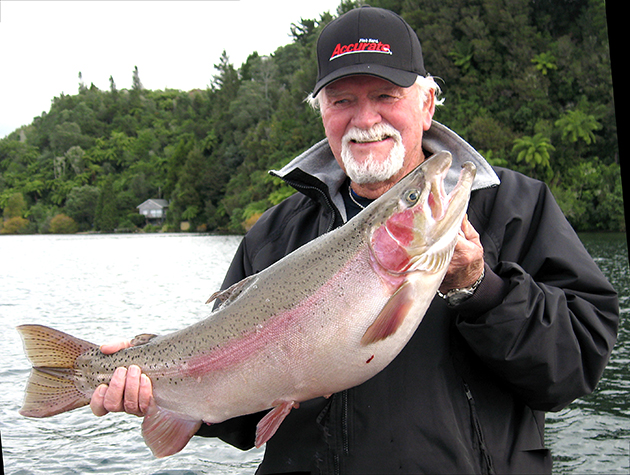 He loved to fish and was good at it. He was just one of those few really fishy guys you run into in a lifetime.” Nilsen still travels there every other January.

“His fishing accomplishments were amazing. I admired my friend Del in many ways.”

Jack and Del constantly played pranks on one another. However, the unwritten rule was that neither could nor would acknowledge the prank no matter how outrageous it was. Pranks were always masked by a good-natured smile.

As an example, Del, on one of the long-range trips, put Jack’s rubber boots in the freezer all night. Then he put them back in their proper place early the next morning. Nilson slipped on his frozen footwear and never batted an eye, wearing them all the next day.

Once, Jack decided that he had come up with the perfect prank. He purchased a cheap knock-off gold Rolex watch and had it engraved with “Del Marsh” to give to Del for his 80th birthday. He was confident that Del would take it to a jeweler to be appraised and would know that it was a fake. But he would have to wear it forever! However, Del beat him … he died three days before his 80th birthday. Jack has worn the phony Rolex on every fishing trip since.

Captain Mark Rayor offered a few of his own favorite Del stories. How Del would have a surfer take his bait out, way out, at Variety and when the surfer was at the right place, he’d jerk the line to signal him to drop his bait.

Or how Del often called the Jen Wren office in Buena Vista and demanded to speak to Jennifer, not Mark. 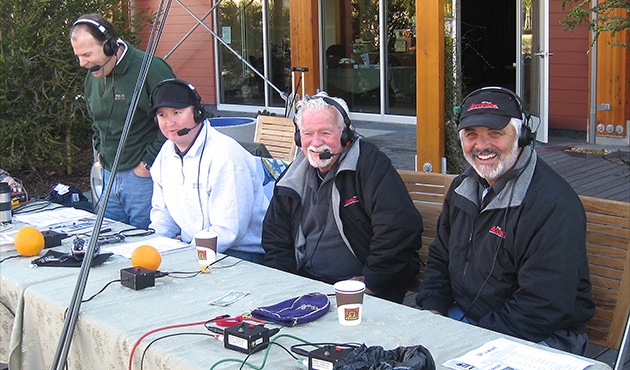 Jack and Del were often guests on Pete Gray‘s “Let’s Talk Hookup” radio program, which meant that he had to be at the station at Zero-Dark-Thirty! One morning, he arrived late in his old rusty blue Baja van and was stopped by the parking attendant as he entered the underground garage. “Hey mister, you can’t come in here! … YOU ARE TOO HIGH!” Del’s reply was “SHUT THE F**K UP, I’VE ONLY HAD ONE BEER!”

He was always welcomed on the Red Rooster or Qualifier anytime. Linda Palm‘s husband asked one time if they could just pay Del to come on the boat. 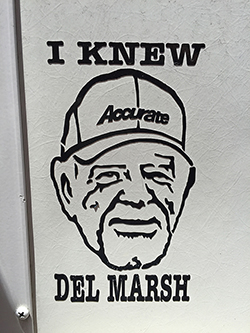 John Ireland once offered, “If you will just come down and hang out at Leonero’s bar, I will pay you to stay through the entire season. Del Marsh makes a happy bar!”

“Del will surely be missed. I know he is talking St. Peter’s ear off at the Pearly Gates right now, but I also know he won’t run out of stories before we all get there. Good fishing!” … rusty_038

The last years of his life, Marsh and Nilsen spent many hours together, traveling and fishing, and Jack was there for his last moments.

“He went very peacefully. We all knew it was coming and I was there with his family when he passed,” said Nilsen.

We had been catching yellowtail together in Baja just eight weeks before.

“We made special arrangements with the hospital and did the “Let’s Talk Hook-Up!” radio show out of his room on Saturday,” added Nilsen. “He was able to hear all the great stories from people who called in about fishing with Del.”

Tribute To Del Marsh Hour One

“I’m not going to say Del was a saint – he had an edge to him — but he was one of the three best friends in my life,” said Nilsen poignantly.

“I’ll miss his ever-present smile, and the way that he made you simply feel good just to be around him. We spent many hours at the rail together, just talking – about nothing… but those where special times for me. And I thank him for that. He was always happy to see you whenever you ran into him … anywhere. A joyful man indeed, who lived a joyful life, Del’s memory will live on with all who knew him. What a great friend to have had!” 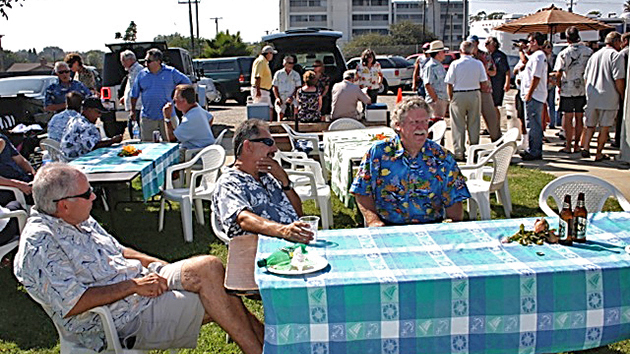 There was a fish fry gathering/memorial in celebration of Del’s life; attendees told stories of Del’s life and how he touched each of his many friends and admirers who attended. 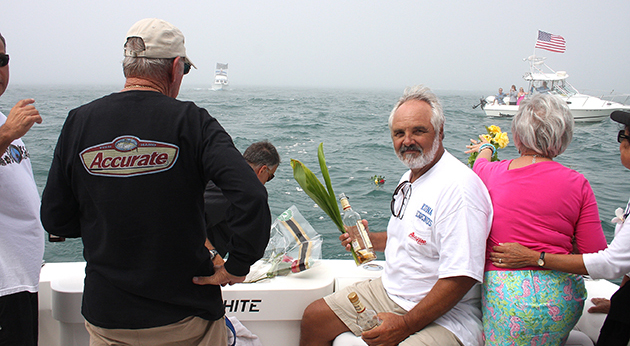 The following day, outside of Huntington Harbor, out past the oil rig, as the fog lifted, there were more than 20 boats sporting Del Marsh banners who had gathered for the spreading of a portion of the ashes. The remaining ashes were spread at Los Barriles BCS, Kona Hawaii and New Zealand. 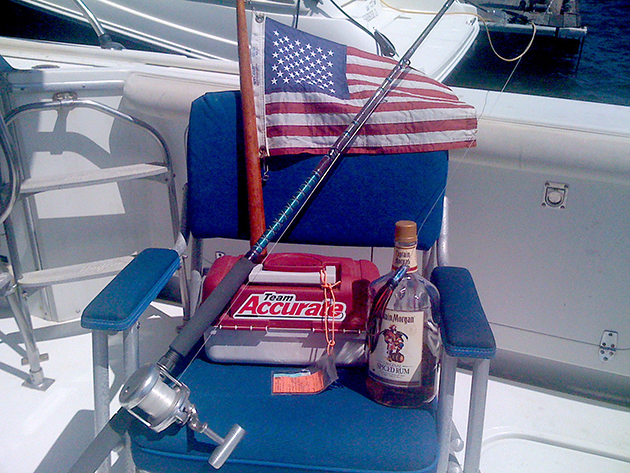 Aboard Jack’s boat, Del’s rod and reel, chair, tackle box, a bottle of Captain Morgan rum along with his fishing license — all remain as a memorial to Del. 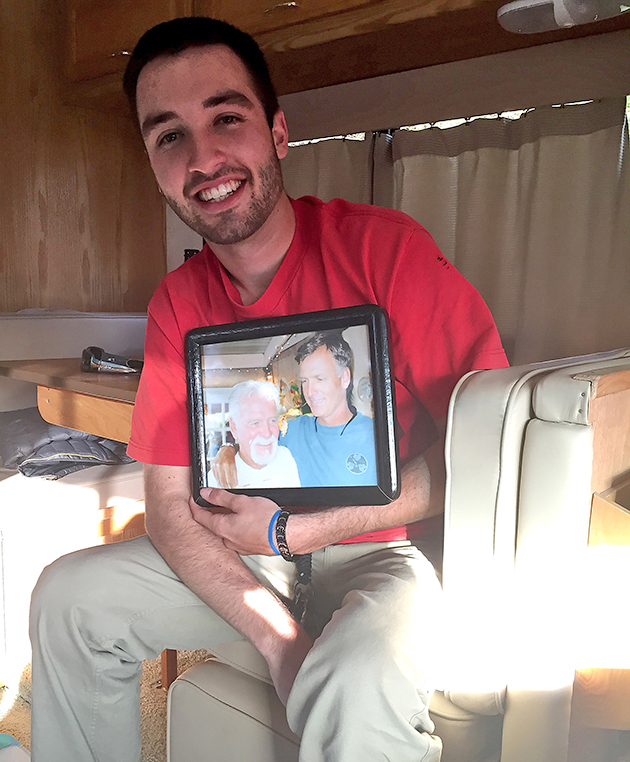 Tyler, the grandson Del never knew he had. Del’s son, Steve Marsh discovered he had a twenty-year-old son after Del’s death. Tyler, attending a community college in Santa Cruz, and his dad, Steve, hit it off immediately and plan on having a relationship for a long time … “He is a good and respectful kid with a bright future,” Steve proudly claims. 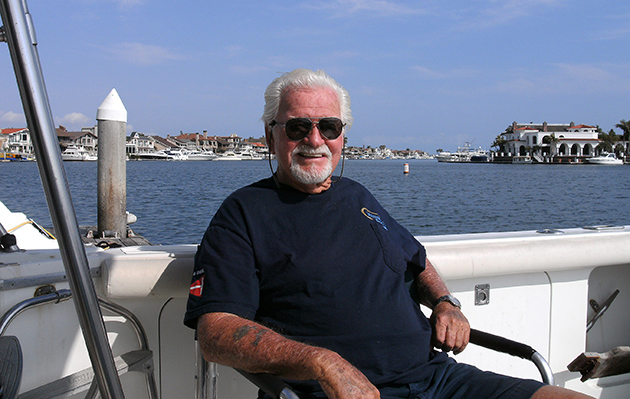 Del, less than two months prior to the end of his life – it’s hard to believe how this vibrant life could end so soon. 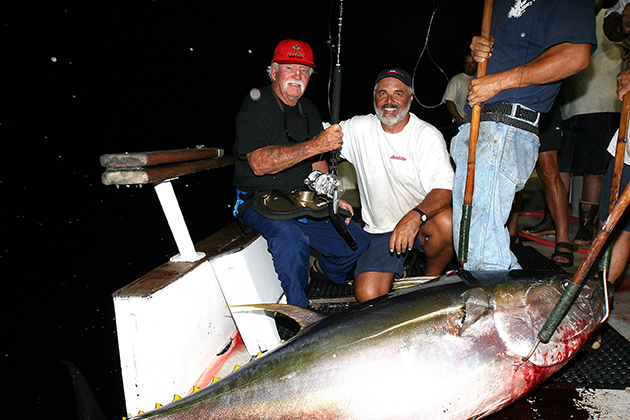 Del Marsh, who claimed they named a Race Track and Fairgrounds after him in San Diego, with his final yellowfin tuna weighing 222-pounds.