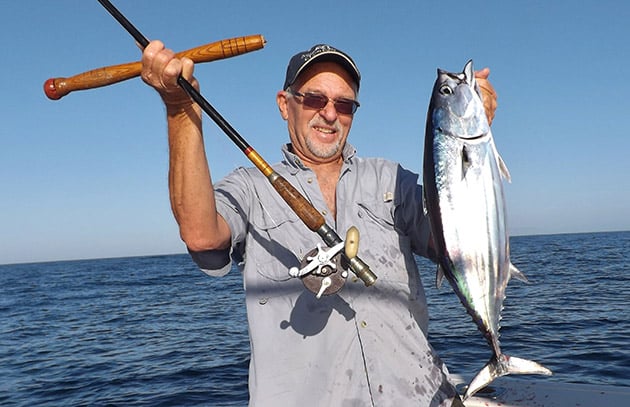 The corner of the store with my line-winding bench is a working hangout for me. It’s complete with my essential tools-of-the-trade, two winders, the necessary spools of mono and spectra and my custom made “Bimini Twister”. On the walls there is a framed map of our offshore waters, a signed Guy Harvey print and a few of my favorite pictures that are soon to be joined with some new ones from a recent, classic adventure. A fan moves the warm sultry summer air, classic rock plays on the radio and a beat-up old stool serves nicely when I want to rest a bit or indulge myself for an idle moment or two to get lost in thought. If I glance up an important part of my piscatorial history is right there; my Dad’s old black Harnell rod with a beat up Jig Master and a pitted chrome spool half full of worn and tired line. It’s had a secure spot underneath the overhead for many years and I’ve left it just as he fished it last. Just looking up brings back many memories.

Then one day in the spring I took it down. I oiled the externals and tested the sticky drag and it figured it would be good enough. I dumped the old mono and cranked on a couple hundred yards of new stuff. Then I put it back up in the rack under the overhang.

As a kid I had caught my first big halibut, my first albacore and my first yellowtail all on my Dad’s old black rod.

It made me happy to see it up there and I knew if the proper opportunity showed the gear was ready to go. And then one day it did.

This summer I’ve been fishing with Mike Harrison on his nice 25-foot Pro Line. He’s put a ton of time and money into the rig to get it fishable and it’s come a long way since he first took possession. We’ve already had some excellent outings this year and we wanted to make one more tuna trip before the focus switches over to getting him the first marlin on the boat. As my dad had never caught any of our offshore gamesters on his favorite rod I figured this trip would be the perfect time to “Catch one for Pop”. My dad was a tough guy, born and raised on the mean streets of the South Side of Chicago. He had to quit school after the eighth grade to help support his family. Fortunately he was blessed with sharp analytical skills, a strong work ethic and an abundance of mechanical ability. But he didn’t use his talents much as a young man. He spent most of his time skippering racing sailboats, chasing girls, drinking in bars, hustling in pool halls and bouncing from one dead-end job to another. And then late on one tragic night he was driving his cab at 2AM and picked up a fare that pulled a gun, demanded all his money and then as he was getting out of the cab turned, pointed the gun and shot my dad in the face at nearly point-blank range.

Luckily (if such things can be) it was a small caliber gun and the asshole was a bad shot. But the slug did break his jaw on the right side then ricocheted off the left side and somehow lodged deep in his neck, pressed tight to the jugular vein, an inoperable location for the surgeons of the 40’s. They told him it was a miracle he survived.

During his long recovery he had plenty of time to think about where the rest of his life was headed. Realizing it was time for a change of direction he recalled how another fare, after a long drive and some worthy conversation, had commented “You’re far too smart to be doing this and if you get the chance stop by my business and let’s talk some more”. The man gave him a business card which my Dad had saved and when he got out of the hospital he followed up on the offer.

As it turned out it was a fateful decision. The guy was an owner of the Diamond T Truck Company headquartered in Chicago and they had just invested in some new-fangled device called a “computer”. Back then the concept was brand new and the hardware took up a whole room but the company was growing fast and they needed the tools and personnel to further their expansion. My Dad was hired shortly after that first meeting to help with the setup of their installation, to learn programming and to interface with some company called IBM.

He spent the rest of his career working with computers; both as a programmer and a systems analyst. He always earned a comfortable living and it afforded us the luxury of a family boat and the time to use it.

We always fished together and he enjoyed it; but it was obvious that I loved it.

He did everything possible to encourage me which included catching most of what was hooked on “That old black rod”.

So in my handful of outfits for our mid-September trip was that old black rod. No fancy rigging…just a generic #1 hook tied on the end of some 25-pound mono. I didn’t even clip the tag end short as he never worried much about those kinds of details. Down below Catalina about 10 miles or so we dropped in the jigs (marauders rigged on wire!!!) and I got in the binos and started looking. It wasn’t long before we got on a small spot of birds and breaking fish, threw some chum, and watched the tuna come roaring up the chum line. Mike and I dropped baits back, he got bent and I got clipped, probably a wahoo. The real fun started with the next cast. The old black rod is bent on a fish… for the first time in over 30 years!!!

I grabbed the black rod, pinned on a bait, threw a few more for chum and watched the corner explode with white water; they were on us. My sardine hit the water and instantly disappeared in a boil. I felt a twinge of apprehension just before clicking the 500 into gear because I knew the drag was sticky but the fast spinning spool quickly smoothed it out. I kept a gentle bend in the rod with fear of breakage in my thoughts and then “CRACK!!!” It wasn’t the rod but the wooden butt where it fit into the reel seat. Fortunately I had a good hold on the foregrip with my left hand and caught the butt with my right as it headed over the side. Butt-less, the rest of the fight was even more memorable. The first fish turned out to be one of the skipjack that have invaded the coast; lots of fun but not the tuna I was hoping for. Undeterred, I dug out some zip-ties and some duct tape and enacted an emergency repair.

I laid the butt under the reel seat, zipped up three ties to hold it in place and then got busy with the black tape. A few layers in multiple directions made for an ugly connection but it felt workable so I re-tied my hook and flipped out another bait.

I could see the brown back in the white water of the next boil as my line came tight to the first tuna for the old rod. Keeping the angle low and being aware of the broken butt made for a less than carefree battle but regardless it was still a blast.

It had been nearly half a century since I had felt the soft bend of that black rod in my hands. And it was certainly a different feel than one of my Grafighters with a Trinidad loaded with super sensitive Power Pro. But ultimately landing a yellowfin, a fish he had never caught, on my Dad’s favorite rod, thinking all the while “This one’s for you Pop” was a heartfelt thrill in a class of its own. 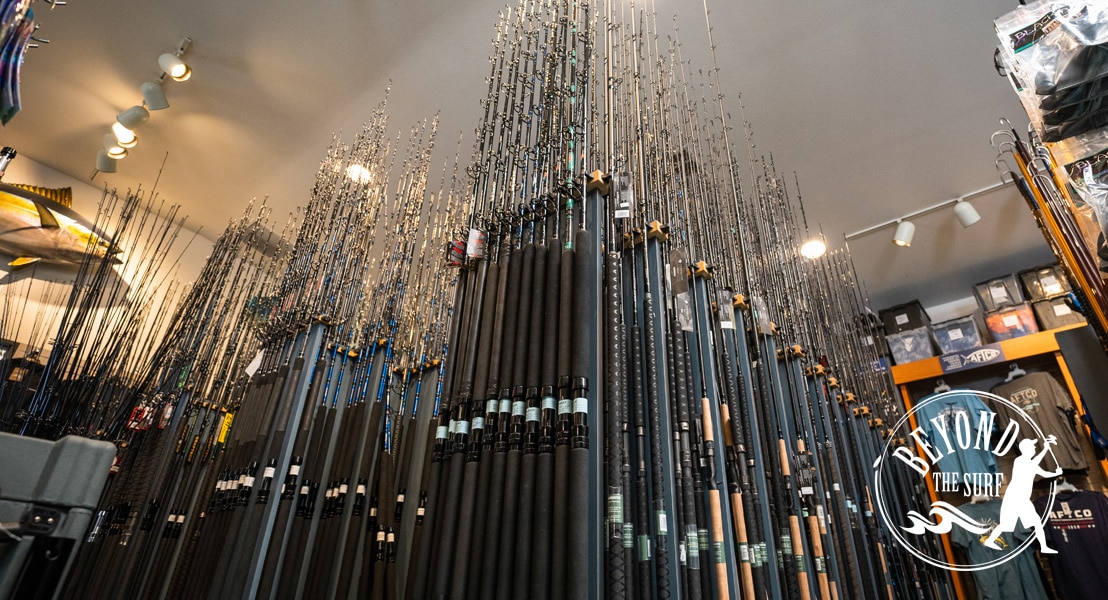