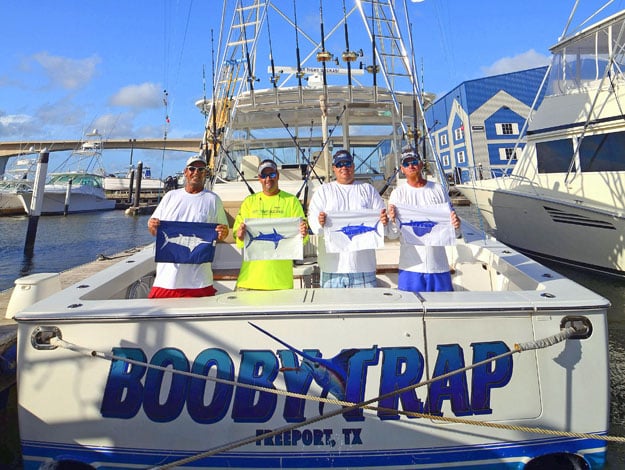 On July 25, 2012, Capt. Brett Holden and his team on the 52-foot Viking Booby Trap made history yet again. In just four hours of fishing in the Gulf of Mexico, the crew managed to catch four species of billfish to log what is known throughout the sport as a Super Slam. To land four species of billfish in a period of a 24 hours is extremely impressive, but to do it in four hours is just insane.

Capt. Jeff Wilson was on the wire for the most recent super slam with Capt. Shayne Ellis manning the camera.

Smooth Finish landed a Texas Super Slam in 2011 fishing the Texas Legends Billfish Tournament. But, they’re super slam did not include a swordfish. Smooth Finish caught a blue marlin, a white marlin, a sailfish and a spearfish.

On both of the Booby Trap’s super slams, the crew caught swordfish, which they specialize in.

“This is the best crew I have ever had on the Booby Trap and I think the world of them,” Holden said. “It’s a hard-working, first-class crew.”

This most recent slam also marked the Booby Trap’s 110th swordfish for the 2012 season.

Booby Trap is rewriting the book on catching swordfish during the day, and setting all sorts of records in the process.

“We were going on a five-day trip with the goal of catching a super slam,” Holden said. “We did it in our first run in just four hours. I didn’t expect it to happen that easy. It’s pretty ridiculous. Our goal is to set bars, and we’re getting that done.”