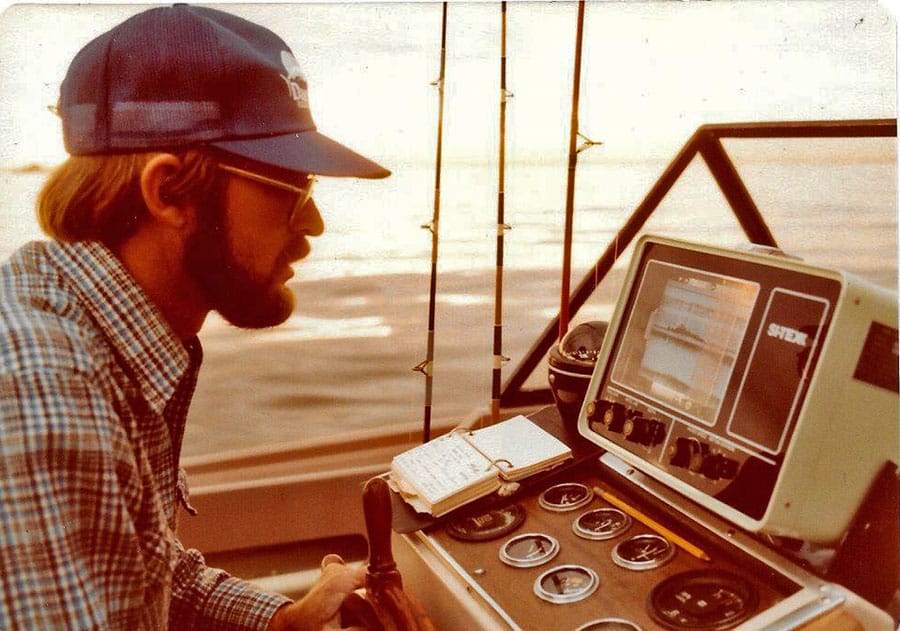 Sunrise on the Sunset by Mark Wisch

Just after starting down the bay towards the harbor mouth we passed another boat already coming in. In passing they said “Forget about it, too rough!!!” and of course we waved and said “Thanks” and kept going. Turns out they were right.

A big southeast wind was blowing farther offshore and had the harbor mouth a mess. Lots of southeast lump was mixing with the residual swell from a post-frontal northwest clearing wind. It was ugly. But the wind wasn’t really with it just yet so we crawled out making minimal speed with the enclosure down and the spray flying in the bright morning sun. We got out to the leading edge of the big wind just about the time the GPS was winding down to 000 as we neared the spot.

I’ve been catching fish off the Sunset since I was a kid riding the half-day boats that used to run from Seal Beach Pier. I had no idea at the time what was there, but I knew enough to roughly triangulate the area and mark it on an old chart because it was good fishing. It was my first crude attempt at shore bearings but they weren’t tight enough and I could never find the spot again. But then I studied hard and learned my craft. Ultimately I filled many books and notepads with the sketches and lineups about how to find and fish the spots along the coast.

But it wasn’t until one day in the late 70’s we drove straight to the famed Sunset. I had been fishing marlin a lot on the Seaway with the late Mike Callan and Capt. Bill Lescher. Although he was a school principal at the time, Bill previously ran sport boats from Seal Beach/Long Beach and had extensive local knowledge of the area.

I was desperate to learn and he slowly started to share as we fished locally aboard my beloved 18’ skiff Jig Time. At first most of what we fished were the spots I already knew. And then slowly, over time, Bill started to open up with the really good stuff.

The first time we headed to the Sunset caught me by surprise. We had been fishing some of the other spots off Huntington and were on the way in when Bill said “Let’s check one more”. He pointed me in the general direction and as we started getting closer showed me the specific lineups for the shore bearings we would use to get on the spot. Today it’s different. We just punch in the numbers in the GPS and drive straight there, meter the spot, kick the anchor over and start fishing. But back then it wasn’t like that at all. GPS wasn’t even a concept yet and LORAN was just coming out but way too expensive for me.

So we did it “Old School”, by lining up two objects to make a line in one direction and then two more to make a line from another direction. Where they intersect is your spot. And if you’re good at finding prominent objects with sufficient distance between them you’ll have a good set of bearings that are fast moving and very accurate. I still use many of my old bearings even today.

That first day on the wreck delivered just like all the stories I had heard.

The sand bass were stacked from top to bottom, they really wanted to bite and we just walloped them. The spawn was on and back then the sheer volume of bass on the flats was staggering and the combination of the two made for the crazy good summertime fun. And it was like that for many years.

Today, sadly, it’s a travesty of justice our fisheries managers allowed the bass population to be depleted to the pathetic levels that remain. Irrespective of the declining fish stocks in the area the famous wreck no longer holds much at all as it has continued to disintegrate. Even when Bill first showed me the spot it was very small; just a few stark wooden ribs and remnant planking showing above the sand. But time and tide are harsh masters and their combined and corrosive effects over the many years have continued to take a heavy toll.

On that last trip, even though the weather was bad, I circled it up multiple times and found virtually no fish marks and the barest scratch of hard bottom to stop on. I have to admit to a twinge of sadness over the slow loss of a friend as I’ve watched the spot degrade through the years. But we still made one quick drift for nothing just because we were there before heading in ahead of a building southeast gale.

Two weeks later we checked it again with much the same result.

It was flat calm so really easy to look at the meter marks and indeed the remnants of the wreck are virtually gone. And again we made a quick drift for just one good tug on a jig that quickly fell off so we were out of there in search of better opportunity.

But it turned out to be a great day. I had the chance to fish some new outfits from Daiwa that worked well. I threw the iron for a while just because I love the feeling of a jig stick in my hands. And for the actual fishing…all day I did it “Old School”. I fished the plastic with a strip of squid and I fished a “Sculpin Catcher”, both deadly effective in the winter over heavy structure.

A “Sculpin Catcher” (SC) is the essence of simplicity and yet a highly efficient tool. Just get a cheap, plain lead torpedo sinker (1.5, 2 or 2.5 ounces for local fishing) and a small open-eye siwash hook. Then carefully shape the eye of the hook as you mate it to the sinker. Then bait it with a chunk or preferably a nicely shaped strip of squid and then get it down to the bottom…close to the bottom. 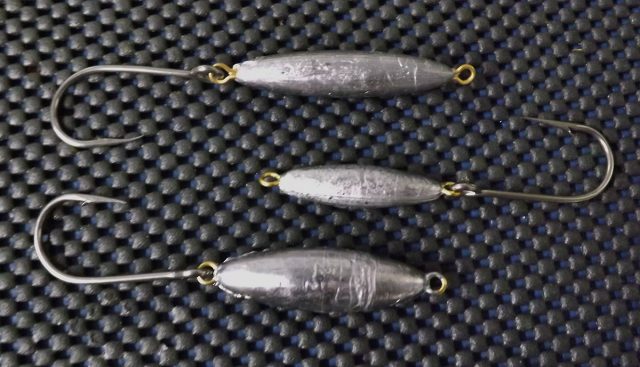 “Sculpin Catchers” The top and bottom ones show the hook properly tweaked…the point rolled in and the shank with a bit of a curve…much more snag free!!!

During the winter most of what we’re catching is in, on or very near the bottom. When you’re set up on heavy structure that means there are lots of hang-ups to get stuck on so it is inevitable. One of the beauties of an SC, along with the ready availability and low cost, is the ability to shake them off when you get stuck. Another common terminal rig is a lead head and they also work just fine with one major distinction. The SC has the flexible connection between the hook and the sinker…and it makes all the difference. If you’re stuck just pull up gently/slack off then repeat as necessary. The sinker flopping back and forth makes for a far higher percentage of successful retrievals.

In the afternoon we moved in to one of my favorite calico spots to see if they wanted to bite. The big swell of the previous days had taken a toll on conditions on the hard bottom spot in only 8-fathoms but there were still some around. The bass were biting ok, along with a few more sculpin and even a big batray I could have done without. But it was a great way to end the day…catching calicos on the plastic with a strip of squid; an old school method in a new school world. 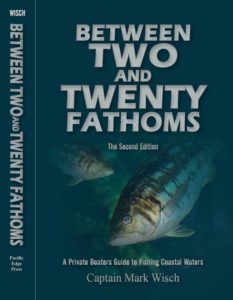 If you want to learn more about local fishing get a copy of Mark’s book “Between Two and Twenty Fathoms”.

It’s a private boaters guide to fishing coastal waters and will teach you exactly where and how to fish like the pros. Either stop by the Pacific Edge store at 5042 Edinger Ave in Huntington Beach or order online at PacificEdgeTackle.com.