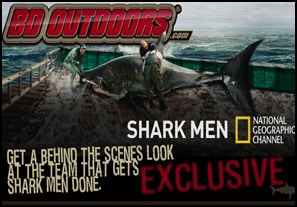 Sharkmen Exclusive Behind The Scenes Chris Fischer gave BD Outdoors exclusive access to his team of expert Great White Shark anglers and scientists to get a glimpse of what it takes to put on the hit television series “Shark Men,” which airs on the National Geographic Channel. Because a true circle hook did not exist in the needed size, the circle hooks the team originally used were made from a large Mustad Shark Hook bent into a circle shape. Unfortunately, the modifications made to the hooks were weakening them, causing the hooks to break. Chris contacted Mustad, who built a series of giant circle hooks able to withstand the massive force of these giant sharks… Problem solved. In “Shark Men,” the crew aims to educate the viewer on the fragile status of the great white shark and the importance of understanding these creatures, rather than painting them as some monster of the deep like most shows do. The ship’s engineer, Denny Wagner, explains to a group of writers how the crew uses the Mustad circle hooks to land giant white sharks. Since Mustad began building the true circle hooks, there has not been a failure. The hooks are now available to the public in size 27/0 and 31/0 as part of Mustad’s Demon Perfect Range. Capt. Brett McBride came up with the system to land these big sharks using a large circle hook and a series of buoys attached to the line with clips. The idea is to catch the fish quickly and impart as little damage as possible so the scientists can place a tag on the fish, collect their data and release the animal. It takes an entire crew to conduct the research needed to understand white sharks and where they roam. Each person has an important job on “OCEAN” and the show’s success could never have happened without such a dedicated team. To learn more about the other research programs Fischer and his team are working on, visit www.ocearch.org. Helm Of The OCEAN Mothership “OCEAN” was originally built to fish for king crab in the Bering Sea. The helm, situated about three stories above the surface, houses all of the navigation equipment needed to find the fishing grounds and a clear view of the action on deck. There are no tackle shops when you’re hundreds of miles away from civilization on a remote stretch of water. This shot shows just a small portion of the ship’s tackle room, which holds a range of gear from ultra-light stuff to the 130-pound big boys. Chris Fischer and captains Brett McBride and Jody Whitworth are sportfishermen first and shark researchers second. Their knowledge of boat handling, tackle and how to fight fish made all of this possible. Dr. Michael Domeier could not place the tags he uses on these sharks if the boys didn’t first catch them. Capt. Brett McBride has logged thousands of hours working with Chris Fischer and the rest of the “Shark Men” crew. Each adventure brings a new set of challenges and that’s what drives him. Thanks to the equipment on “OCEAN” and the knowledge of the “Shark Men” team, they were able to become the first group to ever catch, tag and study white sharks weighing more than 3,000 pounds.

Cow Skull Found In Mexico Aboard The OCEAN The crew on “OCEAN” found this skull while shooting an episode in Mexico. One of the guys decided to hang it on the mast of the sodium lights and give it a giant shark hook for a little bling. It makes a nice mascot. Dealing with sharks, big or small, is not something to take lightly. Whether the animals mean to or not, they can still cause injury so the team must be super careful when handling the animals. Be a part of the team. You can purchase exclusive “OCEAN” clothing through Montauk Tackle Co. at www.montauktackle.com. The high-performance shirts fish great and a portion of the proceeds from the sale of the shirts goes to supporting this important research.