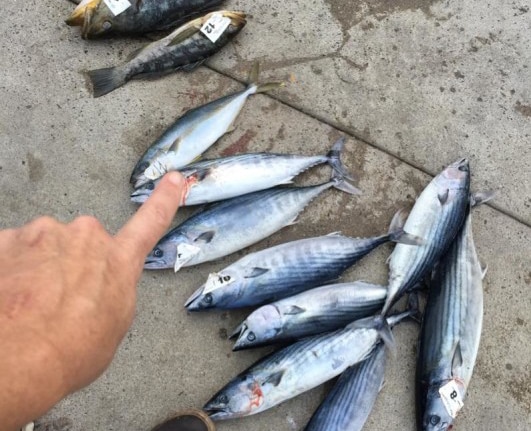 Five Star Fish Processing posted the above picture yesterday on Facebook.  Alongside this picture they wrote:

Remember Five Star does not accept Yellowtail or Tuna under 10 Lbs. Please spread the word. Catch and release guys. For one- they are babies, for two- your yield to that fish is 10% max…. Let those things grow so we can have a better season next year and years to come. Please respect my morals and cut them off!

One commenter said something about they can’t legally impose their morals on other people.  They’re not discriminating on customers based on race/religion/gender etc., so they absolutely have the right to have this company policy.  I don’t know if the policy is motivated from a marketing standpoint, practical reasons, or truly a belief…it doesn’t matter.  They absolutely have the right to the policy.

What I do want to address is the notion of whether or not to keep “rat yellows.” So from a legal perspective, you are allowed to keep 5 fish under 24″ in length (and 5 over for 10 fish total).  The question is whether or not you should.

From a pragmatic perspective, for both 5 Star and the angler paying to get their fish processed, it’s really not worth anyone’s time.  If you are going to keep a “rat” yellow, have them slab it (filet, but leaving the skin on) on the boat.  Grill ’em up.  A simple drizzle of olive oil, salt and pepper and you are good to go. Smoking is another great option.  At least honor the fish and eat it.  I’m not going to try and tell you I’ve never taken a rat.  We all have.

To their other point though, that they are babies and we should leave them to grow for the sustainability of the fishery.  I’m not going to pretend I’m a fisheries scientist, but it sure seems like there is a ton of fish around…at least for the moment.  Hard to say if we’re just seeing a lot more of the biomass now locally due to El Nino.  A lot of the fish being caught seem to be of this smaller variety, so at least intuitively it would seem to be a good idea to throw the rats back.

There is a commercial fishery for yellowtail.  They are tracked by Seafood Watch and for what we do, catching yellowtail by hook and line in California or Mexico, they are rated as a Best Choice in terms of sustainability.

That said, even in their own whitepaper about the species, they admit that “California yellowtail does not have a stock assessment, FMP, or references points.”  So if you don’t have a benchmark of a healthy fishery, how do you judge if the fishery is healthy now? So it really does come down to a matter of choice.  I always tell people, if you are just in it for the meat, go to a grocery store. I’m a sport angler.  There’s no glory in keeping a rat.  That said, we should respect other people’s choices.  That goes for the crew members too that sometimes pressure people to keep them for the counts.  What do you think?  Whatever you do, please do think about it and make a conscious decision.