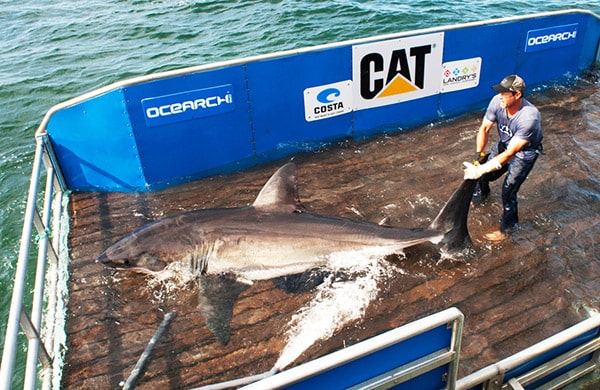 Chis Fischer and the crew of the Ocearch continue their mission to tag sharks, mostly great whites, throughout their range. At this moment, they are scouring the waters of Cape Cod, Massachusetts, but the shark sightings have been few. The crew had several sightings in the first few weeks of the expedition, but none of them wanted to take the bait. Then on day 16, what they believe to be a new group of sharks moved into the area and one of them took the bait. The first to take the bait was a 12 foot 7 inch, 1400-pound female that is now named “Betsy”. Fans of Caterpillar engines chose the name, as “Betsy” was the name given to their first prototype diesel engine.

Betsy the shark was brought into the cradle alongside the Ocearch vessel and within 15 minutes time, scientists performed twelve different procedures, including attaching two types of tags. The first is a SPOT tag and the second an accelerometer tag. This second type is special because it is going to record every fine scale movement of the shark for two weeks. This will be the longest recording of a sharks movements and then the tag will release itself and float up to be gathered by Dr. Nick Whitney. The Spot tag will continue to track the shark’s location and allow scientist and the public to see the whereabouts of Betsy. You can log on to the Ocearch website and see this and other shark’s gps location. Researchers also took blood samples to measure many factors, including the stress level of the shark during the procedures. Everyone is happy to see that the stress levels are very low from a chemical standpoint. Fresh seawater is continually pumped across the gills of the shark while it is on the platform. They were even able to perform an ultrasound on the shark and hope to get insight as to where this immature female shark will go. Betsy swam off the lift with energy and is already pinging her signal to the Global Shark Tracker.