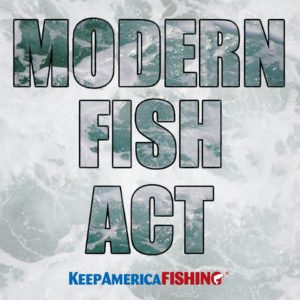 Over 11 million Americans enjoy saltwater recreational fishing. The sport contributes $70 billion to the nation’s economy annually and supports 455,000 American jobs. And yet, when it comes to federal management, our sport is frequently overlooked.

The current law, known as the Magnuson-Stevens Act, has never properly addressed the importance of recreational fishing and this has led to shortened or even cancelled seasons, reduced bag limits, and unnecessary restrictions. Management strategies are in desperate need of an update and more emphasis needs to be put on recreational fishing.

Fortunately, a solution is on the horizon. On April 6, 2017, the Modernizing Recreational Fisheries Management Act, or the Modern Fish Act for short, was introduced in the House of Representatives as HR 2023. The Modern Fish Act is designed to address federal saltwater management issues by adapting the federal system that has historically focused on commercial fishing to now meet the needs of the nation’s saltwater anglers. The Modern Fish Act will provide federal managers with the tools and data needed to appropriately manage recreational fishing, rather than continuing to manage recreational fishing the same as commercial fishing, much like the proverbial square peg and the round hole.

If passed, the Modern Fish Act will improve access to America’s federal waters and promote conservation of our natural marine resources.  Simply put, that means more and better fishing.

FAQ’s Of The Modern Fish Act

What does the Modern Fish Act do for me?

If you fish in federally-managed saltwater, odds are you’ve been frustrated by shortened seasons, reduced bag limits, and unwarranted restrictions.  From summer flounder in New Jersey to red snapper in the Gulf of Mexico, anglers have been hampered by out-of-date data, quotas, and in some cases, questionable management strategies.

The Modern Fish Act is designed to address these issues by creating a comprehensive package of regulations specifically aimed at adapting the federal system that has historically focused on commercial fishing to now meet the needs of the nation’s 11 million saltwater anglers.

Since 1976, the Magnuson-Stevens Act, or MSA, has been the primary statute governing the nation’s marine fisheries in federal waters, which in most states are 3-200 miles offshore. The MSA has made solid progress in ending overfishing, rebuilding depleted fish stocks, protecting essential fish habitat and a variety of other improvements to the nation’s marine resources.

What’s wrong with the MSA?

The MSA is primarily focused on commercial fishing. The resulting management system is based on commercial fisheries management concepts like “maximum sustainable yield” and poundage-based “annual catch limits” that are monitored in real time. Given the nature of recreational fishing, which is based more on the experience than maximizing harvest, this type of management is generally not feasible or appropriate.

Why is recreational fishing important?

Saltwater recreational fishing contributes $70 billion annually to the nation’s economy and supports 455,000 jobs in every corner of the country – not just states with access to saltwater.

Who supports the Modern Fish Act?

Keep America Fishing gives you – the public – a place to learn about the issues we’re facing, unite our efforts as a community, and present a strong voice. When millions of Americans come together and ask our political leaders to vote in favor of recreational fishing, they will listen.