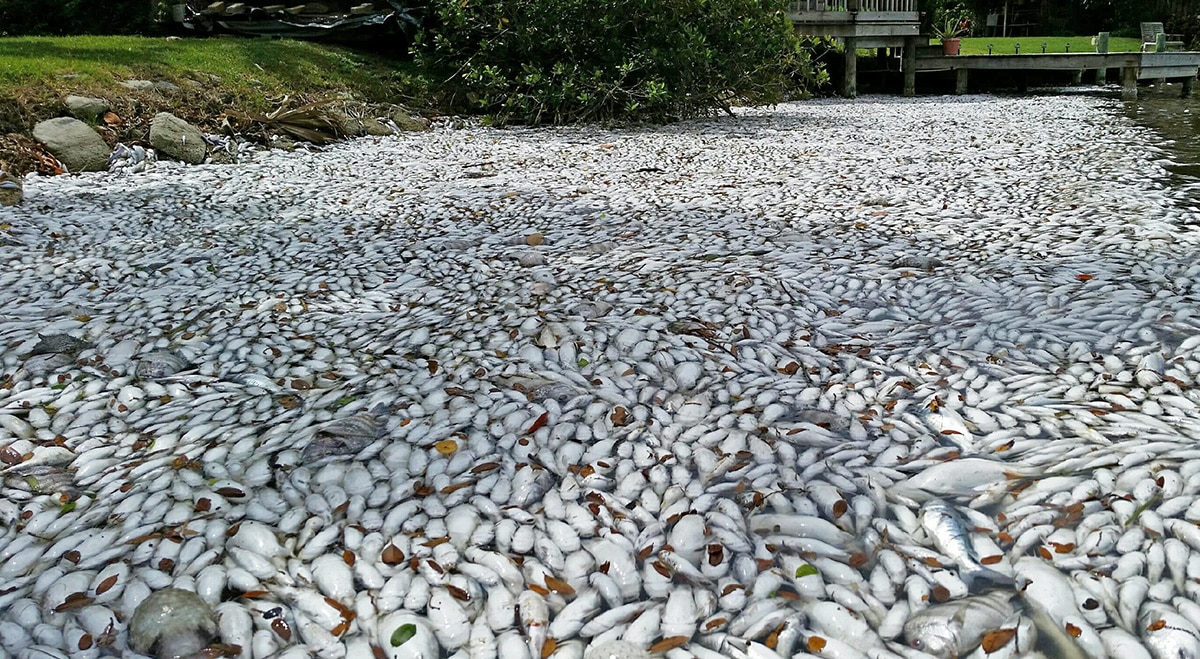 I’ve heard it described many ways, the massive degradation of the Indian River Lagoon, and there are many fingers pointing in all directions.  Each level of blame is probably true to various extents and we all share some part in the problem, either directly or indirectly.

The most apt description I’ve heard of the problem is “death by a thousand cuts”.

Meaning it is not just one factor or event that has triggered the problem, but more likely the culmination of many smaller man-made and natural factors that have had this storm brewing for decades.

The Indian River Lagoon is a diverse inland, saltwater waterway with an incredible diversity of life and beauty. It stretches from south of Daytona Beach to North of Jupiter, Florida. It is the focus of countless outdoor endeavors for pleasure and business.  The Indian River Lagoon is the heart of a multi-million dollar tourist industry and the livelihood for countless guides, tour operators and commercial fishermen.

Emotions are running high and algae blooms and dead fish are triggers for public action.

The Cause is Complicated

As I mentioned before, there are many likely causes and the jury is still out on just what factor has culminated in this latest catastrophe.  A bloom of brown algae has fouled the often crystal clear waters of this Florida treasure and is probably the driving force in the most recent round of fish kills that have been happening for about four days. There have been other blooms as well in the past of various types of algae, but the sudden growth of algae is only a symptom of the underlying issues.

It is widely perceived and often argued that storm water runoff, septic tank seepage, residential and commercial fertilizer usage and the direct flow of treated waste water all make their way into the waters of the Indian River’s delicate estuarine system.  This creates a high nutrient load, which in combination with weather factors can cause the algal blooms.

These blooms have a wide variety of effects, but one of the most direct and detrimental is the blocking of sunlight to the native seagrass beds that are one of the key factors to a healthy natural system.  A large percentage of the seagrass beds could be killed off if the bloom continues.  The negative effect will trickle down through the ecosystem for years to come.

Another more obvious effect is the killing of thousands of fish in the Banana River and Cocoa Beach areas.  The immediate cause of death of the recent fish kill has yet to be confirmed, but drops in oxygen levels associated to the algae blooms are often to blame in these kills.

A wide variety of species are being found dead, including many of the trophy gamefish that sportsman love and have worked so hard to preserve.

It is heartbreaking to see the carnage for anyone who loves the outdoors, but especially for fishermen who witness the circle of life so intimately.

We all have a part to play in forcing a change to save the Indian River Lagoon system.  The Lagoon has been under a slow assault for decades.  Unfortunately we are not the only part of the Lagoon suffering a catastrophe at the moment.  For weeks, a flood of billions (yes with a B) of gallons per day of black/brown nutrient laden freshwater has been released from Lake Okeechobee in South Florida.  This unnatural release of freshwater has flip-flopped two diverse estuaries, the St. Lucie River to the east and the Caloosahatchee River to the west. In fact the plume of polluted water looks like an oil spill as it mushrooms into the Atlantic and Gulf. The freshwater release is done to lower the lake level to preserve the integrity of an earthen dam, but the overall issue is man’s tinkering of Florida’s natural plumbing for the sake of sugar farms and development.

The worst part is that all of these drastic problems have no quick fix.

The only bright side to either issue is that the people who work and play on or around the river are pissed.  The sleepy giant of awareness has awakened and people are demanding the implementation of solutions that have been kicked around for many years, but not acted upon.  Unfortunately it takes dead, stinking fish in our face to trigger action by the people.  The key is to maintain that fervor after the buzzards and nature have cleaned up our mess.

It may seem overwhelming and too big for individuals to fix, but we must all work hard and sacrifice some free time to save the Indian River Lagoon.  The social media storm is raging and many ideas are bouncing around as to what is the best fix.

Capt. Alex Gorichky of Local Line Charters has been working hard to give the Lagoon a voice on a variety of important issues.  As a local native and fishing guide, he sees and feels the effect up close.  “I’ve been taking reporters out to see the damage first hand.  I’ve seen enough big breeder redfish, black drum and trophy trout to make a grown man break down and cry.  It really hurts because I feel this is a mass extinction event over a thirty mile stretch of Lagoon.”  “We are having a rally in Brevard County this weekend for anyone who can come out and lend your voice. The river needs our help quick.” added Capt. Alex.

I will follow up this article with updates and advice on what individuals can do to help make a meaningful contribution to the fix.  It will be a multi-faceted approach including hounding politicians, educating the public and changing our own personal habits in reference to our own effect on the Indian River Lagoon.

Stay tuned as there will be more updates to come.

Together we should be able to affect change and hopefully save the Lagoon.  Divided, we may continue to loose this irreplaceable treasure.

Here are some great articles and links to help us learn about the problems and solutions.