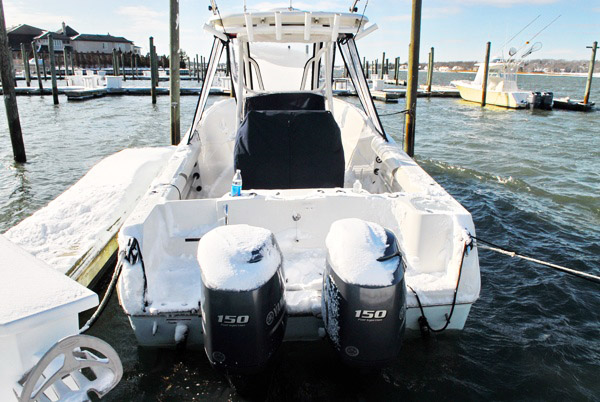 It was January 2, and a snowstorm had just passed through central New Jersey. The temperatures were in the teens, and the wind was blowing so the wind chill was pushing zero. The marina was empty except for four boats still floating in their slips, and all four just happened to be Yamaha-powered center consoles in the 24-to-32-foot range. Without doubt, all of these were hardcore recreational fishing boats. From the footprints in the snow you could see that three of the owners had already been there to shovel the decks, the fourth would likely be along shortly. What would possess someone to leave a boat in the water this late in the year exposed to the weather? If you’re a diehard saltwater fisherman, you already know the answer to that question. Almost anywhere you go around the country, the fishing never really stops for the winter. The only thing lacking is the desire to fish through the cold weather by the less dedicated. In the more northern states, the action switches over to hard water fishing—ice fishing for the uninitiated. Along the mid-Atlantic coast, there are plenty of fish to pursue depending on your latitude and attitude. Off the New Jersey coast, there are artificial reefs, wrecks and other bottom structure frequented by codfish, ling, whiting and blackfish – just waiting for someone to come along and drop a hook baited with clam or crab to the bottom. That kind of fishing requires a boat, hence the four boats in the marina obviously owned by truly hardcore fishermen. All they are waiting for is a break in the weather that will allow them to fire up the boat and go fishing, even during the coldest months of the year.

This scenario is repeated across large swaths of the country where winter sets in, and that includes rivers and lakes as long as they don’t freeze over. The bottom line is you never know when a weather window might pop up with a few mild, calm days offering the opportunity to get out on the water. All it takes is the desire, the proper clothing and a boat that is ready, willing and able to go.

David Meeler, Yamaha Outboard’s Marine Product Information Manager, is one of those diehard fishermen for whom the season never ends. He keeps his boat on a trailer near a large lake in northern Georgia that gets its share of cold winter days. But when the forecast presents a window of opportunity, he is on his way to the lake to go fishing. He keeps his boat prepared for these occasions and you can, too, whether you fish in freshwater or salt.

“Whether your boat is on a trailer, lift or kept in a slip at a marina, if you want to be able to fish through the winter you have to pay special attention to the two key factors required by any internal combustion engine—fuel and spark,”

said Meeler. “If the fuel is fouled by water created by condensation, or the ethanol in the fuel breaks down because the boat is not getting used frequently enough, chances are you’re not going anywhere. Winter weather can accelerate the potential for both problems. Extremes of cold followed by short windows of warmer weather cause increased condensation, and long periods between uses give the ethanol in the gasoline the opportunity to destabilize the gas. When it breaks down, it can gum up your filters,” he continued. “To prevent these problems, start by installing new fuel/water separators and filters before the cold weather sets in, and keep extras aboard in case you experience any related problems on the water.

Most important of all is to add fuel stabilizer to the tank every time you fuel up and use the good stuff like Yamalube® Fuel Stabilizer and Conditioner Plus. Properly used, it keeps your fuel fresh for up to a year or more. When you get a weather window and want to get out and catch some fish, it would be a shame to lose the opportunity to fouled fuel in your tank.” With fuel taken care of, you also have to be mindful of the other side of the combustion equation, your electrical system.

It is absolutely critical to have batteries that are in top condition and charged to start your engine(s) in cold weather. A battery loses 30 percent of its cranking power at 32 degrees, even more when it’s colder. The anglers that fish year round in New Jersey are often firing up their engines in temperatures in the teens in winter and that strains the batteries. Remember, some outboards may require up to 100 amps to turn them over and get them to fire. The down time between uses in the winter can stretch from days to weeks so a “smart” marine battery charger that will maintain the charge at full between outings and shut off when the batteries are topped off is worth its weight in gold. A smart charger constantly reads the charge level on the boat’s batteries and trickles power to them only as needed so it will not overcharge them. If you do not have a smart onboard charger, Meeler recommends you disconnect the power wire from the negative terminal of the battery so there can be no current drained from the battery between uses.

Keep in mind, however, that batteries don’t need a draw to make them lose their charge… they’ll discharge over time all by themselves.

If you keep your boat in a slip, a charger is not optional. The batteries will be discharged every time the bilge pump kicks on and that can degrade the charge significantly. A discharged battery and a moored boat relying on bilge pumps is a dangerous combination.

Boats on trailers or lifts should have the engines flushed with clean, fresh water after each use and the engines dropped completely down to negative tilt position so all the water can drain out of the lower unit should temperatures drop to below freezing. Boats kept in slips in saltwater should still be flushed using the built-in flush attachment, usually located on the side just below the cowling. Connect a hose of clean, fresh water and simply let the full-on water pressure do the flushing – no need to start your engine.

If you keep your boat in the water, there are additional considerations. First and foremost, is your boat in an area where there is a chance of the water freezing around it? In coastal areas, boats kept in slips near the ocean with a significant tidal fluctuation rarely have that concern, but the further away from the ocean and the further north your location, the greater the chance of a hard freeze becomes if a protracted cold spell sets in.

Another consideration is snow, which should be removed from the boat quickly. Snow build-up can cause ice to block a boat’s scuppers and, in extreme cases, can build up to the point where the sheer weight can create flotation problems. Just be sure to use a plastic shovel so you don’t scratch the gelcoat.

If you’re one of the diehards, or would like to join them this winter, you can get out at a moment’s notice if you follow this simple advice. And always be sure to have a full complement of safety equipment aboard when cold weather boating.