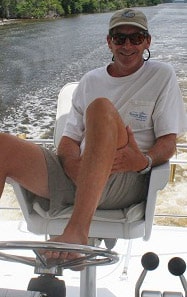 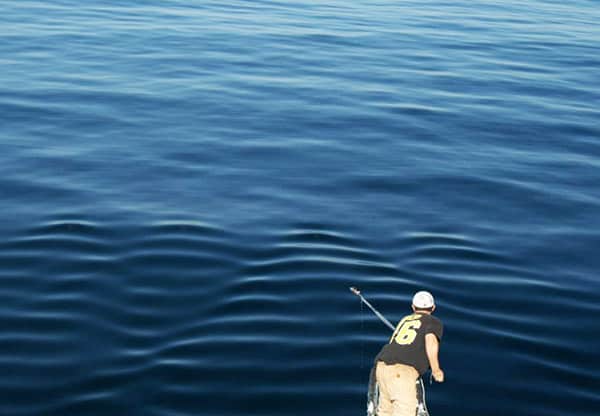 There are two places in the world where this fishery even exists and only a handful of fishermen alive are really professionals. There is only one place I know of where they have legendry harpooners; a small East coast harbor that has been the home for generations of the best harpooners in the world, Perkins Cove in Ogunquit Maine.

Back in the 1950’s Carl McIntyre moved from Small Point to Ogunquit Maine. Carl was a lobsterman, and in the summers Carl and his boy, Sonny, chased bluefin. The McIntyre’s brought with them the ‘Down East’ trade of harpooning bluefin. In the first years they brought in so many tuna that they put this small harbor on the map. Back then the fish were not worth much, sometimes sold in Boston as cat food. It wasn’t even in the same universe compared to the value of a fish today. Not many people harpooned bluefin back then because there wasn’t much money in it. It was a passion, and it was fun, a lot of fun! Some of my earliest memories of the late 60’s were standing with my dad, ankle deep in slime and blood watching the fish being offloaded.

One at a time they were stacked up on the dock. In Sonny’s generation there were the Cardios, Brazier’s, Perkins, Forbes, and Weiners. Down East, long time fishing families had sons now taking notice of this new fishery. By the early 1960’s all the lobster boats had pulpits, some of the boats even had masts, and others had some kind of steering rigged on the roof. Ogunquit was put on the map as hundreds of fish were delivered over the old bait dock. In the 1970’s when I was old enough to get involved, the ‘Cove Guy’s’ were known as the best. The Cove boats would be where ever the fish were the thickest, down in Cape Cod off the beaches of Barnstable, or up state Maine with the old guys from South Point. The fishery was in a new age, the fish were now worth something, and becoming more valuable every summer. We caught fish all summer long, living like nomads, traveling up and down the coast living on small lobster hulls rigged up for harpoon season. When I moved to Alaska in the early 80’s, I left this fishery behind, keeping an eye on the boats and names though word of mouth from some of the Mainers who also fished in the Bering Sea. While researching my book ‘A Hard Way to Get An Easy Living’, I started really paying attention to what was going on in the fishery again. 2011 was a wicked year, the now third generation Wieners, Forbes McIntyre sons were having an incredible summer racking up huge sales to Japan. There were a few new names from my Cove years (30 years ago), but the fact still remained the best harpooners in the world still called Perkins Cove home. Like all 50-year old fishermen, we will have a mid life crises of some sort.

Mine just happened to be buying a harpoon boat and going back home to go fishing.

In 2012 the Harbor Master Fred Mayo, a childhood friend secured me a transit mooring in the Cove. I brought an old Holland 32 stick boat from one of the legendary families of the Ogunquit clans, Matt Forbes old boat the Kathryn Giles. It was like a time warp, I was back in Maine, 30 years later, and it felt like I never left!

The success of any seasonal fishery is determined by many conditions and is a race against the clock. ‘Harpoon time’ has a whole bunch of factors that need to fall in line to have ‘bloody decks’. This fishery more so than any other is dependent on the weather, sea condition, and water temperatures. All three have to be right in order to have a successful fishery, this was true in 1975, and even more so today. The New England harpoon bluefin fishery of today is a whole lot different than it was during my youth. Everything from spotter planes, electric harpoons, to 25 foot long stands and towers to 30-knot boats. There are a lot of boats chasing these valuable fish, and the fish are chased from the moment the fishery opens June 1st. Some days you might have 30 or more harpoon boats in a five-mile area. The one thing that has not changed between now and the 1950’s is the bluefin.

The blue fin tuna is a magical fish, growing larger than any other tuna in the world. The fish migrate into New England and Canadian waters to get fat, putting on hundreds of pounds each summer eating a rich diet of herring and mackerel. When the fish arrive in the cold New England waters in late spring every year, the warmest water is on the surface. The fish will swim in that warmer water band, leaving a plowing wake that harpooners dream of. This is what makes this fishery so unique. Bluefin seem to only run the surface in the waters of New England and Sicily in the Mediterranean, being the only other place where there is a bluefin harpoon fishery. There is nothing like the shear excitement of seeing a large “bunch” running and there are so many deep fish behind the ones up plowing on the surface that you can’t get close enough. You throw your arms off at those fish, just out of reach of that single swimming along with white water rolling off its back. These are the most exciting, heart pounding moments for anyone that has witnessed it. There is no doubt that harpooning tuna is fun. Throwing a harpoon is one of the most primitive methods ever dreamed up by man. It is the equivalent to big game hunting on the water. The big difference between the “days of old” and now is the value of the tuna. Many restrictions and size limits have come about due to the pressure on the fishery. Technology has also evolved, like the electric harpoon, which shocks the fish to kill it quick before the flesh gets ”burnt” from a fight. I miss the days when “flag ends” were being towed by stuck fish. But now the fish are boated, bled and iced within minutes, yielding the most prized sashimi in the world.. 2012 was a huge bummer year for the East Coast harpooners, and so far 2013 has been even worse. The weather has been terrible this summer allowing the fish to blow right by to Nova Scotia again. I couldn’t survive another bad year without getting a divorce (wow things do change). I made the right call and sold the boat and sat this season out. But the Cove guys are still on the water like they have been for three generations. They are still the best in the world at what just a few select people even know much about, what it takes to be a harpooner….