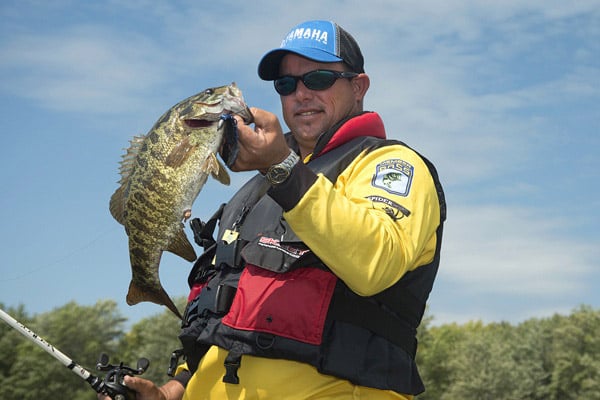 For more than two decades, Yamaha Pro Bobby Lane has relied on a technique and presentation known as “Carolina rigging” to propel him to the top of tournament leader boards, but, as in almost every professional bass fishing technique, Lane adds his own personal touch. In his case, the difference is concentrating in extremely shallow water. “I fish water only about eight feet deep or less,” explains Lane, who used this presentation for three top 10 finishes in Bassmaster® Elite competition during the 2013 season. He ranked fourth in the Angler of the Year standings, and in February will fish in his 7th Bassmaster Classic.® “I believe it works because it’s just something a little different that bass don’t see very often, and it fools both largemouth and smallmouth.

“The real key is using a lure that floats above the bottom. I think bass are usually suspended a foot or so above the bottom, anyway, and a floating lure looks very natural to them.

I prefer a soft plastic creature bait that glides through the water like a small salamander. It’s a fairly large bait bass can’t resist, and because I can rig it weedless, I don’t worry about getting snagged in the cover.” Developed more than half a century ago, the Carolina rig consists of a sliding sinker threaded on the main line, followed by a swivel that stops the sinker. A length of leader line containing the hook and lure is then tied to the opposite swivel terminal; this leader is what allows the lure to move freely while the sinker is dragged along the bottom. Most anglers use the Carolina rig in deeper water and with three-foot leaders and heavy 3/8- and one-ounce sinkers.

“I use sinkers weighing only ¼- or 3/8-ounce, and my standard leader length is only about 18 inches,” continues the Yamaha Pro, “and if the fish are active, I’ll use an even shorter leader.

“What I concentrate on is shallow cover, most of which I can’t even see. I make extremely long casts, and then slowly pull the sinker back along the bottom until I feel it hit some of that cover. When it does, I slow my retrieve even more because I know I’m close to fish. I don’t hop the lure with my rod tip at all, but rather, very slowly and steadily pull my rod to the side so the sinker stays on the bottom. Another key to Lane’s presentation is his use of monofilament line, because it floats far better than fluorocarbon or braided lines. By using 12- to 15-pound test mono for both his main line and leader, he doesn’t have to worry about having his line nicked and weakened by the cover he’s fishing, either. “I fish whatever type of cover is in the water,” he explains, “because that’s where the bass are going to be in shallow water. This can include vegetation, rock piles, laydown timber, boat dock pilings, even shell beds. In shallow water Carolina rigging, I’m not looking for depth changes and channels, just cover.

“I don’t go along a shoreline and cast the water’s edge, but rather, stay further offshore and cast at an angle into the shallow water. I use a 7’3″ medium action rod with a fast tip that lets me make extremely long casts with my light lure and sinker, so in many cases, I’m actually using the Carolina rig as a search tool to help me locate bass because I can cover so much water.”

The Yamaha Pro’s shallow water Carolina rig presentation is a year-round technique, too. Lane doesn’t use it in extremely muddy conditions or when a strong current is present, but he has enough confidence in it to always have two or three rods rigged with different sinkers and leaders no matter where he’s fishing.