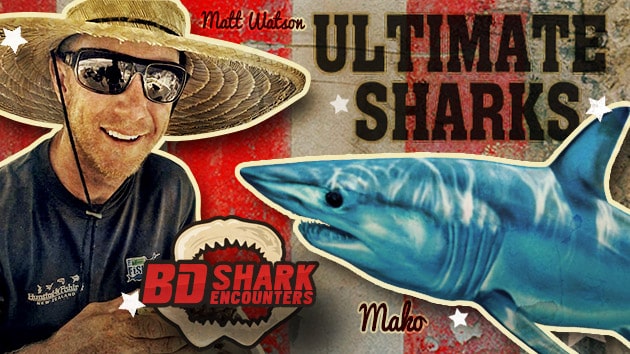 A: A few years ago we caught a very big great white at the Chatham’s Islands, which is 420 miles east of mainland New Zealand. They were just about to become a protected species and we were approached by a research organization to get a DNA sample before the ban came into place. We estimated that one at close to 2000-pounds and its power was jaw dropping. 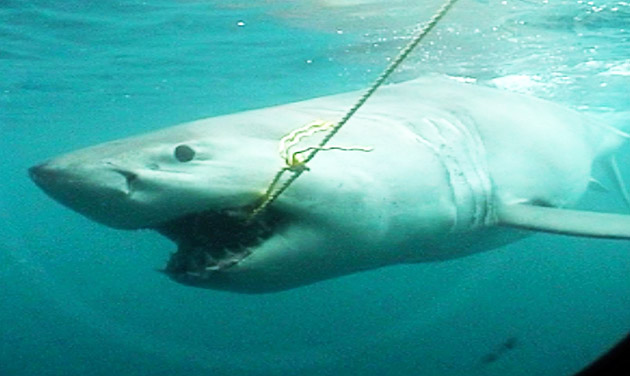 A: The white at the Chathams was the biggest one I’ve seen but I have recently had two encounters with a couple of massive mako sharks, one of which I’ll talk about below.

A: The most in numbers would be in the Pacific Islands. It’s not uncommon to be surrounded by dozens of sharks, mainly white or blacktip reef sharks, and I always feel relatively safe when diving with them.

A: Yep, just once. I had a school of blue sharks around me and I didn’t realize one of the boat crew were berleying them up, cause he thought that was the right thing to do. When I noticed, I lifted my head to tell him to stop and one of the sharks took a shot at me. He came right in on my chest and luckily he got caught up in my wetsuit and backed off. I’ve been chased out of the water a few times but that’s the only bite. 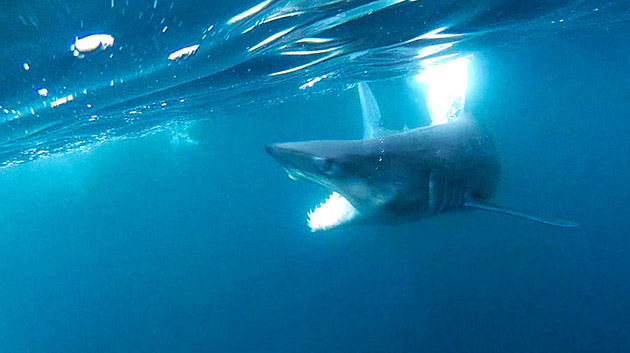 A: The mako, easily. They are a smart and considered hunter. They are the only species that I’ve seen that can override their primal instincts to attack. Even with their prey thrashing and bleeding out in front of them they will hang back and wait until the fish is dead before coming in for a feed. They seem to have a sense of mortality and protect themselves at all costs.

I would have to say the blue shark, and mainly because they are the total opposite of the mako. They operate almost entirely on instinct and are unpredictable because of it. I am always at my most focused and weary when I’m in the water with a blue shark. 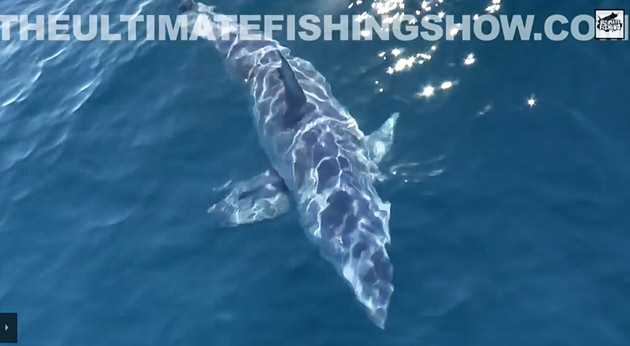 A: Earlier this year I was filming an episode for my TV show and we were hoping to catch a broadbill swordfish on a handline, off my small trailer boat. We had a perfect day, it was a bit early in the season but we thought we’d have a go. Well we got the broadbill, and it was a beauty and we thought we’d hit pay dirt with a big aerial jump close to the boat and on camera. However after that the line went slack and the fish was still going crazy on the surface.

We raced over to try and put a tag in the broadbill only to find the biggest mako shark that I had ever seen tearing it’s tail off right in front of us.

I’ve seen it done before but never had a camera crew with me, so this was a rare opportunity to capture the vision to go with the stories I’ve told over the years. As if to plan, the mako removed the fish’s motor and then hung back and waited for it to bleed out. Their next move is to wait until the fish is all but dead and then come in and remove the bill, rendering the broadbill completely defenseless. As a species the mako have worked out that a broadbill will float when it’s dead so they’ve got all the time in the world; and with the size of this particular mako it meant it was going to be a very big competitor to put him off his lunch. The broadbill was still very much alive and we were now in a tug of war with a very big, angry and hungry mako. Both parties wanted the prize so it was a race to see who wanted to tangle with the broadbill first. I’ve seen guys cut-up and had legs and arms broken by that thrashing sword so I was very apprehensive to approach too soon, but if we were too slow we’d miss out all together. We put a rope over the bill and then with a lot of heaving and swearing, and in front of a circling mako, we dragged it onboard. While we were happy with our efforts Mr. Mako was not, and he started attacking the boat to get his meal back. We cut away a big section of damaged flesh from the broadbill and fed it to him but that was not enough. As we motored off he started chasing the boat and we were wondering where this was going to go. We carved him off another piece and fed it to him as we motored along and that was enough of a distraction for him to admit defeat and leave us be. Back at the dock we measured the fish out to 250kg, (550-pounds) and that was without his tail and a big section of the back area, so who knows what he would have been whole. It was as exciting as it was scary, as it was lucky, but it was definitely memorable! 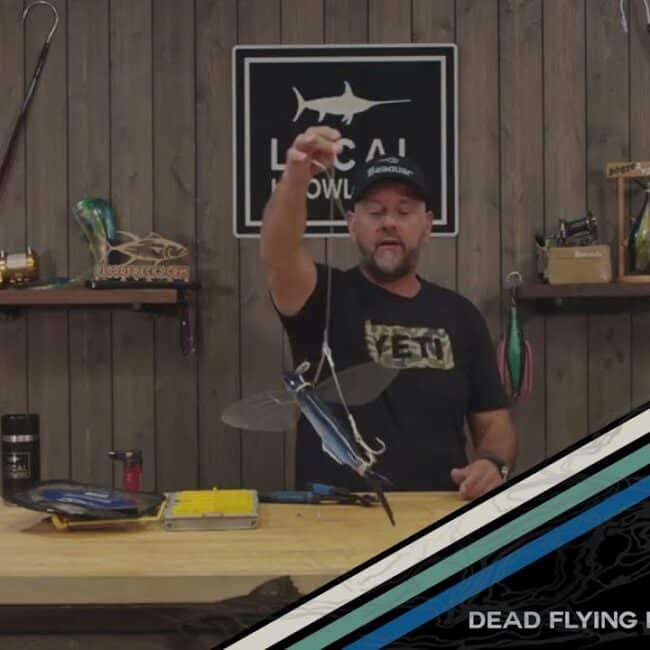 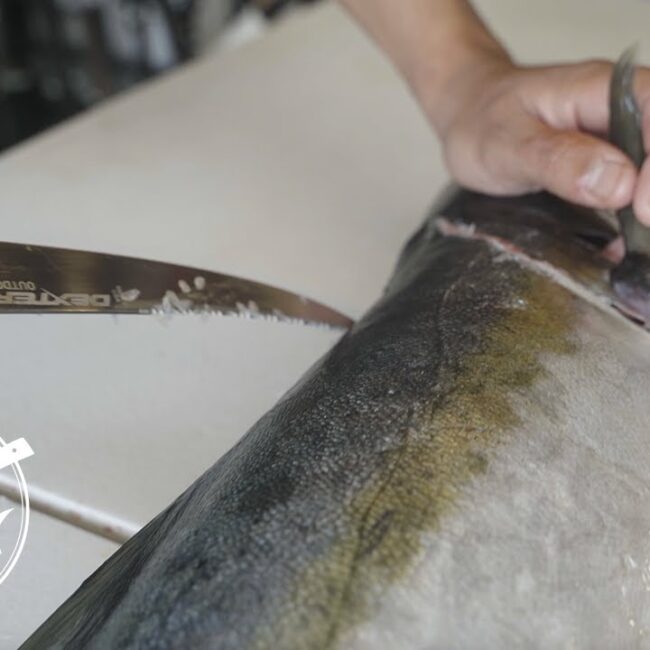 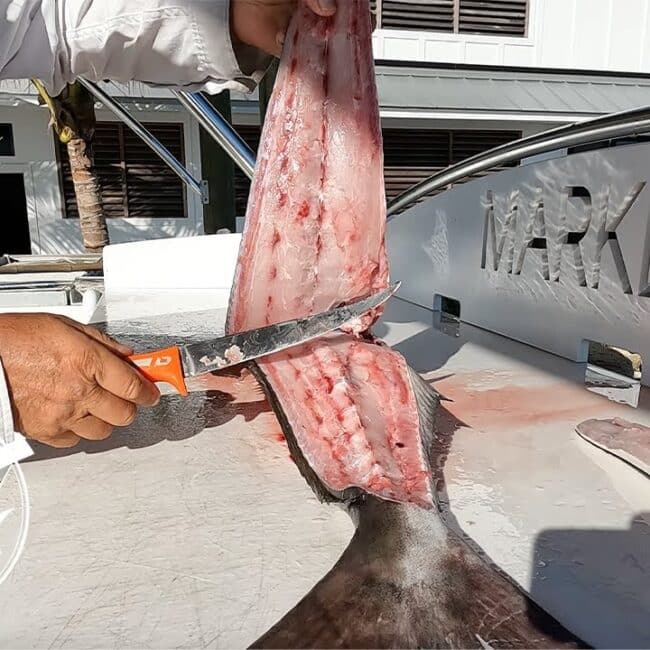