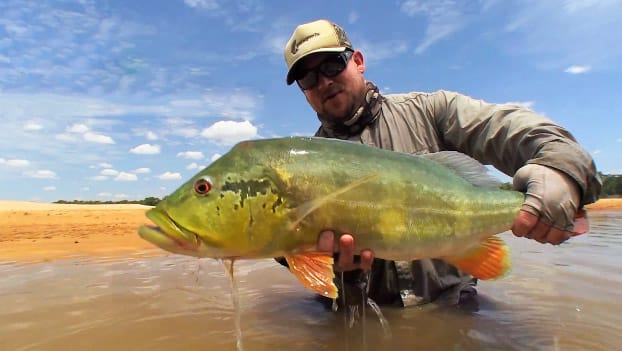 The GEOBASS project is about four anglers’ relentless pursuit of off-the-hook fishing in out-of-the-way locales. They’ll be after exotic species in Colombia, Mexico, Nicaragua, Africa and Papua New Guinea. Getting to the fish is half the battle – and much of the viewing fun.

“If a fish has the word ‘bass’ anywhere in its name, we’re going to try and catch it, no matter where in the world it lives,”

GEOBASS team member Robison said. “This is bass fishing like you’ve never seen it before,” said Al Perkinson, vice president of marketing for Costa. “These guys put themselves in incredible danger – from nearly being arrested in Mexico to encountering near-death experiences in South America. But to them, it’s just another day at the office.”

To bone up on new bass fishing techniques and tips, the team has been tapping into the best sources in the world: Elite Series pros. They’ve also sought the advice of B.A.S.S. co-owner Jerry McKinnis, who hosted the longest-running fishing show on ESPN.

The full GEOBASS viewing schedule at the nine Elite Series events of 2014:

Mexico Part I May 3, Toledo Bend Reservoir, Many, La. – Episode 3

All videos will be available online at http://www.costadelmar.com/geobass.

Viewers can share their stories online using the hashtag #GEOBASS.