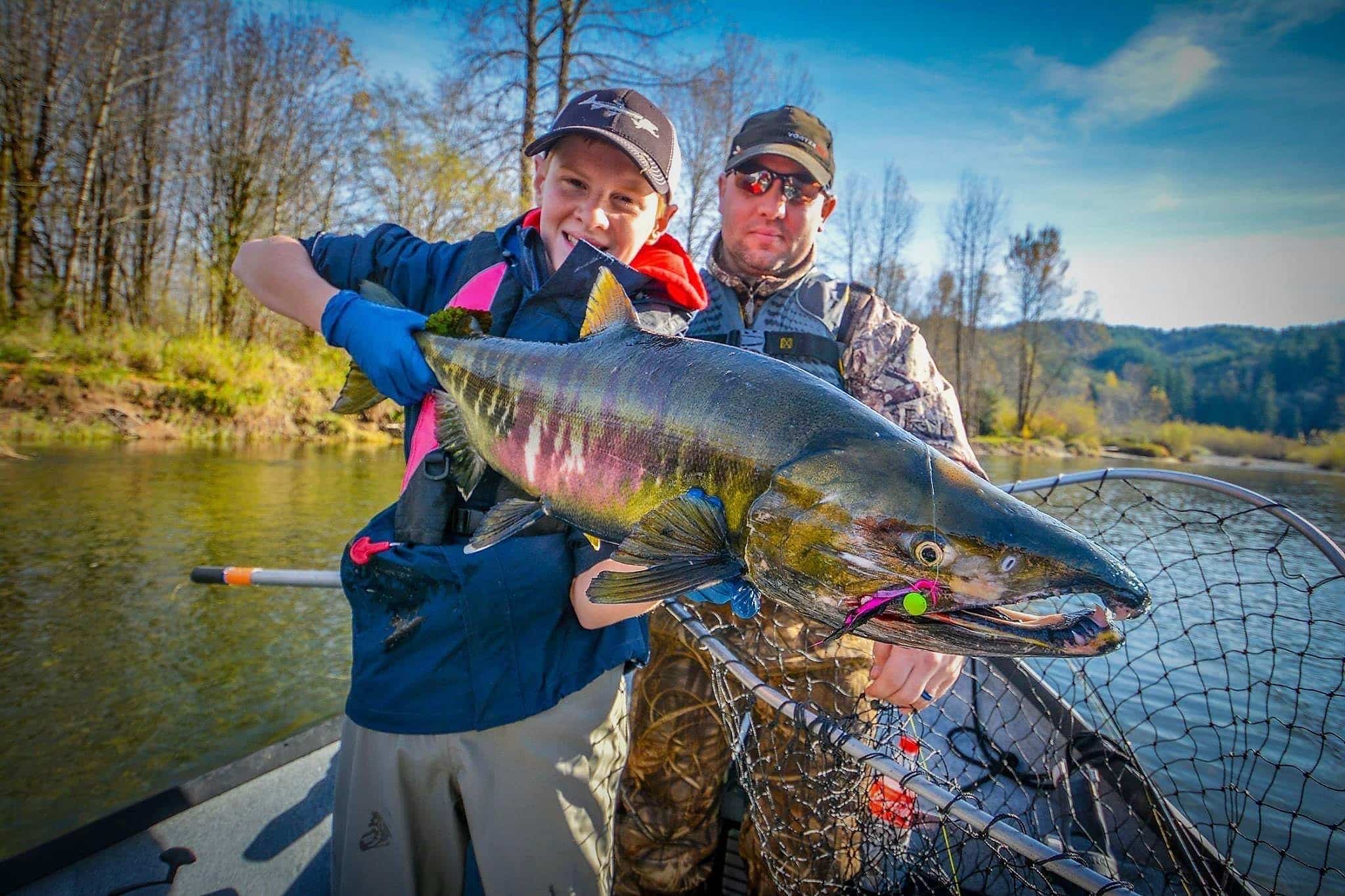 It’s been a different kind of year.

Looking back on it, I’ve spent 2020 about 50/50 between SoCal and Seattle.  While I always had my eye on the SoCal Top 10 for my annual fishing goals, I’ve had to adapt.  When it was time to chase certain species, I wasn’t around to go after them.  We’ve all had to adapt though this year.  When it’s all said and done, I think I’ll still end up matching last year’s total of 8 of 10 of Southern California’s top saltwater gamefish species.

But looking at 2020, solely through the lens of the SoCal Top 10 only reveals half of my fishing year.

For the other half of my time that I spent in the Pacific Northwest, I created other fishing goals to focus my fishing efforts on while I’ve been up there this year… 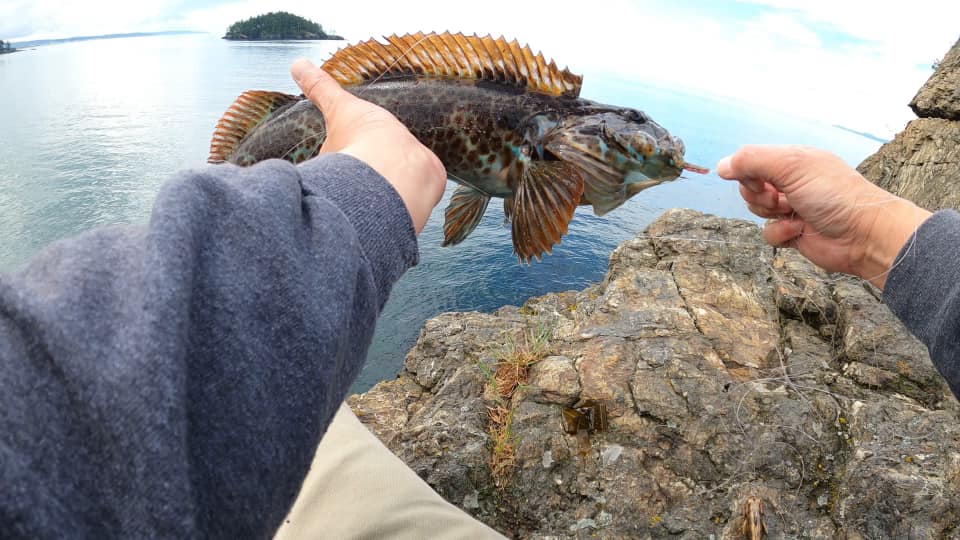 I attended Day 1 of the Fred Hall Show in Long Beach this year.  That was March 4th.  The following day, I left for Seattle.  My intention at the time was to visit my mom, do some work on the house, spend maybe two weeks up there.  Next thing I knew, the country was facing imminent lockdown due to coronavirus.  Worried about who was going to look after my mom, I decided to stay.  A recreational fishing ban went into effect by the end of the month, and I languished for about the next 6 weeks or so getting through life without fishing.  It was the longest stretch of not fishing I’d experienced in years.

When the ban lifted, open party boats and guided trips were still off-limits.  I needed to find something I could do on my own.  I focused on catching a lingcod from the shore.  I won’t rehash that whole tale.  If you want to read about it, you’ll find the story HERE.

I gotta say though, that catch just might be my favorite of the whole year! 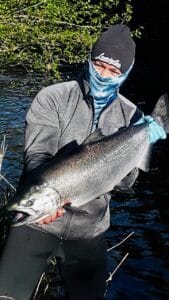 Before open party boats opened up, the opportunity to go out with guides in small groups was the best fishing opportunity.  I reconnected with Anne Levinson who used to cook on one of my boats out of Channel Islands Sportfishing, the Gentleman.  Anne and I spent a day on the Sol Duc River with guide Shane Mitts of It’s Fish On guide service in the middle of the breathtaking rainforest of the Olympic National Park of Washington State.

I had caught a king salmon in Oregon on my way up to Washington.  I couldn’t keep it though because I caught it a couple of days before the opening of the chinook (king) salmon season.  I was hell-bent on taking a big salmon home to eat, and Shane really came through.  Not only did I catch my king to take home, but I also caught a steelhead and a cutthroat trout for a very cool and extremely “rare for me” river slam. 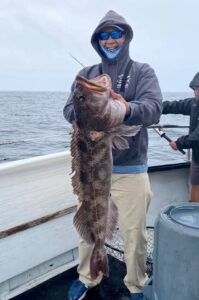 I’ve been chasing a 20+ pound lingcod in Southern California for years.  I’d seen a handful come over the rail over the years on several rockfishing trips from Colonet to the Channel Islands, but never one attached to my line.

Lingcod get bigger as you get further north up the coast in the colder water.  When open party boats became an option, I wanted to see if maybe I could find one of those bigger fish up here.  I rode on the Angler out of Ocean Sportfishing in Westport, WA in early June.

As things turned out, I got lucky and caught a perfect little sand dab toward the end of the day that I could use for bait.  That little dab got me 4 fish on 5 bites.  The biggest of the four fish landed weighed out at a new personal best 22-pounds!

I mentioned previously how I got 8 of the 10 Top 10 Southern California fish in 2019.  The two fish I missed were a jig caught barracuda and a halibut.  I’d managed to catch some short halibut over the course of the year, but no legals.  Since I was up north, I wanted to see if I could catch a Pacific Halibut (as opposed to a California Halibut).  Halibut fishing was closed in Washington State, so I rode on the Umatilla II out of Newport Marina Charters in Newport, Oregon.  I missed badly going 0 for 3 on my first try with them towards the end of May.  I went back and tried again mid-June.  That time I went 3 for 3 catching 3 of the 8 fish that hit the deck that day.  The biggest of my three went about 31-inches. 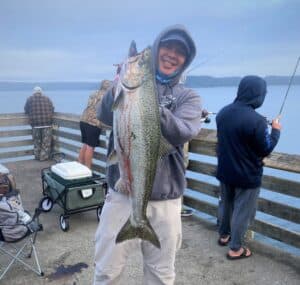 I made a return visit to SoCal in July.  I wanted to see my daughter for her birthday and I just needed a dose of SoCal.  When I got back to Seattle after that trip, I turned my attention to catching salmon at the public pier 20 minutes from mom’s house – Dash Point Park and Pier in Tacoma, Washington.

I’d gotten a taste of this kind of fishing in August of 2019 during a short visit for my mother’s birthday.  This time around, I wanted to put more time into it and hopefully get a better outcome.  While I missed my best shot of the year at a 20-pound fish, I did manage to get a 3 kings and 2 silvers off of the piers (Dash Point, Redondo, and Edmonds).

I was really hoping to catch some albacore tuna while I was up north.  I think I’ve seen 2 since I started fishing in Southern California.  I’ve heard all the stories though from other anglers how they’d enjoyed fishing for them during the ’80s and ’90s.  The Umatilla II boys invited me out on a crew trip with them to go chase them, but the fish never ended up getting within their day-trip range of 40 miles from shore.

With that opportunity passed, there’s one more fish I’m hoping to put on my resume before selling mom’s house and saying goodbye to the Pacific Northwest.  There’s a saying among salmon fishermen, “Five kinds of salmon, ten names.”  Kings or chinook salmon are the apex of the five salmon species.  At the bottom of the scale in desirability (at least in terms of table fare) is the chum or dog salmon.  The dog salmon name comes from their use in Alaska as the preferred species to feed your dogs.  That being said, the chum salmon undergo a radical change once they head upriver.  Their upper jaw takes on a wild curvature and their skin turns into some crazy looking colors.  At this point in their life cycle, they aren’t good for much, but a good fight and a great picture.

That works for me!

The time to catch this fish is around Halloween.  I’m headed down to SoCal this week for a 2 day on the T-Bird this weekend (still room if you want to go).  Once I get back after that trip, it will be time to chase the chum.  One last fishing goal to fulfill before leaving the Great Pacific Northwest.  Wish me luck and hopefully, I’ll see you out on the rail back in SoCal soon.