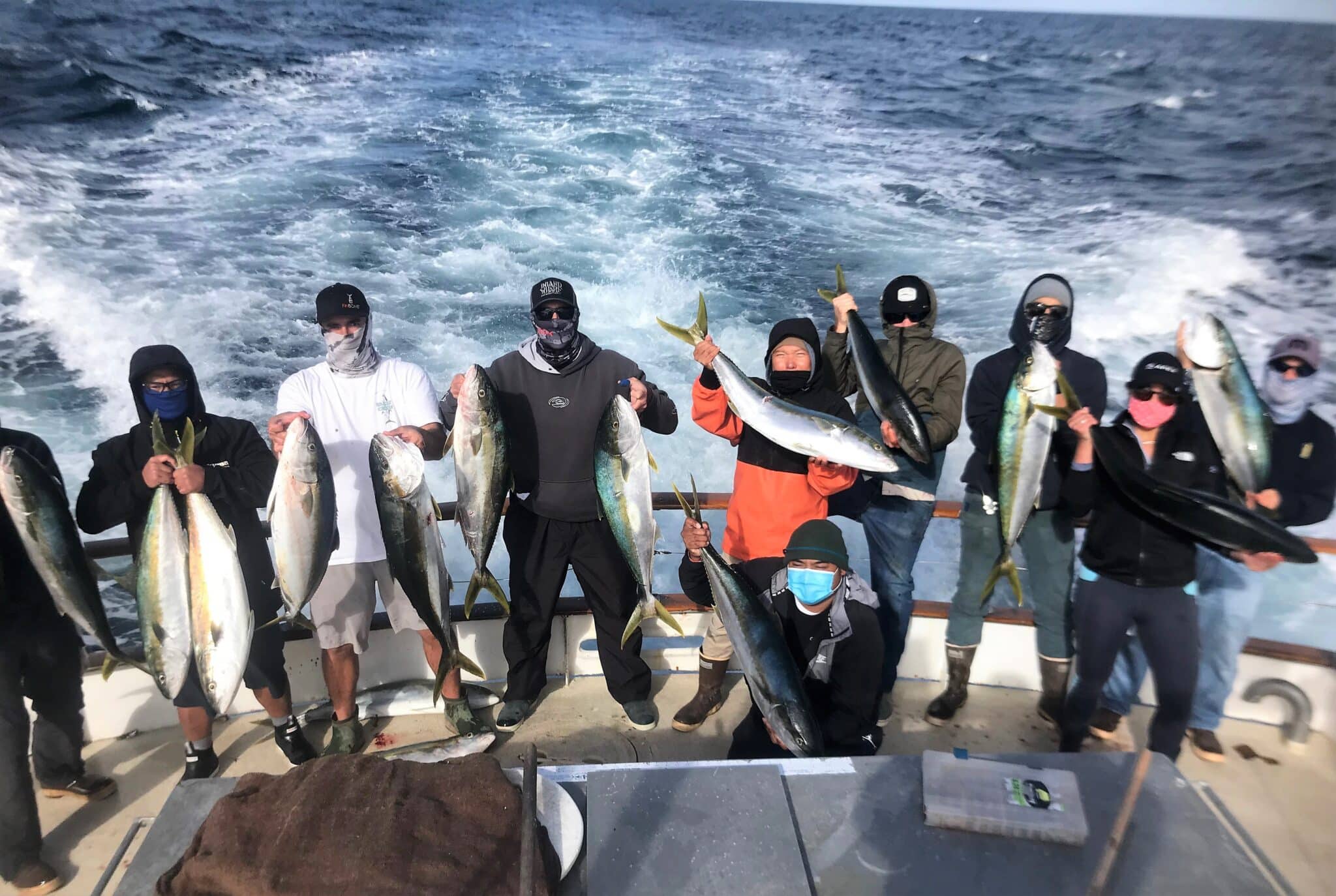 This time of year, sportboat fishing options tend to shrink.  It’s been a long season and now is the time that a lot of crews tend to take a break before boat work in preparation for next season.  As a result, fewer overnight/multi-day boats are going out right now.  The ones that are, are only doing weekend trips.

Local boats may be on winter schedules with fewer days fishing or altered hours.

Is it even worth going out right now?  In my opinion, yes!

While I was down this week, I checked out a few spots…

My buddy Marcus Fain is with the CDFW and an excellent fisherman.  I arrived from Seattle on Sunday (December 13th) and reached out to Marcus to see where he would be fishing this week.  “New Del Mar Tuesday afternoon.  Wednesday Redondo Special twilight.”  I’ll see you Tuesday.  On my way out, a backup on the 105 freeway was holding me up.  Marcus had Capt. John Petrov hold the boat for me and I just made the trip.  I was hoping they would be doing some bass fishing, but John said we’d start the day making squid, then head to some deeper stones to try to convert them into red snappers (vermilion rockfish).  No big, I tied a double dropper on the heavier rod I brought (Fishing Syndicate FSC800L), and a squid snagger on my lighter rod (FSG800XL).

Making squid didn’t go particularly well.  We only made maybe 50 pieces for 20 anglers.  Luckily they had frozen too, as well as, some live sardines.  Long story short, two things made a huge difference in the catching.  Obviously, the live squid (or fresh dead) was much better than the frozen.  Secondly and less obvious was a longer dropper loop.  I didn’t clue in to the second thing until later in the ride when crewmember Eric Ullman hooked me up.  At that point in the day, all the live squid was gone, but Eric made me some strips out of the fresh dead and I was able to put together a decent sack of mixed rockfish.  Marcus on the other hand had the right rigging from the beginning.  Combined with the live squid, he made a nice sack of better reds.  Small details make a big difference. 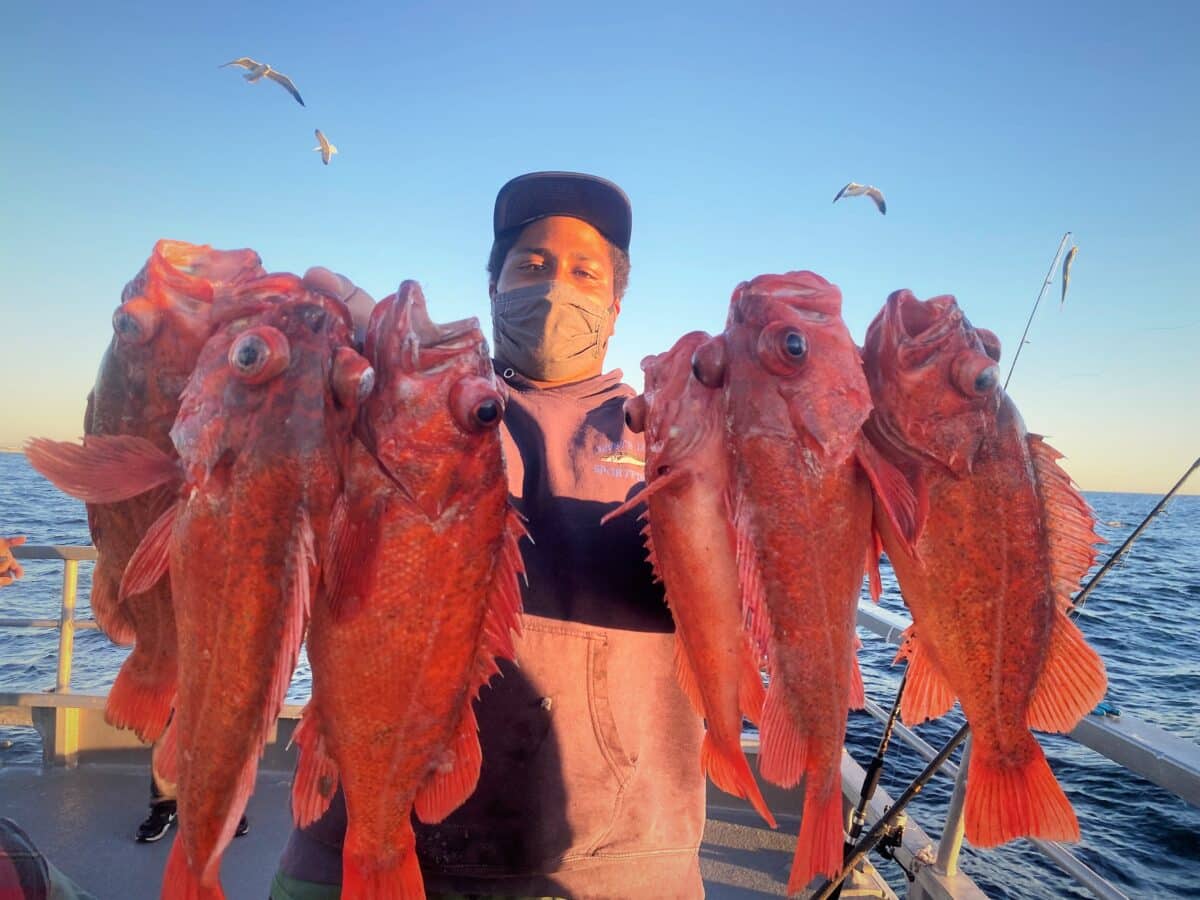 Capt. Kris Karpow has been keeping me up to speed on what he’s been seeing on his boat the Sea Watch.  He’s been covering the half-day run for the New Seaforth since it went into the yard.  He’s been having mixed luck seeing (and catching) yellows in the waters off La Jolla and Mission Beach.  The height of it was last Monday (December 14th) when they hit it with 21 yellowtail for 15 anglers (below).  Some of the fish were caught on dropper loops with live sardine, but most were yo-yo irons. 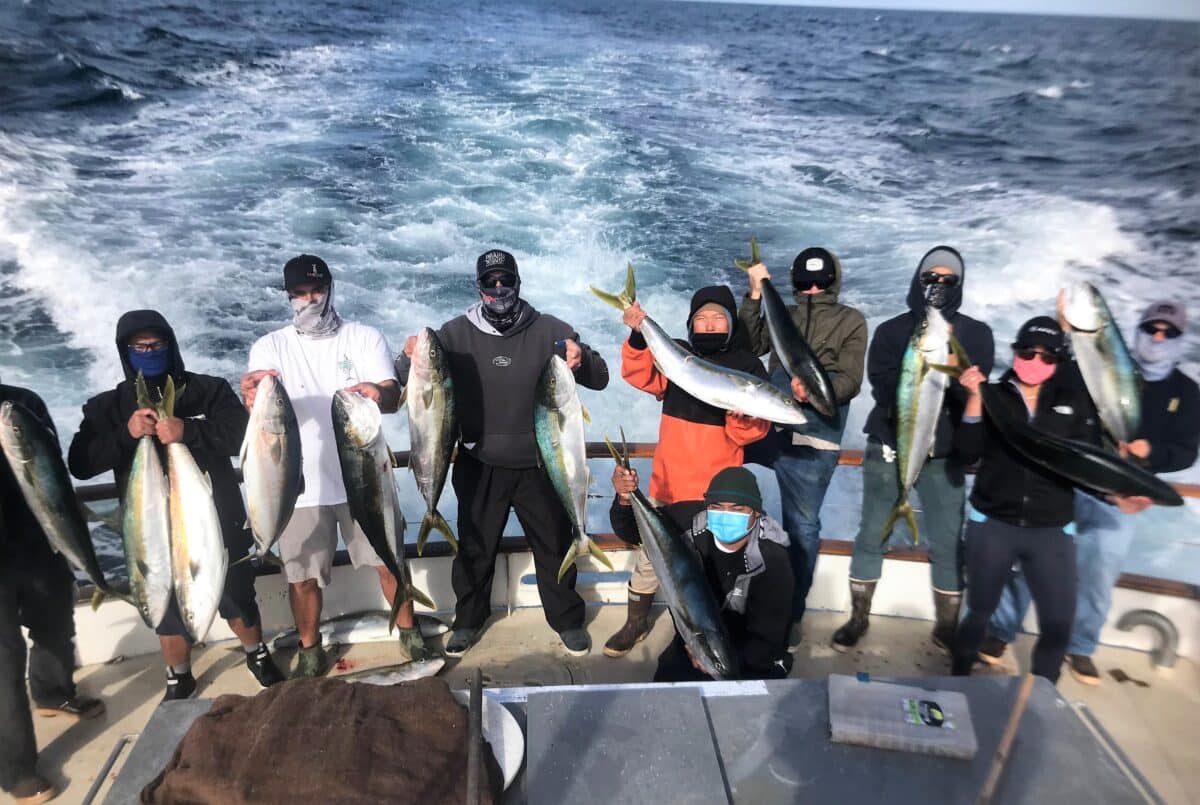 I came out to ride with them on Thursday (December 17th).  My trip ended up being a “shoulda been here Monday” kind of ride.  Kris was able to find a couple of smaller schools in deeper water (200-300 feet), but we only had one hookup for the boat (on a dropper) that eventually was lost to a sea lion.  Oh well, we had opportunities.  Things just don’t always work out.  Nevertheless, the opportunity is there and it isn’t a big commitment of time or funds being a half-day ride.  If you get a chance midweek, jump on the morning ride and you might just hit it on the right day.

Sunday (December 19th) I made plans to ride with my buddy John Anjard on his skiff.  This is a favorite option for us in January and February during the rockfish closure, but given the LJ yellows didn’t want to go and lack of interest in rockfishing we chose to hit the bay. 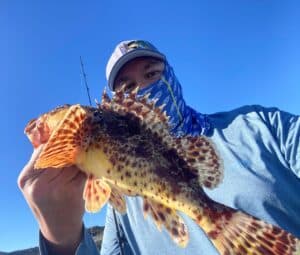 We launched at the Shelter Island ramp and picked up a half scoop of live sardines at the bait receiver.  We tried a couple of spots in the channel near the receiver but didn’t have much luck.  We only got one fish, a big sculpin that I didn’t keep.

From there, we made a long move to SD Bay proper in front of Downtown San Diego.  There we found more favorable conditions and found a drift line that produced some fish.  It started out with spotted bay bass, but I did manage to catch the target species.  It just missed being a keeper by less than an inch. 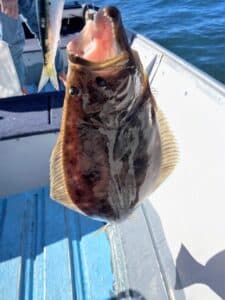 As the day was winding down, John wanted to run back toward Shelter Island and try a couple more spots before we lost light.  One of the spots had produced a 43″ halibut for him last week, and the afternoon conditions are better for that spot.  We tried it for some more bass and a short.  Right at dusk, we had a little flurry where we caught some keeper sand bass and a couple more shorts.  My final tally for the day was 3 short halibut and several bass including a smaller calico to round out the trifecta of saltwater bass.  Not a bad way to end my trip.

I’m headed back to Seattle to go get my mom and will be back in the new year.  I wish you all Happy Holidays and look forward to a better 2021 for all of us.