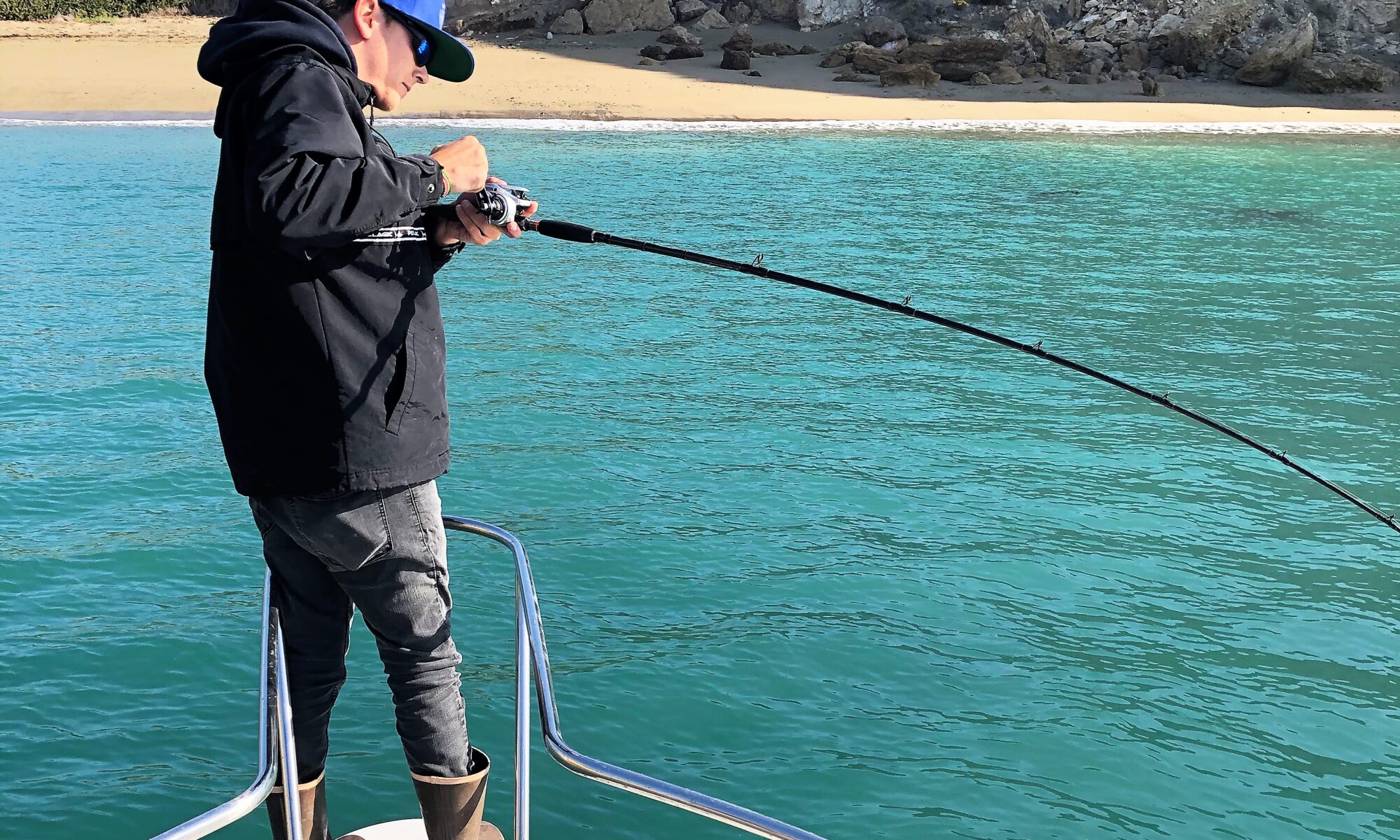 I caught my first white seabass ever by accident.

It was June of 2011, and I was riding the New Del Mar in Santa Monica Bay.

Barracuda was the target species of the day. There were a bunch of kids on the boat that day because they had attended the Marina Del Rey Anglers club event, Youth Day At The Dock, that morning. I had volunteered at the event, and my ex-wife drove the kids out to join me for the PM halfie. The crew had rigged them up with flyline bait setups to target the cuda. I wanted to catch on surface iron, but my jig was catching on 2 or 3 lines on every retrieve. Frustrated with how that was working (or not), I decided to drop a leadhead and squid down to the bottom in hopes of catching a sand bass. I was twitching it on the bottom when I got the big bite. It was one of those rare occasions when the fish I caught was so head and shoulders above everything else caught that day, that there wasn’t even a jackpot weigh-off.

It’s better to be lucky than good.

Having gotten my first taste of the elusive ghost, I set about to try and catch one purposely. It took me seven tries before succeeding. I farmed a bunch of fish that should have been put on the boat over those seven trips, but I learned (painfully) how to avoid the mistakes that cost me those fish. A majority of those trips were with Capt. Shawn Steward, owner/operator of Aloha Spirit Sportfishing.

Shawn is to seabass, as what Capt. Ryan Bostian of the San Diego is to yellowtail. He’s a guy whose unique skills you want working for you in order to give yourself the best chance for success. Crewmembers from the entire Southern California coast make the long trip north to charter trips with Shawn because of his well-earned reputation for putting people on white seabass.

So when Shawn bought a new six-pack boat this year, the Graylight (left), I didn’t hesitate to book some charters with him. The first of those charters was last Friday, April 17th.

Shawn and I chatted on the phone Thursday afternoon. He wanted to see if we could get out an hour earlier to take advantage of the morning bite that had recently seen some success on yellowtail and seabass (see last week’s post). Our group of five anglers was at the boat and ready at 4am Friday morning. He hadn’t had success making live squid, so we had fresh dead on board (the next best thing).

We started the day somewhere around Santa Cruz Island. Santa Cruz Island is the long and skinny island, second one out going west when you launch out of the Oxnard/Ventura area. At first light (top) we drifted above a squid nest. Shawn wasn’t immediately marking fish upon setting up the drift, but he liked the sign of life below and we gave it go.

I was fishing a high dropper loop using the Fishing Syndicate FSC-800M (rated 20-50#), paired with a Shimano Trinidad 16A, on 30# mono mainline, to 30# fluoro and terminated with a 6/0 Owner Aki Twist hook and 8-ounces of lead. To me, this is the optimal setup for this particular application…a medium action rod to cushion the headshakes while applying and maintaining maximum pressure on the fish, and a star drag reel to fine-tune the drag from the initial bite to gaff. On the recommendation of crewmember Kenny Balkom, I set the drag more for a yellowtail bite than a seabass-oriented drag setting.

It didn’t take long. Two minutes into the first drift of the day, I was bit.

Good fish. It fought hard and made things a little interesting given the relatively small deck area (as compared to the bigger sportboats I’m more used to fishing aboard). Despite an under wrap issue on my reel (my bad), I managed to successfully withstand the fight and bring the fish to gaff. First fish of the day! It was a nice grade of fish too. I guessed maybe 18-pounds, a little heftier than the tails I caught a few weeks ago on the San Diego.

Shortly after that fish was on the deck, my friend Becky Chong got bit. Unfortunately, the fish came unbuttoned and got away. At that point, it felt like it was going to be a day that we could put up a big score. Just like that though, the school disappeared and we went looking.

The majority of the morning was spent chasing bird schools to find fish and then dropping in on them with our squid-baited dropper loops. Shawn told me they have tried using yo-yo’s on them, but they haven’t yet responded to that presentation. Despite Shawn’s best efforts, those were the only two big bites of the morning.

On the suggestion of my buddy, Matthew Lowe (below), we switched up to fishing the shallows for halibut.

One of the things that’s really cool about fishing on Shawn’s new boat is the ability to get in tight like we did in less than 10-feet of water.

Another really cool thing is that in order to maximize space on the boat, Shawn provides all the tackle you need. You can show up with your own rods and reels (and nothing else), or he’ll even provide all the gear at no extra charge. For this application, Kenny suggested using half-ounce leadheads and Zman swimbaits that the boat provided.

We casted up toward the beach and slow rolled our swimbaits back along the bottom. Matthew had a follower on one of his first retrieves, and scored moments later on a nice legal. We tried this strategy on a few beaches, but there was only the one fish that bit.

From there, we decided to move to deeper water and put some meat on the boat for everyone. Shawn put us on a very productive spot that was just under 500-feet deep. There we loaded up on doubles of big reds. I also managed to have a double with a nice red on top, and a legal ling on the bottom! That was my first legal ling for 2021.

We quickly put on a limit of 5 vermilion rockfish for each of the five of us fishing, plus some random other rockfish (chucklehead, bosco, rosy, bocaccio).

For the final stretch of our trip, we targeted lingcod. I managed to get a second ling on a heavy (8-ounce) leadhead and big swimbait (Thanks Matthew!). It compared very favorably to the first one I got earlier. The big winner for this portion of the trip though was my buddy, Scott Swaving.

Scott nailed 3 legals in quick succession using a 12-ounce knife jig he found at a garage sale. The biggest of Scott’s 3 fish was a monster that looked like it could fit a volleyball in its mouth!

That was our day. It was a very good one that saw us fish for a wide variety of species across a varied seascape ranging from under 10-feet of water to almost 500-feet of water!

An experience like the one we enjoyed, could only be had on a boat like this, with a captain like Shawn. Although the seabass didn’t want to play this trip, I was so happy to get my yellow/ling combo, see Matthew get his swimbait halibut, and see Scott get his big ling. This was Becky’s first fishing trip ever, and she had so much fun she definitely plans to return. Thanks so much to Shawn and Kenny for providing us with a fun day of fishing on a beautiful day up north in the Channel Islands. I have 2 more dates with Shawn on the Graylight on Friday, May 21st, and Friday, June 4th. There are a couple of spots remaining, so hit me up ASAP if you’d like to ride with us. Shawn will also occasionally put up some open party dates, so keep an eye out for those trips too.