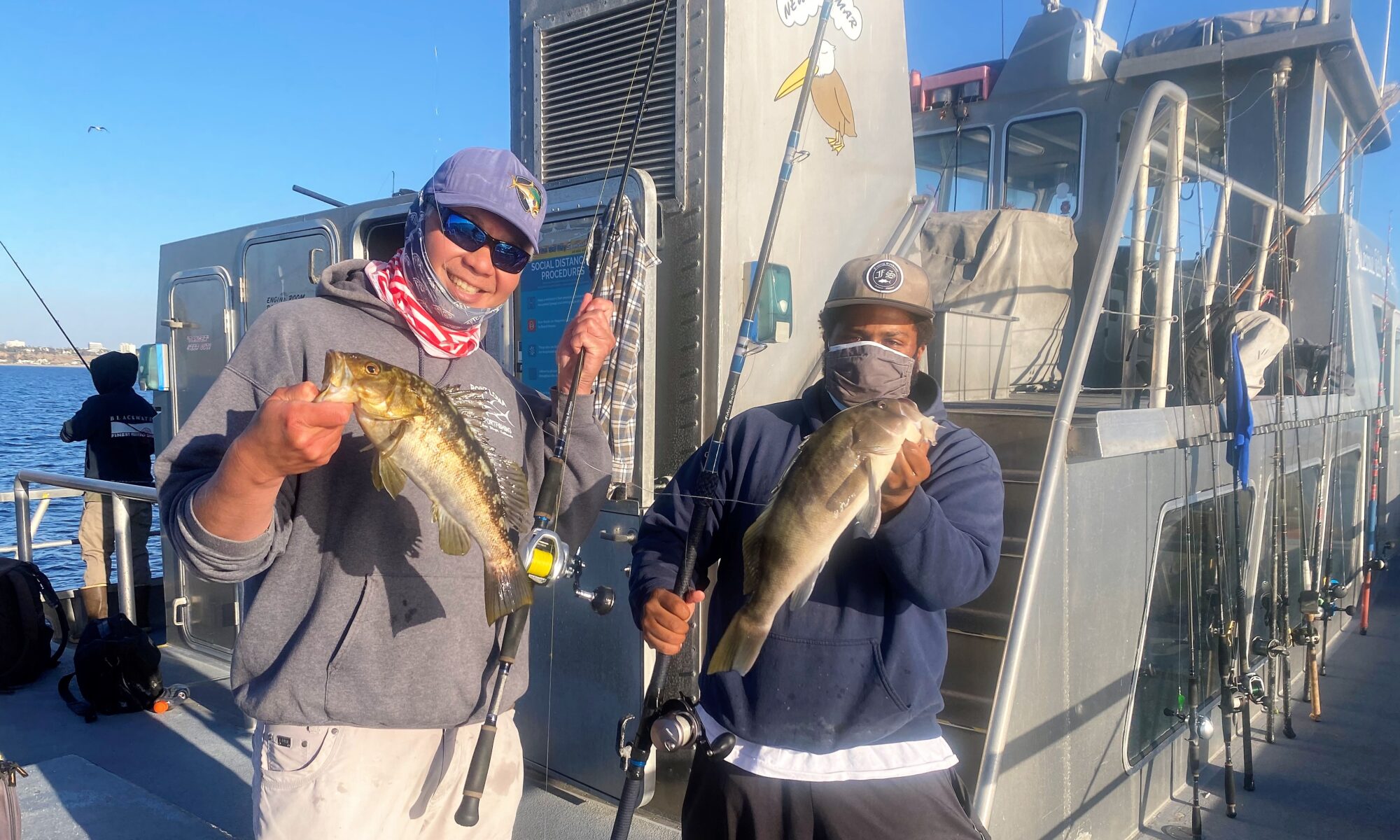 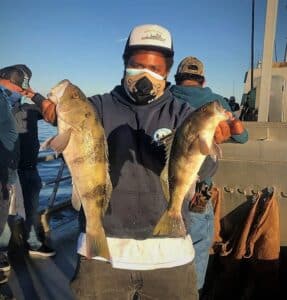 I was bummed 2 Fridays ago (Feb. 19th) when my buddy, Marcus Fain (right), a CDFW officer and Marina del Rey Sportfishing regular posted that he had a good trip on our regular half-day boat, the New Del Mar.  Marcus invited me to go, but it was last minute and I was already at the beach surf fishing.  It would’ve been impossible to go back, get the right gear, then make it back out in time to ride the boat.  Oh well.

With the rockfish season rapidly approaching, I figured I’d just wait it out, and put in more time on the beach.  But when Marcus texted Thursday morning (Feb. 25th)…

“Hey can you fish today?”

Perfect…one last winter bass sesh before moving on to rockfishing.

I met Marcus in the parking lot at Dock 52.  He was still in his CDFW uniform.  He needed to survey the anglers coming off the morning ride before being on his own time to fish the afternoon ride.  Once we were onboard, we found Capt. Danny Ericson leading the trip, Sigi Aguirre working deck, and Brett Janszen Smith working galley and deck. 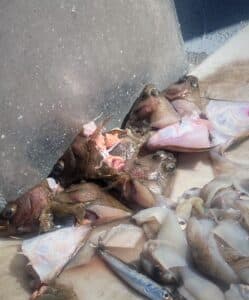 I found this funky array on Sigi’s cutting board.  “What are these sand dab heads all about?”  Sigi told me there are a lot of short sculpin at the spot we’d be going to, the dab heads helped to weed out the shorts.  All right then.  He also told me to rig up my sculpin rig with 8-ounces as we’d be fishing pretty deep.  I rigged up, bought a beer and settled in for the ride out to the sculpin grounds.

Always listen to the deckhands. 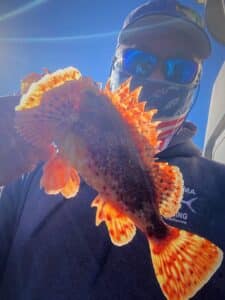 I would’ve only used 5 or 6 ounces, but you needed 8.  It felt like it was at least 200-feet.  I tried the dab heads, but there were still quite a few shorts.  At the same time though, it was pretty easy to get bit.  I got a legal on my first drop, but it was like 3-4 shorts for every legal.  It was good steady action on them until everyone got their limit of 5 per angler.

On to the bass grounds!  One thing you’ll want to file away in your memory for next year is that the best of this style of fishing was definitely in those first couple weeks of January.  As the season progressed, putting a legal bass on the boat became a progressively harder task.  This trend seemed to be the case regardless if it was up this way in Santa Monica Bay, or whether it was the Newport boats fishing south of here.  A majority of people are still in a post-holiday fog at the beginning of the year, but it’s a good time to ride your local half-day boat.

I guess all of that was to say it was tough fishing at the bass spot.

I got bit fairly quickly out of the gate, but it ended up being a short calico.  After that, I was feeling pecks, missed a couple of bites, and overall just couldn’t quite get it going.  I had set up 2 bass knocker rigs, one with the leadhead and 2 half-ounce sliders, and a lighter one with 2 quarter-ounce sliders.  I ended up losing the bigger setup in the rocks and went to grab the lighter setup (Fishing Syndicate FSG 800L > FSG 800XL).  Right after making the switch, I got bit hard.  Marcus was fishing one angler over (Brett was fishing in between us).  As I was mid-fight, he got bit too.  Double bendo!  We both got our fish.  Marcus’ was a bigger sand bass.  Mine was a calico.  Knowing it’s been tough, I made sure we took a pic together. 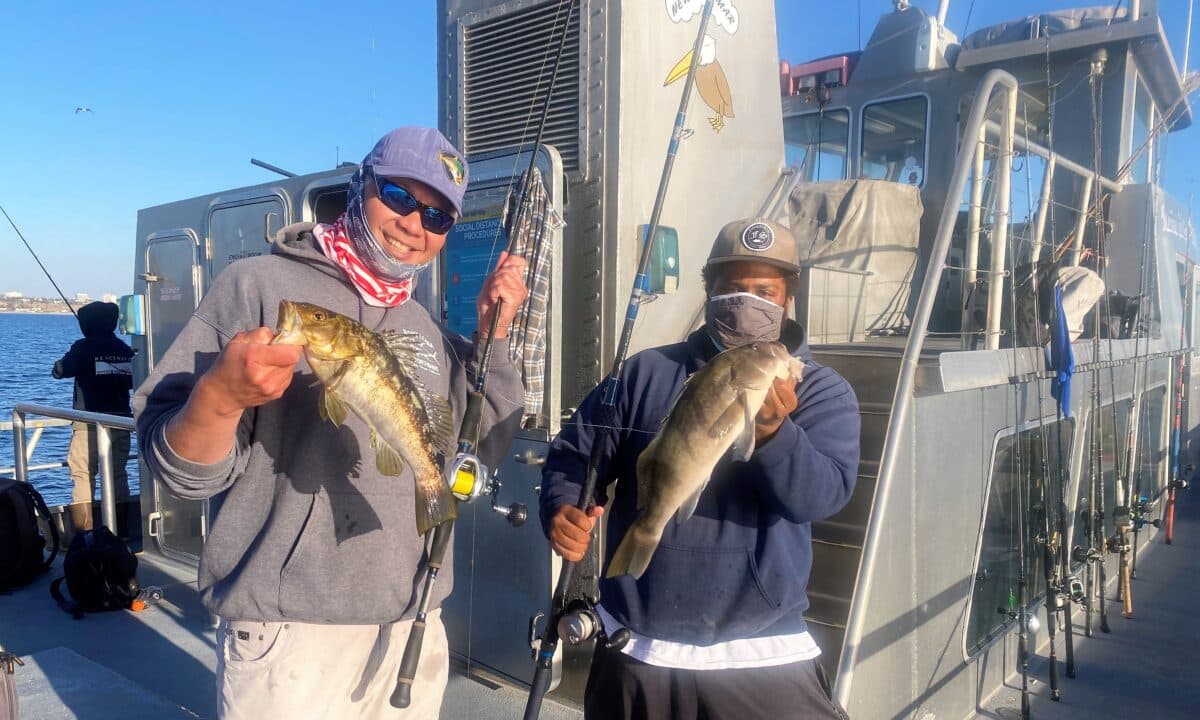 Time was running out on the clock.  I went back to having a hard time getting bit.  Marcus put one more on the boat.  As a last-minute tactic, I tried fishing a live anchovy.  I did get bit just as Danny was calling time, but somehow it managed to wiggle off before making it into the boat.  That was that.  The 3 bass between Marcus and I were the only legals for the trip.  I’ll take it though.  Limit of sculpin and a nice calico to take home.  That first bass Marcus caught earned him jackpot.  It was a nice way to end the winter bass season.  Thanks to Danny and his crew on the New Del Mar for a predictably good ride.

As you read this post, the rockfish season has just re-opened.  With the whole fleet back out on the water, it’s exciting to think what may be next in store for us.  I can’t wait!  Good luck if you get out there.