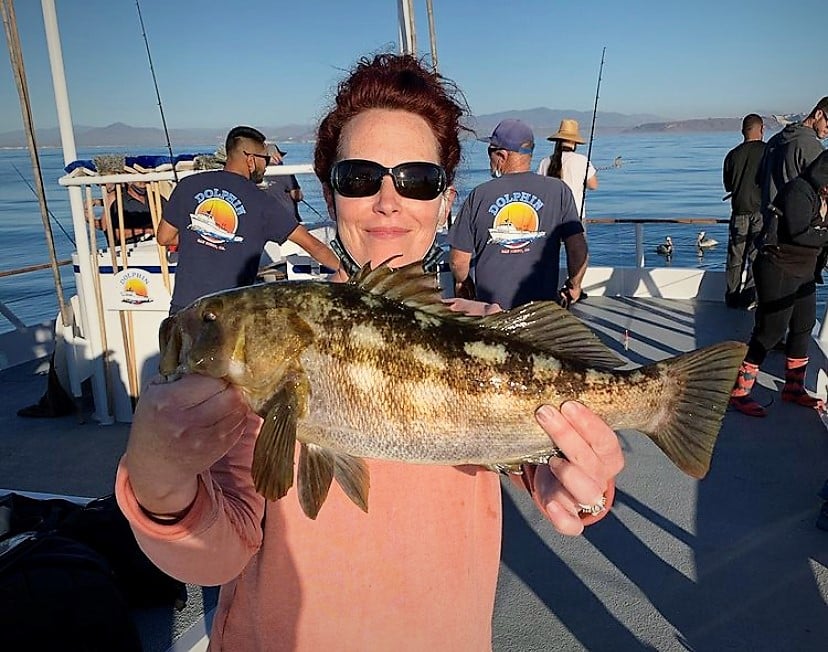 After last week’s hunting adventure in Mexico, I really wanted to get back on the water this last week.  I was able to get out a fair amount, but unfortunately, my results weren’t great.  Looking around SoCal though, there were some decent fishing opportunities going on.  With a little luck, you could have a good day. 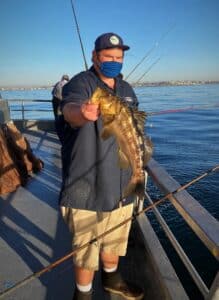 Mixed results up and down the coast, but with only a few boats going out right now, this is the dominant sportboat fishing activity right now.  I got out last Thursday (January 14th) on the afternoon ride of the New Del Mar with Capt. Danny Ericson (right).  I believe this boat is the only LA County boat running right now, so even in the middle of winter (crazy to say that when temperatures were high 80’s and even 90’s in some spots this last week), they are still running twice a day, with added twilight trips Fridays and Saturdays.  And they’re getting out with decent passenger loads!

I caught about 8 or 9 legal sculpin.  We started the trip targeting them, but even when we moved to target bass, I just caught more sculpin.  A couple of my rattlers were bigger models, making me think there might just be a bass on the other end…nope.  That said, the opportunity to catch some nice bass is definitely there. 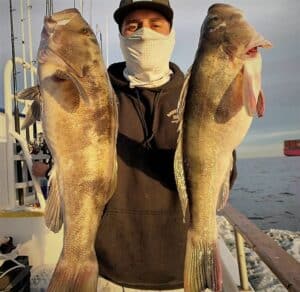 I’d really like to fish some of the reefs further down the coast, but without the San Pedro or Long Beach boats running, the only way to do that is to get on one of the Newport boats.  Angler Kevin Cho (left) is a regular on the on the Western Pride out of Newport Landing.  With all that fertile fishing ground to themselves, they seem to be doing pretty well.  I might have to find a way to get down there and check it out firsthand.

Down in San Diego, the Dolphin out of Fisherman’s Landing is getting out for winter bass fishing.  My buddy Capt. Tommie Miles rode last week and posted some nice pics from the boat (below).  Tommie told me he’s been having good luck using those Gitzem leadheads in red and white in 1/2 and 1-ounce sizes.  I’ve only ever found those in Ventura County shops as they are popular to use for seabass.  It might be easier to order them on eBay.

As a changeup, the Dolphin started doing their Halibut Derby trips on Wednesdays.  So far, the lead fish is only 8 pounds, so that competition is wide open. 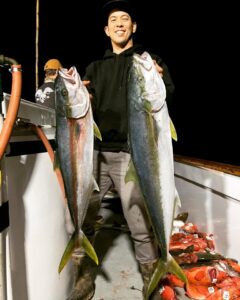 If you are longing for bigger action, you may want to consider one of the 1.5-day trips headed south to Colonet to fish the Northern Baja coast.  Those trips have been up and down.  The Pacific Queen scored big on their first one of the year with 90 yellowtail for 34 passengers.

Since then, the action has been kind of spotty.  Two weeks ago, the yellowtail didn’t want to go, but they ran into some bluefin.  This last weekend, my buddy Nick Lam was onboard and they scored 19 yellows for 33 anglers.  Luckily, since they’re down in Mexico, they do have rockfishing to fall back on.

Nick told me they saw fish, but there was no current so it was difficult getting them to go.  If you go, bring a 60# rig that you can use for a dropper or sinker rig.  You never know when those bluefin might pop up again.

That’s all for now.  While the fishing right now isn’t setting the world on fire, having just gotten back on the scene after being up north I’d like to share this perspective…

It’s a heck of a lot better than standing in a freezing river!