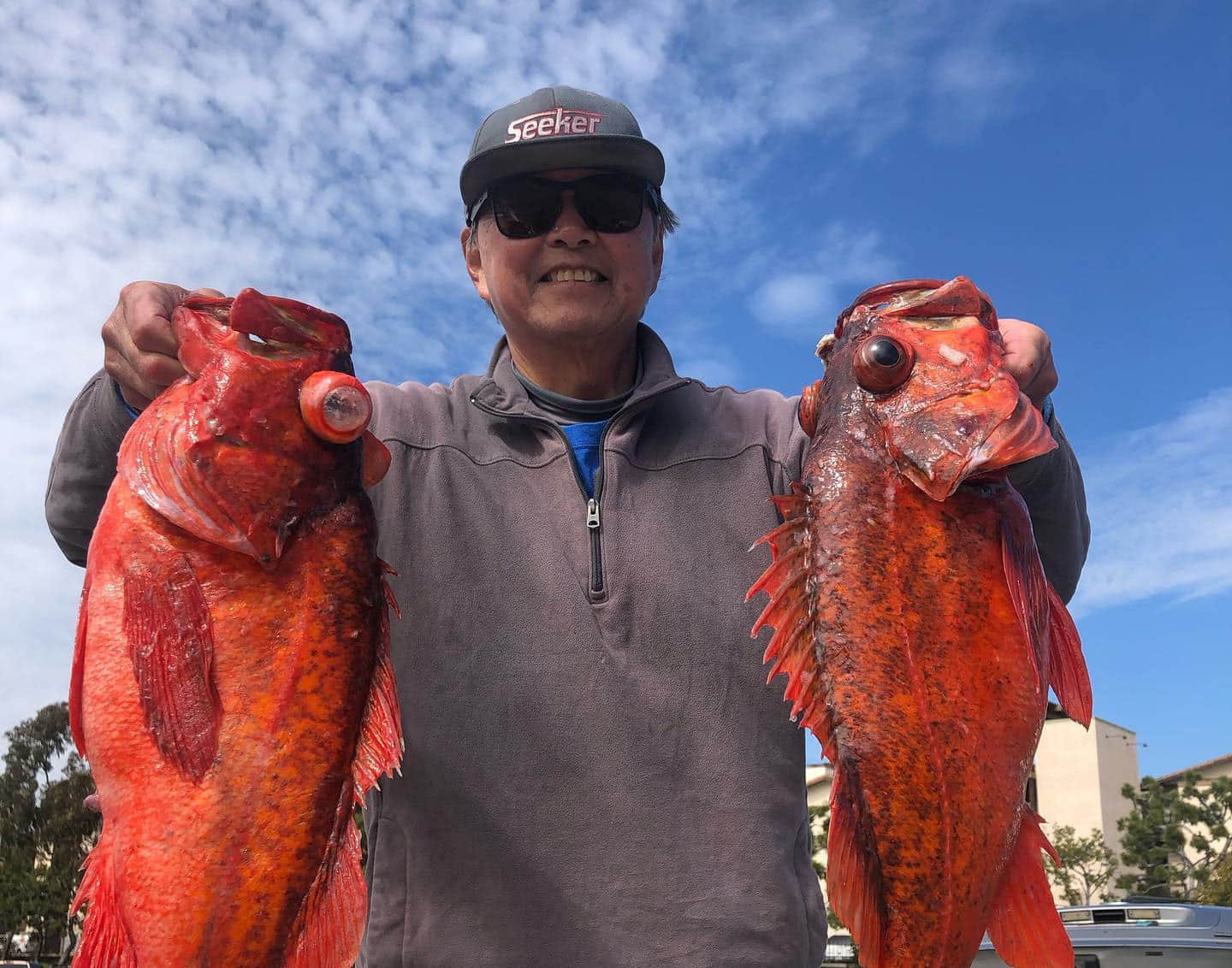 It’s been yet another week of mostly bad weather and things aren’t looking to promising for next week either. That being said, the weatherman definitely missed last weekend’s forecast by a mile.

They were calling for wind up north and outside, with calm weather along the beach and down south. Sounds like the guys up north had very fishable weather while we got rain and 15 plus knots of wind in San Diego Bay. This weekend’s forecast is looking similar with wind at the Channel Islands, Nic, SBI, and Clemente. Cat looks windy but fishable, the Coronado’s and the local banks looking good and more wind down in the 1 1/2-day zone.

As far as rockfish go, the best fishing continues to be happening up north. The coast and Channel Islands are forecast to get a lot of wind on Saturday which probably means the sport boats will be staying on the beach and the private boats will be staying on the trailer. Sunday looks a little better wind-wise but I’m sure that the crossing to the islands will be sub-optimal. As someone who had planned to fish out of Santa Barbara this weekend, take my advice and do it another day. San Nic has also been kicking out some quality rockfish for the boats making the long trek out there but with it forecast to blow 25-knots out there through Tuesday, I don’t think anyone will be getting in on that action soon.

My buddy Frank Wong fished there earlier this week and scored these nice reds.

The reds, along with a few yellowtail, have been biting for the boats fishing San Clemente Island lately but the weather is going to be a limiting factor for the overnight boats fishing there this weekend. It isn’t going to be horrible but it will be bad enough on the backside that I’d imagine most boats will be stacked up fishing rockfish on the east end. It’s going to be windy at Catalina on Saturday but Sunday looks pretty nice. The bass and bonito are biting there but most of the guys making the run are focusing on rockfish.

The San Diego out of Seaforth Landing has been catching yellowtail at the Coronado Islands this week. While the bite varies day to day, they did have 45 fish on their best day. These fish are all being found as sonar schools in deep water and are biting yo-yo jigs. There hasn’t been any surface sign of these fish, so anyone looking to head down there on their own boat is going to likely have a long and fruitless day of hunting. If you’re headed down to fish the San Diego or one of the other boats that’s online this weekend, Captain Ryan Bostian stressed the importance of using a reel with a large diameter spool like a Shimano Trinidad 40 or Penn 4/0 Senator when fishing the yo-yo jig. The large baitcasters that have become popular in recent years do not retrieve enough line per handle crank to properly present the lure. These fish want a fast-moving jig and you need a tall reel to do that.

This week’s final report comes from down south. There were several 1 1/2-day trips looking around down south over the weekend and all of them found bluefin tuna. Some of these boats were able to get the fish to respond to chum, a couple of them were able to actually get a bite and this one was landed aboard the American Angler. The weather doesn’t look too great down in that zone this weekend, but these fish will undoubtedly slide up the line and start biting at some point. Remember to check the weather forecast before heading out this weekend and if you find the wind blowing significantly harder than forecast act accordingly and don’t assume it will lay down.