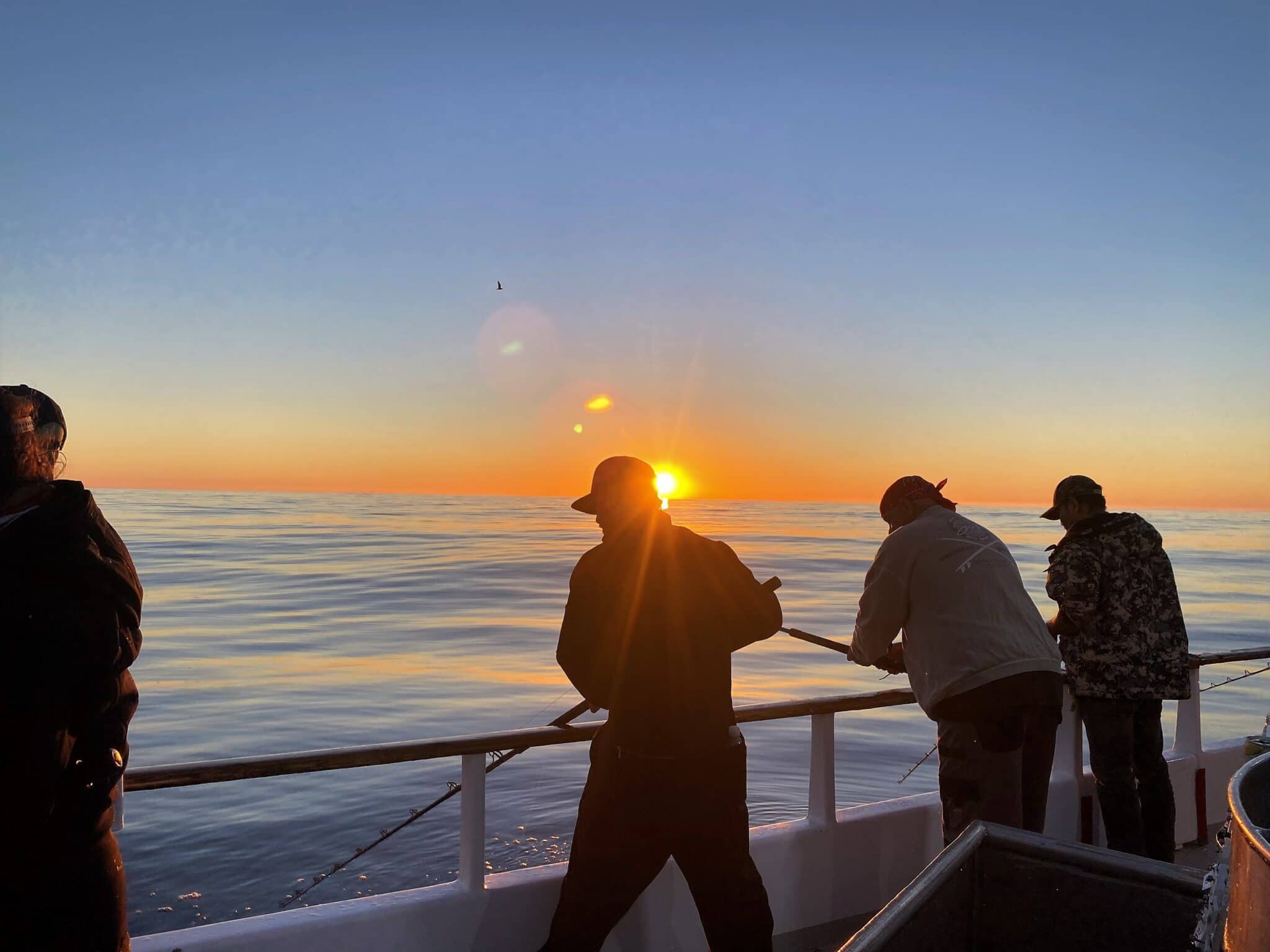 For the last few years now, I’ve led a sponsored trip with T-Bird Sportfishing out of Point Loma Sportfishing in San Diego in November as my last offshore trip of the season. This year’s sponsor was Fishing Syndicate who provided giveaways and raffle prizes for the anglers and crew.

Each trip has taken on it’s own distinctive character. Last year’s trip was all about the cow bluefin tuna caught mostly on the kite (3 of 4). This year’s trip was all about one-on-one battles with 100+ pound class bluefin hooked on heavy jigs and sinker rigs. Some ended happily. Most ended with disappointment. Each battle was hard fought where the successful combatants walked or swam away earning their particular outcome. Here are a couple individual stories from the trip.

This year’s trip departed on Friday night, November 12th and returned early Monday morning, November 15th. It would be the last trip of the year for the boat. I wrote recently about how the options at this point in the year were to either head south in search of warmer water and yellowfin tuna, or head out toward the Tanner and/or Cortes Banks to go for trophy size bluefin tuna. My gut was telling me we’d try to go big for at least the first day. Then depending upon the outcome, Tyler might consider fishing closer to home for Day 2 based on the abundance of life I saw and wrote about last week.

After departing the bait dock on Friday night, we headed north…seeming to confirm my impressions.

The fish are starting to migrate back down from the outer banks. We arrived on the Butterfly Bank, south of San Clemente Island early Saturday morning where the fleet was gathered. I got up around 2:30am and walked out on deck. I noticed the lights of other sportboats piercing the darkness ahead. This must be the target zone. About two hours later, we made our first stop of the day. Early on, my buddy Rob Tressler scored, on a flatfall-style jig deep.

He was fishing next to me when he got bit dropping in to almost 400 feet below. Rob’s jig got stopped on the fall. Rob started winding immediately and he quietly put that fish on deck without much effort. All of the jig’s hooks found a perch inside the mouth of the fish. One was in the gills and the fish was immediately damaged on hookup…explaining Rob’s easy go on it. It appeared to be maybe 120-ish.

It seemed like we were off to a good start, but that was the entire action of the morning. In the afternoon we went around looking and fished a few kelp paddies. That effort yielded one small yellowtail. We tried jigging for bluefin again that night without result.

Day 2 – One Of The Ones That Got Away

The next day started much like the first. We were up in the pre-dawn hours jigging deep again, but this time no fish to show for it.

Our fortunes took a big turn in our favor when we ran into a school that responded well to our chum and stuck to the boat for a few hours. Breaking fish could be seen in spots around the boat. Tyler said the meat of the school was filling his screen from about 240 to 340 feet down.

The prevalent presentation that was working was the sinker rig. I was fishing one on 80-pound using the Fishing Syndicate Offshore 76XH (40-80) and a Penn Fathom 40 two-speed. I had a bump that stole my bait at the onset of the bite, but it didn’t find the hook.

Shortly after, I was back in when Jon Takara (right) of Santa Clara (Bay Area) connected on a sinker rig. The fish took Jon around the boat, resulting in a macrame of lines hung up on his. I was in that mess and spectated through to the final outcome in free spool. Ugh. At least he got his fish. His hook was barely hanging on in the corner of the fish’s mouth when it hit the deck.

The deckhands were forced to cut the resulting tangle of braided line in the aftermath. I lost probably 100 feet of braid and the use of that setup for the time being.

The bite was still hot and Rob offered to let me use his 80-pound sinker setup that was ready to go. I gladly accepted. I picked a hot bait and dropped back in. Capt. Tyler said he was still marking fish at around 240 feet. I did a controlled drop to around 200 feet, and then barely engaged the drag so that the bait was slowly making it’s way down through the water column. I was posted at the rail about a third of the way up on the starboard drift side, when I started getting attention.

Fresh one. Line is screaming off the reel and the fish takes off from the back of the boat. I followed it around the bait tank and found myself in the port stern corner as my line scoped out into the distance. It ripped line out blowing past halfway on the spool until the fish finally let up and I could begin to gain some line back…kicking off a fight that lasted for about an hour.

I stayed there in the corner until it came back in by the boat, but still deep below the surface. It started to slowly work me toward the bow. I followed it up and around the anchor and settled in under Tyler’s starboard window for the final phase of the fight. At this point, it was starting to do wide death circles. I was in my rail crouch slowly gaining line to what I hoped would be a successful final outcome. It got to deep color. Tyler said he could see it on his up/down at a depth of about 70 feet. Rob was next to me on my left interested to watch me on this fish with a rod he had built himself. Deckhand Chris was to my right, gaff at the ready. They all saw the fish and said it was a good one. I couldn’t see it myself because I was crouched down beneath the rail to lever the fish up.

And then BINK! The braid snapped and the fish swam off.

Tough break…literally. Everyone witness to the final conclusion was perplexed. I didn’t think that the line rubbed the hull at any point. Rob said the braid was only 2 years old, and had never been tested on a big fish. I found yet another way to lose a bluefin. Story of my year with this species.

Before my encounter with that fish, my surf-fishing buddy Richard Kyo had gotten bit. Richard and I both participate in a surf fishing group on Facebook. We met live for the first time about a month ago when we both rode on the Malahini for a full day offshore trip. He’s new to this style of fishing and had never caught a tuna prior to the trip.

Rich was on it for awhile before tangling with other anglers on the stern. Apparently his line got compromised and that fish eventually broke him off. Undeterred, he got himself re-rigged and back in the game. While I was fighting my fish, he got bit again.

After my fight came to it’s unfortunate conclusion, I needed to take a break for awhile. I had some breakfast, then went back out on deck. I found Richard in that same port corner in what appeared to be the final stages of fighting his second fish. I was happy that he didn’t hesitate to re-engage in the bite and got another opportunity. I stopped to watch him.

This time Richard’s fight came to a successful conclusion.

We continued to fish well into the evening, but that morning bite ended up being it for the trip.

Final tally…3 fish caught on 13 hookups over both fishing days. A lot of hard effort. A lot of heartache. A significant portion of the 14 anglers that came out had at least one opportunity. These were trophy-sized fish. Collectively, we didn’t make the most of the opportunities we had, but the hook-to-land ratio is never that great when you’re talking about big bluefin.

Thanks to Capt. Tyler and his excellent crew. You guys did a great job. Enjoy your holidays and time away from the boat. I’ll see you next year.

That’s likely it for me offshore until next year. Hopefully, these fish hang around and I get more opportunities to land a big one. I picked up some new knowledge along the way that I can hopefully leverage to finally getting a trophy the next time I get a chance. Good luck if you get out there.